Here’s 10 charts and maps that will help prepare your brain for what may come this evening.

1. Media “Consensus” is a Clinton Victory

It’s been a roller coaster over recent months, but the media “consensus” view is that Clinton has the best odds at winning the race. The above chart from Josh Katz plots the chance of a Clinton victory over the last three months according to various publications. As we all saw in June, polling numbers are not to be trusted.

Even though the consensus view seems to be a Clinton victory, renowned statistician Nate Silver gives us significantly different odds. According to his website, the chance of a Trump victory is at roughly 28% as we head into Election Day.

The philosophy behind 538 is: Prove it. Doesn't mean we can't be wrong (we're wrong all the time). But prove it. Don't be lazy.

And especially don't be lazy when your untested assumptions happen to validate your partisan beliefs.

3. The Trump Path to Victory

While a Trump victory is less likely, if it were to happen it may look something like this: 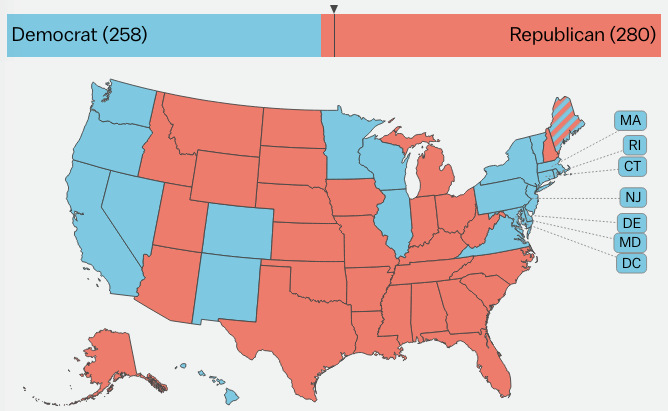 To stand a chance, Trump has to take Iowa, Ohio, Arizona, Florida, and North Carolina. That would get him to 259 electoral votes.

Then he’d need to find 11 votes elsewhere: winning one of Pennsylvania, Michigan, or Virginia would work. However, he has trailed in polls in these three states for months. Trump and Clinton appeal to different groups of people.

For Trump to succeed, he will need working class whites to show up in droves at polling stations, and to somehow find cross-over appeal from other voting blocs.

Clinton will also need a strong turnout from the growing share of Hispanic voters in the country. This is especially important in states like Arizona, Florida, and New Mexico. Obama’s approval rating is at its highest point in years, and this could end up being a deciding factor in mobilizing enough voters for Clinton. Voter turnout in the 2012 election was low in comparison to other developed countries.

The question is: will it be higher in 2016, and who does this benefit the most? Maybe turnout will be high because of the “lesser evil” vote. After all, these are two of the most disliked candidates in history.

By the way, the above numbers are from summer 2016 – before the “lewd conversation” incident, the additional Trump sexual assault accusations, the release of most of the Podesta emails, and the re-opening (and re-closing) of Clinton’s FBI case.

No matter who wins, the country will remain very divided over the near future. There will likely be a significant amount of disgruntled people in practically every state.

With the hype around the election, one would guess that the respective campaigns of Clinton and Trump would be destined for the record books.

However, that’s simply not the case: The above chart by Max Galka shows normalized campaign finance history since 1960.

Clinton spent less than Obama did for either of his campaigns, and Trump was outspent by each of the last four Republican campaigns (Romney, McCain, and G.W. Bush 2x).

How Did the Media and Pollsters Get the Election So Wrong?

How Does the U.S. Stock Market Perform in Election Years?