One Year In: Visualizing Key Events in the COVID-19 Timeline

It’s been a long and eventful year since COVID-19 was officially declared a global pandemic by the World Health Organization (WHO) on March 11, 2020.

The tangible and intangible costs of COVID-19 have been severe. In this visual COVID-19 timeline, we delve into some significant milestones that have occurred around the world.

The origin story actually begins at the turn of the new year, as events began bubbling under the surface in Wuhan, China. The first coronavirus cluster was reported on December 31, 2019, with initial exposures linked to the Huanan Seafood Market.

In the new year, the first coronavirus cases began filtering outside of China, to Thailand and the U.S.—causing the WHO to declare a public health emergency of international concern. As the death toll ticked up to over 200, it was clear that this was no ordinary virus. All dates in the graphic are based on when events occurred rather than when they were widely reported.

In February 2020, the novel coronavirus was finally named COVID-19. In addition, the Diamond Princess cruise ship was linked to 624 confirmed cases in late February—the highest case cluster outside of China at the time. The ship captured international headlines when it was refused port in a number of countries, casting COVID-19 into the spotlight.

This month also marked a significant turning point. Dr. Li Wenliang, a Chinese doctor, had tried to draw global attention to the severity of China’s outbreak before he passed of COVID-19 on February 7, 2020.

If the officials had disclosed information about the epidemic earlier I think it would have been a lot better […] There should be more openness and transparency.
—Dr. Li, in a NYT interview a few days before his passing

Italy and Iran then grew significantly as global hotspots of COVID-19. The U.S. reported its first death due to COVID-19—however, it was only discovered in April that there were in fact two prior deaths due to the virus in the country.

On March 11, 2020, WHO made a critical decision. As the virus began to transcend borders and claim thousands of lives, it announced that the COVID-19 outbreak had officially become a deadly global pandemic.

In the year that followed, the virus was relentless in spreading around the world. How have cumulative case counts and death tolls evolved since the beginning?

Source: Our World in Data via Johns Hopkins University

Let’s explore key events in the COVID-19 timeline that took place over the course of the past year.

365 Days of the Pandemic

The initial impacts of the pandemic were felt swiftly, and progressively became worse. Within the first three months, the world paid a high human and economic toll.

Whiplash for the World

Following the WHO announcement, numerous sporting events were cancelled, from the NBA and NHL 2019-2020 seasons to the UEFA Euro men’s soccer championship. Even the Tokyo Summer Olympics were postponed for a year.

In late March 2020, the U.S. surpassed China to become the hardest-hit country by COVID-19. In terms of overall case numbers, it remains the global epicenter of the pandemic today, followed by India and Brazil.

The stock market took a severe hit, with a crash rivaling other recessions and significant financial crises. For example, here’s how the Dow Jones Index Average dropped in March alone:

Stock markets re-entered a bull market in April, but the damage had already been done. The S&P 500, for example, would only return to pre-pandemic levels in August.

The onset of the pandemic led to additional economic chaos. The price of oil flipped negative in April, and over 10 million Americans lost their jobs in the sudden downturn.

To help prop up the economy, the U.S. unveiled the $2 trillion CARES Act, the largest economic stimulus package in history—near 10% of national gross domestic product.

Multiple countries locked down their borders to the rest of the world, from the European Union to India. These travel bans and reduced mobility affected not just airline revenues, but temporarily had a noticeable effect on carbon emissions too.

Numbers kept rising over the next six months, following the shifting geography of COVID-19 into densely populated regions such as Africa, South Asia, and the Middle East. In a controversial move, Brazil stopped making its COVID-19 case data public starting June 7, 2020.

Global deaths due to COVID-19 surpassed half a million at the end of June—and jumped to over 1 million by the end of September. Another heartbreaking record was set in mid-October when global cases leapt up by 1 million in just three days.

At the very end of 2020, some optimism for things going back to normal was restored when Moderna announced the very first vaccine candidate, followed by Pfizer/BioNTech.

However, more alarm was raised as reports of a faster-spreading, more infectious strain of COVID-19 emerged from the UK. Two more variants have also since been discovered:

*Note: P.1 was first detected in Japan but traced back to Brazil

In January 2021, WHO organized an international scientific consultation around these variants. The good news? Existing and emerging vaccines will still potentially provide adequate protection against these variants.

In March 2021, the U.S. Congress approved President Biden’s $1.9 trillion pandemic relief bill. Some details of the money breakdown include:

An End in Sight for the COVID-19 Timeline?

With the global vaccine rollout now underway, many more key vaccine producers, from AstraZeneca/Oxford University to Johnson & Johnson, have joined in the fight to return life to normal.

Although there have been deep losses due to COVID-19, many hope that we’ll learn from the lessons of this past year, and emerge stronger than ever.

We have come so far, we have suffered so much and we have lost so many. We cannot, we must not squander the progress we have made… Science, solutions and solidarity remain our guide. There are no short-cuts.—Dr. Tedros Adhanom Ghebreyesus, Director-General of WHO

Correction: In a previous version of the graphic, Russian Prime Minister, Mikhail Mishustin, was incorrectly listed as President.

COVID-19 Vaccine Doses: Who’s Got At Least One?

Despite tackling the same disease, vaccines and antiviral pills work differently to combat COVID-19. We visualize how they work in the body. 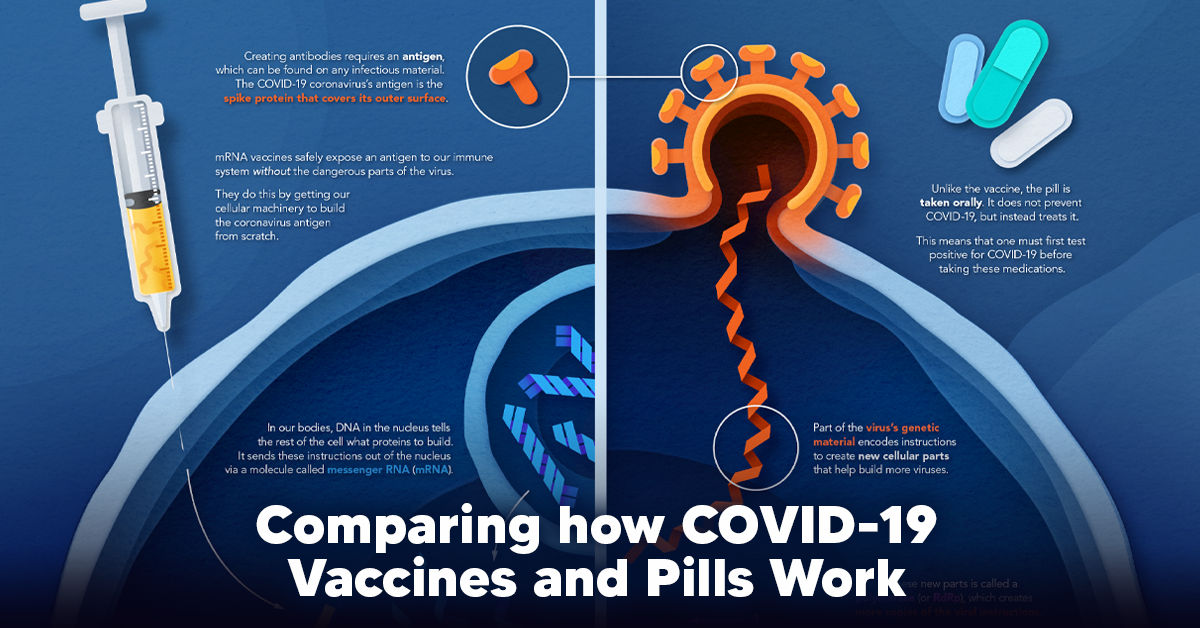 Since the pandemic started in 2020, a number of therapies have been developed to combat COVID-19.

The leading options for preventing infection include social distancing, mask-wearing, and vaccination. They are still recommended during the upsurge of the coronavirus’s latest mutation, the Omicron variant.

But in December 2021, The United States Food and Drug Administration (USDA) granted Emergency Use Authorization to two experimental pills for the treatment of new COVID-19 cases.

These medications, one made by Pfizer and the other by Merck & Co., hope to contribute to the fight against the coronavirus and its variants. Alongside vaccinations, they may help to curb extreme cases of COVID-19 by reducing the need for hospitalization.

Despite tackling the same disease, vaccines and pills work differently:

How a Vaccine Helps Prevent COVID-19

The main purpose of a vaccine is to prewarn the body of a potential COVID-19 infection by creating antibodies that target and destroy the coronavirus.

In order to do this, the immune system needs an antigen.

It’s difficult to do this risk-free since all antigens exist directly on a virus. Luckily, vaccines safely expose antigens to our immune systems without the dangerous parts of the virus.

In the case of COVID-19, the coronavirus’s antigen is the spike protein that covers its outer surface. Vaccines inject antigen-building instructions* and use our own cellular machinery to build the coronavirus antigen from scratch.

When exposed to the spike protein, the immune system begins to assemble antigen-specific antibodies. These antibodies wait for the opportunity to attack the real spike protein when a coronavirus enters the body. Since antibodies decrease over time, booster immunizations help to maintain a strong line of defense.

*While different vaccine technologies exist, they all do a similar thing: introduce an antigen and build a stronger immune system.

Antiviral pills, unlike vaccines, are not a preventative strategy. Instead, they treat an infected individual experiencing symptoms from the virus.

Two drugs are now entering the market. Merck & Co.’s Lagevrio®, composed of one molecule, and Pfizer’s Paxlovid®, composed of two.

These medications disrupt specific processes in the viral assembly line to choke the virus’s ability to replicate.

The Mechanism of Molnupiravir

RNA-dependent RNA Polymerase (RdRp) is a cellular component that works similar to a photocopying machine for the virus’s genetic instructions. An infected host cell is forced to produce RdRp, which starts generating more copies of the virus’s RNA.

Molnupiravir, developed by Merck & Co., is a polymerase inhibitor. It inserts itself into the viral instructions that RdRp is copying, jumbling the contents. The RdRp then produces junk.

The Mechanism of Nirmatrelvir + Ritonavir

A replicating virus makes proteins necessary for its survival in a large, clumped mass called a polyprotein. A cellular component called a protease cuts a virus’s polyprotein into smaller, workable pieces.

Pfizer’s antiviral medication is a protease inhibitor made of two pills:

With a faulty polymerase or a large, unusable polyprotein, antiviral medications make it difficult for the coronavirus to replicate. If treated early enough, they can lessen the virus’s impact on the body.

The Future of COVID Antiviral Pills and Medications

Antiviral medications seem to have a bright future ahead of them.

COVID-19 antivirals are based on early research done on coronaviruses from the 2002-04 SARS-CoV and the 2012 MERS-CoV outbreaks. Current breakthroughs in this technology may pave the way for better pharmaceuticals in the future.

One half of Pfizer’s medication, ritonavir, currently treats many other viruses including HIV/AIDS.

Gilead Science is currently developing oral derivatives of remdesivir, another polymerase inhibitor currently only offered to inpatients in the United States.

More coronavirus antivirals are currently in the pipeline, offering a glimpse of control on the looming presence of COVID-19.

Author’s Note: The medical information in this article is an information resource only, and is not to be used or relied on for any diagnostic or treatment purposes. Please talk to your doctor before undergoing any treatment for COVID-19. If you become sick and believe you may have symptoms of COVID-19, please follow the CDC guidelines.