Small businesses are the backbone of the U.S. economy, employing nearly half of the private sector workforce.

Unfortunately, lockdown and work-from-home measures brought about by COVID-19 have disproportionately affected small businesses – particularly in the leisure and hospitality sectors.

As metro-level data from Opportunity Insights points out, geography makes a great deal of difference in the proportion of U.S. small businesses that have flipped their open sign. While some cities are mostly back to business as usual, others are in a situation where the majority of small businesses are still shuttered.

In the U.S. as a whole, data suggests that nearly a quarter of all small businesses remain closed. Of course, the situation on the ground differs from place to place. Here’s how cities around the country are doing, sorted by percentage of small businesses closed as of September 2020:

New Orleans and the Bay Area are still experiencing rates of small business closures that are almost double the national median.

Small businesses in the leisure and hospitality sector have been particularly hard hit, with 37% reporting no transaction data.

Getting Back to Business

Some cities are seeing rates of small business operation that are nearing pre-pandemic levels.

Of the cities covered in the data set, Omaha had the highest rate of small businesses open.

In cities with a large technology sector, such as San Francisco and Austin, COVID-19 is shaking up the economic patterns as entire companies switched to remote working almost overnight. This is bad news for the constellation of restaurants and services that cater to those workers.

Likewise, cities that have an economy built around serving visitors – Honolulu and New Orleans, for example – have seen a very high rate of small business closures as vacations and conferences have been paused indefinitely.

As the pandemic drags on, many of these temporary closures are looking to be permanent. Yelp recently reported that of the restaurants marked as closed on their platform, 61% are shut down permanently. As well, businesses in the retail and nightlife categories also saw more than half of closures become permanent.

In Remembrance of Revenue

A business being completely closed is a definitive measure, but it doesn’t tell the whole story. Even for businesses that remained open, revenue is often far below pre-pandemic rates.

Once again, businesses in the leisure and hospitality sector have been hit the hardest, with revenue falling by almost half since the beginning of 2020.

At present, it’s hard to predict when, or even if, economic activity will completely recover. Though travel and some level of in-office work will eventually ramp back up, the small business landscape will continue to face major upheaval in the meantime.

The Biggest Business Risks in 2021

We live in an increasingly volatile world, where change is the only constant. Which are the top ten business risks to watch out for? The Biggest Business Risks Around the World

We live in an increasingly volatile world, where change is the only constant.

Businesses, too, face rapidly changing environments and associated risks that they need to adapt to—or risk falling behind. These can range from supply chain issues due to shipping blockages, to disruptions from natural catastrophes.

As countries and companies continue to grapple with the effects of the pandemic, nearly 3,000 risk management experts were surveyed for the Allianz Risk Barometer, uncovering the top 10 business risks that leaders must watch out for in 2021.

Business Interruption tops the charts consistently as the biggest business risk. This risk has slotted into the #1 spot seven times in the last decade of the survey, showing it has been on the minds of business leaders well before the pandemic began.

However, that is not to say that the pandemic hasn’t made awareness of this risk more acute. In fact, 94% of surveyed companies reported a COVID-19 related supply chain disruption in 2020.

Note: Figures do not add to 100% as respondents could select up to three risks per industry.

Pandemic Outbreak, naturally, has climbed 15 spots to become the second-most significant business risk. Even with vaccine roll-outs, the uncontrollable spread of the virus and new variants remain a concern.

The third most prominent business risk, Cyber Incidents, are also on the rise. Global cybercrime already causes a $1 trillion drag on the economy—a 50% jump from just two years ago. In addition, the pandemic-induced rush towards digitalization leaves businesses increasingly susceptible to cyber incidents.

The top three risks mentioned above are considered the “pandemic trio”, owing to their inextricable and intertwined effects on the business world. However, these next few notable business risks are also not far behind.

Globally, GDP is expected to recover by +4.4% in 2021, compared to the -4.5% contraction from 2020. These Market Developments may also see a short-term 2 percentage point increase in GDP growth estimates in the event of rapid and successful vaccination campaigns.

In the long term, however, the world will need to contend with a record of $277 trillion worth of debt, which may potentially affect these economic growth projections. Rising insolvency rates also remain a key post-COVID concern.

Persisting traditional risks such as Fires and Explosions are especially damaging for manufacturing and industry. For example, the August 2020 Beirut explosion caused $15 billion in damages.

What’s more, Political Risks And Violence have escalated in number, scale, and duration worldwide in the form of civil unrest and protests. Such disruption is often underestimated, but insured losses can add up into the billions.

No Such Thing as a Risk-Free Life

The risks that businesses face depend on a multitude of factors, from political (in)stability and growing regulations to climate change and macroeconomic shifts.

Will a post-pandemic world accentuate these global business risks even further, or will something entirely new rear its head?

RCEP Explained: The World’s Biggest Trading Bloc Will Soon be in Asia-Pacific

The Regional Comprehensive Economic Partnership (RCEP) covers 30% of global GDP and population. Here’s everything you need to know about it. 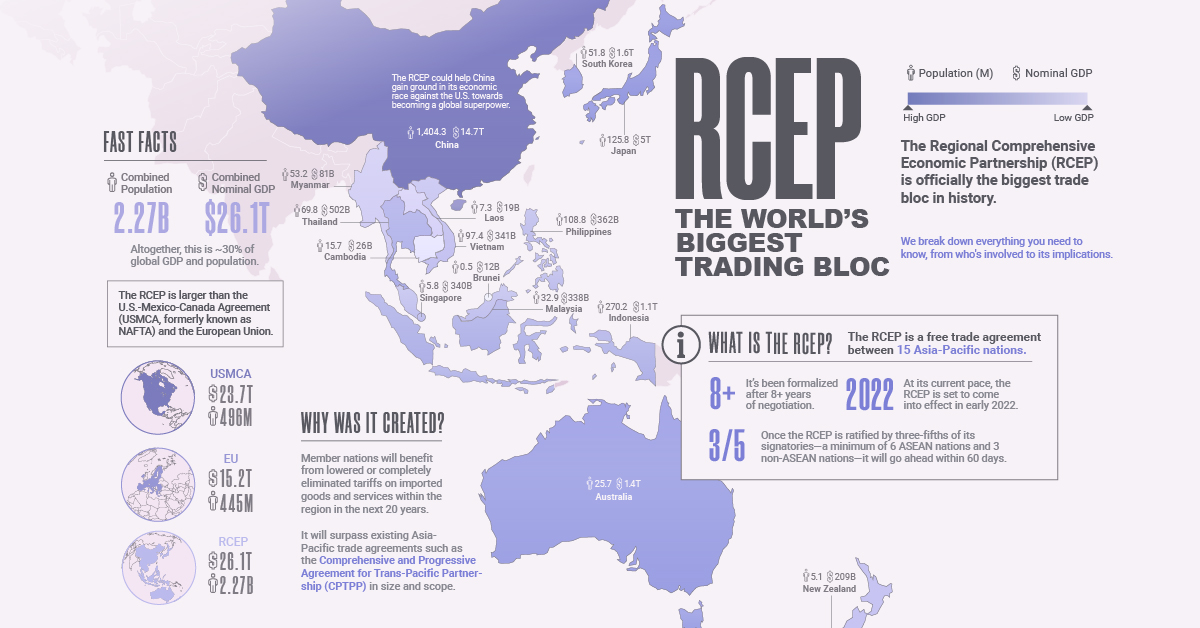 Trade and commerce are the lifeblood of the global economy. Naturally, agreements among nations in a certain geographical area help facilitate relationships in ways that are ideally beneficial for everyone involved.

In late 2020, the Regional Comprehensive Economic Partnership (RCEP) was signed, officially creating the biggest trade bloc in history. Here, we break down everything you need to know about it, from who’s involved to its implications.

Who’s in the RCEP, and Why Was it Created?

The RCEP is a free trade agreement between 15 nations in the Asia-Pacific region, and has been formalized after 28 rounds of discussion over eight years.

Member nations who are a part of the RCEP will benefit from lowered or completely eliminated tariffs on imported goods and services within the region in the next 20 years. Here are the countries which have signed on to be member nations:

But there is still some work to do to bring the trade agreement into full effect.

Signing the agreement, the step taken in late 2020, is simply an initial show of support for the trade agreement, but now it needs to be ratified. That means these nations still have to give their consent to be legally bound to the terms within the RCEP. Once the RCEP is ratified by three-fifths of its signatories—a minimum of six ASEAN nations and three non-ASEAN nations—it will go ahead within 60 days.

So far, it’s been ratified by China, Japan, Thailand, and Singapore as of April 30, 2021. At its current pace, the RCEP is set to come into effect in early 2022 as all member nations have agreed to complete the ratification process within the year.

Interestingly, in the midst of negotiations in 2019, India pulled out of the agreement. This came after potential concerns about the trade bloc’s impacts on its industrial and agricultural sectors that affect the “lives and livelihoods of all Indians”. India retains the option to rejoin the RCEP in the future, if things change.

When we say the Regional Comprehensive Economic Partnership is the biggest trade bloc in history, this statement is not hyperbole.

The RCEP will not only surpass existing Asia-Pacific trade agreements such as the Comprehensive and Progressive Agreement for Trans-Pacific Partnership (CPTPP) in size and scope, but also other key regional partnerships in advanced economies.

This includes the European Union and the U.S.-Mexico-Canada Agreement (USMCA, formerly known as NAFTA). How does the trio stack up?

With the combined might of its 15 signatories, the RCEP accounts for approximately 30% of global GDP and population. Interestingly, the total population covered within the RCEP is near or over five times that of the other trade blocs.

Another regional agreement not covered here is the African Continental Free Trade Area (AfCFTA), which is now the largest in terms of participating countries (55 in total), but in the other metrics, the RCEP still emerges superior.

The potential effects of the RCEP are widespread. Among others, the agreement will establish rules for the region around:

However, there are some key exclusions that have raised critics’ eyebrows. These are:

The RCEP could also help China gain even more ground in its economic race against the U.S. towards becoming a global superpower.

Last, but most importantly, Brookings estimates that the potential gains from the RCEP are in the high billions: $209 billion could be added annually to world incomes, and $500 billion may be added to world trade by 2030.