Animation: How the Demographics of China and India are Diverging

How the Demographics of China and India are Diverging

Within popular discourse, especially in the West, the profiles of China and India have become inextricably linked.

Aside from their massive populations and geographical proximity in Asia, the two nations also have deep cultural histories and traditions, growing amounts of influence on the world stage, and burgeoning middle classes.

China and India combine to be home to one-third of the world’s megacities, and they even had identical real GDP growth rates of 6.1% in 2019, based on early estimates by the IMF.

But aside from the obvious differences in their political regimes, the two populous nations have also diverged in another way: demographics.

As seen in today’s animation, which comes from AnimateData and leverages data from the United Nations, the two countries are expected to have very different demographic compositions over time as their populations age.

The easiest way to see this is through a macro lens:

Although the countries have roughly the same populations today — by 2050, India will add roughly 270 million more citizens, and China’s total will actually decrease by 30 million people.

Let’s look at the demographic profiles of these countries to break things down further. We’ll do this by charting populations of age groups (0-14 years, 15-24 years, 25-64 years, and 65+ years).

China’s one-child policy was implemented in 1979 — and although it became no longer effective starting in 2016, there’s no doubt that the long-term demographic impacts of this drastic measure will be felt for generations:

The first thing you’ll notice in the above chart is that China’s main working age population cohort (25-64 years) has essentially already peaked in size.

Further, you’ll notice that the populations of children (0-14 years) and young adults (15-24 years) have both been on the decline for decades.

A reduction in births is something that happens naturally in a demographic transition. As an economy becomes more developed, it’s common for fertility rates to decrease — but in China’s case, it has happened prematurely through policy. As a result, the country’s age distribution doesn’t really fit a typical profile.

India: A Workforce Peaking in 2050

Meanwhile, projections have India reaching a peak workforce age population near the year 2050:

By the year 2050, it’s estimated that India’s workforce age population will be comparable in size to that of China’s today — over 800 million people strong.

However, given that this is at least 30 years in the future, it raises all kinds of questions around the economic relevance of a “working age” population in a landscape potentially dominated by technologies such as artificial intelligence and automation.

While it’s clear that the world’s two most populous countries have some key similarities, they are both on very different demographic paths at the moment.

China’s population has plateaued, and will eventually decline over the remainder of the 21st century. There is plenty of room to grow economically, but the weight of an aging population will create additional social and economic pressures. By 2050, it’s estimated that over one-third of the country will be 60 years or older.

On the other hand, India is following a more traditional demographic path, as long as it is uninterrupted by drastic policy decisions. The country will likely top out at 1.6-1.7 billion people, before it begins to experience the typical demographic transition already experienced by more developed economies in North America, Europe, and Japan.

And by the time the Indian workforce age group hits 800+ million people, it will be interesting to see how things interplay with the world’s inevitable technological shift to automation and a changing role for labor.

Related Topics:chinaindiademographicspopulationagingpopulation pyramids
Up Next

The Problem of an Aging Global Population, Shown by Country

How Chinese Financing is Fueling Megaprojects Around the World 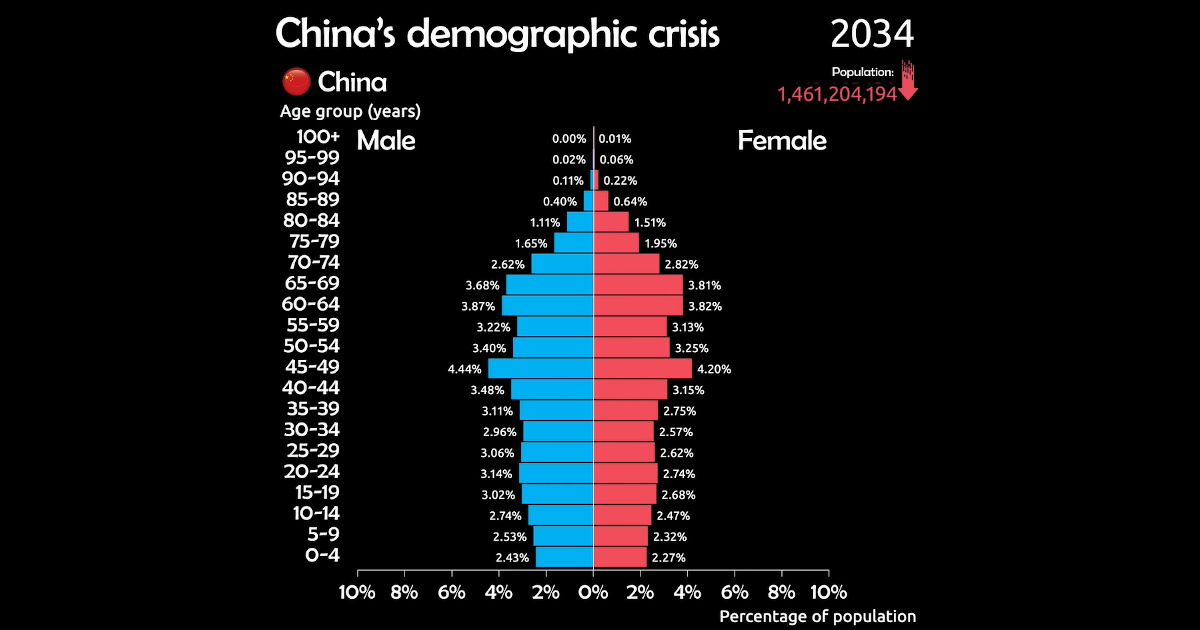