Visualizing the Impact of Rising Sea Levels, by Country

Here’s a look at how people around the world could be impacted by coastal flooding by 2100, based on rising sea level projections. Climate change is already causing sea levels to rise across the globe. In the 20th century alone, it’s estimated that the mean global sea level rose by 11-16 cm.

How much will sea levels change in the coming years, and how will it affect our population?

In the below series of visualizations by Florent Lavergne, we can see how rising sea levels could impact countries in terms of flood risk by the year 2100.

Which countries will be most severely affected by rising sea levels?

If things continue as they are, roughly 360 million people around the world could be at risk of annual flood events by 2100. Here’s what those figures look like across each region: On the continent of Africa, one of the countries with the highest number of people at risk of coastal flooding is Egypt.

Over 95% of Egypt’s population lives along the Nile river, with some areas situated at extremely low elevations. The country’s lowest point is 133 m below sea level. Asia’s population will be more heavily impacted by flooding than any other region included in the dataset.

According to the projections, 70% of the people that will be affected by rising sea levels are located in just eight Asian countries: China, Bangladesh, India, Vietnam, Indonesia, Thailand, the Philippines, and Japan. 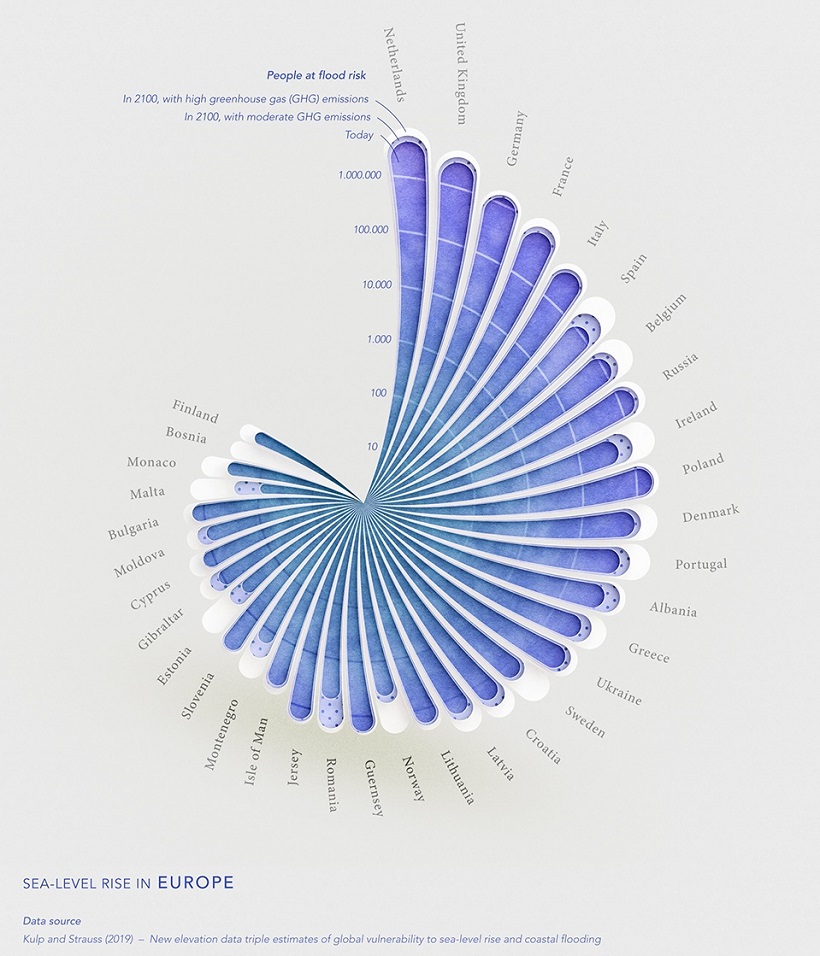 One of the most high-risk populations in Europe is the Netherlands. The country has a population of about 17 million, and as of 2019, about half of its population lives in areas below sea level. In North America, the U.S., Canada, and Mexico are expected to see the highest numbers of impacted people, due to the size of their populations.

But as a percentage of population, other countries in Central America and the Caribbean are more greatly at risk, especially in high emission scenarios. One country worth highlighting is the Bahamas. Even based on moderate emission levels, the country is expected to see a significant surge in the number of people at risk of flood.

According to the World Bank, this is because land in the Bahamas is relatively flat, making the island especially vulnerable to sea level rises and flooding. As South America’s largest country by population and with large coastal cities, Brazil‘s population is the most at risk for flood caused by rising sea levels.

Notably, thanks to a lot of mountainous terrain and municipalities situated on high elevation, no country in South America faces a flood risk impacting more than 1 million people. By 2100, Polynesian countries like Tonga are projected to see massive increases in the number of people at risk of flooding, even at moderate GHG emissions.

According to Reuters, sea levels in Tonga have been rising by 6 mm each year, which is nearly double the average global rate. The reason for this is because the islands sit in warmer waters, where sea level changes are more noticeable than at the poles.

Since 1975, average temperatures around the world have risen 0.15 to 0.20°C each decade, according to research by NASA.

This global heating has caused polar ice caps to begin melting—in just over two decades, we’ve lost roughly 28 trillion tonnes of our world’s ice. Over that same timeframe, global sea levels have risen by an average of 36 mm. These rising sea levels pose a number of risks, including soil contamination, loss of habitat, and flooding.

As countries are affected by climate change in different ways, and at different levels, the question becomes how they will respond in turn.

What Are the Five Major Types of Renewable Energy?

Renewable energy is the foundation of the ongoing energy transition. What are the key types of renewable energy, and how do they work? Awareness around climate change is shaping the future of the global economy in several ways.

Governments are planning how to reduce emissions, investors are scrutinizing companies’ environmental performance, and consumers are becoming conscious of their carbon footprints. But no matter the stakeholder, energy generation and consumption from fossil fuels is one of the biggest contributors to emissions.

Therefore, renewable energy sources have never been more top-of-mind than they are today.

The Five Types of Renewable Energy

Renewable energy technologies harness the power of the sun, wind, and heat from the Earth’s core, and then transforms it into usable forms of energy like heat, electricity, and fuel.

The above infographic uses data from Lazard, Ember, and other sources to outline everything you need to know about the five key types of renewable energy:

Editor’s note: We have excluded nuclear from the mix here, because although it is often defined as a sustainable energy source, it is not technically renewable (i.e. there are finite amounts of uranium).

Though often out of the limelight, hydro is the largest renewable electricity source, followed by wind and then solar.

Together, the five main sources combined for roughly 28% of global electricity generation in 2021, with wind and solar collectively breaking the 10% share barrier for the first time.

The levelized cost of energy (LCOE) measures the lifetime costs of a new utility-scale plant divided by total electricity generation. The LCOE of solar and wind is almost one-fifth that of coal ($167/MWh), meaning that new solar and wind plants are now much cheaper to build and operate than new coal plants over a longer time horizon.

With this in mind, here’s a closer look at the five types of renewable energy and how they work.

Wind turbines use large rotor blades, mounted at tall heights on both land and sea, to capture the kinetic energy created by wind.

When wind flows across the blade, the air pressure on one side of the blade decreases, pulling it down with a force described as the lift. The difference in air pressure across the two sides causes the blades to rotate, spinning the rotor.

The rotor is connected to a turbine generator, which spins to convert the wind’s kinetic energy into electricity.

Solar technologies capture light or electromagnetic radiation from the sun and convert it into electricity.

A solar system’s ability to generate electricity depends on the semiconductor material, along with environmental conditions like heat, dirt, and shade.

Geothermal energy originates straight from the Earth’s core—heat from the core boils underground reservoirs of water, known as geothermal resources.

Geothermal plants typically use wells to pump hot water from geothermal resources and convert it into steam for a turbine generator. The extracted water and steam can then be reinjected, making it a renewable energy source.

Similar to wind turbines, hydropower plants channel the kinetic energy from flowing water into electricity by using a turbine generator.

Hydro plants are typically situated near bodies of water and use diversion structures like dams to change the flow of water. Power generation depends on the volume and change in elevation or head of the flowing water.

Humans have likely used energy from biomass or bioenergy for heat ever since our ancestors learned how to build fires.

Biomass—organic material like wood, dry leaves, and agricultural waste—is typically burned but considered renewable because it can be regrown or replenished. Burning biomass in a boiler produces high-pressure steam, which rotates a turbine generator to produce electricity.

Biomass is also converted into liquid or gaseous fuels for transportation. However, emissions from biomass vary with the material combusted and are often higher than other clean sources.

When Will Renewable Energy Take Over?

Most countries are in the early stages of the energy transition, and only a handful get significant portions of their electricity from clean sources. However, the ongoing decade might see even more growth than recent record-breaking years.

The IEA forecasts that, by 2026, global renewable electricity capacity is set to grow by 60% from 2020 levels to over 4,800 gigawatts—equal to the current power output of fossil fuels and nuclear combined. So, regardless of when renewables will take over, it’s clear that the global energy economy will continue changing.