The Richest People in the World in 2022

Today, the 10 richest people in the world control $1.3 trillion in wealth.

This scale of wealth is equal to approximately 1.3% of the world economy, Amazon’s entire market cap, or spending $1 million a day over 3,000 years. In fact, it’s almost double the amount seen two years ago ($663 billion).

As billionaire wealth accumulates at a remarkable speed, we feature a snapshot of the world’s richest in 2022, based on data from the Forbes Real-Time Billionaires List.

Top 10 Richest People in the World

Elon Musk, with a fortune of $266 billion, is the richest person on the planet.

Despite supply chain bottlenecks, Tesla deliveries have increased 27% since the second quarter of 2021. Musk, who is also CEO and chief engineer of SpaceX, plans to send the largest rocket ever built into orbit in 2022. It spans 119 meters tall.

Here are the richest people in the world, based on data as of September 13, 2022:

With a net worth of $150 billion, Jeff Bezos sits in fourth place. Since last March, Amazon shares have fallen over 20% in light of inflationary price pressures and lagging retail performance.

Most notably, Mark Zuckerberg, CEO of Meta (formerly Facebook) fell off the top 10 for the first time since 2016. Meta shares plunged after reporting the first-ever drop in global daily active users since 2004.

Growth Rates of the Top 10 Overall

Among the 10 richest people in the world, here’s who saw their wealth rise the fastest: Gautam Adani saw his fortune rise more than any other in this top 10 list. Adani heads one of the three largest industrial conglomerates in India. In the coming years, Adani plans to invest $70 billion in the renewable energy sector.

Like Adani, Musk saw his wealth rise among the fastest, even as Tesla shares have declined over 30% since their peak in November.

Even amid the crypto winter, at least ten people worldwide have seen their wealth climb into the billions thanks to the stratospheric rise of cryptocurrencies.

Sam Bankman-Fried, founder of the FTX crypto derivatives exchange, is at the top, with a jaw-dropping $18 billion net worth. Bankman-Fried launched the exchange in 2019 when he was 27.

FTX now has one million users and a $32 billion valuation.

Following Bankman-Fried is Changpeng Zhao, the co-founder of cryptocurrency exchange Binance. It is the largest exchange globally.

Also on the list are co-founders of Gemini cryptocurrency exchange Cameron and Tyler Winklevoss, each with a net worth of over $2 billion. Like their rival, Mark Zuckerberg, they have their sights on building a metaverse.

Will billionaire wealth continue to accumulate at record rates? As the invasion of Ukraine presses on, it will likely have broader structural outcomes.

Some argue that war is a great leveler, a force that has reduced wealth inequality, as seen in the aftermath of WWII. Others suggest that it increases wealth divergence, especially when the war is financed by public debt. Often, costs have become inflated due to war, putting pressure on low and middle-income households.

Whether or not the war will have lasting effects on wealth distribution is an open question, however, if the pandemic serves as any precedent, the effects will be far from predictable.

Who Are the Russian Oligarchs? 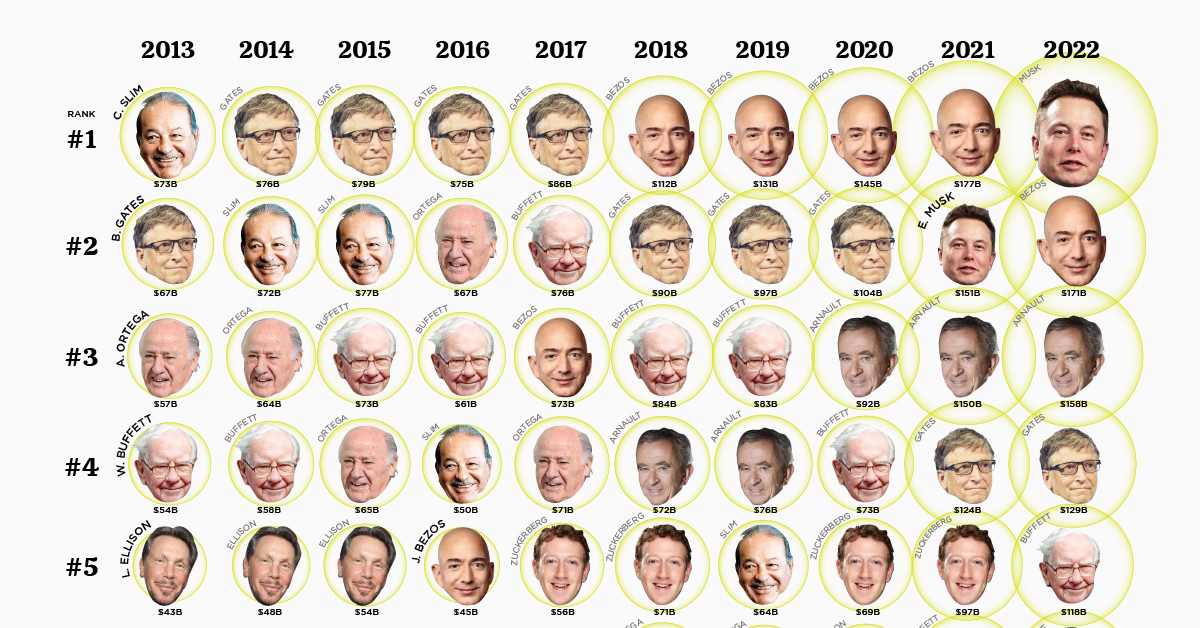