People of color have faced economic inequality for generations, and the recent wave of Black Lives Matter protests has renewed discussions on these disparities.

Compared to White families, other races have lower levels of income and net worth. They are also less likely to hold assets of any type. In fact, 19% of Black families have zero or negative net worth, while only 9% of White households have no wealth.

Today’s chart uses data from the U.S. Federal Reserve’s triennial Survey of Consumer Finances to highlight the racial wealth gap, and the proportion of households that own different kinds of assets by racial group.

The financial profile between racial groups varies widely. Below is the percentage of U.S. families with each type of asset, according to the most recent survey from 2016.

Vehicles are the most common asset across all racial groups, followed by a primary residence.

However, the level of equity—or home value less debts—families have in their houses differs by race. White families have equity of $215,800, whereas Black and Hispanic households have net housing wealth of $94,400 and $129,800 respectively.

In addition, White households are more likely to hold financial assets such as retirement accounts, family businesses, and stocks. These assets are instrumental in building wealth, and are prominent in the wealth composition of America’s richest families.

With fewer people of color holding these assets, they miss out on higher average returns than low-risk assets, as well as the power of compound interest. These portfolio differences are striking, but they are not the most important contributing factor in the racial wealth gap.

White households are also more likely to have demographic characteristics that are associated with wealth. According to the U.S. Federal Reserve, they are:

For example, 39% of White heads of households have a bachelor’s degree or higher, compared to 23% and 17% for Black and Hispanic household heads, respectively. However, education doesn’t fully explain the wealth inequities. After accounting for demographic factors, researchers still found there were considerable inequities. What, then, could be primarily responsible for the racial wealth gap?

While previous research found that the wealth gap is “too big” to be explained by a difference in income, a recent study from the Federal Reserve Bank of Cleveland offers a new perspective. Focusing on White and Black U.S. households only, researchers analyzed the dynamics of wealth accumulation over time, as opposed to previous studies that considered short time periods.

They found that income inequality was the primary contributor to the racial wealth gap. According to the model, if Black and White households had earned the same labor income from 1962 onwards, the Black-to-White wealth ratio would have reached 0.9 by 2007.

Moving forward, the study concludes that policy changes will likely have a positive impact if they address issues contributing to income gaps. This includes reducing racial discrimination in the labor market, and creating programs, such as mentorships, that improve environments for specific racial subgroups.

Do sustainable investments make a difference? From carbon emissions to board diversity, we break down their impact across three industries. Visualizing the Snowball of Government Debt

After an unprecedented borrowing spree in response to COVID-19, what does government debt look like around the world? 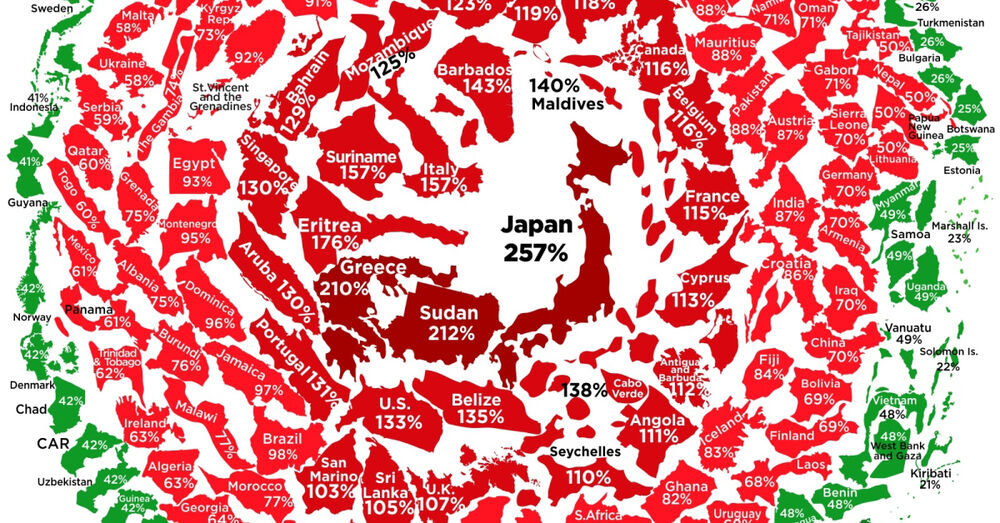 Visualizing the Snowball of Government Debt in 2021

As we approach the second half of 2021, many countries around the world are beginning to relax their COVID-19 restrictions.

And while this signals a return to normalcy for much of the global economy, there’s one subject that’s likely to remain controversial: government debt.

To see how each country is faring in the aftermath of an unprecedented global borrowing spree, this graphic from HowMuch.net visualizes debt-to-GDP ratios using April 2021 data from the International Monetary Fund (IMF).

Ranking the Top 10 in Government Debt

Government debt is often analyzed through the debt-to-GDP metric because it contextualizes an otherwise massive number.

Take for example the U.S. national debt, which currently sits at over $27 trillion. In isolation this figure sounds daunting, but when expressed as a % of U.S. GDP, it works out to a more relatable 133%. This format also allows us to make a better comparison between countries, especially when their economies differ in size.

With that being said, here are the top 10 countries in terms of debt-to-GDP. For further context, we’ve included their 2019 and 2020 values as well.

Such significant debt burdens are the result of non-traditional monetary policies, many of which were first implemented by Japan, then adopted by others. In the late 1990s, for instance, the Bank of Japan (BoJ) set interest rates at 0% to counter deflation and promote economic growth.

This low cost of borrowing enables businesses and governments to accumulate debt much more freely, and has seen widespread use among other developed nations post-2008.

What are the Risks?

Given that a majority of countries in this visual are red (meaning their debt-to-GDP ratios are over 50%), it’s safe to say that government borrowing is common practice.

But are large government debts a cause for concern?

Some believe that excessive borrowing will lead to higher interest costs in the long run, which could detract from economic growth and public sector investment. This theory is unlikely to become a reality anytime soon, however.

A recent report by RBC Wealth Management reported that the cost of servicing U.S. federal debt actually decreased in 2020, thanks to the low borrowing costs mentioned previously.

Perhaps a more prescient question would be: how long can the world’s central banks keep interest rates at near-zero levels?