Thanks to drastic increases in crop yields and the falling need for manual farm labor, a mass migration towards cities started in the years following the Industrial Revolution.

This phenomenon first originated in developed economies as people moved to work in factories that produced consumer goods at a scale never before seen. Then in the 1950s, developing economies started to follow suit.

The results have been staggering, and today a country like China has at least 35 massive cities that each have an economic output comparable to entire countries. After many decades of urbanization, the portion of people living in urban areas has surpassed the total rural population. This happened in 2007, and we are now in the first window in human history in which more people are city dwellers.

So what cities are the meccas for urban migration today? And which are falling out of favor?

The following interactive and zoomable map was put together by Datawrapper, using data from the United Nations.

It lists 500 cities with over 1 million people, and is shaded based on annualized population growth rate between 2000 and 2016. Percent growth corresponds with darker shades of teal, while orange symbolizes negative growth over the timeframe.

It’s strongly recommended to explore the map by zooming in on particular regions. Highlighting cities themselves will give you population details for 2000 and 2016, as well as an annualized percentage growth rate.

Here are some areas we thought were worth looking at in more detail:

North America
North America is mostly what one may expect. The biggest cities (NYC, LA, Chicago, Toronto) aren’t changing too fast, while some cities in the Rust Belt (Detroit, Cleveland, Pittsburgh) have slightly negative growth rates. Austin, TX and Charlotte, NC seem to be the fastest growing cities in the U.S., overall.

South America
Colombia’s Bogotá stands out as the city in South America growing at the most blistering pace. It gained 3.6 million people in the 2000-2016 year period, good for a 2.8% annual growth rate.

China and India
These two populous countries are home to many of the dark-shaded circles on the map. It’s worth looking at an additional screenshot here (just in case if you haven’t zoomed in above). 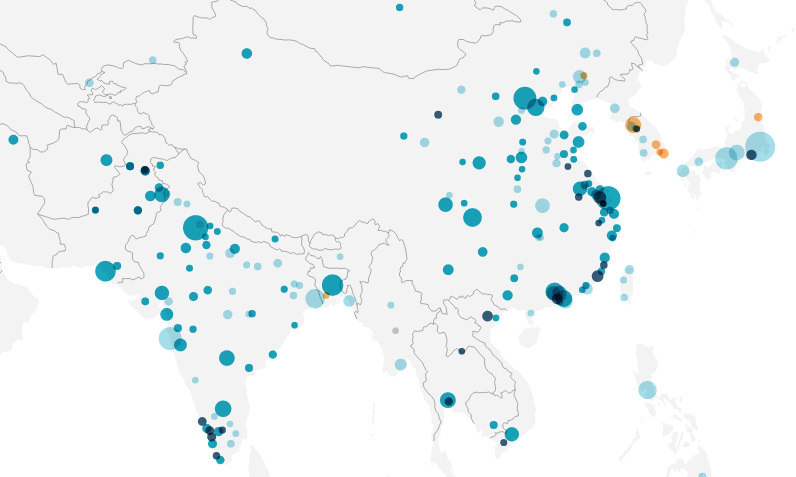 Look at the coast of China – it’s dotted with rapidly expanding cities. Incredibly, in the 16-year span of data, some of these cities have doubled in terms of population. Others like Xiamen have tripled in size. Shanghai alone has gained 10.5 million people in this span of time.

In India, the fastest growing cities are in the south, where there are at least 10 large cities that have roughly doubled in size. Delhi, which is in the north, has added nearly 11 million inhabitants over the same stretch.

Africa
In Africa, we see the names of many of the cities that are projected to be the world’s largest megacities by 2100.

The Largest Company in Every State by Revenue

Prediction Consensus: What the Experts See Coming in 2023

Using our database of 500+ predictions from reports, articles, interviews, and more, we highlight what experts think will happen in 2023 Prediction Consensus: What the Experts See Coming in 2023

In this, our fourth year of Prediction Consensus (now part of our more comprehensive 2023 Global Forecast Series), we’ve learned a few things about the universe of predictions, experts, outlooks, and forecasts.

Of course, we’re susceptible to hype as well, which is why we asked ChatGPT to write the intro to this article:

Not bad. But, simple curiosity aside, it’s the practical considerations we’ll focus on today. This article serves as an overview of how experts think the markets will move, how trends will develop, and which risks and opportunities to watch over the coming 12 months.

Let’s gaze into the crystal ball.

First, we’ll look at some big picture themes, and how experts see them playing out over 2023.

Inflation: This was the top economic story of last year, so it’s a natural starting place. Many of the expert opinions in this year’s database (now at 500+ predictions) are pointing to inflation easing off as the year progresses*. On the downside, few predict that inflation will drop back down to the 2% range that Fed policymakers favor.

GDP: Forecasters have been revising their economic projections downward in recent weeks. The latest was World Bank, which now sees global growth declining to 1.7% in 2023, down from 3% just six months ago. Most of the predictions in our database see global economic growth in the range of 1.5% to 2%.

Recession: As 2022 came to a close, the broad sentiment among experts in the financial industry is that recession is all but inevitable in developed markets this year. As dawn breaks in 2023, a few analysts now feel that the U.S.—and possibly Europe—could narrowly avoid recession.

Markets: Experts on Wall Street and beyond are cautiously optimistic about equities, and after the worst year on record for bonds in 2022, most analysts are declaring that “Bonds are back”.

*Interestingly, this was also last year’s prediction, but the scale of Russia’s invasion of Ukraine was a curve ball that caught many experts off guard.

AI is Eating the World

Jobs being displaced by automation is far from a new theme, but given the exponential improvements in AI in recent years, the risk to entire industries feels more existential today.

As an example, let’s consider art and design. One of the ways many illustrators and artists earn a living is through commissions⁠—essentially being hired and paid to create a specific piece of art in their style.

Today though, free, powerful AI tools, such as Midjourney, allow users to generate high-quality art in an infinite number of styles with just a few clicks. Real art will never truly go out of style, and accomplished artists will always attract an audience, but this one example shows how quickly technology can disrupt an industry. (Artists can take solace in the fact that AI is still comically bad at rendering hands.)

Of course, there are obvious positive aspects to this technological advancement as well. Generative AI tools are useful for generating ideas and mock-ups, and even functional snippets of code. AI systems like AlphaFold unlock a world of possibilities in scientific domains.

From the hundreds of predictions we evaluated, it’s clear that experts view AI as a major catalyst this year. AI start-ups are forcing Big Tech to innovate faster, and employees are finding new ways to use AI-powered tools to increase productivity.

Experts predict that AI will impact peoples’ lives in a much more visible and tangible way in 2023 than in past years.

As world’s second largest economy and linchpin of global trade, events in China have a major impact on the world economy.

Xi Jinping’s reversal of Zero-COVID restrictions should drastically change the trajectory of the country’s economy. For one, reopening will unleash a flood of household spending and consumption.

China’s reopening will also impact other economies as well. For example, the resumption of travel will be a boon to destinations favored by Chinese vacationers. Economically, Hong Kong stands to benefit immensely—its GDP could jump upwards of 8% after reopening is complete. Emerging market commodity exporters could see a lift as well, though inflation could be reinvigorated as a result.

In the U.S., a storm is brewing over the extremely popular video app, TikTok. Many experts predict that regulators will either ban the app altogether in 2023, or force the sale of the company to an American entity. Regardless how that situation plays out, it underscores the souring relationship between the U.S. and China. The rivalry will continue to have ripple effects on the global markets throughout the year.

Energy was the S&P 500’s top performing sector two years in a row, and many experts feel that more growth is on the horizon.

The global system that supplies us with energy is breathtakingly complex, with a lot of unpredictable factors at play. Of all factors, conflict can create the most volatility, and 2023 has a number of geopolitical risks that could impact energy supplies. First, Europe will continue to diversify its energy imports away from Russia. Recently, liquefied natural gas from the U.S. has helped fill gaps.

Next, Iran could be a flashpoint in the Middle East this year. A brewing conflict in the region could cause instability, which will have knock-on effects on the energy industry—particularly in the event of attacks on oil and gas infrastructure.

Here are a few other factors to consider this coming year:

After a lull in December (nobody wants to be the company that fires people during the holiday season) tech and tech-adjacent companies have resumed their zealous slashing of headcounts.

There had been a slew of layoffs already in 2023, topped by Salesforce, which is trimming 7,000 jobs, and Amazon, which is cutting 18,000 roles—primarily impacting the corporate side of the business.

Given the influence of Elon Musk in the tech industry, many experts are suggesting that his strategy of ruthlessly slashing headcount at Twitter might serve as inspiration for other technology leaders.

Employees in the tech industry are very well compensated, and many were hired during periods of intense competition between companies to attract talent and capture market share.

During a downturn, it’s tempting—and often necessary—for companies to course-correct. There were also predictions that the whole start-up and investment ecosystem could be switching from a hypergrowth to a value-focused mindset, which is a theme that is worth consideration in 2023.

The Prediction Consensus was created using our database of 500+ expert predictions for 2023.
Today, we also launched the 2023 Global Forecast Series report, which dives into these themes and predictions in much deeper detail.
Make sure you get this cheat sheet for 2023 by becoming a VC+ member right now.
Tweet
Share
Share
Reddit
Email
Continue Reading