Comparing Objects in our Solar System by Rotation, Size, and More

Comparison of Selected Objects in our Solar System

Our solar system is home to various celestial objects, including planets, moons, asteroids, and even dwarf planets.

All of these objects differ in many ways, yet work in perfect unison. A comparative study of the various features of these celestial bodies gives us some fascinating results.

The above animation from planetary scientist Dr. James O’Donoghue helps put in perspective the different objects in the solar system in terms of size, rotational speed, and the axial tilt at which they rotate.

With such a diverse solar system of planets and other celestial objects, there is no shortage of questions to think about. Like what is the exact diameter of Jupiter, or how fast does Pluto rotate?

To answer them, here is a comparison of some select celestial bodies in our solar system, going from the biggest to smallest objects:

Planets like Venus or Pluto rotate in the opposite direction to Earth, or in retrograde, and thus are denoted with a negative symbol before their values.

Another interesting observation is that the Sun rotates on its axis only once in about 27 days and has an axial tilt of about 7.25 degrees from the axis of Earth’s orbit. Hence, we see more of the Sun’s north pole in September of each year and the south pole in March.

How do the Various Objects Compare Against Earth?

The Earth we live on is a unique planet within our solar system containing water and air, and is where living things thrive. But, aside from those surface level differences, is our home really different from other planets and celestial objects?

In the table below, we compare other nearby celestial bodies with Earth, using ratios—this time, from smallest to largest:

Though Jupiter is around 11 times wider than Earth, its rotational period is only 0.4 times as long as our planet’s—meaning it rotates at a much faster speed.

On the other hand, Venus uses a slow and steady approach, taking 244 times longer to make one rotation (in comparison to background stars) when contrasted to Earth.

How much does a space flight cost? Here’s a look at the cost per kilogram for space launches across the globe since 1960. 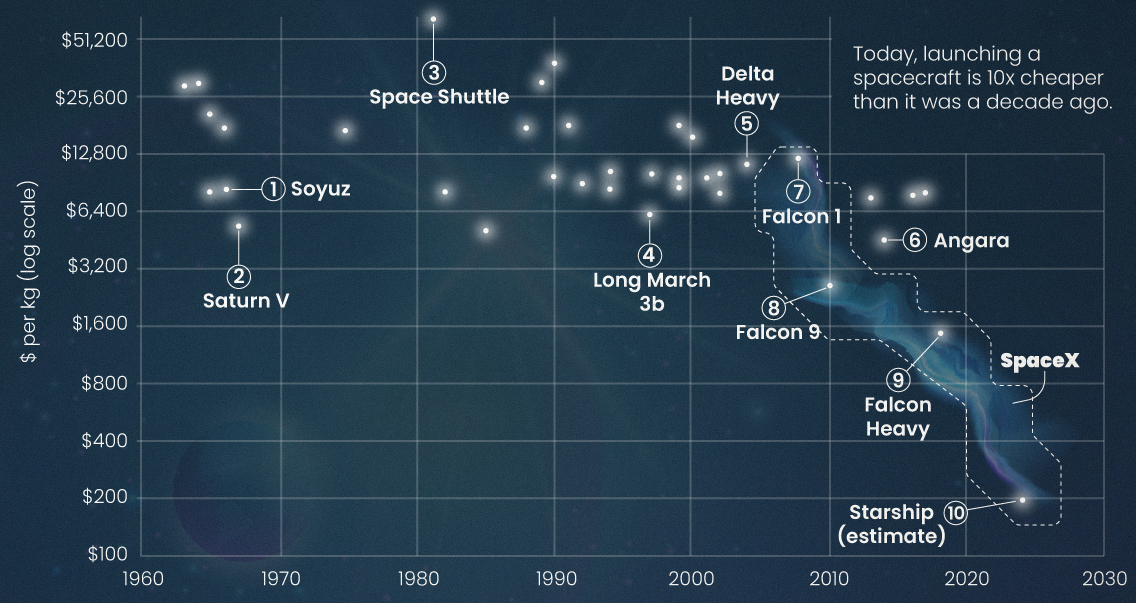 On December 21, 2021, SpaceX’s Falcon 9 rocket launched a cargo capsule to deliver supplies and Christmas gifts to astronauts in the International Space Station.

Just eight minutes after liftoff, the rocket’s first stage returned to Earth, landing on one of SpaceX’s drone ships in the Atlantic Ocean. This marked the company’s 100th successful landing.

Like other companies such as Jeff Bezos’ Blue Origin, and Ball Aerospace, SpaceX is designing and building innovative spacecraft that are speeding up space delivery by making it more routine and affordable. But how much does it cost to launch a cargo rocket into space, and how has this cost changed over the years?

In the graphic above we take a look at the cost per kilogram for space launches across the globe since 1960, based on data from the Center for Strategic and International Studies.

The 20th-century was marked by competition between two Cold War adversaries, the Soviet Union (USSR) and the United States, to achieve superior spaceflight capability.

The space race led to great technological advances, but these innovations came at a high cost. For instance, during the 1960s NASA spent $28 billion to land astronauts on the moon, a cost today equating to about $288 billion in inflation-adjusted dollars.

In the last two decades, space startup companies have demonstrated they can compete against heavyweight aerospace contractors as Boeing and Lockheed Martin. Today, a SpaceX rocket launching can be 97% cheaper than a Russian Soyuz ride cost in the ’60s. 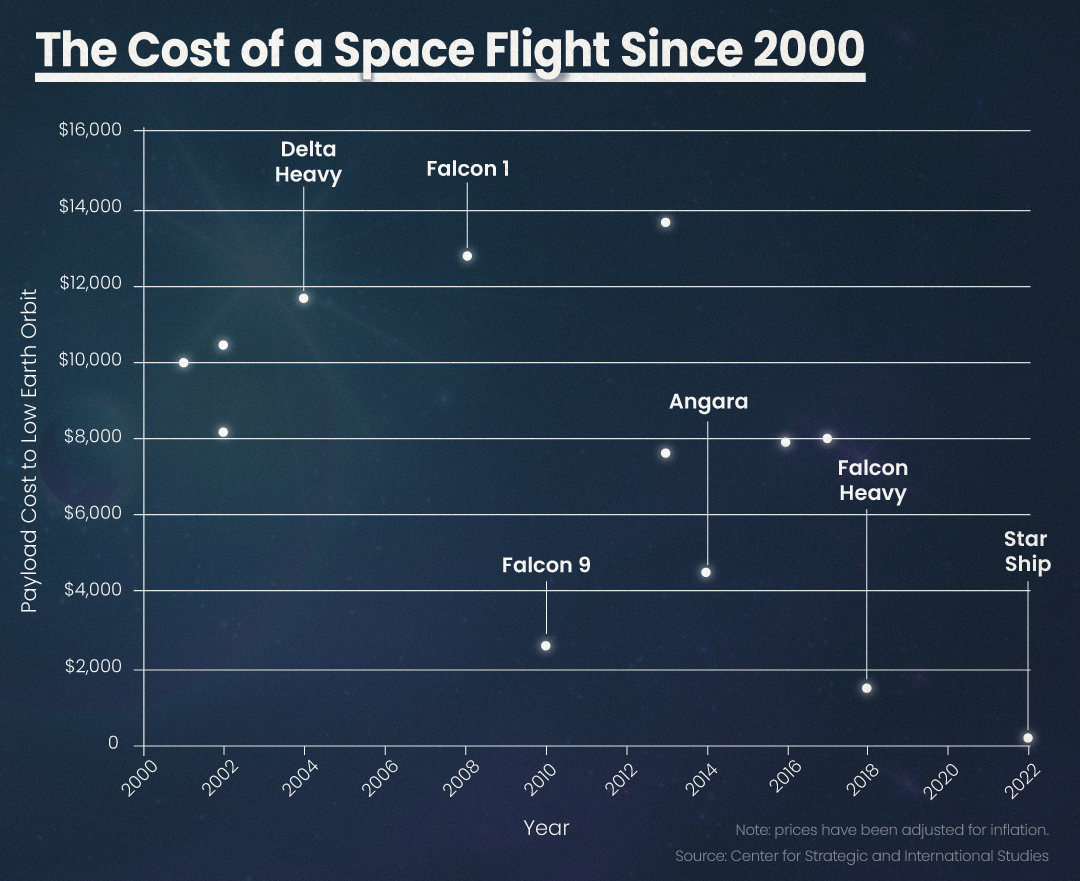 The key to increasing cost efficiency?

Although competition has brought prices down for cargo flights, human space transportation is still pricey.

During the last 60 years, roughly 600 people have flown into space, and the vast majority of them have been government astronauts.

For a suborbital trip on Virgin Galactic’s SpaceShipTwo and Blue Origin’s New Shepard, seats typically cost $250,000 to $500,000. Flights beyond that to actual orbit—a much higher altitude—are far more expensive, fetching more than $50 million per seat.

The Future of Space Flight

In a SpaceX press briefing, SpaceX Director Benji Reed said, “We want to make life multi-planetary, and that means putting millions of people in space.”

This may still seem like a stretch for most people. But, given the decreasing cost of space flights over the last two decades, perhaps the sky won’t be the limit in the near future.

A Visual Introduction to the Dwarf Planets in our Solar System Pluto and the Introduction of Dwarf Planets

Since its discovery in 1930, Pluto has been a bit of a puzzle.

For starters, not only is Pluto smaller than any other planet in the solar system, but it’s also smaller than Earth’s moon. It also has an extremely low gravitational pull at only 0.07 times the mass of the objects in its orbit, which is just a fraction of the Moon’s own strength.

At the same time, Pluto’s surface resembles that of terrestrial planets such as Mars, Venus or the Earth, yet its nearest neighbors are the gaseous Jovian planets such as Uranus or Neptune. In fact, Pluto’s orbit is so erratic that it led many scientists to initially believe that it originated elsewhere in space and the Sun’s gravity pulled it in.

These qualities have challenged the scientific view of Pluto’s status as a planet for years. It wasn’t until the discovery of Eris in 2005, one of many increasingly identified trans-Neptunian objects (objects beyond the planet Neptune), that the International Astronomical Union (IAU) defined criteria for classifying planets.

With Eris and other trans-Neptunian objects sharing similar characteristics with Pluto, the definition for dwarf planets was created, and Pluto got downgraded in 2006.

So what are dwarf planets, how do they differ from “true” planets and what are their characteristics?

The History of Dwarf Planets

A dwarf planet is a celestial body that almost meets the definition of a “true” planet. According to the IAU, which sets definitions for planetary science, a planet must:

Dwarf planets, along with not being moons or satellites, fail to clear the neighborhoods around their orbits. This is the primary reason why Pluto lost its status: because it shares part of its orbit with the Kuiper belt, a dense region of icy space bodies.

Based on this definition, the IAU has recognized five dwarf planets: Pluto, Eris, Makemake, Haumea, and Ceres. There are four more planetary objects*, namely Orcus, Sedna, Gonggong and Quaoar, that the majority of the scientific community recognize as dwarf planets.

Six more could be recognized in the coming years, and as many as 200 or more are hypothesized to exist in the Outer Solar System in the aforementioned Kuiper belt.

Ceres is the earliest known and smallest of the current category of dwarf planets. Previously classified as an asteroid in 1801, it was confirmed to be a dwarf planet in 2006. Ceres lies between Mars and Jupiter in the asteroid belt, and it is the only dwarf planet that orbits closest to Earth.

Here is a brief introduction to the most recognized dwarf planets:

Here are a few interesting facts about the dwarf planets discovered in our solar system:

Ceres loses 6kg of its mass in steam every second

The Herschel Space Telescope observed plumes of water vapor shooting up from Ceres’ surface; this was the first definitive observation of water vapor in the asteroid belt. This happens when portions of Ceres’ icy surface warm up and turn into steam.

A day on Haumea lasts 3.9 hours

Haumea has a unique appearance due to its rotation, which is so rapid that it compresses the planet into an egg-like shape. Its rotational speed and collisional origin also make Haumea one of the densest dwarf planets discovered to date.

Makemake was named three years after its discovery in 2005

Makemake’s discovery close to Easter influenced both its name and nickname. Before being named after the creator of humanity and god of fertility in the mythos of the Rapa Nui (the native people of Easter Island), Makemake was nicknamed “Easter bunny” by its discoverer Mike Brown.

Eris was once considered for the position of the 10th planet

Eris is the most massive dwarf planet in the solar system, exceeding Pluto’s mass by 28%. As such, it was a serious contender to become the tenth planet but failed to meet the criteria set out by the IAU.

The planet’s composition makes up two-thirds rock and one-third ice, mostly a mixture of methane and carbon dioxide. One day on Pluto is 153.6 hours, approximately 6.4 Earth days, making it one of the slowest rotating dwarf planets.

Exploratory Missions and New Planets on the Horizon

With newer technology rapidly available to the scientific community and new exploratory missions getting more data and information about trans-Neptunian objects, our understanding of dwarf planets will increase.

So what’s holding back Hygiea’s confirmation as a dwarf planet? The criterion for being massive enough to form a spherical shape is in contention; it remains unclear if its roundness results from collision/impact disruption or its mass/gravity.

Along with Hygiea, other exciting dwarf planets could be soon discovered. Here is a quick rundown of some serious contenders:

Discovered in 2004, it is a trans-Neptunian object in the Kuiper belt, approximately 850 kilometers in diameter. As of 2018, it is located about 44.8 astronomical units from the Sun. Salacia’s status is in contention because its planetary density is arguable. It is uncertain if it can exist in hydrostatic equilibrium.

With an estimated diameter of 934±47 kilometers, 2002 MS4 is comparable in size to Ceres. Researchers need more data to determine whether 2002 MS4 is a dwarf planet or not.

Discovered at the Palomar Observatory in 2002, it has a rotation period of 8.8 hours, a moderately red color (similar to Quaoar) and no apparent planetary geology. Its low albedo has made it difficult to determine whether or not it is a dwarf planet.

Varda takes its name after the queen of the Valar, creator of the stars, one of the most powerful servants of almighty Eru Iluvatar in J. R. R. Tolkien’s fictional mythology. Varda’s status as a dwarf planet is uncertain because its size and albedo suggest it might not be a fully solid body.

This space object has a surface diameter of about 740 kilometers. It orbits the Sun once every 449 years. Researchers need more data on the planet’s mass and density to determine if it is a dwarf planet or not.

It is approximately 940 kilometers across its longest axis, as it has an elongated shape. This shape is presumably due to its rapid rotation rate of 6.71 hours, similar to that of other dwarf planets like Haumea. Like Varda, it remains unknown if this object has compressed into a fully solid body and thus remains contentious amongst astronomers regarding its planetary status.

*Note: The IAU officially recognizes five dwarf planets. We include four additional dwarf planets widely acknowledged by members of the scientific community, especially amongst leading planetary researchers like Gonzalo Tancredi, Michael Brown, and William Grundy. There are many more potential dwarf planets not listed here that remain under investigation.