The Median Age of the Population in Every Country

With a few notable exceptions, the world is rapidly aging.

Today’s infographic, which was shared by Bill Gates on Reddit, shows this incredible explosion in age and how different countries contrast with one another on this demographic metric.

While aging populations in Europe, North America, and Asia stand out on this type of visualization, it’s also important to look at the negative space. In both South America and Africa, populations are still quite young, with Africa getting younger and younger.

Note: The infographic is grouped based on U.N. regional classifications, and lumps Central America, the Caribbean, and South America as one demographic region.

Which countries are the outliers in terms of global demographics?

Let’s start by taking a look at the oldest countries in terms of median age.

Japan takes the cake for the oldest population and it’s joined by a host of European nations.

The following countries tied for the #7 spot, which is just off of the above list: Austria, Croatia, Latvia, Lithuania, Slovenia, Spain, and Bermuda. All of these places had median ages of 43 years, with Bermuda being the only non-European state of this group.

It’s worth noting that some smaller countries appear to be excluded from Gates’ infographic. As we showed on our last chart covering the subject of median age, which uses a different data set, the small city-state of Monaco (which has a population of just 39,000 people) actually has the highest median age in the world at 53.1 years.

Now, let’s take a peek at the world’s youngest countries in terms of median age.

The youngest countries globally are Chad and Niger with a median population age of 14 years. Both are located in Sub-Saharan Africa.

The only non-African country is war-torn Afghanistan, where the median age is 16 years.

A variety of countries tied with a median age of 17 years old, which puts them just off of the above list. Those countries include: Benin, Burundi, Ethiopia, Madagascar, Malawi, Nigeria, Tanzania, Zambia, Yemen, and Timor-Leste.

Want to get an even better idea of what the world looks like as it ages?

To get a sense of change over the coming decades, it’s worth taking a look at this animation that shows median age projections with a focus on Western countries all the way until the year 2060.

These Powerful Maps Show the Extremes of U.S. Population Density

The U.S. population is spread across a huge amount of land, but its distribution is far from equal. These maps are a unique look at population density America’s 328 million people are spread across a huge amount of territory, but the population density of various regions is far from equal.

It’s no secret that cities like New York have a vastly different population density than, say, a rural county in North Dakota. Even so, this interactive map by Ben Blatt of Slate helps visualize the stark contrast between urban and rural densities in a way that might intrigue you.

How many counties does it take to equal the population of these large urban areas? Let’s find out.

New York City became the largest city in the U.S. back in 1781 and has long been the country’s most densely packed urban center. Today, 1 in every 38 people living in the United States resides in The Big Apple. For the northwestern counties above to match the population of New York City, it takes a land area around the size of Mongolia. The region shown above is 645,934 mi², and runs through portions of 12 different states.

In order to match the population of the entire New York metropolitan area, which holds 18 million people and includes adjacent cities and towns in New York state, New Jersey, and Connecticut, the above equivalent area would have to be even more massive.

Los Angeles County is home to the 88 incorporated cities that make up the urban area of Los Angeles.

Even excluding nearby population centers such as Anaheim, San Bernadino, and Riverside (which are located in adjacent counties) it is still the most populous county in the United States, with over 10 million inhabitants. To match this enormous scale in Middle America, it would take 298 counties covering an area of 471,941 mi².

Next up is America’s third largest city, Chicago. For this visualization, we’re using the Chicago metropolitan area, which covers the full extent of the city’s population.

To match the scale of the population of the Windy City, we would need to add up every county in New Mexico, along with large portions of Colorado, Arizona, and Texas.

Conversely, what if we transported the people in the country’s least densely populated counties into the middle of an urban center?

As it turns out, the total population of the five least populated counties is just 1,394—roughly the same amount of people that live on the average Manhattan block.

Visualized: Comparing the Titanic to a Modern Cruise Ship

The sheer size of the Titanic was a sight to behold in 1912, but over 100 years later, how does this vessel compare to a modern cruise ship? 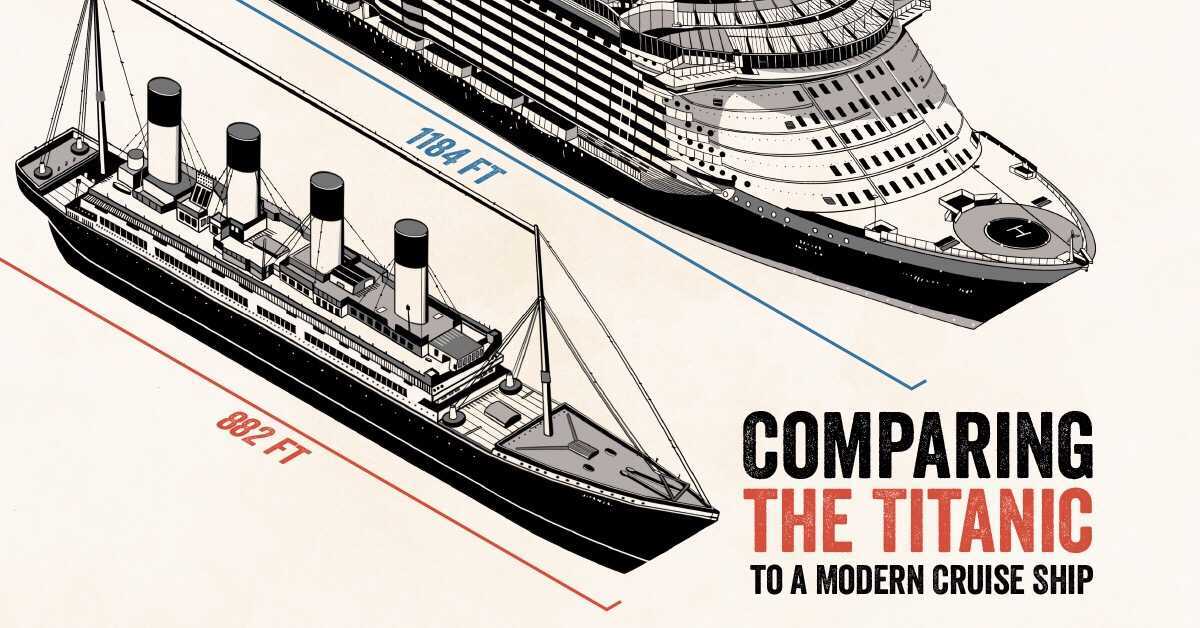 Remembering the Tragedy of the Titanic

When the Titanic was completed on April 2, 1912, it was the largest and perhaps most luxurious ship in the world. The vessel could hold over 3,300 people including crew members, and boasted various amenities including a swimming pool and squash court.

The Titanic’s impressive size attracted many of the world’s wealthiest individuals, and on April 10, 1912, it set out on its maiden voyage. Just five days later, the ship sank after hitting an iceberg, resulting in more than 1,500 deaths.

It’s been over 100 years since the Titanic’s demise, so how have passenger ships evolved?

To find out, we’ve visualized it beside Royal Caribbean’s Symphony of the Seas, currently the world’s largest cruise ship.

The Size of the Titanic, in Perspective

The following table lists the dimensions of both ships to provide a better understanding of the Titanic’s relative size.

One of the biggest differences between these two ships is width, with the latter being more than twice as wide. This is likely due to the vast amenities housed within the Symphony of the Seas, which includes 24 pools, 22 restaurants, 2 rock climbing walls, an ice-skating rink, and more. With accommodations for 6,680 passengers, the Symphony of the Seas also supports a crew that is 147% larger.

Lessons Learned from the Disaster

Inadequate safety preparations were a contributor to the Titanic’s high death toll. During its journey, the vessel carried enough lifeboats to accommodate just 33% of its total passengers and crew. This was legal at the time, as regulations based a ship’s number of required lifeboats on its weight, rather than its passenger capacity.

To make matters worse, investigations determined that the Titanic’s lifeboats had not been used to their full capacity, and that a scheduled lifeboat drill had been cancelled by the ship’s captain. These shortfalls, among others, paved the way for numerous improvements in maritime safety regulation.

These include the creation of the International Convention for the Safety of Life at Sea Treaty (SOLAS) in 1914, which is still in force today. Regarded as the most important international treaty on ship safety, SOLAS has been updated numerous times and is followed by 164 states, which together flag 99% of merchant ships (by gross tonnage) on the high seas today.