Mapped: The 1.2 Billion People Without Access to Electricity - Visual Capitalist

For anyone reading this article, the benefits of electricity need not be explained.

Access to electricity is now an afterthought in most parts of the world, so it may come as a surprise to learn that 16% of the world’s population — an estimated 1.2 billion people — are still living without this basic necessity. Lack of access to electricity, or “energy poverty”, is the ultimate economic hindrance as it prevents people from participating in the modern economy.

Where are people still living in the dark, and how are these energy challenges being addressed? Let’s dive in.

Where the Grid Reaches, and Beyond

At this point in time, a majority of countries have 100% electricity access rates, and many more have rates above 95%. This includes most of the world’s high-population countries, such as China, Brazil, and the United States.

India is fast approaching that benchmark for access. The massive country has made great strides in a short amount of time, jumping from a 70% to 93% access rate in a single decade.

Meanwhile, North Korea is an obvious outlier in East Asia. The Hermit Kingdom’s lack of electrification isn’t just conspicuous in the data — it’s even visible from space. The border between the two Koreas is clearly visible where the dark expanse of North Korea runs up against the glow of South Korea’s urban areas.

It’s been estimated that more than half of North Korea’s people are living in energy poverty.

In 1995, a mere 20% of sub-Saharan Africa’s population had access to power. While today’s figure is above 40%, that still means roughly 600 million people in the region are living without access to electricity.

Not surprisingly, energy poverty disproportionately impacts rural Africans. Nearly all of the countries with the lowest levels of electricity access have rural-majority populations:

Nonexistent and unreliable electricity isn’t just an issue confined to rural Africa. Even Nigeria — Africa’s largest economy — has an electrification rate of just 54%.

Where there is an electrical grid, instability is also causing problems. A recent survey found that a majority of Nigerian tech firms face 30 or more power outages per month, and more than half ranked electricity as a “major” or “severe” constraint to doing business.

This is pattern that is repeated in a number of countries in Africa: 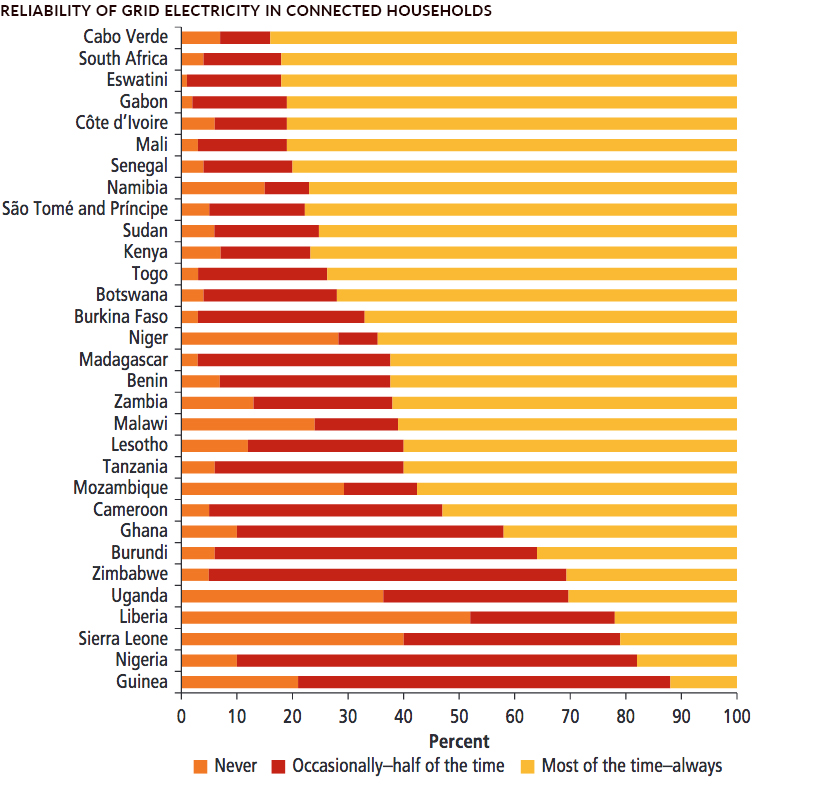 It has taken an average of 25 years for countries to move from 20% to 80% access, so history suggests that it may be a number of years before sub-Saharan Africa fully catches up with other parts of the world. That said, Vietnam was able to close that gap in only nine years.

Traditional utility companies continue to make inroads in the region, but it might be a smaller-scale solution that brings electricity to people in harder-to-reach rural villages.

Between 2009 and 2015, solar PV module prices fell by 80%, ushering in a new era of affordability. Solar powered mini-grids don’t just have the potential to bring electricity to new markets, it can also replace the diesel-powered generators commonly used in Africa.

For the 600 million people in sub-Saharan Africa who are still unable to fully participate in the modern world, these innovations can’t come soon enough.

Soaking up the Sun: Visualizing the Changing Patterns of Daylight in One Year