According to plate tectonic theory, the Earth’s surface is made up of slabs of rock that are slowly shifting right under our feet.

Because of this constant movement, today’s Earth looks a lot different from what it did millions of years ago. Today’s animation looks at the Earth’s tectonic plate movement from 1 ga (geological time for 1 billion years ago) to the present-day, via EarthByte on YouTube.

The Emergence of Plate Tectonic Theory

Plate tectonics is a relatively new theory—in fact, according to National Geographic, it hadn’t become popular until the 1960s. However, the concept of continental movement was brewing long before it became widely accepted.

In 1912, German scientist Alfred Wegener proposed a theory he called continental drift. According to Wegener’s theory, Earth’s continents once formed a single, giant landmass, which he called Pangaea.

Over millions of years, Pangaea slowly broke apart, eventually forming the continents as they are today. Wegener believed this continental drift explained why the borders of South America and Africa looked like matching puzzle pieces. He also pointed to similar rock formations and fossils on these two continents as proof to back his theory.

Initially, the scientific community wasn’t on board with the theory of continental drift. But as more data emerged over the years, including research on seafloor spreading, the theory started to gain traction.

Nowadays, it’s believed that Pangea was just one of several supercontinents to mass together (and break apart) over the course of geological history.

The exact number of supercontinents is largely debated, but according to the Encylopedia of Geology, here are five (including Pangea) that are widely recognized:

According to the theory, this cycle of breaking apart and coming together happens because of subduction, which occurs when tectonic plates converge with one another.

The supercontinent cycle also ties into ocean formation. The below example of the Wilson Cycle specifically keys in on how the Atlantic Ocean, and its predecessor, the Iapetus Ocean, were formed as supercontinents drifted apart: The Importance of Plate Tectonics

Plate tectonics has been a game-changer for geologists. The theory has helped to explain tons of unanswered geological questions, assisting scientists in understanding how volcanoes, mountains, and ocean ridges are formed.

It’s also valuable for the oil and gas industry since it explains how sedimentary basins were created, allowing geologists and engineers to target and locate vast oil reserves.

Since the theory of plate tectonics is relatively new, there’s still a lot to be discovered in this field of research. However, in March 2021, a report was published in Earth-Science Reviews that, for the first time, visualized a continuous plate model that shows how Earth’s plates have shifted over the last billion years.

Coffee vs Tea vs Soft Drinks: What Caffeine Drinks Do Countries Prefer? 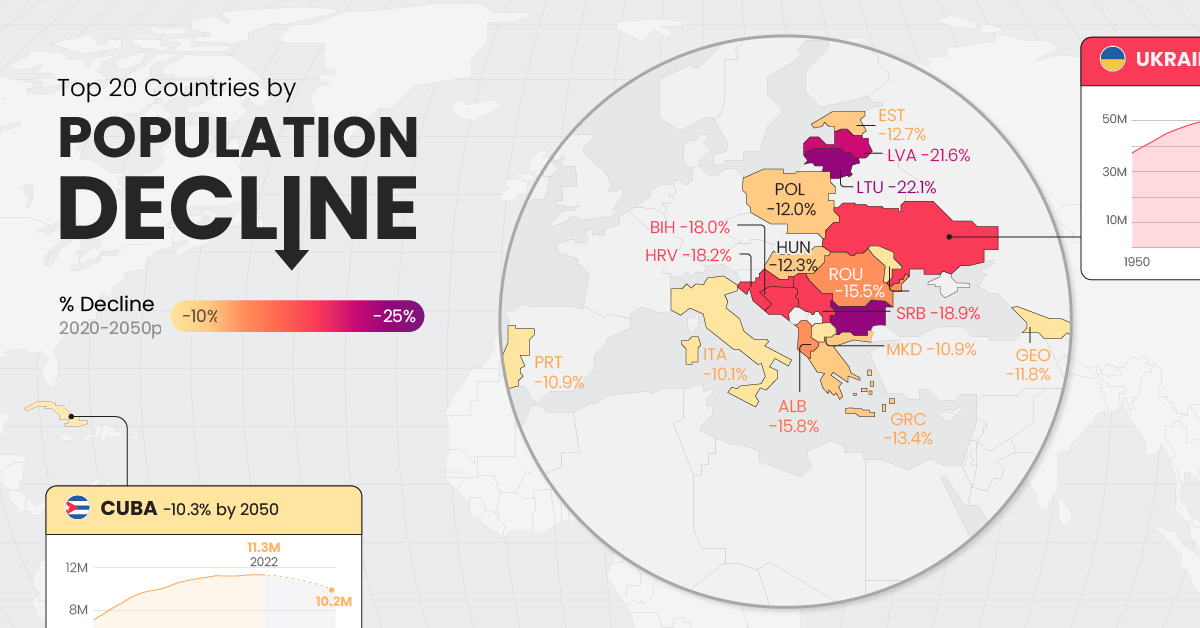 Wind is a great renewable energy source, but the spread of potential power is uneven. This graphic maps the average wind speed of the continental U.S. Wind energy is a hot topic in North America and around the world as a decarbonization tool, but full utilization requires a lot of wind.

This graphic from the team at the Woodwell Climate Research Center maps the average wind speed of the continental U.S. based on NOAA data from 2021.

Zooming in, you can examine North America’s wind regions and patterns in great detail. Clearly visible is the concentration of high wind speeds in the Great Plains (known as the Prairies in Canada), which has the greatest potential for wind power. You can also follow westerly winds traveling through the North American Cordillera of mountains, including the Rocky Mountains and Cascades.

Meanwhile, the Eastern U.S. and Canada have significantly lower average wind speeds, especially in the American South. That’s despite hurricanes with extremely high winds occasionally moving northward along the Eastern Seaboard towards the North Atlantic.