Infographic: A Timeline of Every Major Disruption in Payments

The current payments landscape is moving at a blistering pace.

Mobile payments, for example, is a market growing at a 39.2% annual clip, and it will be worth nearly $3 trillion by 2020. At the same time, it’s almost impossible to keep up with the growth in the blockchain world. Every day, new technical problems are being solved, coin market caps are hitting new highs, and Bitcoin is dominating the news cycle.

But, payments hasn’t always been this fast-moving or exciting. In fact, right now is an anomalous moment in the sector – and we’re actually witnessing a rare intersection of multiple disruptive technologies coming to age at the same time.

A Timeline of Payment Disruptions

Today’s infographic comes from Glance Technologies, and it shows a historical timeline of the major disruptions that have occurred in payments, ranging from the Chinese invention of paper money to the birth of Paypal.

It keys in on the new wealth created by these incredible technological advancements – and it also highlights the origins behind many of the crucial pieces of today’s payments landscape.

What fundamental change in payments is the next big one that will be visible across all levels of society?

The Next Big Shift

It may be too early to tell for sure what the next society-wide shift in payments will be, but there are definitely some obvious candidates.

Blockchain
Even with the precipitous rise of Bitcoin and its incredible journey to $10,000 and beyond, it’s still easy to underestimate the real possibilities in a decentralized, blockchain-based payments world. Various types of payments will be automated with smart contracts, and many of the world’s largest banks are already deep in experimentation with digital currencies.

In an ultra rosy scenario, it’s even imaginable to say that fiat currency may one day be obsolete. There are still many challenges to overcome, of course, but the blockchain could soon be ubiquitous in everyday payments at a societal level.

100% Cash-Free
Just like the blockchain, the idea of going cashless already has growing adoption – however, it is not yet something that dominates all facets of payments on a societal level. Right now, in the United States, just 38% of people said they would be willing to go completely cash-free.

With the market for mobile payments increasing at a 39.2% CAGR, a fully cash-free world might not be that far off, though.

Other
While the two above trends are the most obvious, there are some dark horses out there. For example, biometrics is one that could change how payments are verified, adding a new layer of security to transactions. Instead of using a smartphone, plastic, or cash, could you be paying for every purchase with a simple fingerprint soon?

Regardless of which of these is the next ubiquitous technology, the next five years of the payments space will certainly be exciting to watch.

The Latte Index: Using the Impartial Bean to Value Currencies

Which Countries Feature Women on Banknotes?

Today, only 15% of banknotes feature women. This infographic looks at who these women are and which countries feature them on their currency Visualizing the Women on Banknotes Worldwide

A study by Swedish loan company Advisa analyzed 1,006 current international banknotes and found that only 15% featured images of women.

Who are these women, and which countries feature them on their bills?

This graphic by Ivett Kovács and Gabrielle Merite visualizes women on banknotes around the world, showing their main occupations, and the value of the banknotes they’re featured on.

To create this graphic, Ivett used data from the Standard Catalogue of World Paper Money, compiled by Vox.

According to the dataset, Queen Elizabeth II is the most featured woman worldwide.

Canada was the first country to use an image of Queen Elizabeth II on their money. In 1935, Canada printed her on a $20 banknote—the British monarch was only a 9-year-old princess at the time. Now, Queen E appears on a variety of different banknotes in 19 different countries. In the Cayman Islands, she’s on their $1, $5, $25, $50, and $100.

A few other queens or royal members have made it onto different banknotes too—Georgia’s 50 lari note has an image of Queen Tamar, who was the Queen of Georgia from 1184 to 1213, and Albania’s 100 lekë features Queen Teuta, a 3rd century queen of an Illyrian tribe.

While royals (especially Queen Elizabeth II) are frequently featured on bills worldwide, women in other positions have also made it onto banknotes.

Authors, singers, poets, and painters are featured on a number of different currencies. For instance, Sweden has Astrid Lindgren—the author of Pippi Longstocking—on their 20 kronor.

Sweden also features three other women on their bills: Birgit Nilsson, Jenny Lind, and Greta Garbo, making their banknote features an even 50/50 split between men and women.

A Quick History of Women Featured on U.S. Banknotes

Essentially the only time a woman was prominently featured on a U.S. banknote was in the late 19th century when Martha Washington—the wife of President George Washington—appeared on a $1 silver certificate. This dearth of women on U.S. banknotes may soon come to an end. The Biden administration is now speeding up efforts to put Harriet Tubman on the $20 bill, an initiative that was delayed in recent years. When the plan was initially introduced by then Treasury secretary, Jacob Lew, in 2016, the new design was set to be unveiled in 2020 on the centennial of the 19th Amendment (which granted women the right to vote).

It’s worth noting that women are still consistently underrepresented in positions of power, and in the media.

And even when women do hold authoritative positions, research has shown they’re taken less seriously than their male counterparts.

Want to be part of the change? Learn more about Women’s Day, or donate to fundraising efforts for female-focused charities.

Spanning from 2004-2022, this animation of the Big Mac Index shows the rise in burger prices, and which currencies may be under or overvalued. 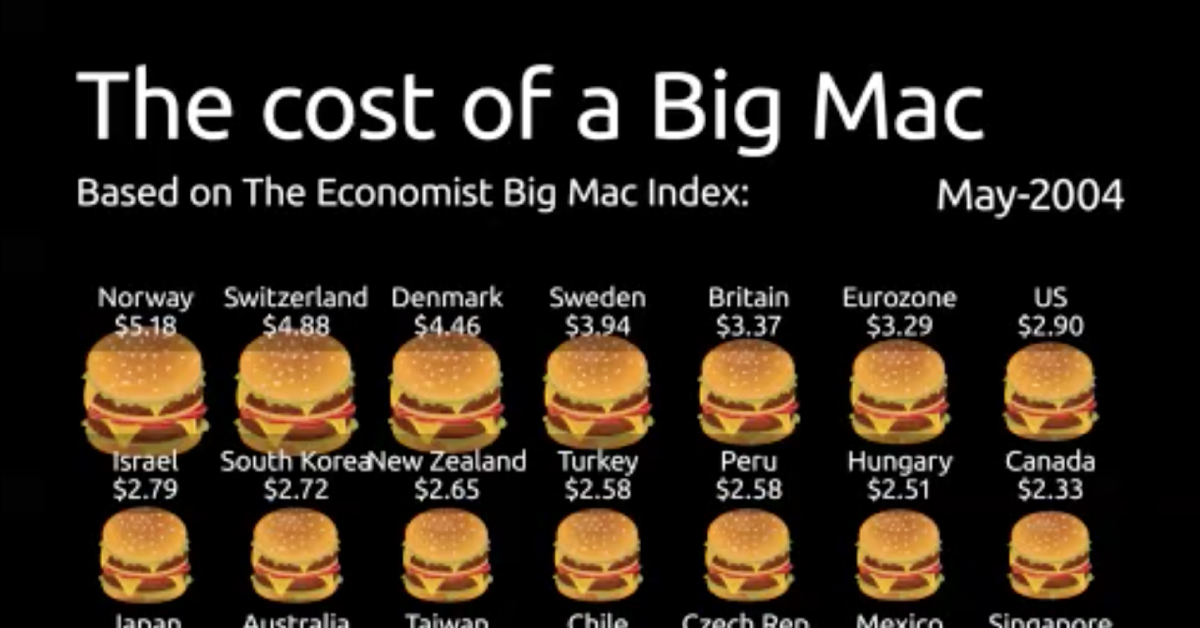 The Big Mac Index: A Measure of PPP and Burger Inflation

The Big Mac was created in 1967 by Jim Delligati, a McDonald’s franchise owner in Pennsylvania. It was launched throughout the U.S. the following year, and today you can buy one in more than 70 countries. However, the price you pay will vary based on where you are, as evidenced by the Big Mac Index.

Spanning from 2004-2022, this animation from James Eagle shows the U.S. dollar price of a Big Mac in select countries around the world.

What Does the Big Mac Index Show?

The Big Mac Index was invented by The Economist in 1986. It is intended to be a lighthearted way to demonstrate the concept of purchasing power parity. In other words, it helps illustrate the idea that market exchange rates between countries may be “out of whack” when compared to the cost of buying the same basket of goods and services in those places.

Given that McDonald’s is one of the biggest companies in the world and the Big Mac is widely available globally, it means that the famous burger can be used as a basic goods comparison between most countries. It also has the advantage of having the same inputs and distribution system, with a few minor modifications (like chicken patties in India instead of beef). According to the Big Mac Index, the Yuan is undervalued by 34%.

Beyond currency misalignment, the index has other uses. For instance, it shows inflation in burger prices over time. If we compare the price of a Big Mac across countries in the same currency—such as the U.S. dollar—we are also able to see where burgers are cheaper or relatively more expensive.

Burger Costs Around the World

In the animation, all Big Mac prices have been converted from local currency to U.S. dollars based on the actual exchange rate in effect at the time. Below, we show the change in price of a Big Mac in select countries, ordered by January 2022 prices.

Switzerland takes the cake for the priciest Big Mac, followed closely behind by Norway. Both countries have relatively high price levels but also enjoy higher wages when compared to other OECD countries.

Venezuela has seen the largest jump in burger prices, with the cost of a Big Mac climbing nearly 250% since 2004. The country has been plagued by hyperinflation for years, so it’s no surprise to see large price swings in the country’s data.

While it appears that the price of a Big Mac has decreased in Turkey, this is because the prices are shown in U.S. dollars. The new Turkish lira has depreciated against the U.S. dollar more than 90% since it was introduced in 2005.

Finally, it’s worth noting that Russia has the cheapest Big Mac, reflecting the country’s lower price levels. Labor costs in Russia are roughly a third of those in Switzerland.

The Big Mac Index is useful for a number of reasons. Investors can use it to measure inflation over time, and compare this to official records. This can help them value bonds and other securities that are sensitive to inflation. The Big Mac Index also indicates whether a currency may be over or undervalued, and investors can place foreign exchange trades accordingly.

Of course, the index does have shortcomings. Here are some that economists have noted.

Despite all of these limitations, the Big Mac Index does act as a good starting place for understanding purchasing power parity. Through the simplicity of burgers, complex economic theory is easier to digest.