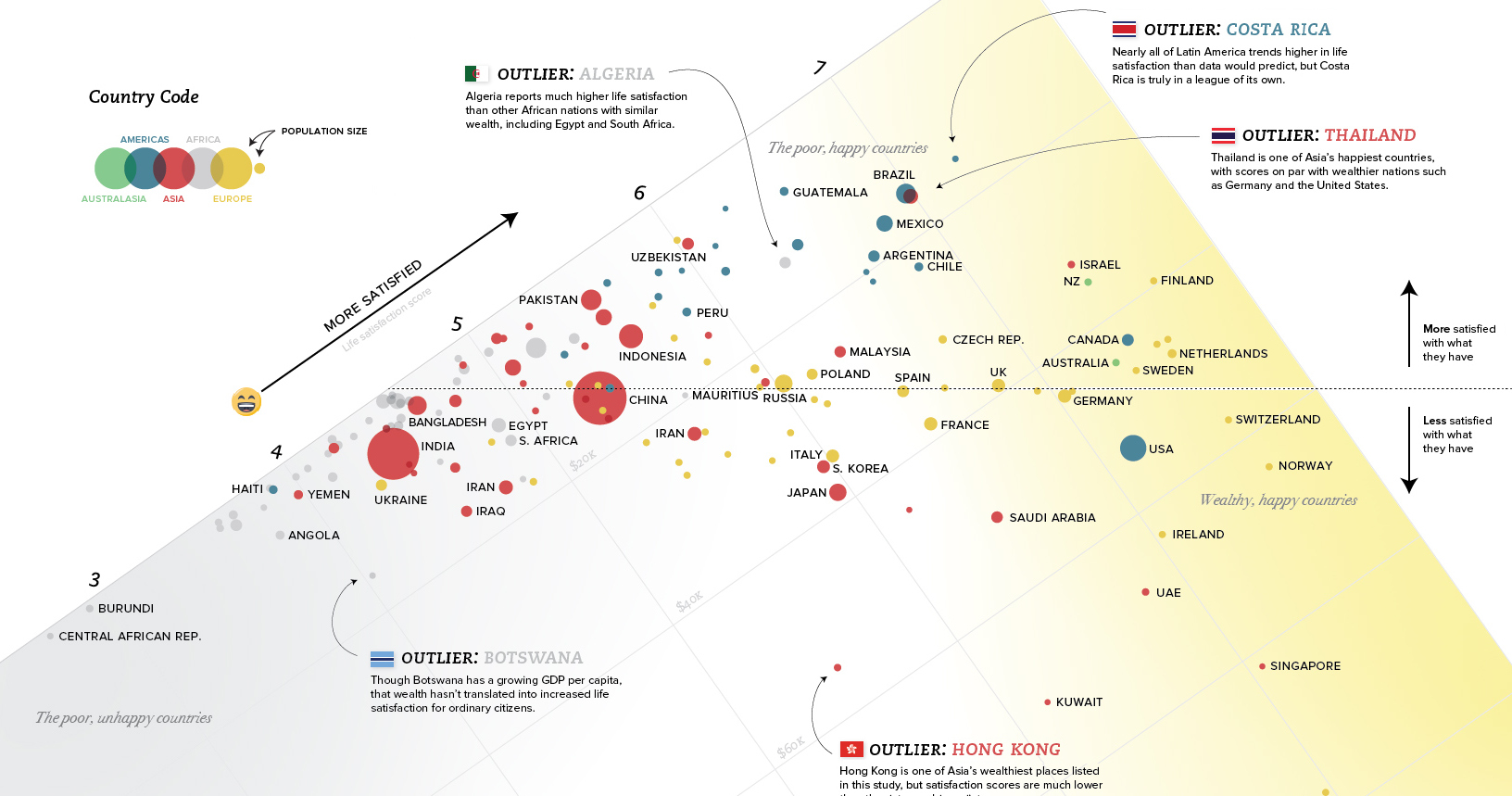 Charting the Relationship Between Money and Happiness

Can money buy you happiness?

It’s a longstanding question that has many different answers, depending on who you ask.

Today’s chart approaches this fundamental question from a data-driven perspective, and it provides one potential solution: money does buy some happiness, but only to a limited extent.

Let’s say you have two hypothetical people: one of them is named Beff Jezos and he’s a billionaire, and the other is named Jill Smith and she has a more average net worth. Who do you think would be happiest if their wealth was instantly doubled?

Beff might be happy that he’s got more in the bank, but materially his life is unlikely to change much – after all, he’s a billionaire. On the flipside, Jill also has more in the bank and is likely able to use those additional resources to provide better opportunities for her family, get out of debt, or improve her work-life balance.

These resources translate to real changes for Jill, potentially increasing her level of satisfaction with life.

Just like these hypotheticals, the data tells a similar story when we look at countries.

Today’s chart looks at the relationship between GDP per capita (PPP) and the self-reported levels of happiness of each country. Sources for data are the World Bank and the World Happiness Report 2017.

According to the numbers, the relationship between money and happiness is strong early on for countries. Then later, when material elements of Maslow’s hierarchy are met, the relationship gets harder to predict.

In general, this means that as a country’s wealth increases from $10k to $20k per person, it will likely slide up the happiness scale as well. For a double from $30k to $60k, the relationship still holds – but it tends to have far more variance. This variance is where things get interesting.

Some of the most obvious outliers can be found in Latin America and the Middle East: In Latin America, people self-report that they are more satisfied than the trend between money and happiness would predict.

Costa Rica stands out in particular here, with a GDP per capita of $15,400 and a 7.14 rating on the Cantril Ladder (which is a measure of happiness). Whether it’s the country’s rugged coastlines or the local culture that does the trick, Costa Rica has higher happiness ratings than the U.S., Belgium, or Germany – all countries with far higher levels of wealth.

In the Middle East, the situation is mostly reversed. Countries like Saudi Arabia, Qatar, Iran, Iraq, Yemen, Turkey, and the U.A.E. are all on the other side of the trend line.

Within regions, there is even plenty of variance.

We just mentioned the Middle East as a place where the wealth-happiness continuum doesn’t seem to hold up as well as it does in other places in the world.

Interestingly, in Qatar, which is actually the wealthiest country in the world on a per capita basis ($127k), things are even more out of whack. Qatar only scores a 6.37 on the Cantril Ladder, making it a big exception even within the context of the already-outlying Middle East.

Nearby Saudi Arabia, U.A.E., and Oman are all poorer than Qatar per capita, yet they are happier places. Oman rates a 6.85 on the satisfaction scale, with less than one-third the wealth per capita of Qatar.

There are other outlier jurisdictions on the list as well: Thailand, Uzbekistan, and Pakistan are all significantly happier than the trend line (or their regional location) would project. Meanwhile, places like Hong Kong, Ireland, Singapore, and Luxembourg are less happy than wealth would predict.

The Jump from Millionaire to Billionaire, and How Long That Takes

Ranked: The World’s Black Billionaires in 2021

Black billionaires make up fewer than 1% of all billionaires worldwide. Who are they, and how have they built their wealth? 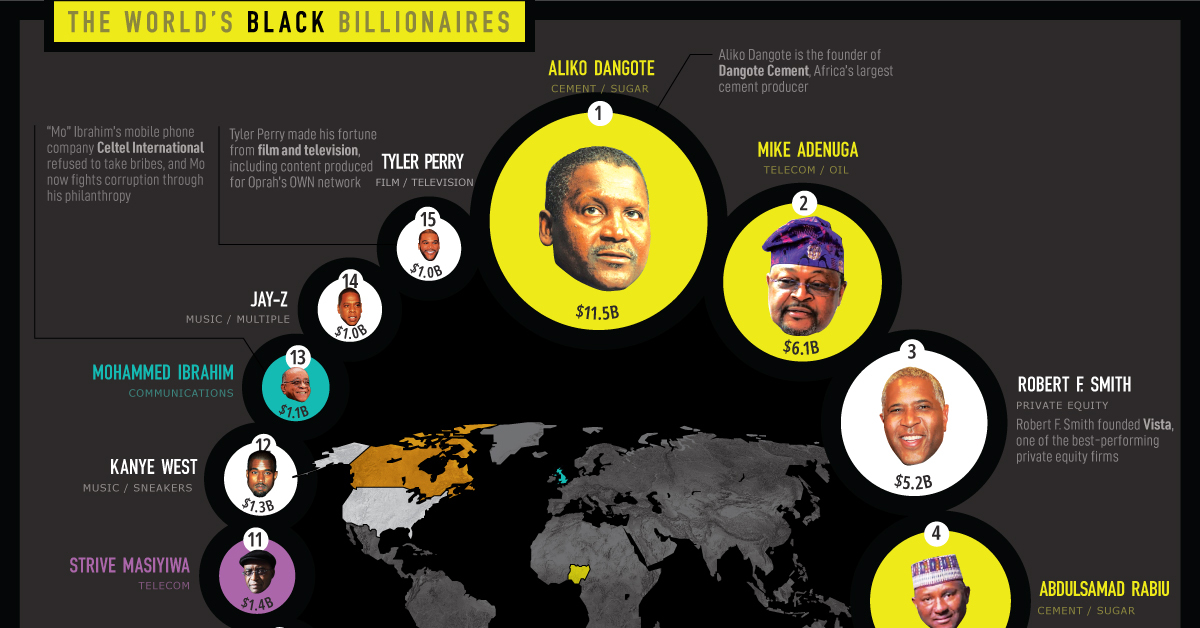 The World’s Black Billionaires in 2021

Black billionaires make up fewer than 1% of all billionaires worldwide. Who are the select few who made it into the ranks of the world’s richest people?

In this graphic, we used the Forbes real-time billionaire list to highlight the most financially successful Black people, and the source(s) of their wealth.

The data is as of February 24, 2021, and includes bi/multi racial individuals with Black ancestry. Altogether, there are 15 Black billionaires with a combined wealth of $48.9 billion.

Here is the how the full list breaks down:

Aliko Dangote is the richest Black billionaire, and has held the title since 2013. He owns 85% of publicly-traded Dangote Cement, Africa’s largest cement producer. The company’s stock price went up more than 30% over the last year. In addition, Dangote also has investments in salt and sugar manufacturing companies.

The fifth richest Black person, David Steward, owns the technology solutions provider World Wide Technology. Steward had decided he wanted to be part of the technological revolution and founded the company in 1990, before the first internet browser had even been created. The company has since grown to be the largest Black-owned business in America with over $13.4 billion in annual revenue and more than 7,000 employees.

Best known for his music career, Shawn Carter, more commonly known as Jay-Z, is number 14 on the list. However, the rapper’s wealth goes far beyond his music. Jay-Z has built a diversified business empire, including investments in a fine art collection, an entertainment company, a clothing line, and alcohol brands. He recently sold half of his champagne brand to LVMH, the parent company of Dom Pérignon.

The number of Black billionaires also falls very short of being representative of the general population. For example, only 8 or 1.2% of America’s 665 billionaires are Black. By contrast, Black people make up 12.2% of the U.S. population.

There is still a large racial wealth gap between Black people and White people—even at the highest levels of financial achievement. However, despite these racial and systemic barriers, 14 of the 15 Black billionaires are self-made, meaning they built their wealth from the ground up. Who will be next to join the ranks?

“Innovation doesn’t happen without a person of color or a diversity of thought being at the table in order to challenge the status quo.”
—David Steward

This unique animated visualization uses health and wealth measurements to chart the evolution of countries over time. 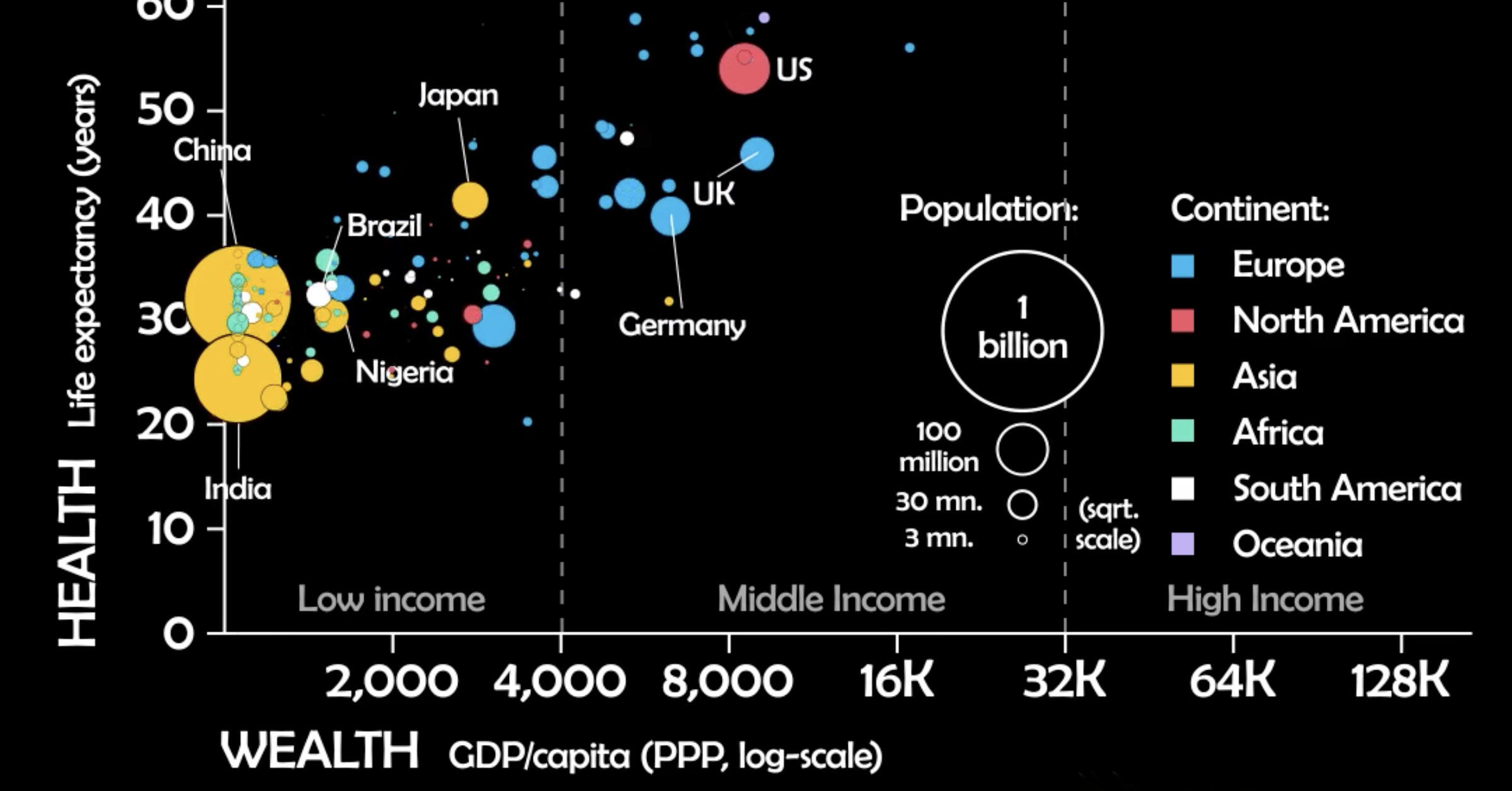