Electric vehicles (EVs) only accounted for around 3.2% of global car sales in 2020—a figure that’s set to grow in the coming decade, largely due to falling EV battery costs.

Wright’s Law is Right So Far

According to Wright’s Law, also known as the learning curve effect, lithium-ion (Li-ion) battery cell costs fall by 28% for every cumulative doubling of units produced.

Wright’s Law has accurately predicted the decline in battery costs and so far, reported battery prices have been in line with modeled forecasts. The battery pack is the most expensive part of an electric vehicle. Consequently, the sticker prices of EVs fall with declining battery costs.

By 2023, the cost of Li-ion batteries is expected to fall to around $100/kWh—the price point at which EVs are as cheap to make as gas-powered cars.

EVs are already cheaper to own and operate than comparable gas-powered cars due to savings from gas, maintenance, and resale value. Therefore, a reduction in retail electric vehicle prices may enable them to compete more directly with gas-powered cars.

The Electric Catch Up

Electric vehicles are a key piece of the puzzle in the transition to clean energy. Hence, growing consumer awareness around climate change is a catalyst for the EV space.

However, as EV production increases, so does the need for various critical minerals, charging infrastructure, and more. Price is just one of the hurdles that EV manufacturers need to overcome on the road to mainstream EV adoption.

Mapped: The 25 Richest Countries in the World

33% of the world’s population is under 20, making young people the largest demographic worldwide. But this might not be the case forever. 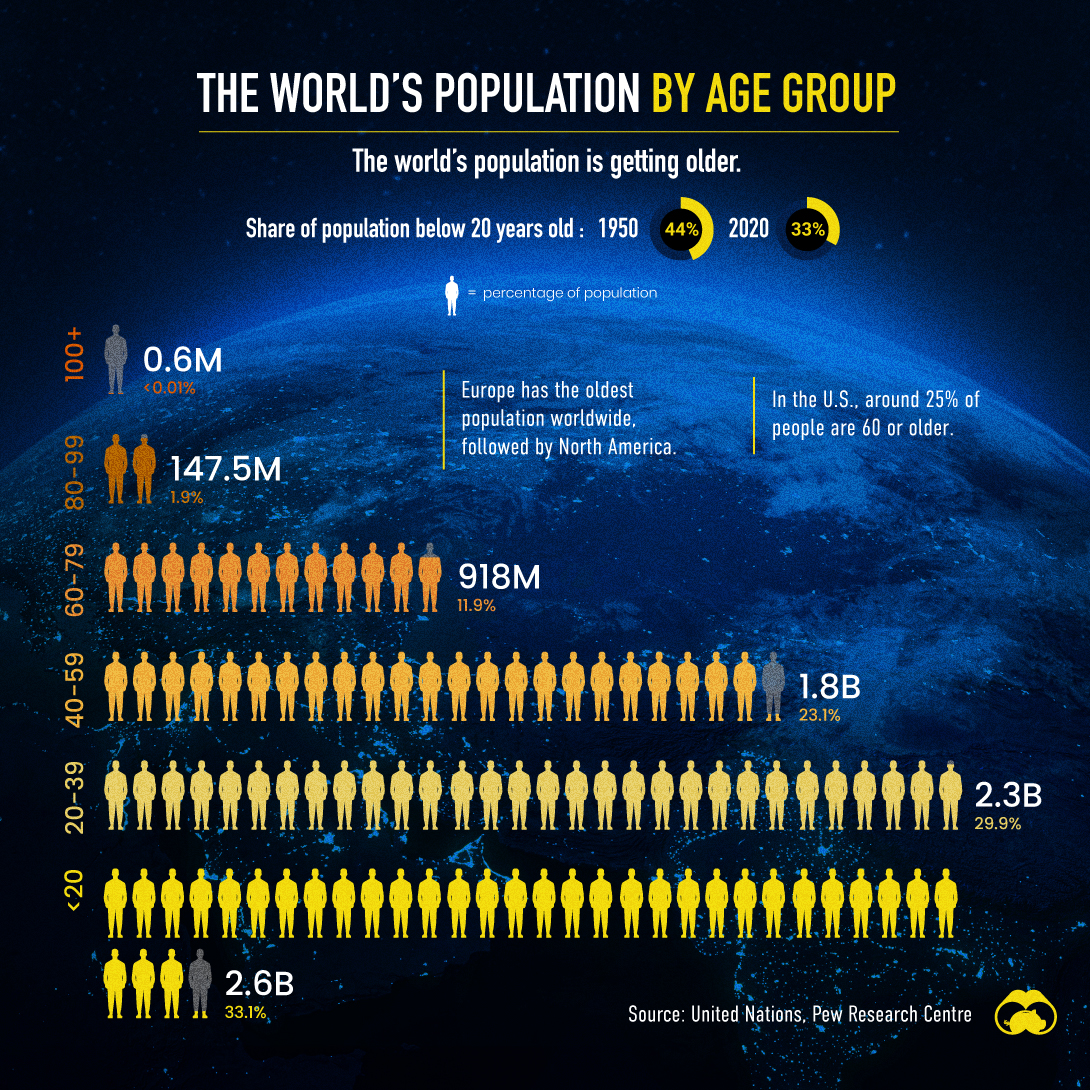 An aging population can have far-reaching consequences on a country’s economy.

With this in mind, today’s graphic looks at the age composition of the global population in 2020, based on the latest figures from the United Nations.

Our global population is getting older, largely because of increasing life expectancies and declining birth rates.

While that percentage may seem small, that particular demographic accounted for merely 0.05% of the population in 1950, meaning our world has a notably higher percentage of older people than it did 70 years ago.

Why is this significant? An aging population typically means a declining workforce and an increase of people looking to cash in their pensions. This can put pressure on the working class if taxes are raised.

Of course, an aging population can have positive impacts on society as well. For instance, elderly citizens tend to volunteer more than other age groups. And research has shown that older communities have lower crime rates. By 2050, the crime rate in Australia expected to drop by 16% as the country’s population gets older.

To mitigate some of the risks associated with a rapidly aging population, certain countries are working towards more sustainable pension systems, to support aging citizens while taking the stress off the working population.

Euro 2020: Qualified Nations and Past Winners

After a year-long delay, the 2020 UEFA European Championship is back with new rules, reduced spectators, and fierce competition. After a year-long delay, the 2020 UEFA European Championship is set to kick off what will be the largest international sports tournament to take place since the pandemic.

While the final stage of the tournament typically takes place in one or two nations, this year’s will be played across 11 different countries.

Running from June 11th to July 11th 2021, the opening game between Italy and Turkey will kick off at the Stadio Olimpico in Rome, and the final will take place at London’s Wembley Stadium.

COVID-19’s Impact on Teams and Spectators

Aside from the initial year-long delay, COVID-19 has changed how teams and spectators will participate in the tournament.

Squads have been expanded from 23 to 26 players, and coaches will be permitted to call up more players if COVID-19 infections force players into isolation.

For spectators, individual stadiums within host cities have announced varying capacities ranging from 20-100%, with strict stadium entry requirements across the board. Since these capacities are pre-tournament estimates, we’ll have to wait until matchday to see how many ticket-holders are comfortable attending the fixtures in person.

This edition of the tournament will also feature two new rule changes to the action on the field.

Coaches will now be able to make up to five substitutions (six if the match goes to extra time), a change first introduced in domestic leagues to allow players more rest as match calendars became congested.

Another key change which was already in play at the 2018 FIFA World Cup is the Video Assistant Referee (VAR) system. This system appoints a match official who reviews the head referee’s decisions with video footage, and allows the head referee to conduct an on-field video review and potentially change decisions.

Despite current world champions France remaining as undeniable favorites, bookies are putting England to win the tournament (despite a fairly young squad) partially due to the home field advantage in the semi-finals and final.

Spain, Germany, and Italy remain formidable competitors, and Belgium’s golden generation will have one final shot at silverware after their third place finish at the 2018 FIFA World Cup.

European champions Portugal are another obvious threat, as Cristiano Ronaldo will be looking to become the tournament’s top goalscorer of all time (currently tied with Michel Platini at 9 goals).

While the 2020 edition of UEFA’s European Championship features a variety of on-field and off-the-field changes, the trophy truly feels up for grabs and is a welcome return to international football for fans around the world.