We often use big, overarching ideas to help us understand the world and the opportunities contained within. These narratives, which can change over time, are used to create context. They give us a frame of reference for comprehending the news and events that affect our outlook on things.

China’s economic prowess is one of these new paradigms that has emerged, but many people still can’t really wrap their heads around the scale or scope of it.

It’s happened suddenly, and the ramifications are extremely relevant to our investments and understanding. Here’s four maps on China’s trade dominance that will help you think differently about the world:

China is the world’s #1 trade partner 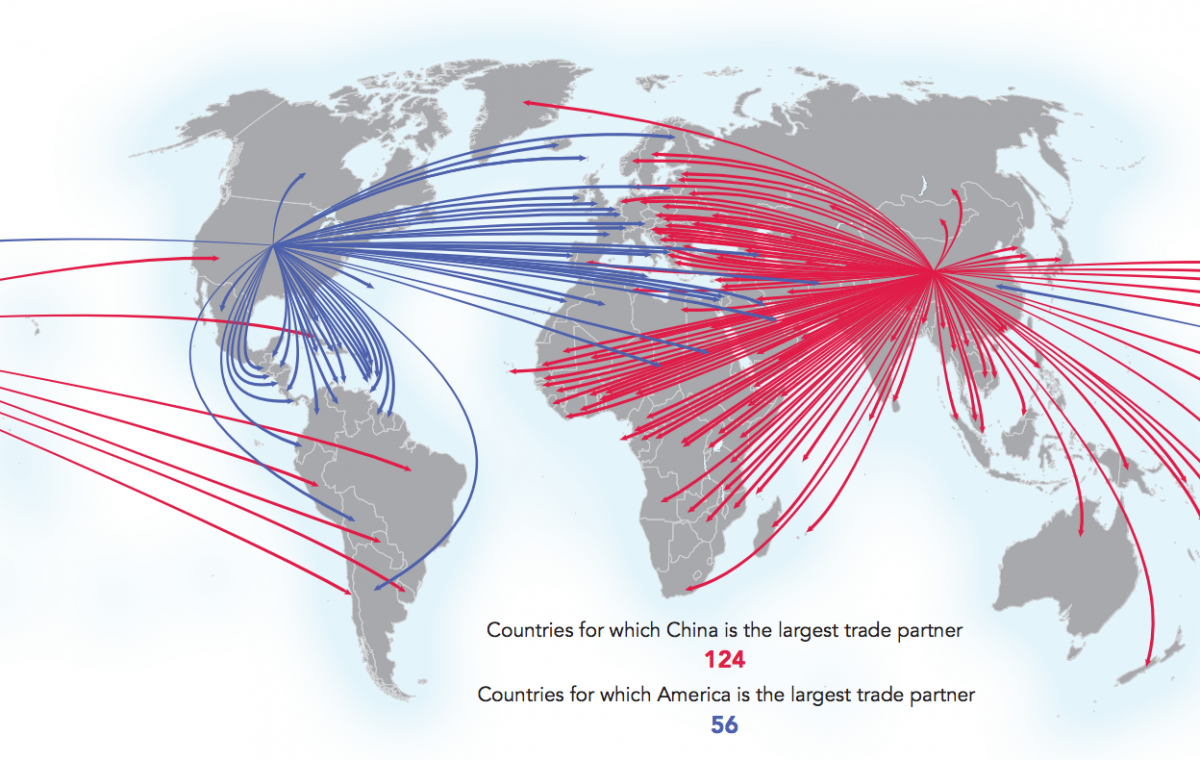 The United States is the number one trading partner for 56 countries, with important relationships throughout North America, South America, and Western Europe.

This map shows the portion of trade conducted by each country with China in Southeast Asia. The influence that China has with nations in Southeast Asia is significant. Most trade is in double-digit percentages, and China views this as its immediate sphere of influence. Throughout history, territories in this region would even pay tribute to China to gain access to trade.

“In East Asia’s tribute system, China was the superior state, and many of its neighboring states were vassal states, and they maintained a relationship of tribute and rewards,” writes Liu Mingfu in The China Dream, a popular book about China’s plans to return to power.

Maintaining influence in Southeast Asia is part of the reason that Beijing is posturing in the South China Sea. In fact, China’s coastguard is growing so fast that in 10 years it will have more tonnage than all of the coastguards in Southeast Asia, the United States, and Japan combined. China seeks to increase trade ties with Asia and Europe even further by building a new Silk Road that puts even Marco Polo’s route to shame.

The Chinese transcontinental network, a massive infrastructure project pegged for completion by 2025, is expected to bring down overland travel time from Beijing to London to just two days. Currently, it takes 15 days for the journey.

The project’s aim is to shorten the time of bulk consumer-goods transport to Europe, while unlocking the economic potential behind Eurasian cities from Almaty to Tehran. The new Silk Road will include at least one high-speed line that goes 320 km/h, and the network will help to link up 70% of the world’s population in roughly 40 countries.

You may have heard of the AIIB (Asian Infrastructure Investment Bank), which was officially launched at the end of last year. Initially proposed by China, the bank now has over a $100 billion of capitalization and 57 founding member states. While this shows China’s push for infrastructure especially to coincide with its new Silk Road, there is another very interesting detail: Beijing controls 26.06% of the votes, essentially giving it veto power as most bank decisions need 75% of the votes to pass.

In other words, only infrastructure projects that benefit Chinese trade will likely get the nod from Beijing.

The Global Economy in Pictures: April 2016