For decades, Google search has been a go-to source for many when looking up directions, keeping up with the news, or seeking information on new and unfamiliar topics.

Today, Google processes about 3.5 billion searches per day. Because of its dominant market share, Google holds a vast archive of keyword searches that, when analyzed, provide an interesting glimpse into the key themes that have captured the world’s attention over the years.

This graphic, using data from Google Trends, goes back 20 years and highlights some of the top keyword searches since 2001.

Our editorial team dug through hundreds of top trending search terms from global and U.S. data and hand-selected their top picks, which are featured in the graphic above.

Before diving in, it’s worth emphasizing how top trending searches differ from popular searches, which are measured by sheer volume.

Trending searches are terms that have recently spiked in popularity. They focus on growth rather than total volume, and in this dataset, trending terms gauge year-over-year growth.

A good example is Donald Trump, who popped up in the news cycle during the 2016 presidential campaign. After the election, interest in Trump remained high. But his name doesn’t pop up on the Google trends list after 2017, since by that point, search volume for Trump had plateaued.

What are the most popular Google search terms, by volume? To be honest, they’re slightly less interesting than the top trending searches — YouTube is number one, followed by Facebook, then WhatsApp web.

The Globalization of Search Trends

The people and topics featured in Google’s top trends lists evolves as time goes on, reflecting broader adoption of the internet (and Google Search) around the world over time. Early themes are tied to mainstream U.S. pop culture and tech trends.

As time goes on, social media and smartphone adoption increase the granularity and volume of searches, resulting in top trends that are more participatory, diverse, and global in nature.

One final variable to keep in mind is that Google itself began to share more detailed search highlights with each passing year.

Now that we’ve explained what trending searches actually measure, let’s dig into some of the key themes that have emerged over the last two decades of Google searches.

Over the last 20 years, sports have remained a continuous trend.

Every four years, the World Cup shows up as a top trending keyword across the globe. The Olympics also makes a regular appearance, along with Olympic athletes like Michael Phelps and McKayla Maroney.

Although the U.S. dominates the list, particularly when it comes to athletes, there’s still a good variety of international sports that go viral, especially as time goes on. In the last two years, cricket, rugby, and soccer have all made the top five trending lists.

② The Emergence of Celebrity 2.0

Over time, you can also see a transition from the conventional celebrity to celebrity 2.0, also known as the social media celebrity.

But by 2011, YouTube stars like Rebecca Black started to make their way on the trending search lists. And in 2014, Meme emerged as a top trending category.

This transition nods to a larger shift in media, as digital has gradually overtaken traditional media as the dominant form of entertainment.

Natural Disasters are a key trend throughout this data set as well.

Hurricanes are a particularly trendy word, showing up almost half the time—in eight of the 20 years. In 2005, Hurricane Katrina ranked second in the most searched category across the globe.

Our team enjoyed sifting through 20 years of Google data, and we hope you enjoyed this blast from the past too. If you’d like to dive deeper, you can explore Google’s full dataset here.

Visualizing Which Countries Drink the Most Beer This graphic shows the 32 teams that will be playing in the 2022 FIFA World Cup, and breaks down the groups and each team’s World Ranking 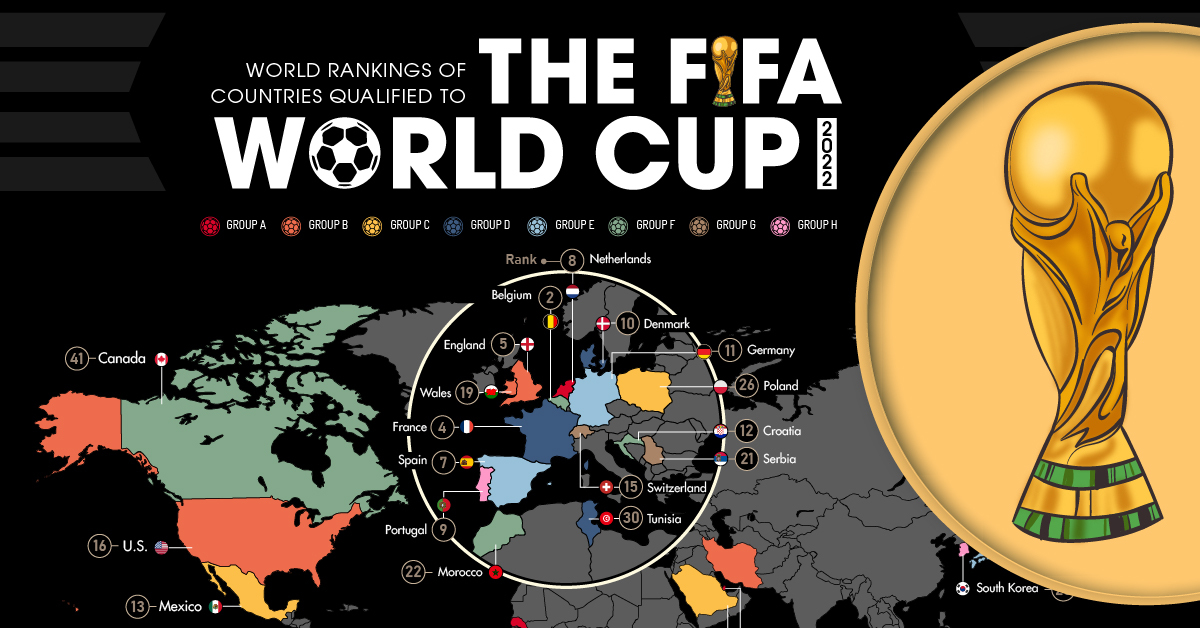 The FIFA World Cup is one of the most-watched sporting events in the world—in 2018, nearly 3.6 billion people tuned in to watch the tournament.

Starting on November 20th, that excitement will return as 32 teams from around the world will compete in the 22nd FIFA World Cup Championship in Qatar.

This graphic by Athul Alexander shows the teams that will be playing against one another this year, and their latest pre-tournament FIFA rankings.

The Ranks of the 32 Qualifying Teams

The FIFA World Ranking is used to compare the 211 teams that are part of the FIFA association. They attempt to measure the progression and current ability of the each national football team.

The ranking is determined using a number of different metrics, including the number of games a team has won and how “important” those results were, such as in major tournaments or against strong opponents.

But high-ranking teams don’t qualify for the World Cup directly. Instead, ranks are used for seeding in regional qualifying tournaments, as each region (also known as a “confederation”) has a select number of slots.

This means that every World Cup, many lower-ranked teams end up qualifying for the event over higher-ranked teams. For 2022, the biggest example of this is Italy’s national team (ranked #6), which failed to qualify.

Next on the ranking is Belgium, with 1816.71 points. Belgium has yet to win the World Cup, however, in 2018 they made it to the semi-finals and ended up getting third place.

Each team’s ranking upon qualifying for the FIFA World Cup tournament is also used for seeding purposes to establish the groups.

The association first organizes the teams into four pots, based on their FIFA Ranking. Then, groups are established by randomly drawing teams from each pot.

Here’s a look at the eight different groups for 2022:

The groups can’t have more than two teams from the same region, with the exception of Europe, which has double the amount of slots.

These groups will play each other in the first stage of the tournament, after which the top two teams from each group will move on to the bracket round.

What’s expected for this year? While it’s technically anyone’s game, Brazil has a 15/4 chance of winning this year’s cup, according to bet365.