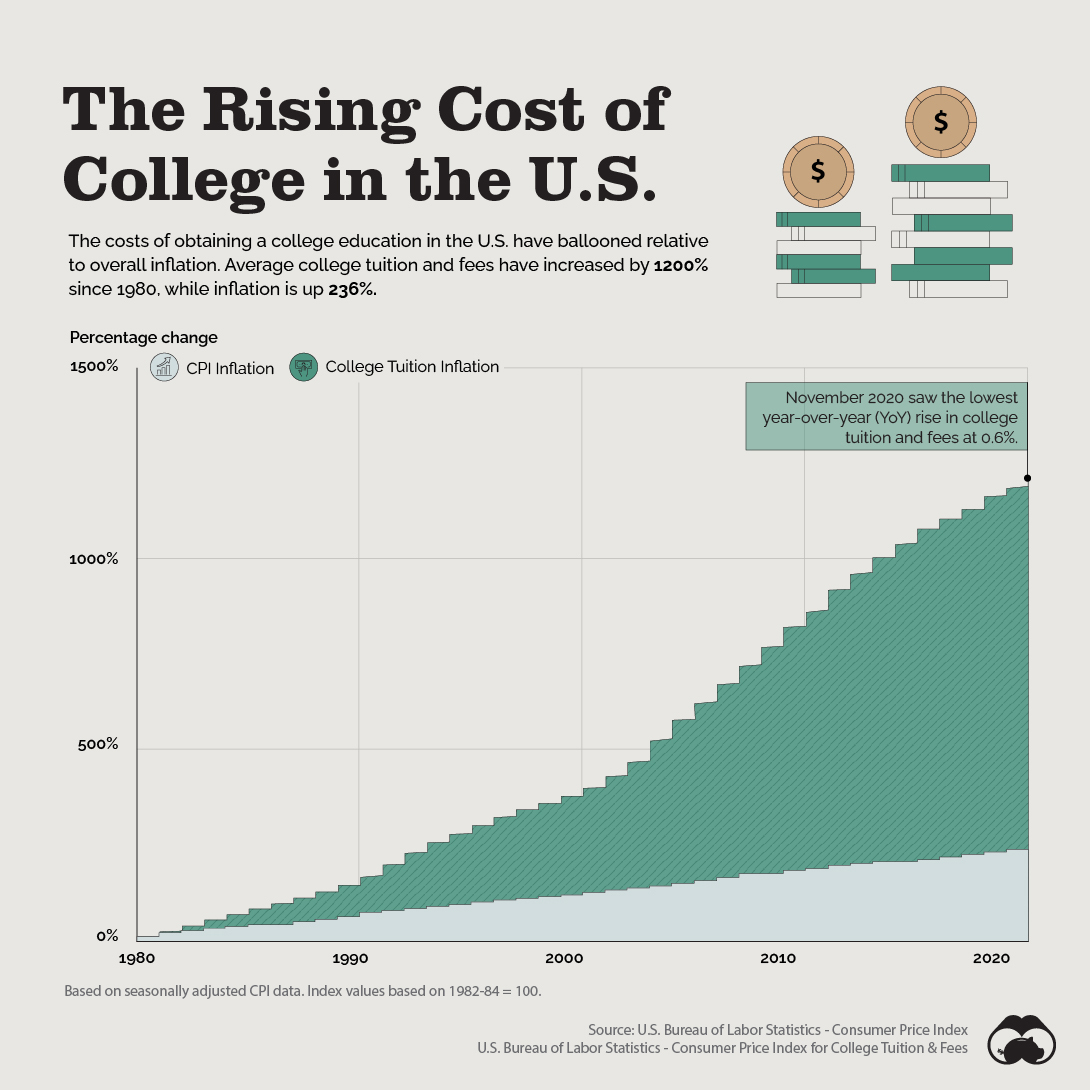 The Rising Cost of College in America

The average cost of getting a college degree has soared relative to overall inflation over the last few decades.

The Average Cost of College Over Time

Since then, the figures have skyrocketed. Here’s how college tuition and the CPI have both changed since 1980:

Source: National Center for Education Statistics, U.S. News
Note: Tuition and fees are in constant 2018-19 dollars. For public schools, in-state tuition and fees are used. All CPI % change values calculated for the month of January.

According to the Bureau of Labor Statistics, the highest year-over-year change in college tuition and fees was recorded in June 1982 at 14.2%— and over that same time period, overall inflation was up 6.6%.

On the other hand, November 2020 saw the lowest year-over-year change in the average cost of college at 0.6%, mainly as a result of the shift to online classes amid the COVID-19 pandemic. In fact, some schools are offering discounts to students, and some are even canceling scheduled tuition increases entirely in a bid to remain attractive.

Why is the Cost of College Rising?

While it’s difficult to pinpoint the exact reasons behind the rapid surge in the cost of education, a few factors could help explain why U.S. colleges hike their prices.

Furthermore, the costs of providing education, known as institutional expenditures, have also escalated over time. These include spending on instruction, student services, administrative support, operations, and maintenance—all of which are critical to the student experience.

With student debt at unprecedented levels and ongoing public debates surrounding the rising costs of education, it’s uncertain how college tuition will evolve. However, given the onset of virtual classes, further hikes to college tuitions may be on hold for the foreseeable future.

Source: U.S. Bureau of Labor Statistics
Details: Data for the average cost of college comes from the Consumer Price Index (CPI) for College Tuition and Fees. Overall inflation is measured by the CPI for all items (CPI-U). Data is seasonally adjusted and the reference base for the indices is 1982-84 = 100.