How many airplanes do the world’s major airlines utilize in their fleets, and which models do they prefer?

Some prefer newer planes, such as the Boeing 787 Dreamliner which came into service in the 2010s. Others prefer large planes, like the Airbus A380 , the world’s largest passenger aircraft. A few carriers, like Air France–KLM, opt for variety. The airline uses 16 different active models. This contrasts with Southwest Airlines, which utilizes a single model in its fleet.

This series of graphics visualizes some of the world’s most well-known airliners by fleet composition, using fleet data from Planespotters.net as of May 26, 2022.

How Many Planes Are in Airline Fleets?

Each plane in a fleet is tracked in meticulous detail, from its start of service date and age, to its registration number and current status.

Above we visualized the parent airline’s current fleets, which includes planes that are either in service or parked for future service. They do not include retired planes (the historic fleet) or future planes on order.

From conglomerates to flag carriers, here are some of the world’s most well-known airline fleets: 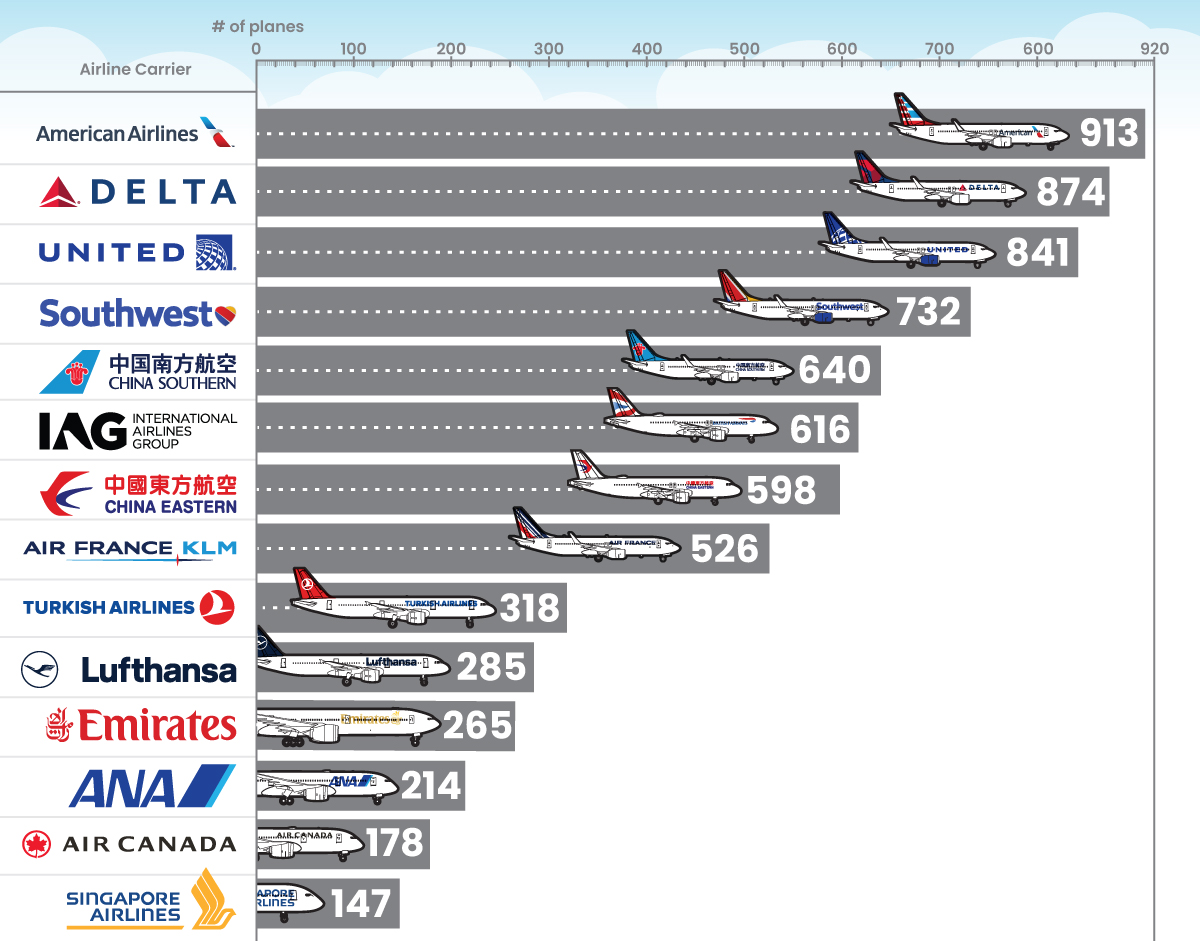 U.S. based airlines were far and away the largest aircraft carriers, with American Airlines being the world’s largest airline by fleet size since 2019. Interestingly, Delta Airlines was the largest by revenue in 2020, despite a smaller fleet size.

Asia’s largest airline has been China Southern, in both fleet size, revenue, and passengers carried. Together with China Eastern and the flag carrier Air China, it is part of China’s “Big Three” airlines.

But smaller airlines aren’t any less important, or lucrative. The slightly smaller fleet size of International Airlines Group (IAG), which was formed from a merger between flag carriers British Airways and Iberia, includes planes that fly on the world’s highest grossing routes. They’re joined on the list by other smaller fleets including UAE airliner Emirates, Singapore Airlines (often ranked as the world’s best airline), and Air Canada.

Boeing, Airbus, and Other Aircraft Manufacturers

The story of airline fleets usually breaks down to the world’s largest aircraft manufacturers, Europe’s Airbus and America’s Boeing.

Which manufacturers do the world’s popular airlines utilize? Here’s a breakdown of the same airlines from above, this time by manufacturer share:

Notably, European and Asian airlines have emerged as slightly bigger Airbus customers, while American carriers favor Boeing. There are also standouts, such as Southwest Airlines’ utilization of just one make, the Boeing 737.

And a few carriers used aircraft from other manufacturers as well. Brazil’s Embraer saw usage in IAG and Air France–KLM, making up 17% of the latter’s total fleet. Bombardier‘s CJR planes, formerly produced by the Canadian manufacturer but now owned by the Mitsubishi Aircraft Corporation, saw use by IAG, Air France–KLM, and Lufthansa. The Airbus A220 was also originally a Bombardier plane before being acquired by the European manufacturer in 2018.

China Southern Airlines was the only other airline to feature a different manufacturer’s plane in its active fleet, the ARJ21. Also known as the Xiangfeng (literally “soaring phoenix”), it was developed by Chinese state-owned manufacturer Comac and first introduced into service in 2016.

What Will Airlines Use in the Future?

Before the COVID-19 pandemic, Airbus was starting to outperform Boeing in market share.

In 2019, the worldwide grounding of the Boeing 737 MAX model after two crashes saw 387 active aircraft grounded and 1,200 canceled orders, a debacle that could go down as the most costly corporate blunder in history.

Soon after, Airbus took the global market share lead in new orders, with the Airbus A320 becoming the world’s highest selling family of aircraft in October 2019. But the COVID-19 pandemic quickly followed and severely impacted the entire aviation industry.

As countries, airliners, and manufacturers look to bounce back and recover, fleet compositions are sure to change in coming years.