Every year, millions of young children and adolescents get sick with the flu, or some sort of viral or bacterial infection.

For a small number of children, these infections trigger an autoimmune response that causes acute behavior changes. This response is called Children’s Postinfectious Autoimmune Encephalopathy (CPAE), and its symptoms appear similar to OCD or severe anxiety.

How can you tell if your child is suffering from a CPAE? This graphic, presented by the PACE Foundation, outlines the two types of CPAEs—PANS and PANDAS—and explains what symptoms to look for, and where to seek help if needed.

CPAE is a type of autoimmune disorder that causes your immune system to accidentally attack healthy cells. In the case of CPAE, this reaction is triggered by an infection.

The area of the body that’s affected by CPAE is the brain. Specifically, it attacks the basal ganglia, which is the same region of the brain that’s been linked to OCD and Tourette’s syndrome.

To date, there are two types of CPAEs:

Some key symptoms to look out for include:

It’s important to note that, when a child has PANS or PANDAS, their symptoms develop rapidly, or seem to come out of nowhere.

How to Treat PANS or PANDAS

If you think your child may have PANDAS or PANS, contact your child’s doctor right away.

While PANS or PANDAS could come back if your child gets a viral or bacterial infection again, there are a number of treatments that can help children manage their condition, so they can live healthy, nearly-symptom-free lives.

Antibiotics may be enough for some patients, while others might need a mixture of antibiotics, steroids, and/or psychiatric treatments.

There are several CPAE/PANS clinics throughout the U.S., founded by the PACE Foundation, which has helped facilitate a national standard of care for CPAE treatment throughout America.

Pace Treatment Centers Across the U.S.

The Pace Foundation has established partnerships with major universities and institutions, such as the National Institutes of Health (NIH) and the University of Arizona Center of Excellence, to treat children with CPAE.

While there’s still more to learn about these autoimmune disorders, there is hope for children diagnosed with PANS or PANDAS. For additional resources on diagnosis and treatment of CPAEs, visit the Pace Foundation’s website.

PACE Foundation is a non-profit dedicated to helping kids with CPAE and supporting their families through education, advocacy, and research.

Smashing Atoms: The History of Uranium and Nuclear Power

Nuclear power is among the world’s cleanest sources of energy, but how did uranium and nuclear power come to be? 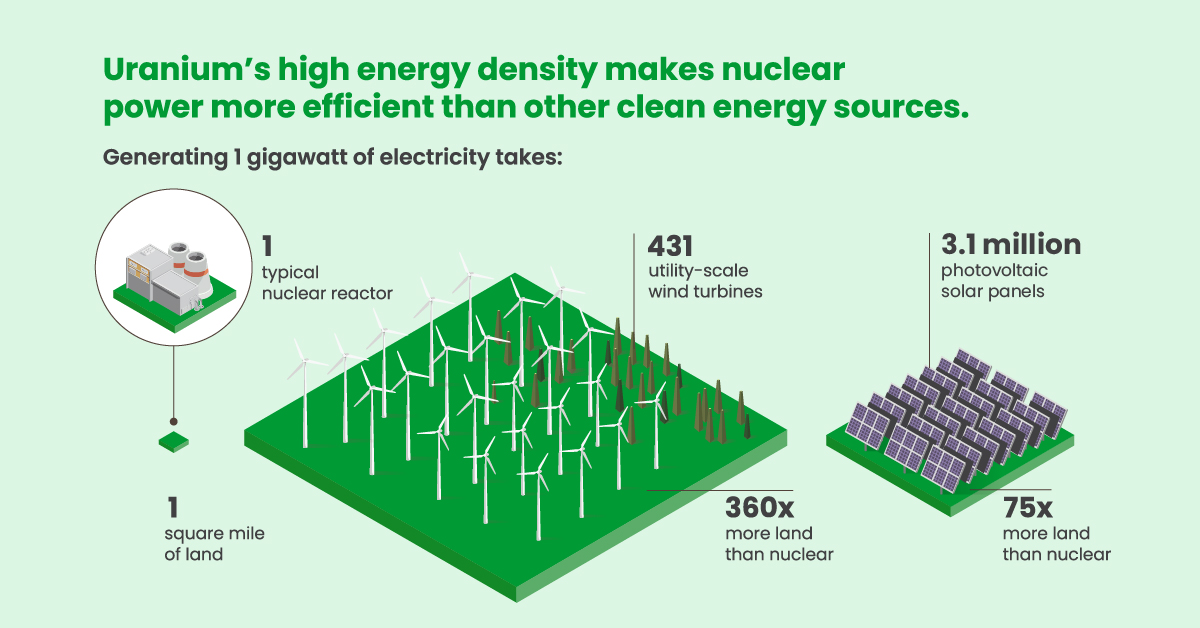 The History of Uranium and Nuclear Power

Uranium has been around for millennia, but we only recently began to understand its unique properties.

Today, the radioactive metal fuels hundreds of nuclear reactors, enabling carbon-free energy generation across the globe. But how did uranium and nuclear power come to be?

The above infographic from the Sprott Physical Uranium Trust outlines the history of nuclear energy and highlights the role of uranium in producing clean energy.

From Discovery to Fission: Uncovering Uranium

Just like all matter, the history of uranium and nuclear energy can be traced back to the atom.

Martin Klaproth, a German chemist, first discovered uranium in 1789 by extracting it from a mineral called “pitchblende”. He named uranium after the then newly discovered planet, Uranus. But the history of nuclear power really began in 1895 when German engineer Wilhelm Röntgen discovered X-rays and radiation, kicking off a series of experiments and discoveries—including that of radioactivity.

In 1905, Albert Einstein set the stage for nuclear power with his famous theory relating mass and energy, E = mc2. Roughly 35 years later, Otto Hahn and Fritz Strassman confirmed his theory by firing neutrons into uranium atoms, which yielded elements lighter than uranium. According to Einstein’s theory, the mass lost during the reaction changed into energy. This demonstrated that fission—the splitting of one atom into lighter elements—had occurred.

“Nuclear energy is incomparably greater than the molecular energy which we use today.”

Following the discovery of fission, scientists worked to develop a self-sustaining nuclear chain reaction. In 1939, a team of French scientists led by Frédéric Joliot-Curie demonstrated that fission can cause a chain reaction and filed the first patent on nuclear reactors.

Later in 1942, a group of scientists led by Enrico Fermi and Leo Szilard set off the first nuclear chain reaction through the Chicago Pile-1. Interestingly, they built this makeshift reactor using graphite bricks on an abandoned squash court in the University of Chicago.

These experiments proved that uranium could produce energy through fission. However, the first peaceful use of nuclear fission did not come until 1951, when Experimental Breeder Reactor I (EBR-1) in Idaho generated the first electricity sourced from nuclear power.

The Power of the Atom: Nuclear Power and Clean Energy

Nuclear reactors harness uranium’s properties to generate energy without any greenhouse gas emissions. While uranium’s radioactivity makes it unique, it has three other properties that stand out:

Thanks to its high energy density, the use of uranium fuel makes nuclear power more efficient than other energy sources. This includes renewables like wind and solar, which typically require much more land (and more units) to generate the same amount of electricity as a single nuclear reactor.

But nuclear power offers more than just a smaller land footprint. It’s also one of the cleanest and most reliable energy sources available today, poised to play a major role in the energy transition.

The Future of Uranium and Nuclear Power

Although nuclear power is often left out of the clean energy conversation, the ongoing energy crisis has brought it back into focus.

Several countries are going nuclear in a bid to reduce reliance on fossil fuels while building reliable energy grids. For example, nuclear power is expected to play a prominent role in the UK’s plan to reach net-zero carbon emissions by 2050. Furthermore, Japan recently approved restarts at three of its nuclear reactors after initially phasing out nuclear power following the Fukushima accident.

The resurgence of nuclear power, in addition to reactors that are already under construction, will likely lead to higher demand for uranium—especially as the world embraces clean energy.

Canadian gold mining has grown to become a highly prolific industry, thanks to its geological riches and political stability. Gold mining has long played an integral role in shaping Canada’s cities and its modern day economy. The gold mining infrastructure that was built alongside the country’s towns in the 19th century has grown to provide $21.6 billion worth of exports for Canada in 2020.

When combined with the country’s superb geology, Canada’s jurisdictional strengths make it one of the most prolific and secure locations in the world for mining companies to explore, develop, and produce gold.

This infographic sponsored by Clarity Gold dives into how Canada has grown into a nation built for gold mining. Both in how the country facilitates the production of gold, and how the gold mining industry supports Canada’s economy and local communities.

Gold is scattered across the Canadian landscape in a variety of gold mining regions and districts, with the most prolific located between Ontario and Québec.

The 2 billion year-old Archean greenstone belt that arcs through the centre of the Canadian shield provides the foundation for the Abitibi gold belt, which has produced more than 190Moz of gold.

The Trans-Hudson corridor in Saskatchewan and Manitoba has produced more than 40Moz of gold, while the Red Lake mining district of eastern Ontario and the Golden Triangle in British Columbia have delivered >30Moz and >5Moz respectively.

Ontario and Québec are the powerhouse provinces of Canadian gold production, hosting 30 mines between the two provinces.

A Nation Built for Gold Mining

Canada’s politically secure nature and established permitting process has resulted in five of the 10 largest gold mining companies having projects in Canada. Three Canadian provinces (Saskatchewan, Québec, and Newfoundland & Labrador) are among the world’s 10 most attractive mining investment jurisdictions according to the Fraser Institute’s 2020 survey of mining companies.

Beyond the legal and permitting strengths of the nation, Canada’s extensive network of capital markets has enabled the Canadian companies to dominate the world’s gold mining industry. With Agnico Eagle and Kirkland Lake’s upcoming merger, three of the world’s top five gold mining companies will be headquartered in Canada.

The Canadian equity markets are a key driver of the world’s gold exploration and development funding, with the TSX having raised $7.5 billion in mining equity capital in 2020. Gold still remains the major driver of these money flows, with gold mining companies making up more than half of Canada’s mining exploration budget.

How Gold Mining Gives Back to Canada

Ever since the first discoveries of gold across Canada in the 1800s, the development and production of gold mines has been the foundation for many towns and merchants across the nation.

Today, Canada’s mining industry directly employs more than 392,000 Canadians, with the sector offering the highest average annual industrial rate of pay in the country at $123,000. The industry is also proportionally the largest private sector employer of Indigenous peoples in Canada.

From the nation’s prolific gold deposits to its network of funding through robust public markets for mining equities, gold mining has grown into one of Canada’s most important strengths. The discovery, development, and production of the precious metal will remain an essential pillar of Canada’s economy.