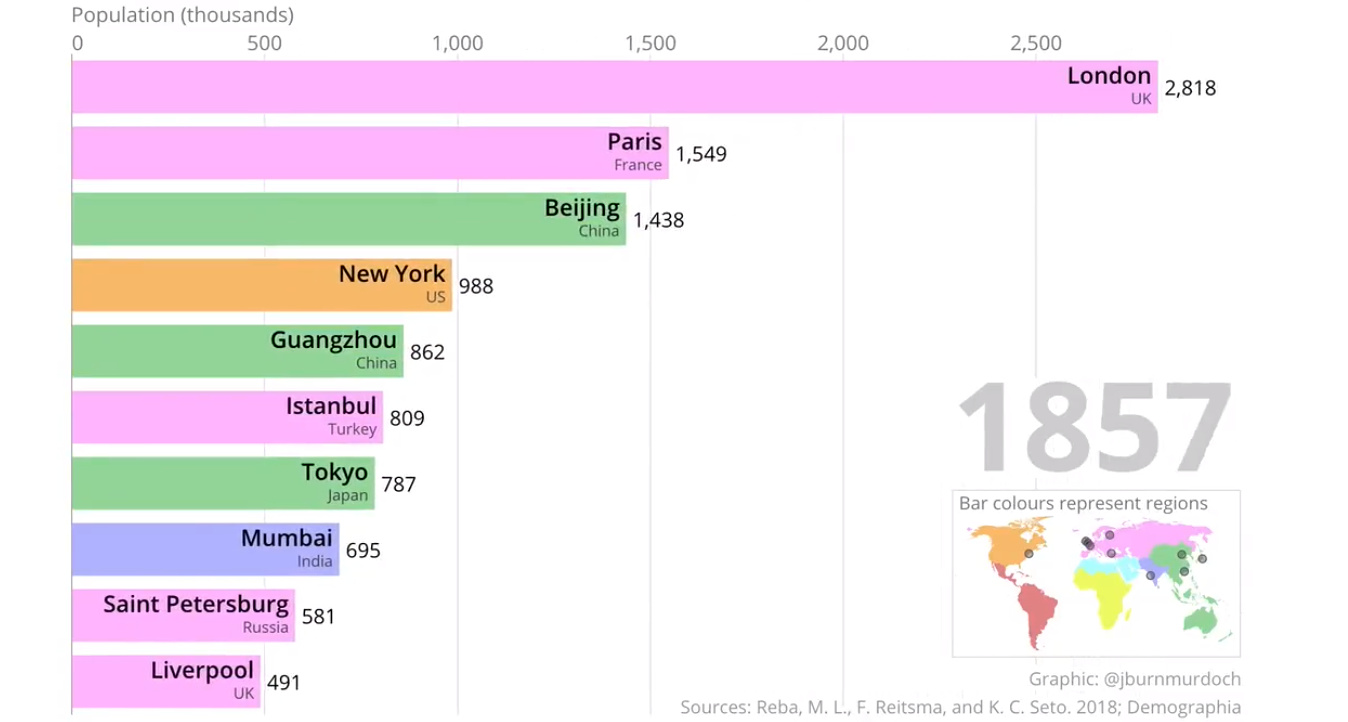 Animation: The Most Populous Cities, Over 500 Years

What do Beijing, Tokyo, Istanbul, London, and New York City all have in common?

Not only are they all world-class cities that still serve as global hubs of commerce, but these cities also share a relatively rare and important historical designation.

At specific points in history, each of these cities outranked all others on the planet in terms of population, granting them the exclusive title as the single most populated city globally.

Ranking the World’s Most Populous Cities

Today’s animation comes to us from John Burn-Murdoch with the Financial Times, and it visualizes cities ranked by population in a bar chart race over the course of a 500-year timeframe.

In the 16th century, which is where the animation starts, cities in China and India were dominant in terms of population.

In China, the cities of Beijing, Hangzhou, Guangzhou, and Nanjing all made the top 10 list, while India itself held two of the most populous cities at the time, Vijayanagar and Gauda.

If the latter two names sound unfamiliar, that’s because they were key historical locations in the Vijayanagara and Bengal Empires respectively, but neither are the sites of modern-day cities.

For the first minute of animation—and up until the late 18th century—not a single city was able to eclipse the 1 million person mark.

However, thanks to the Industrial Revolution, the floodgates opened up. With more efficient agricultural practices, better sanitation, and other technological improvements, cities were able to support bigger populations.

In the span of roughly a century, all of the world’s biggest cities were able to pass the 1 million mark, making it no longer a particularly exclusive milestone.

Finally, let’s look at the modern list of the top 10 most populous cities, and see how it compares to rankings from previous years:

Interestingly, the modern list appears to be a blend of both previous rankings from the years 1500 and 1895, listed above.

In 2018, cities from China and India feature prominently, but New York City and Tokyo are also included. Meanwhile, Latin America has entered the fold with entries from Mexico and Brazil.

The Future of Megacities

If you think the modern list of the most populous cities is impressive, check out how the world’s megacities are expected to develop as we move towards the end of the 21st century.

Interactive: How Do Americans Differ by Age?

How Different Generations Think About Investing

When will India’s population overtake China’s? Take a look at the trends behind this impending demographic milestone. One of the biggest demographic milestones that our world faces is less than a decade away.

Today, China and India boast the largest populations, outpacing all others by a mile. The total populations of these two nations have been climbing for years, but India is moving at a faster clip. The big question is: When will India overtake China in population?

This interactive chart by Our World in Data pulls past and projected population data from the United Nations, comparing the 300-year trajectory of China vs. India to answer this burning question.

In 1800, India’s population was at a modest 169 million. In contrast, the Chinese population was nearly double that with 322 million at the turn of the 19th century.

It wasn’t until 1950 that the total populations of both countries started shooting up exponentially, and here’s where it starts to get interesting. China reached the 1 billion milestone in 1980, while India took a little longer to get there in 1997.

And now, India is on target to overtake China’s total population in 2026, when both countries are expected to be at the 1.46 billion people mark.

*Note: Absolute change numbers may not be exact due to rounding.

Although the populations of both countries will begin contracting in the mid-21st century, India is expected to stay atop the global population leaderboard even by more moderate estimates.

While it appears that population growth in India is effectively mirroring that of China, there’s more to examine under the surface.

What demographic trends lie behind the eventual contraction later this century? Let’s look at the two population pyramids to find out.

In China, growth has been underscored by a strict “one-child” policy, implemented in 1979. Even with the updated “two-child” policy in 2016, there’s no coming back from this decision—China is now contending with a rapidly aging population. It’s anticipated that over one-third of Chinese citizens will be 65 years old and above by 2050.

Meanwhile in neighboring India, the workforce is just beginning to take off—65% of its population is currently aged 35 years and below. High rates of digital adoption are further compounding economic growth in the country, especially as the world becomes increasingly reliant on telecom and IT services.

Another question this dramatic change begs is: at these rates of population change, can India’s GDP growth also surpass China’s in the next several decades?

The short answer is likely a no, although both countries will still see immense GDP gains during this time. According to PwC, six of the seven largest economies in the world by 2050 will be today’s emerging markets—led by China and India in that order.

While India isn’t likely to be the “next” China in terms of global GDP, it’s certainly giving it a fair fight as a potential rising superpower—and it all stems from the combined might of its growing population.

Between Switch and PlayStation5, gaming console sales are still going strong. Where will the future may take this multi-billion dollar industry? 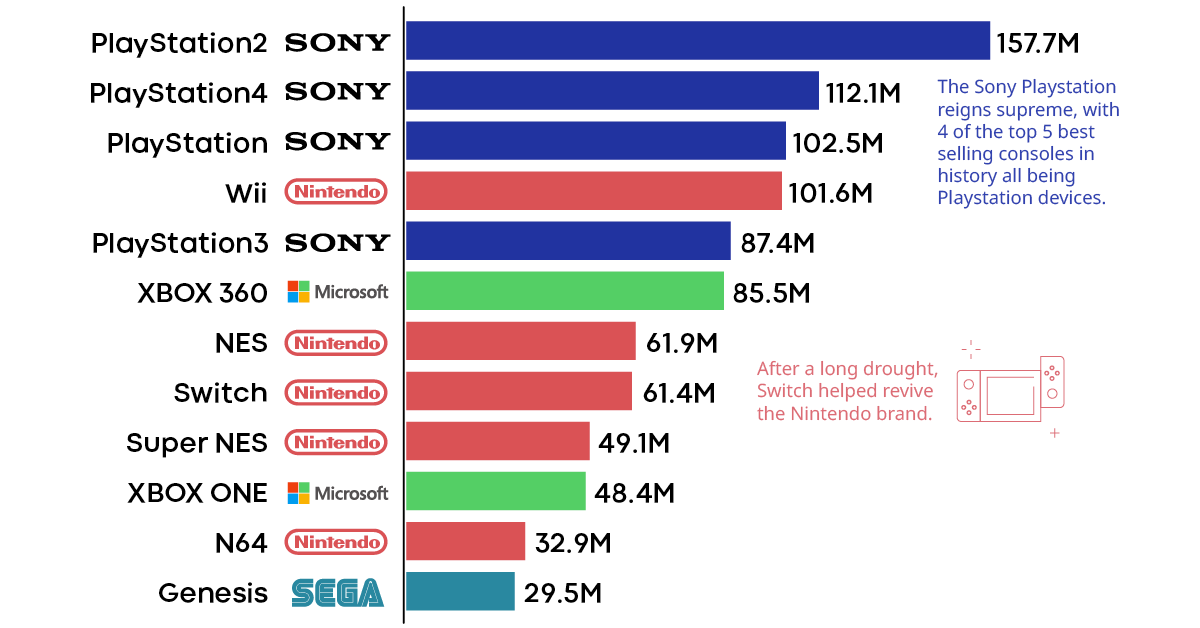 With over 2.7 billion gamers worldwide in 2020, the video game industry is undergoing a renaissance. Billions of dollars are pouring in as transformations occur on multiple fronts, including in mobile, PC, and console gaming markets.

For gamers in the latter category, there comes a monumental time when the cycle flips the page to the next generation of consoles. We are now at that pivotal moment, with the Xbox Series X and Sony PlayStation 5 set to launch on November 10 and 12, 2020, respectively.

How will this generation of console games fare relative to past iterations, and which target demographics will be driving future sales?

There Can Only Be One

Xbox and Nintendo have put up a respectable fight, but the history of gaming console sales point to an extended era of PlayStation dominance.

In fact, PlayStation sits quite comfortably on the top of the podium, with the PS2 alone experiencing greater sales than both the Xbox 360 and Xbox One combined. Over time, Sony has only widened the gap between themselves and the competition. The spread in unit sales between PS3 and Xbox 360 ended 1.6 million in favor of Sony. In the following product cycle, Sony achieved only further dominance, with the difference between PS4 and Xbox One sales now sitting at 63.7 million units.

Looking ahead, unit sale estimates for the PS5 range from 120-170 million and the new console is set to outperform Xbox again—in line with past trends.

Gaming revenues have gone unscathed despite a pandemic, a retraction in economic activity, and the tightening of budgets for households in 2020. This trend could well be a result of video games growing as a form of stay-home entertainment.

On an annualized basis, global video game console revenues are to hit $51 billion in 2020 and reach past $60 billion in the next two years.

It’s clear there is significant buzz around the new consoles, but here’s another perspective that highlights their allure to consumers.

Video games possess an attractive disconnect in that they are an entertainment cash cow for gaming companies, yet gaming products also happen to be a huge cost saver for the consumer relative to other platforms and devices.

The average cost per hour for gaming services is much cheaper than the cost of a book and even more competitive relative to the cost of entertainment giants Netflix and Spotify.

Consoles have transformed to being about much more than just gaming. They now take front and center in people’s homes as a centralized hub for all things entertainment. For both the Xbox One and PS4, half of all gamers use their consoles for non-gaming activity.

Another more notable form of transformation is the identity of the gamer itself. The classic portrayal of teenage boys engaged in Super Mario after school in their parents’ basement has all but dissipated.

In addition to older male users, there’s now a significant emergence in female gamers. In the U.S., women surpass men in both the 36-50 and 51-65 age cohorts. Furthermore, age demographics show a higher usage amongst men in the 36-50 age group, relative to the 10-20 cohort.

There are reasons to expect the next generation of console gaming to be the greatest yet.

PlayStation has momentum on their side, and a slew of new gamers exist today that will continue to help transform the market.

With a more digitally connected world, this new era will see gamers that play and compete with one another from all four corners of the globe. For gamers, this will be a thrilling experience—and for companies, a potentially very lucrative one.