For most people, the “Oracle of Omaha” needs no introduction. With a self-made net worth of $84 billion, some experts consider the 87-year-old to be the greatest investor of all-time.

Despite his incredible achievements and decades in the public eye, the modest Midwesterner is frugal, relatable, and full of humility – and his life story is an endless source of lessons to aspiring business professionals around the world.

Today’s infographic, which is done in partnership with finder.com, is Part 1 of the Warren Buffett Series, a five-part biographical series about the legendary investor.

The young Warren Buffett was clearly a special kid. He ran his first “business” when he was five years old, and he invested in his first stock when he was 11. Buffett even managed to emerge from high school richer than his teachers.

But what lessons can we learn from Buffett’s prolific childhood – and how did his experiences as a young man shape him into the magnate we know today?

From Numbers to Dollar Signs

Even for someone as gifted and focused as Buffett, a serendipitous insight played a crucial role in charting his future course.

During a visit to the New York Stock Exchange when he was 10 years old, the sight of a young man rolling custom, handmade cigars on the floor made an outsized impact on him. In particular, Buffett realized that such a job couldn’t exist without massive amounts of money flowing through the stock market.

This unexpected epiphany planted the seed for stocks in his brain, and Warren’s long fascination with numbers soon shifted towards dollars.

Warren Buffett famously spends 80% of his day reading – and the written word was just as important to his younger self. As a lad, one book that caught Buffett’s eye was One Thousand Ways to Make $1,000 by F.C. Minaker

Specifically, the book showed Buffett how $1,000 could compound over time – and that the earlier you had money working for you, the better.

An important lesson from the book? There’s a massive difference in returns between 60 and 70 year compound interest scenarios. In other words, annualized returns are just one part of the equation – but how long the money compounds is the other crucial part. This is a big part of the reason why Warren Buffett got started early.

Through his various activities, Buffett had $120 saved by age 11. Naturally, he invested it in a stock, co-investing his sister’s money. They each bought three shares of Cities Service Preferred for $38.25 each.

The share price promptly dropped to $27, but Buffett waited it out. When it got to $40, he sold to net a small profit – however, the stock soon after went all the way to $202!

Warren calls this one of the most important moments in his life, and he learned three lessons:

These important lessons would eventually tie in well to his value investing philosophy.

The young Buffett wasn’t afraid to try new things to build up his capital. He collected golf balls, sold peanuts and popcorn, sold gum and Coca-Cola, and even created tipsheets for horse races on a typewriter.

By the end of high school, Buffett had launched multiple businesses, sold thousands of golf balls, read at least 100 books on business, and hawked 600,000 newspapers.

This hard work led to him having a fortune of $5,000 by high school graduation time, the equivalent of $55,000 in today’s currency. He even owned land at this point, after buying 40 acres of Nebraska farmland with his newspaper profits.

After high school, Buffett decided he was a shoe-in for Harvard. He knew it would be stimulating for him intellectually, and that the famed business school would allow him to develop a strong network.

The only problem? He got rejected.

Instead of letting this get to him, he discovered Benjamin Graham’s book The Intelligent Investor and fell in love. It was the methodical investing framework he needed, and he would later call it the “best book about investing ever written”.

Buffett would soon be accepted at Columbia Business School, where Benjamin Graham and David Dodd taught finance. Graham became Buffett’s idol, and his second-biggest influence behind his own father.

Part 2 of the Warren Buffett Series will be released in early January 2018.

Credits: This infographic would not be possible without the great biographies done by Roger Lowenstein (Buffett: The Making of an American Capitalist) and Alice Schroeder (The Snowball), as well as numerous other sources cataloging Buffett’s life online.

The Most Valuable Companies of All-Time

This infographic analyzes over 30 years of stock market performance to identify the best and worst months for gains. 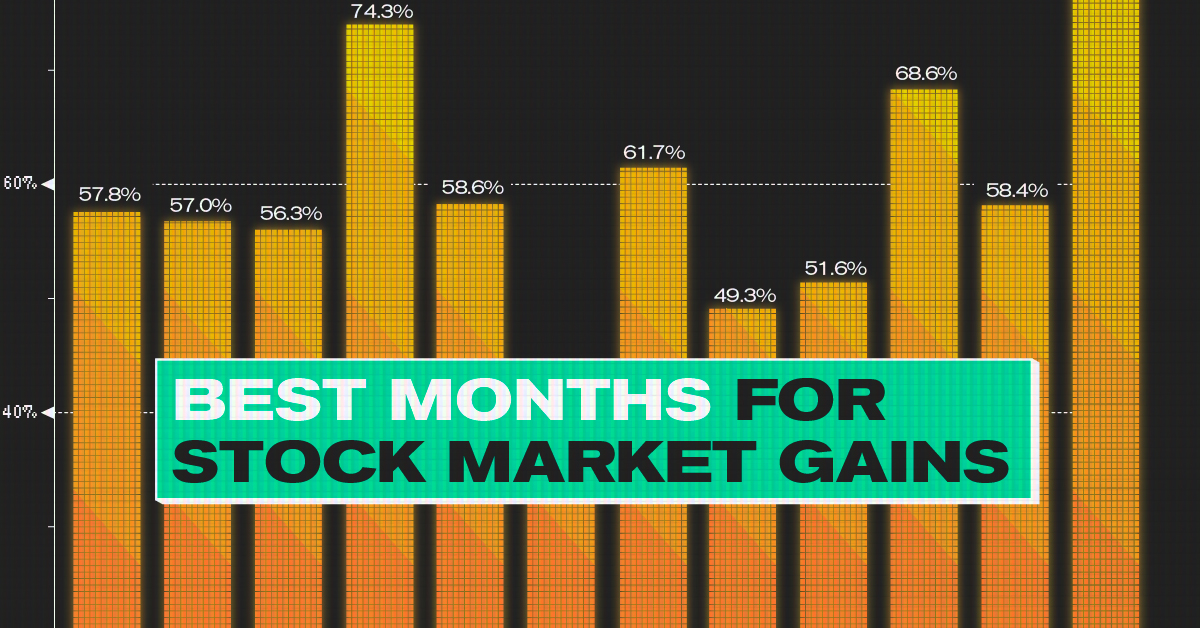 Many investors believe that equity markets perform better during certain times of the year.

Is there any truth to these claims, or is it superstitious nonsense? This infographic uses data gathered by Schroders, a British asset management firm, to investigate.

What the Data Says

This analysis is based on 31 years of performance across four major stock indexes:

The percentages in the following table represent the historical frequency of these indexes rising in a given month, between the years 1987 and 2018. Months are ordered from best to worst, in descending order.

There are some outliers in this dataset that we’ll focus on below.

In terms of frequency of growth, December has historically been the best month to own stocks. This lines up with a phenomenon known as the “Santa Claus Rally”, which suggests that equity markets rally over Christmas.

One theory is that the holiday season has a psychological effect on investors, driving them to buy rather than sell. We can also hypothesize that many institutional investors are on vacation during this time. This could give bullish retail investors more sway over the direction of the market.

The second best month was April, which is commonly regarded as a strong month for the stock market. One theory is that many investors receive their tax refunds in April, which they then use to buy stocks. The resulting influx of cash pushes prices higher.

Speaking of higher prices, we can also look at this trend from the perspective of returns. Focusing on the S&P 500, and looking back to 1928, April has generated an average return of 0.88%. This is well above the all-month average of 0.47%.

The three worst months to own stocks, according to this analysis, are June, August, and September. Is it a coincidence that they’re all in the summer?

One theory for the season’s relative weakness is that institutional traders are on vacation, similar to December. Without the holiday cheer, however, the market is less frothy and the reduced liquidity leads to increased risk.

Whether you believe this or not, the data does show a convincing pattern. It’s for this reason that the phrase “sell in May and go away” has become popularized.

Investors should remember that this data is based on historical results, and should not be used to make forward-looking decisions in the stock market.

Anomalies like the COVID-19 pandemic in 2020 can have a profound impact on the world, and the market as a whole. Stock market performance during these times may deviate greatly from their historical averages seen above.

Regardless, this analysis can still be useful to investors who are trying to understand market movements. For example, if stocks rise in December without any clear catalyst, it could be the famed Santa Claus Rally at work.