Visualized: The World's Population at 8 Billion, by Country

Visualized: The World’s Population at 8 Billion

At some point in late 2022, the eight billionth human being will enter the world, ushering in a new milestone for humanity.

In just 48 years, the world population has doubled in size, jumping from four to eight billion. Of course, humans are not equally spread throughout the planet, and countries take all shapes and sizes. The visualizations in this article aim to build context on how the eight billion people are distributed around the world.

For extended coverage of this moment and what it means to the world, you can get access to our full report and webinar by signing up to VC+, our premium newsletter.

Now, here’s a look at each country’s population as of September 2022:

Below are regional breakdowns of population.

As of 2022, Africa’s total population stands at 1.4 billion people. Many of the countries with the fastest growth rates are located in Africa and by 2050, the population of the continent is expected to jump to 2.5 billion. 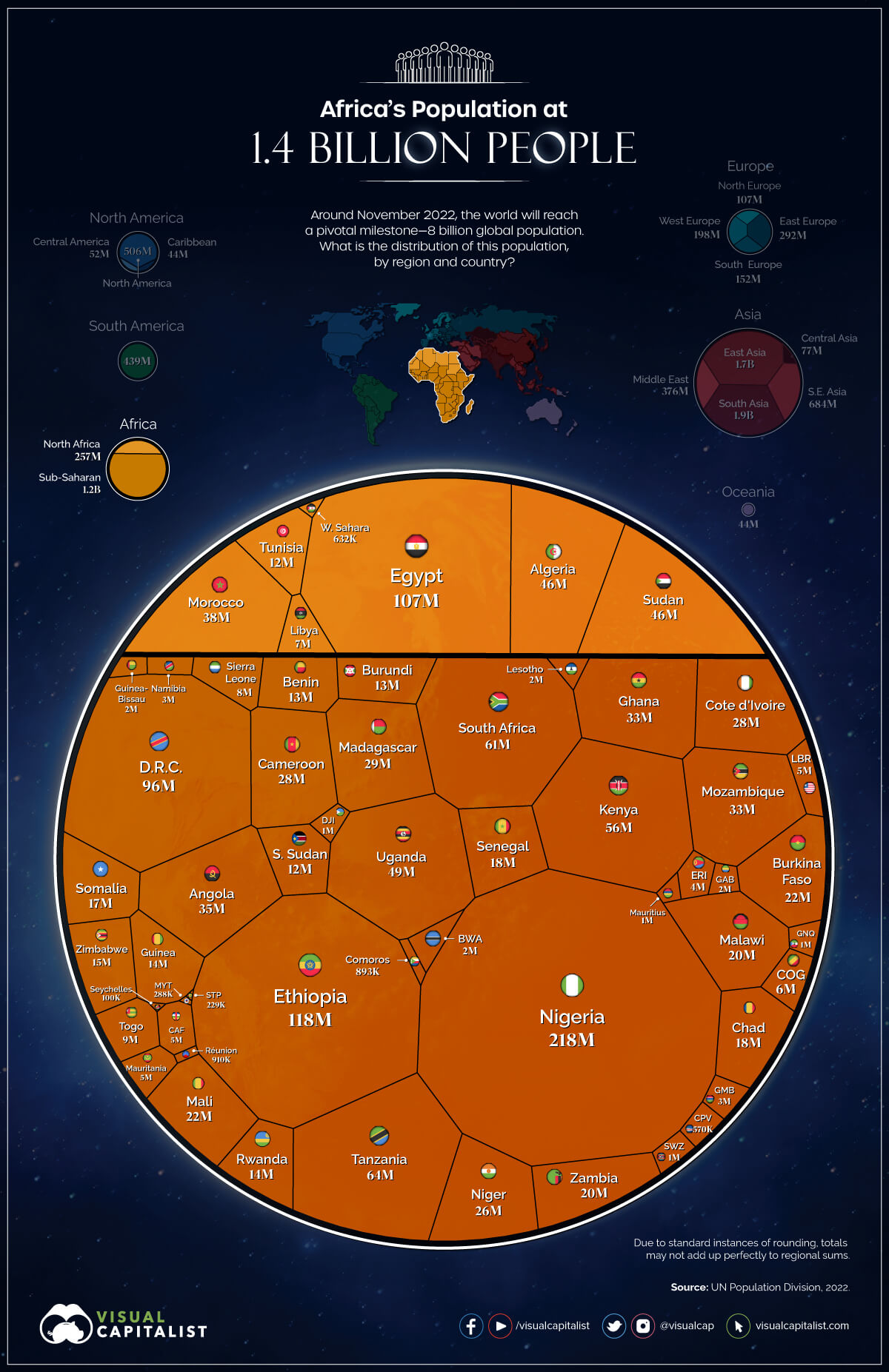 Nigeria is Africa’s most populous country and its largest economy. Based on current growth rates, Nigeria’s largest city, Lagos, could even emerge as the world’s top megacity by the end of the century.

Africa has by far the lowest median age of any of the other continents.

With 4.7 billion people in 2022, Asia is by far the world’s most populous region.

The continent is dominated by the two massive population centers of China and India. In 2023, a big shift will occur, with India surpassing China to become the world’s most populous country. China has held top spot for centuries, but the mismatch between the two countries’ growth rates made it only a matter of time before this milestone arrived. Asia is a region of contrast when it comes to population growth. On the one end are countries like Singapore and Japan, which are actually shrinking. On the other, are Middle Eastern nations like Oman and Qatar, which have robust population growth rates of 4-5%.

Vietnam is on the cusp of becoming the 15th country to surpass the 100 million population mark.

Europe’s population in 2022 is 750 million people—more than twice the size of the United States.

A century ago, Europe’s population was close to 30% of the world total. Today, that figure stands at less than 10%. This is, in part, due to population growth throughout other regions of the world.

More importantly though, Europe’s population is contracting in a number of places—Eastern Europe in particular. Many of the countries with the slowest growth rates are located in the Balkans and former Soviet Bloc countries. 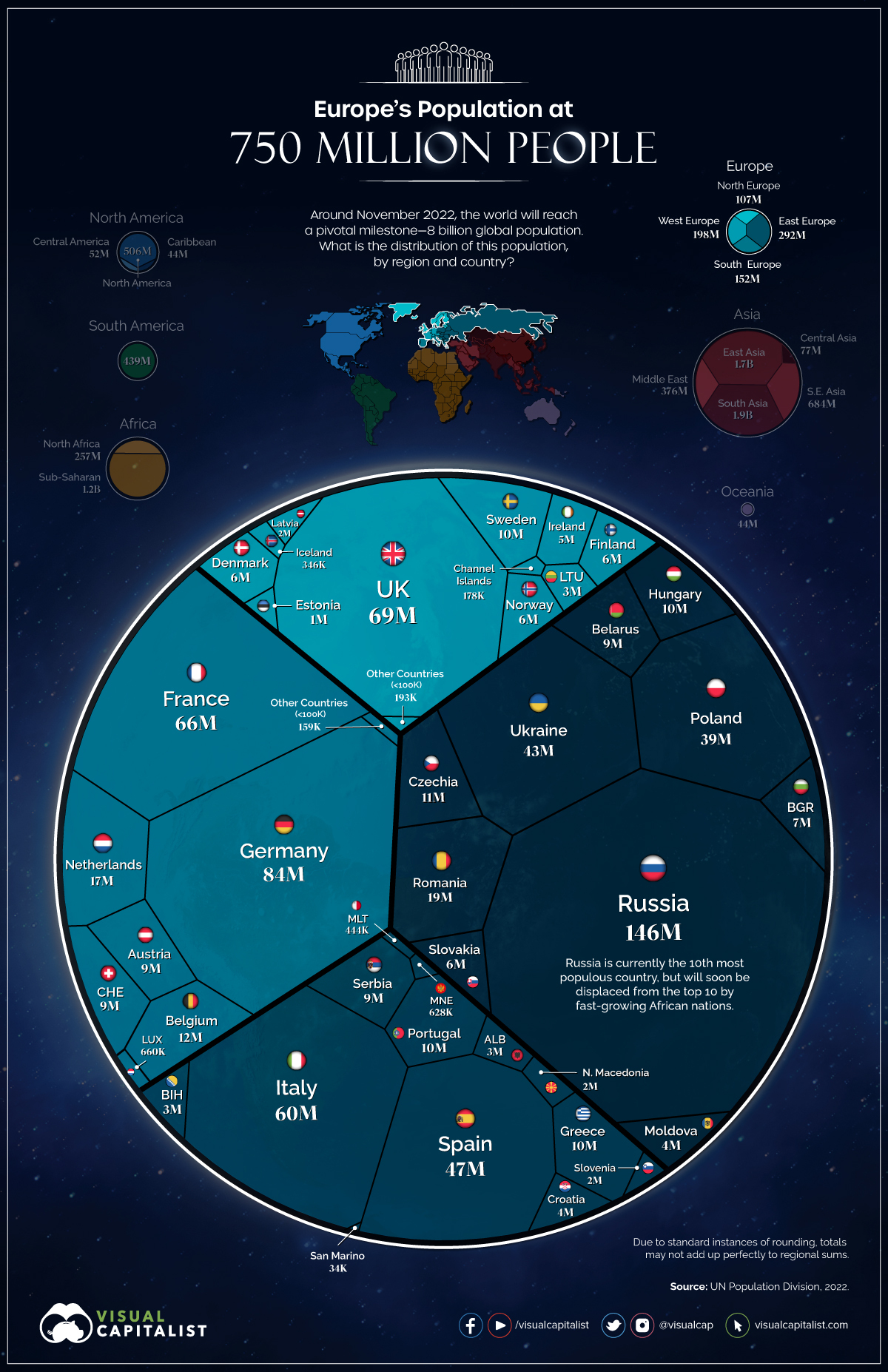 Russia remains Europe’s largest country by population. Although the country’s landmass extends all the way across Asia, three-quarters of Russia’s people live on the European side of the country.

Germany is the second largest country in Europe, followed by the UK, France, and Italy.

Ukraine is the seventh largest population center in Europe, but it remains to be seen how the current conflict with Russia impacts the country’s long-term population prospects.

North America’s population is 602 million people as of 2022.

The continent is dominated by the United States, which makes up more than half of the total population. America’s population is still growing modestly (by global standards), but perhaps more interesting are the internal migration patterns that are occurring. States like Texas and Florida are seeing an influx from other states. 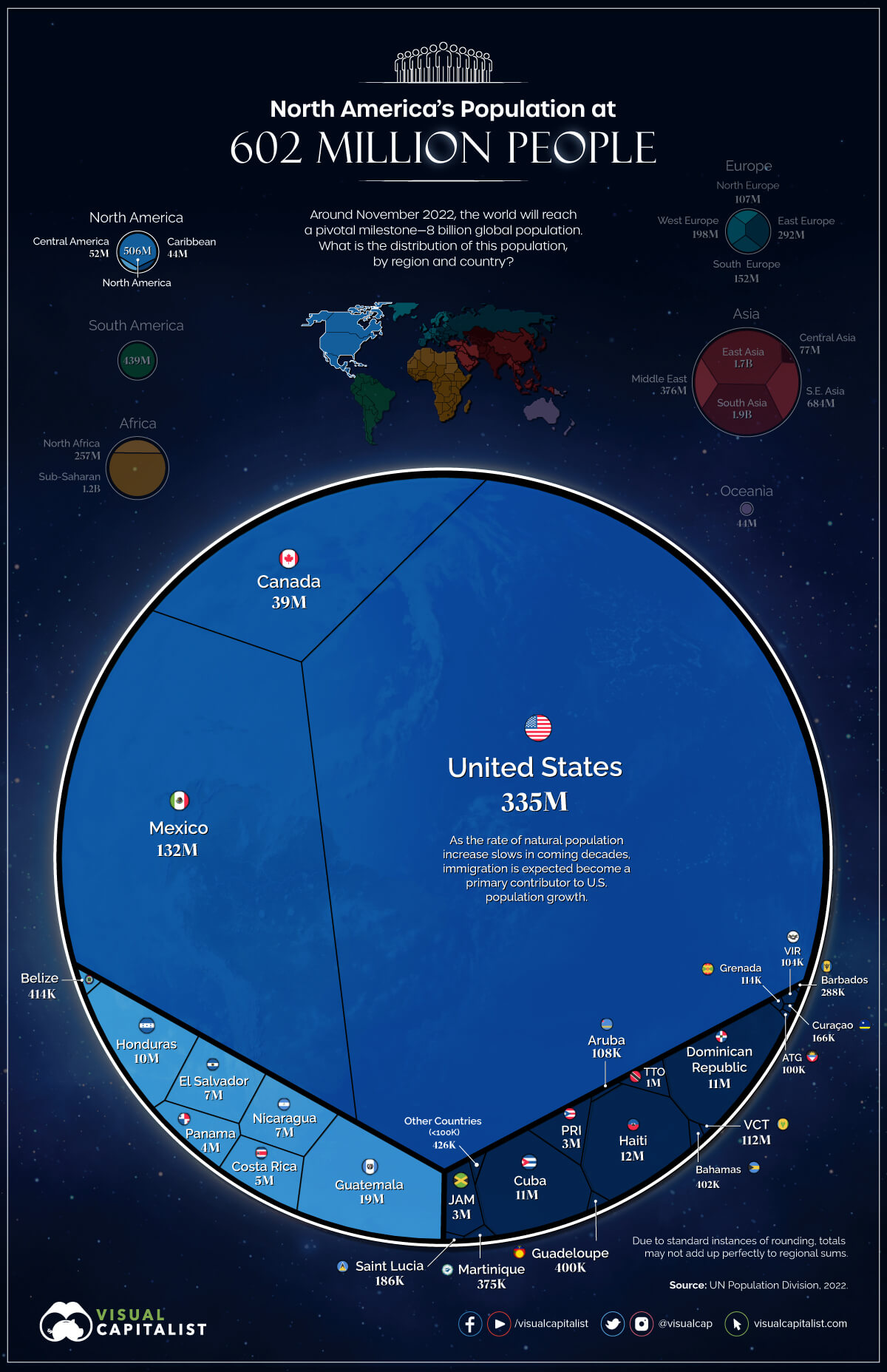 Canada has one of the highest population growth rates of major developed economies thanks to international migration.

Mexico is currently the 10th most populous country, but will eventually be bumped from the top 10 list by fast-growing African nations.

The population of South America in 2022 is 439 million. Brazil makes up nearly half of that total. 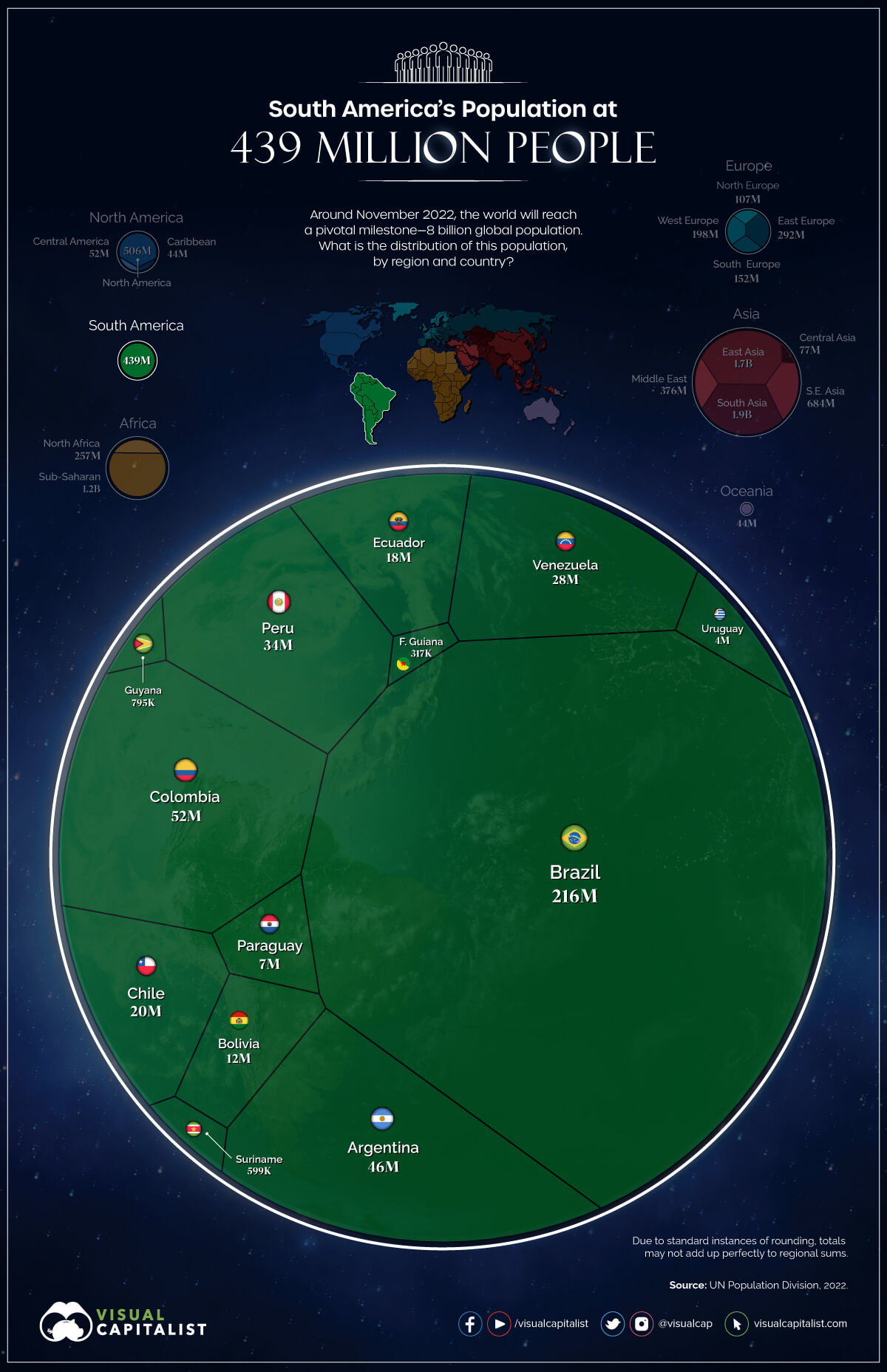 Sometime this decade, Colombia’s capital, Bogotá, will become the region’s fifth megacity (which is defined as having a population of 10 million or more). São Paulo, Rio de Janeiro, Buenos Aires, and Lima are South America’s current megacities.

Australia, New Zealand, and Papua New Guinea make up the lion’s share of the population of this region. 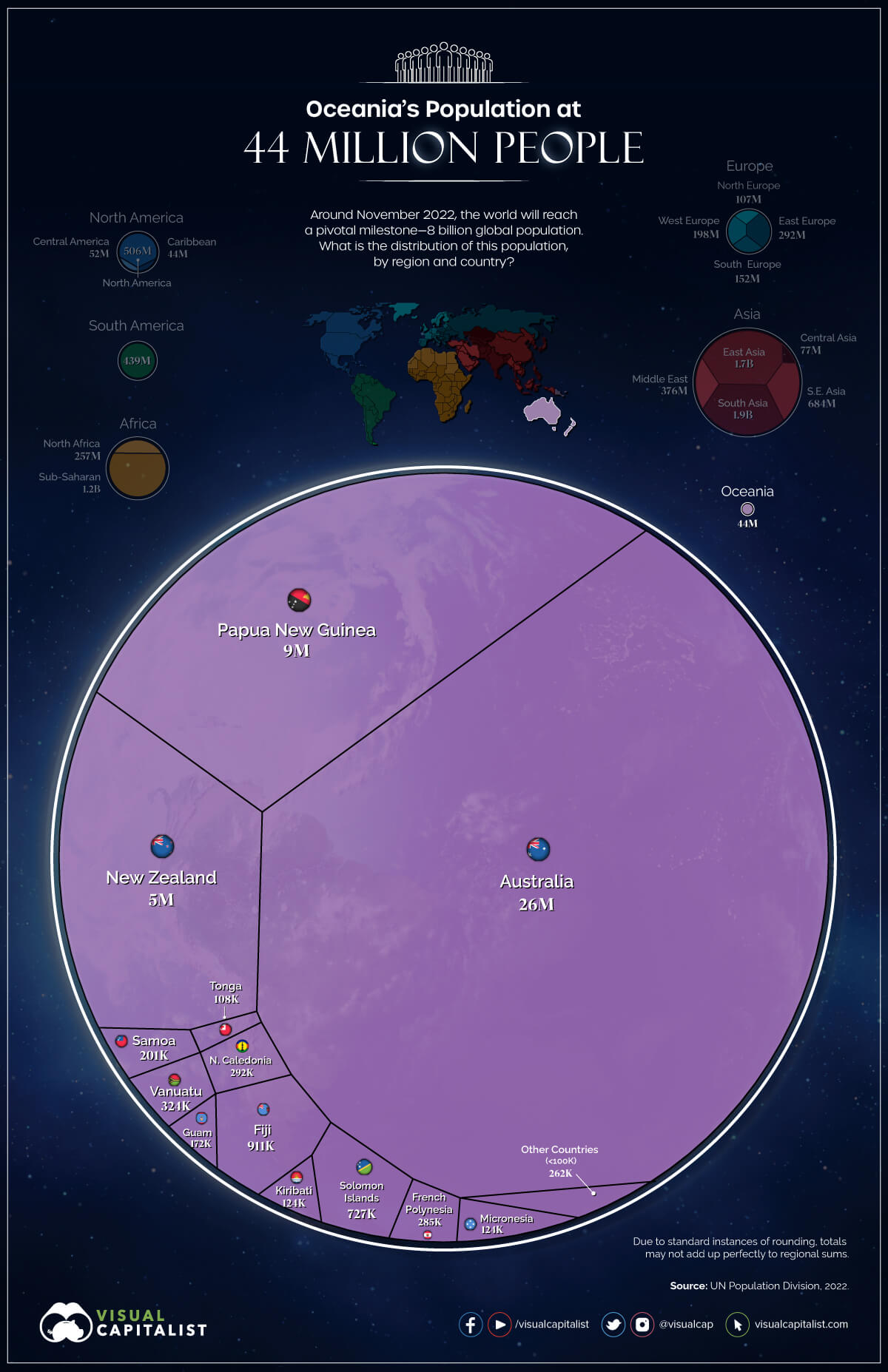 Interestingly, many of the smallest countries by population can also be found in this region.

When Will Earth’s Population Hit 9 Billion?

The next global population milestone—nine billion—will likely be hit sometime in the 2030s.

In fact, Earth’s population is expected to continue growing until it hits a peak at some point in the 2080s—possibly over the 10 billion mark.

Context: The UN has estimated that November 15th, 2022, will be the date that the world population officially hits 8 billion.

Related Topics:chinaindiapopulationfeaturedglobal population
Up Next