Mapped: The Territorial Evolution of the U.S.

The sun (almost) never sets on the American Empire.

The United States is the third largest country in the world, with a vast territory extending beyond the borders of the contiguous states. To be exact, the United States is made up of 50 states, nine uninhabited territories, five self-governing territories, one incorporated territory, and one federal district (Washington D.C.). The boundaries of the country haven’t changed much in recent years, but the lines on the map have shifted numerous times in history, through both negotiation and bloodshed.

Today’s above animation, by u/Golbwiki, is the perfect visual aid to understand how the United States evolved from the Thirteen Colonies to its current form.

Here are five of the largest expansion events in U.S. history. Napoléon Bonaparte didn’t just have a huge impact on Europe, he also altered the course of history in the New World as well. The French General was waging an expensive war in Europe, and began to view the Louisiana Territory as a burden – as well as a potential source of income. In 1803, he offered up all 828,000 square miles for the famously low price of $15 million.

This massive land purchase comprises nearly 25% of the current territory of the United States, stretching from New Orleans all the way up to Montana and North Dakota.

Spanish explorers first established a presence in Florida as far back as 1565, but 250 years later, Spain had done little to cement its foothold in the region. The Spanish realized they were in poor position to defend Florida should the U.S. decide to seize it.

In 1819, Secretary of State John Quincy Adams negotiated the signing of the Florida Purchase Treaty, which officially transferred Florida to the United States after years of negotiations. There was no official cost of purchase, but the U.S. government agreed to assume approximately $5 million of claims by U.S. citizens against Spain.

The newly created Republic of Texas, which broke away from Mexico in the Texas Revolution, was peacefully annexed by the United States in 1845. In one fell swoop, the U.S. acquired 389,000 square miles of former Mexican territory.

Shortly after the Texas Annexation, tensions between Mexico and the U.S. flared up anew.

Congress declared war on Mexico over a boundary dispute in 1846, and after a relatively brief armed conflict – known as the Mexican–American War – the two countries signed the Treaty of Guadalupe-Hidalgo.

The treaty recognized Texas as a U.S. state, and the United States took control of a huge parcel of land that includes the present-day states of California, Nevada, and Utah, as well as portions of Arizona, Colorado, New Mexico, and Wyoming. Mexico received $15 million in the arrangement, but saw the size of their territory halved.

In the aftermath of the Crimean War, Alexander II began exploring the possibility of selling Alaska. Similar to Spain’s foothold in Florida earlier in the century, the Russian Emperor recognized the possibility of American incursions into the territory, which they were not in a good position to defend against.

We must foresee that [the U.S.,] will take the afore-mentioned colonies from us and we shall not be able to regain them.

The examples above are only a brief overview of the complex evolution of shifting territorial claims in America.

For those who want to take a deep dive into the shifting borders of America, here is an extremely thorough animation, also by the same author:

Of course, colonial expansion in North America didn’t occur in a vacuum. For an Native American perspective on this topic, check out this animated map.

The 20 Biggest Bankruptcies in U.S. History

Visualizing U.S. Energy Use in One Giant Chart

We examine an ambitious timeline that details the power of various civilizations going all the way back to 2,000 B.C.

Imagine creating a timeline of your country’s whole history stretching back to its inception.

It would be no small task, and simply weighing the relative importance of so many great people, technological achievements, and pivotal events would be a tiny miracle in itself.

While that seems like a challenge, imagine going a few steps further. Instead of a timeline for just one country, what about creating a graphical timeline showing the history of the entire world over a 4,000 year time period, all while having no access to computers or the internet?

View a high resolution version of this graphic

Histomap, published by Rand McNally in 1931, is an ambitious attempt at fitting a mountain of historical information onto a five-foot-long poster. The poster cost $1 at the time, which would equal approximately $18 when accounting for inflation.

Although the distribution of power is not quantitatively defined on the x-axis, it does provide a rare example of looking at historic civilizations in relative terms. While the Roman Empire takes up a lot of real estate during its Golden Age, for example, we still get a decent look at what was happening in other parts of the world during that period.

The visualization is also effective at showing the ascent and decline of various competing states, nations, and empires. Did Sparks see world history as a zero-sum exercise; a collection of nations battling one another for control over scarce territory and resources?

Crowning a world leader at certain points in history is relatively easy, but divvying up influence or power to everyone across 4,000 years requires some creativity, and likely some guesswork, as well. Some would argue that the lack of hard data makes it impossible to draw these types of conclusions (though there have been other more quantitative approaches.)

Another obvious criticism is that the measures of influence are skewed in favor of Western powers. China’s “seam”, for example, is suspiciously thin throughout the length of the timeline. Certainly, the creator’s biases and blind spots become more apparent in the information-abundant 21st century.

Lastly, Histomap refers to various cultural and racial groups using terms that may seem rather dated to today’s viewers.

The Legacy of Histomap

John Spark’s creation is an admirable attempt at making history more approachable and entertaining. Today, we have seemingly limitless access to information, but in the 1930s an all encompassing timeline of history would have been incredibly useful and groundbreaking. Indeed, the map’s publisher characterized the piece as a useful tool for examining the correlation between different empires during points in history. Critiques aside, work like this paved the way for the production of modern data visualizations and charts that help people better understand the world around them today.

Without a map who would attempt to study geography? –John B. Sparks

These maps show the most (and least) costly countries for starting a business by relative costs. 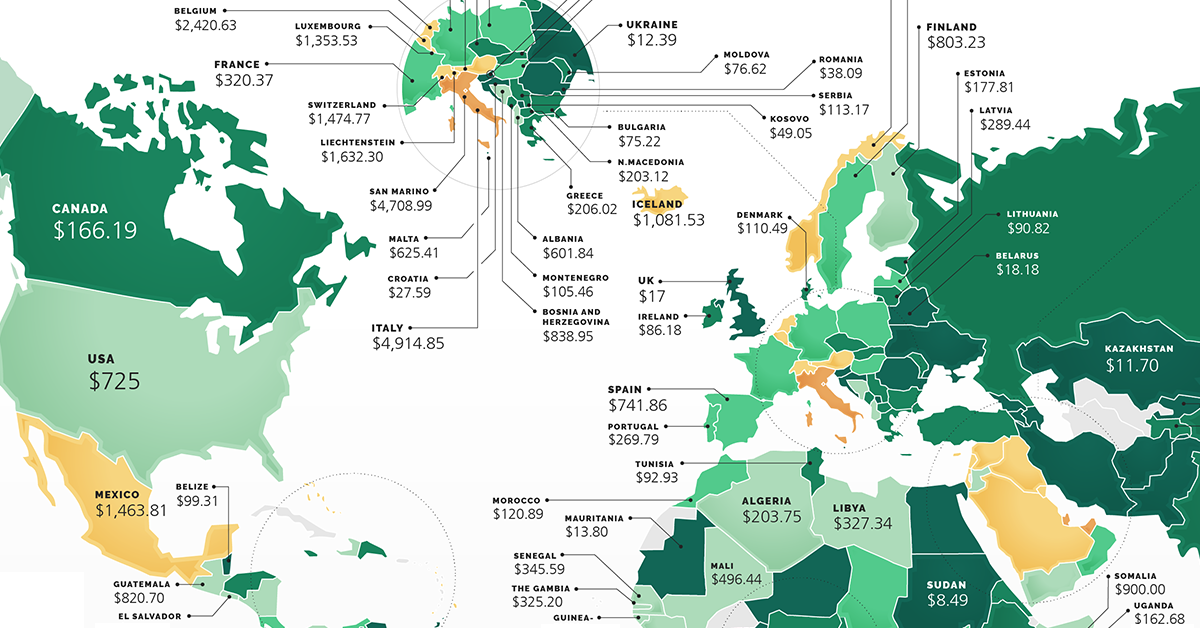 Which Country is the Cheapest for Starting A Business?

Starting a new business isn’t as simple as coming up with an idea.

In addition to the time investment needed to formulate and create a business, there’s often a hefty capital requirement. A new business usually requires paying different fees for licensing, permits, and approvals, and many governments also have minimum on-hand capital requirements.

And costs are relative. Though it might be more costly to start a business in some countries on paper, affordability also takes into account relative income.

These graphics from BusinessFinancing.co.uk use data from the World Bank’s Doing Business 2020 report to examine the startup cost for a small-to-medium-size LLC in the largest business cities across 190 countries.

The Cost of Starting a Business in Different Countries

From a pure cost perspective, the affordability of starting a business is extremely dependent on where you are located.

Some countries make the cost of business extremely low to encourage more economic activity. Others have high or nearly inaccessible fees to protect existing businesses, or to simply cash in on the entrepreneurial spirit.

At a glance, the cheapest regions for starting a business include Central Asia and Africa.

But the cheapest countries on the dollar for a new startup are Venezuela, Rwanda, and Slovenia. While the former does have fees that only total $0.21, both Rwanda and Slovenia have no fees for new businesses, though Slovenia does have a capital requirement of €7,500.

Expensive countries for new businesses are also spread across the world. There are some in Europe, including Italy at $4,876 and Austria at $2,475, as well as the Americas, including Suriname at $3,030 and Ecuador at $1,630.

Which Country is the Most Affordable for Starting a Business?

Just as costs vary by country, so too does relative affordability.

Not including countries with missing data, the most affordable countries for starting a business include the UK, Denmark, and Ireland in Europe, South Korea in East Asia, and New Zealand in Oceania. Startup costs in each range from just 1%-2% of monthly income.

The picture is similar in the Americas, where Chile and Canada have the lowest relative fees at 2% and 5% of monthly income respectively. Even the U.S.—which has a decently high cost of $725 for starting a business—is relatively affordable at 16% of monthly income.

Some of the least affordable countries lie in the Middle-East and Central America. Haiti and Suriname have startup costs that are 1,403% and 1,114% of monthly income, while Yemen has affordability rates of 1,070%.

Where is the best place to start a business? It can depend on the barrier to entry. But the biggest barrier takes time and ingenuity: finding the right idea at the right time.