Because of this demand, U.S. employers are willing to pay for the right talent—on average, tech workers in the U.S. earn about 61% more than the average salary. But some tech workers make more than others, depending on where they live.

This graphic by business.org uses data from the Bureau of Labor Statistics (BLS) to highlight the average annual tech salaries in each state, compared to the average salary of other occupations. We’ll also touch on the top-paying metro areas, and what type of tech jobs offer the highest compensation across the country.

Perhaps unsurprisingly, Washington and California have the highest average salaries, largely because of the high job density in those areas.

However, when it comes to the difference in tech salary versus average salary, Alabama takes the top spot—on average, tech jobs pay 85% more than other occupations in that state.

Why are tech workers so generously compensated in Alabama? It could be because the area’s talent pool is not keeping up with demand.

In 2021, Huntsville, Alabama is expected to see 25,000 new jobs in aerospace, logistics, defense, and other tech-related industries. But these jobs could be difficult to fill given the area’s low unemployment rate.

On the other end of the spectrum, the District of Columbia has the smallest discrepancy between tech and other salaries. But at $95,330, the area has the highest average yearly salary for other occupations in the country—and tech workers still make 20% more.

For instance, when it comes to pay differences in tech, two of the top 10 metro areas are located in Washington state, while three are in California. The graphic below shows the metros with the highest difference between the area’s average salary and the average salary of tech jobs. The highest pay difference between tech jobs vs the average salary is in San Jose, where tech workers make 507% more on average. This figure is almost certainly skewed because of the area’s high concentration of tech millionaires and top tier programmers.

Of course, location isn’t the only factor that plays into salary—the type of job is important, too. Here’s a look at U.S. tech salaries, organized by job type: In this analysis, which looked at jobs in computer science as well as mathematics, actuaries are the highest paid professionals on average.

The Future of Tech is Bright

America’s information technology sector, worth about $1.6 trillion, is expected to grow to $5 trillion by the end of 2021. And as this fast-growing industry continues to boom, jobs in this sector are likely to remain in high supply.

In short, tech is expected to keep growing. And salaries will likely follow suit.

Over the last two decades, trade between China and Latin America has grown significantly, which has threatened U.S. dominance in the region. Over the past 20 years, China’s economic presence around the world has grown significantly, including in Latin America.

Now, China is one of Latin America’s largest trade partners, which is threatening U.S. dominance in the region. This graphic by Latinometrics uses IMF data to show trade flows between China and Latin America since the 1980s.

Here’s a look at total trade flows between Latin America and the two countries since 1980. Latinometrics calculated trade flows as total exports plus imports.

Things stayed relatively stagnant until the early 2000s. Then suddenly, at the start of the new millennium, trade between China and Latin America started to ramp up.

This uptick was driven largely by Chinese demand for things like copper, oil, and other raw materials that the country needed to help fuel its industrial revolution.

Momentum has continued for two decades, and now China is the top trading partner in nine different Latin American countries. In fact, in 2021, imports and exports between China and Latin America (excluding Mexico) reached $247 billion—that’s $73 billion more than trade flows with the United States that same year.

Trade between China and Latin America is expected to keep growing, at least for the time being. By 2035, trade flows between the two regions are projected to more than double, according to World Economic Forum.

China’s trade takeover of Latin America speaks to a wider trend that’s happening on a global scale—over the last two decades, China has surpassed the U.S. as the world’s largest trading partner.

While China is likely to remain the world’s leading trade partner for the foreseeable future, growth is likely to slow in the short-term, given ongoing supply chain issues and geopolitical tensions that have disrupted the global economy.

Visualized: The Value of U.S. Imports of Goods by State

U.S. goods imports were worth $2.8T in 2021. From east coast to west, this visualization breaks down imports on a state-by-state basis 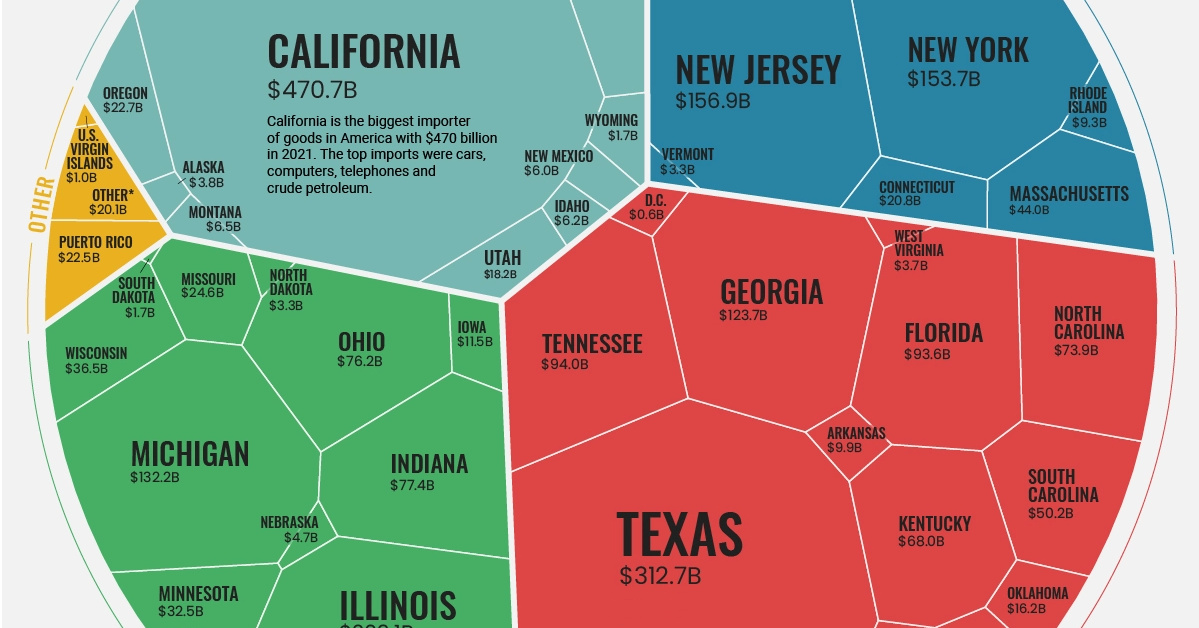 Visualized: The Value of U.S. Imports of Goods by State 2021

For nearly 50 years and counting, U.S. imports have exceeded exports—and 2021 was no exception. Imports of goods to the U.S. equaled $2.8 trillion, relative to $1.8 trillion for exports, putting the 2021 goods trade deficit at its highest level on record.

Using the most recent data on global trade from the U.S. Census Bureau and the U.S. Bureau of Economic Analysis, we take a closer look at the value of American goods imports and visualize them state by state.

Overall, the goods trade deficit—the amount by which a country’s imports exceed its exports—was more than $1 trillion in 2021, increasing over 18% from the previous year. Goods imports specifically increased by nearly $502 billion, a 21% increase year-over-year.

California, the U.S.’s top importer, saw over $470 billion worth of goods come in last year. Some of its big ticket items fell in line with the state’s tech sector’s needs, like automatic data processing machines and accessories and parts for said machinery. California’s own deficit is quite high—the state’s goods exports were only valued at approximately $175 billion. The state’s busy ports are a key entry point for goods arriving from Asia, which helps explain this deficit.

Where are Imports Coming From?

Here’s a look at the country’s top trade partners for goods imports and the value of their imports in 2022 as of April.

Over half of the top import partners for the United States are located in Asia. China is by far America’s top source of goods, making up 17% of the country’s imports.

Meanwhile, Canada and Mexico each account for roughly 14% of America’s goods imports due to the close proximity, strong economic ties, and trade agreements.

Imports of goods increased to a value of $2.8 trillion in 2021, the highest on record. According to the U.S. Census Bureau, industrial supplies and materials and crude oil saw some of the most notable increases.