The Top Struggles of Remote Workers

Unplugging from work can be challenging at the best of times.

But when your living room doubles as your office, it can be even harder–at least that’s the case for 22% of remote workers.

Thanks to the global pandemic, millions of workers have been sent home to work at a safe distance. While many remote workers enjoy the flexibility that comes with remote work, it doesn’t come without its drawbacks.

Here’s a ranking of the top struggles that remote workers face, according to a recent report by Buffer and AngelList:

The report also found that only 15% of employers paid the cost of home internet, and 21% covered the cost of a phone plan in a work-from-home situation. However, with this type of arrangement still being relatively new for most, these perks could evolve over time.

Despite the various challenges involved, 98% of remote workers would like to continue working remotely, at least some of the time, for the rest of their careers.

In short—while remote work poses its own set of struggles, the benefits outweigh the cons.

»For a more in-depth look at the topic of remote work, visit: How People and Companies Feel About Working Remotely.

Source: The State of Remote Work Report, from Buffer and AngelList
Details: Survey results from 3,500 remote workers from across the globe.
Notes: This report was published in February of 2020 and the data was collected in November of 2019.

How Amazon Makes Its Money

Which Countries Believe WWIII is Coming?

In every single country surveyed, the majority of respondents believed a global conflict would break out between superpowers in coming years Which Countries Believe WWIII is Coming?

After a pandemic, rampant inflation, a faltering global economy, and geopolitical flare-ups, it’s no surprise that people have a souring outlook on the future.

Even so, the results of this recent survey by Ipsos are eyebrow raising. In all 33 countries where polling took place, the majority of respondents said they believe a world war on the scale of WWI and WWII would break out between global superpowers in coming years.

Here’s a look at how various countries felt about the possibility of an impending global conflict:

Japan was the least sure of an impending global conflict—an opinion that is almost certainly shaped by the country’s historical experience in WWII.

Australia was the most certain of an impending global conflict. The country has a unique relationship with Asian and Western countries, so geopolitical tensions between superpowers may resonate more in the Land Down Under.

The Power of Fear

Given the negative slant of stories covered by mass media and the types of stories that are most widely shared on social media platforms, it’s easy to understand how people have developed such a gloomy view of the future. But “bad vibes” aside, how could this perception translate into real world action?

For one, public opinion helps shape political priorities. A narrative of impending conflict could have an impact on geopolitical policy and relationships.

Another possibility is an increase in military spending across the board. 64% of people across 30 countries somewhat or strongly agree that their home government should beef up military spending “given the dangers in the world.” Aside from Ukraine, India (84%) and Poland (81%) ranked the highest in support of increasing military spending.

One other noteworthy finding is that 85% of people in the countries surveyed believe that the world needs new international agreements and institutions to deal with the challenges faced by the world today, and that world powers are unlikely to respect agreements made through international bodies. These findings are significant since war becomes more likely as cooperation between countries breaks down.

Data note: These are the results of a 33-market survey conducted by Ipsos on its Global Advisor online platform. Ipsos interviewed a total of 32,507 adults aged 18-74 in the United States, Canada, Malaysia, South Africa, and Turkey, 20-74 in Thailand, 21-74 in Indonesia, and 16-74 in the remaining markets between Friday, September 23 and Friday, October 7, 2022.

Deforestation over the last 30 years has led to a 177.5 million hectare reduction in world’s forests. See why these trends need to reverse swiftly in order to effectively manage climate change. (Sponsored Content) 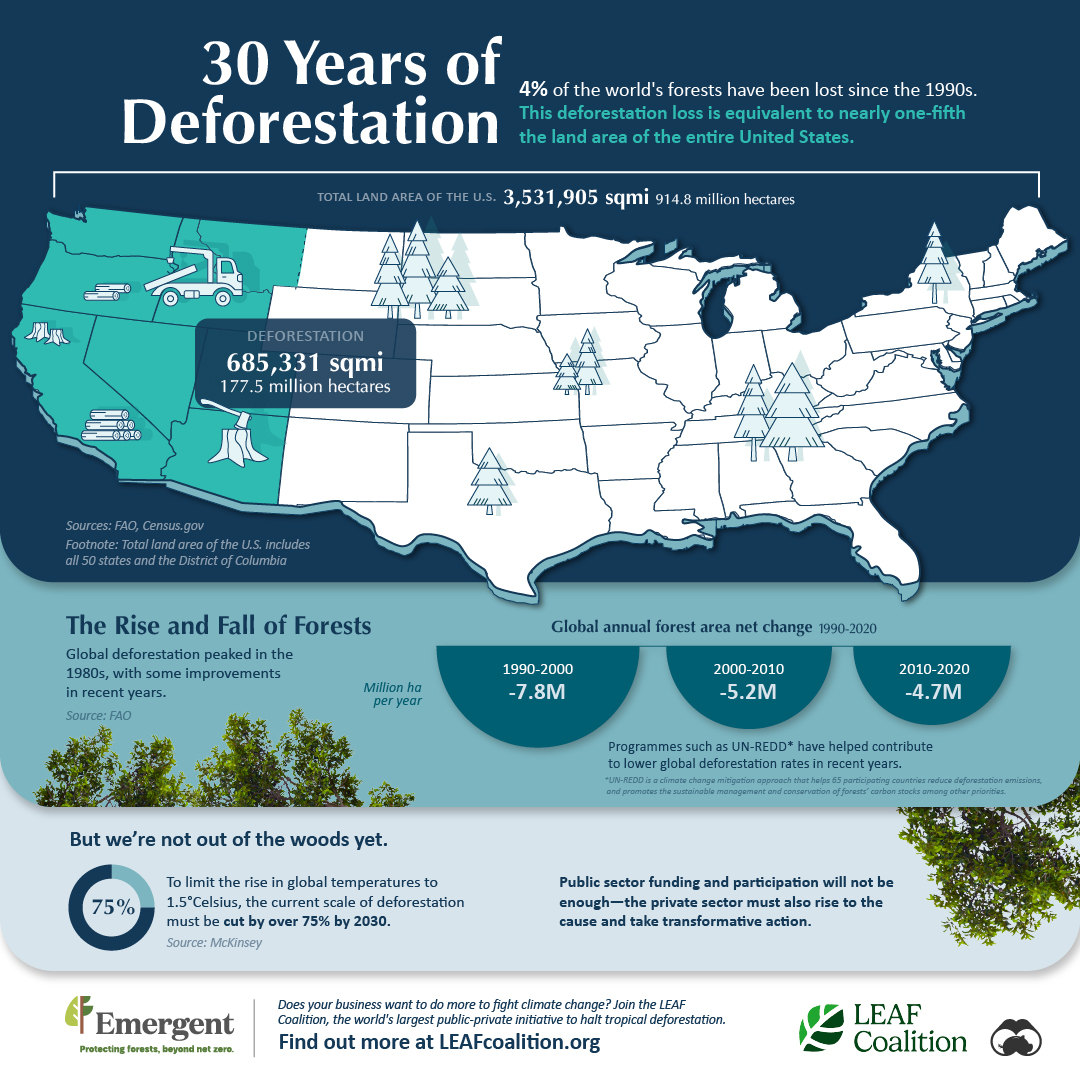 Estimates say deforestation practices need to be thwarted by 75% by 2030, in order to effectively manage rising global average temperatures. But when looking at deforestation data over the last 30 years, it’s clear we’ve gone in the opposite direction.

This sponsored graphic from The LEAF Coalition looks at the total land lost to deforestation since the 1990s and compares it to the total land in the U.S. as a point of reference.

The Rise and Fall of Forests

Approximately 4% of the world’s forests have been lost since the 1990s. This is equivalent to 177.5 million hectares or 685,000 square miles, and greater than the total land area of 179 countries in the world. In addition, this covers one-fifth of the land in America. Here’s how the average global annual net change in forest area looks on a decade-by-decade basis.

A silver lining here is that in the most recent decade that’s passed we’ve seen a reduction in the amount of deforestation. Compared to the late 1990s, the decade between 2010 and 2020 has seen yearly deforestation reduce by 3.1 million hectares from 7.8 million to 4.7 million.

However, there’s still plenty of work that needs to be done and the devastating impact deforestation has on the environment cannot be understated.

Not Out of the Woods Yet

By some estimates, 30% of the globe’s carbon emissions are absorbed by forests each year. In order to keep our global average temperatures at 1.5°C, action needs to ramp up to diminish deforestation. One solution is to open up funding and participation to the private sector and bridge their efforts with that of the public sector.