Albert Einstein was one of the most brilliant and influential mathematical physicists in human history. Even 62 years after his passing, he is still widely regarded as the prototypical genius.

Today’s timeline from KickResume is an inventive and entertaining look at Einstein’s life and achievements.

Albert Einstein was born on March 14, 1879, in the German city of Ulm. From an early age, Einstein was fascinated by mathematics, science, and music.

While he would eventually go on to reveal the inner workings of the universe, Einstein struggled as a student, failed exams, and had dust-ups with authority figures.

In 1903, he married a former classmate, Mileva Marić, though his parents disapproved. Recently discovered letters indicate that Marić – who was also a physicist – may have contributed significantly to his groundbreaking work. The couple had a daughter in 1902 (who was given up for adoption), and later had two sons.

In 1905, Albert Einstein was working as a clerk in the patent office in Bern, Switzerland. The 26-year-old had only recently submitted his doctoral thesis to the University of Zurich, but was hard at work writing four papers in a single year that would eventually turn the world of science on its head. That is why 1905 is often referred to as an annus mirabilis (or “miraculous year” in Latin).

To summarize: Albert Einstein laid the foundation of quantum physics, introduced special relativity, and established the scientific basis of nuclear energy in his spare time.

From Science Star to Supernova

By 1919, while working as a professor of theoretical physics at the University of Berlin, Einstein theorized that an impending solar eclipse would provide a rare opportunity to observe gravity’s effect on light. When reports came back that his predictions were proven correct, it not only sent a shock-wave through the scientific community, but the whole world.

– Headline in the London Times

Years after Einstein’s miracle year, his immense accomplishments started to become common knowledge. The physicist, now an overnight celebrity, spent the next few years traveling, doing speaking engagements, and collecting awards. He was also a founder of the Hebrew University in Jerusalem in 1921, and won a Nobel Prize that same year.

Albert Einstein was an outspoken pacifist and Jew, so as Hitler rose to power in Germany, he made the decision to emigrate to the United States. He accepting a position at the Institute for Advanced Study in Princeton, New Jersey. The physicist would never set foot in the country of his birth again.

Einstein and the Atomic Era

A month before World War II, Einstein and his colleague, Leo Szilárd, wrote numerous letters to President Franklin D. Roosevelt sounding the alarm that Germany was developing “extremely powerful bombs of a new type”. The President took the letters seriously and soon after, the Advisory Committee on Uranium (a precursor to the Manhattan Project) was created.

Einstein carried the guilt of his role in sparking the development of atomic weapons, and he would continue to speak out against their use throughout the 1940s and onward.

The Fight For Equality

Seeing the parallels between the treatment of Jews in Germany and African Americans in his adopted country, Einstein became a member of the National Association for the Advancement of Colored People (NAACP). He campaigned for civil rights and in a famous speech at Lincoln University, he labeled racism “a disease of white people,” and added, “I do not intend to be quiet about it.”

In 1952, Einstein declined an offer from Israel’s premier, David Ben-Gurion, to become president of Israel.

At the age of 76, Einstein suffered an abdominal aortic aneurysm, but opted against surgery upon arriving at the hospital. “I want to go when I want,” he stated at the time. “It is tasteless to prolong life artificially. I have done my share, it is time to go. I will do it elegantly.” Albert Einstein died in his sleep on April 18, 1955.

Though the man himself is gone, the legacy and unique world-view of the eccentric physicist continues to influence and inspire humanity to this day.

Which risks are top of mind in 2021? We visualize the World Economic Forum’s risk assessment for top global risks by impact and livelihood. Risk is all around us. After the events of 2020, it’s not surprising that the level and variety of risks we face have become more pronounced than ever.

Every year, the World Economic Forum analyzes the top risks in the world in its Global Risks Report. Risks were identified based on 800+ responses of surveyed leaders across various levels of expertise, organizations, and regional distribution.

The World’s Top Risks by Likelihood and Impact

According to WEF’s risk assessment methodology, all the global risks in 2021 fall into the following broad categories:

It goes without saying that infectious diseases have now become one of the top societal risks on both metrics of likelihood and impact.

That said, environmental risks continue to dominate the leaderboard, accounting for five of the top 10 risks by impact, especially when it comes to climate action failure.

Several countries are off-track in meeting emissions goals set by the Paris Climate Agreement in 2015, while the pandemic has also delayed progress in the shift towards a carbon-neutral economy. Meanwhile, biodiversity loss is occurring at unprecedented rates.

As for other risks, the prospect of weapons of mass destruction ranks in third place for potential impact. In the global arms race, a single misstep would trigger severe consequences on civil and political stability.

While many of the risks included in the Global Risks Report 2021 are familiar to those who have read the editions of years past, there are a flurry of new entries to the list this year.

Here are some of the most interesting ones in the risk assessment, sorted by category:

COVID-19 has resulted in a myriad of knock-on societal risks, from youth disillusionment and mental health deterioration to livelihood crises. The first two risks in particular go hand-in-hand, as “pandemials” (youth aged 15-24) are staring down a turbulent future. This generation is more likely to report high distress from disrupted educational and economic prospects.

At the same time, as countries prepare for widespread immunization against COVID-19, another related societal risk is the backlash against science. The WEF identifies vaccines and immunization as subjects susceptible to disinformation and denial of scientific evidence.

As monetary stimulus was kicked into high gear to prop up markets and support many closed businesses and quarantined families, the economic outlook seems more fragile than ever. Debt-to-GDP ratios continue to rise across advanced economies—if GDP growth stagnates for too long, a potential debt crisis could see many businesses and major nations default on their debt.

With greater stress accumulating on a range of major industries such as travel and hospitality, the economy risks a build-up of “zombie” firms that drag down overall productivity. Despite this, market valuations and asset prices continue to rise, with equity markets rewarding investors betting on a swift recovery so far.

Last but not least, COVID-19 has raised the alert on various technological risks. Despite the accelerated shift towards remote work and digitalization of entire industries, the reality is that digital inequality leaves those with lower digital literacy behind—worsening existing inequalities.

Big Tech is also bloating even further, growing its digital power concentration. The market share some companies hold in their respective sectors, such as Amazon in online retail, threatens to erode the agency of other players.

Assessing the Top 10 Risks On the Horizon

Back in mid-2020, the WEF attempted to quantify the biggest risks over an 18-month period, with a prolonged economic recession emerging on top.

In this report’s risk assessment, global risks are further classified by how soon their resulting threats are expected to occur. Weapons of mass destruction remain the top risk, though on a much longer scale of up to 10 years in the future.

Through this perspective, COVID-19 (and its variants) remains high in the next two years as the world scrambles to return to normal.

It’s also clear that more economic risks are taking center stage, from an asset bubble burst to price instability that could have a profound effect over the next five years.

There are 510 million km² of area on the Earth, but less than 30% of this is land. Here’s the share countries make up of the Earth’s surface. 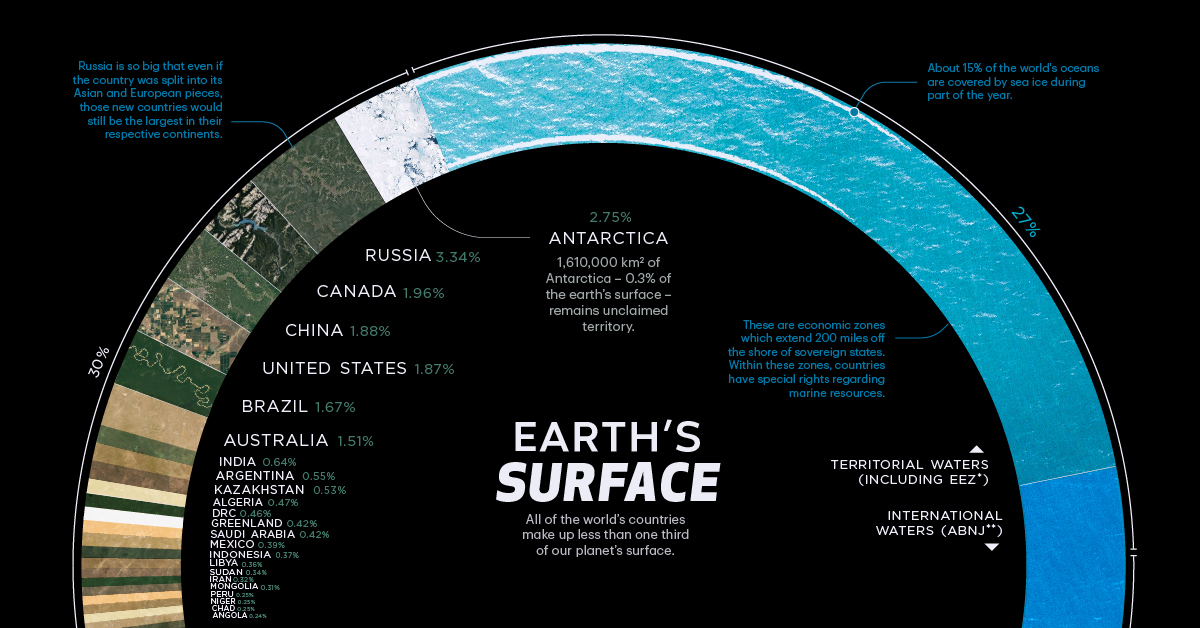