A 160 Year View of the Gold-Oil Ratio

2020 has ushered in a new era of prices for two historically significant assets—gold and oil.

The market has driven the pair in polar opposite directions breaking historical patterns. This year, gold brushed above $2,000 an ounce, while oil futures even went temporarily negative in the spring. The gold-oil ratio tells us how many barrels of West Texas Intermediate (WTI) are needed to buy an ounce of gold, serving as a price-based indicator of the relative value of these two important assets.

Here’s a look at the price of gold and oil over the last 6 months:

Traditional investing mantra tells us gold acts as an alternative investment, a haven if you will, that appreciates in price during tumultuous economic and financial times.

Its limited quantity and physical storage properties serve as a hedge to much of modern finance that is increasingly digital.

The COVID-19 pandemic, a subsequent slowdown in economic activity, and the debt-driven stimulus packages by governments globally are all factors in the recent gold rally.

At the other end are the oil markets, which face both long and short-term headwinds. Long-term demand for oil has dwindled gradually as societies buff up their alternative and green energy initiatives.

Shrinking activity during the pandemic was the short-term shock. Combined, the outcomes include oil futures going negative in spring, Chevron reporting a net income loss of $8.3 billion in the second quarter, and Exxon’s dumping from The Dow.

As markets adapt to the volatile nature of 2020, only time will tell what the future holds for the gold-oil ratio. How much is the average American worth at different ages? This chart reveals the average net worth by age in the U.S. 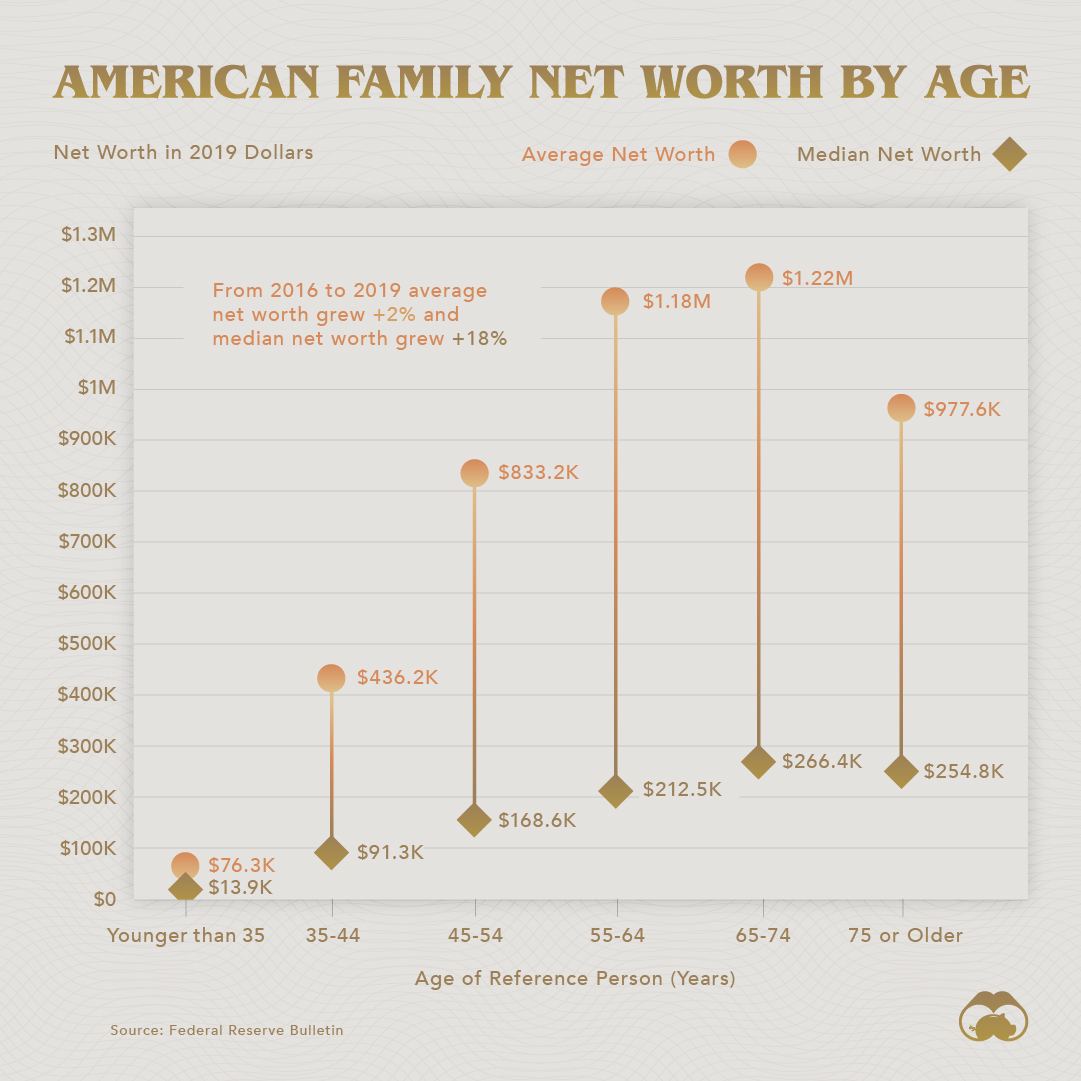 Calculating the net worth of individuals often seems like the kind of math reserved only for the richest people in the world like Elon Musk or Jack Ma. But as the proverbial pie gets bigger, the net worth of the average American household gets bigger as well.

This chart uses data from the U.S. Federal Reserve Bulletin to reveal median and average household net worth across different age categories in 2019.

Average vs. Median Net Worth

A person’s net worth is a sum of their assets and liabilities. Here’s a closer look at net worth by age in the U.S.

The age group with the highest net worth is those aged 65-74, sitting at around $1.22 million. Coming in at a close second, are 55-64 year olds, at $1.18 million. However, these are the numbers using the average, while median net worth is quite different.

Median net worth at 65-74, for example, is $266,000, a difference of over $950,000 compared to the average. This reveals that there are likely high net worth individuals skewing the average towards over a million dollars in the same age category.

Both average and median net worth appear to increase throughout one’s life, trailing off slightly around the 75+ age range.

Trends in Net Worth

With the economic impacts of COVID-19, it’s possible that median net worth growth could taper off across nearly every age category, as people lose jobs, income, and assets such as houses.

Average net worth, on the other hand, may not drop as significantly, as a handful of American billionaires have actually increased their net worth during the pandemic.

Overall, wealth has been generally increasing in America with a consistent rise in average and median net worth occurring over the three years leading up to the pandemic. And while this steady increase has likely been slightly derailed, the general trends in asset ownership and income increases over time, bode well for Americans.