The Energy Information Administration (EIA) recently released data on the history of America’s energy supply, sorted by the share of each energy source. We’ve taken that data to create the chart associated with today’s post.

Related Topic: Mapping Every Power Plant in the United States

The early settlers to North America relied on organic materials on the surface of land for the vast majority of their energy needs. Wood, brush, and other biomass fuels were burned to warm homes, and eventually to power steam engines. Small amounts of coal were found in riverbeds and other such outcrops, but only local homes in the vicinity of these deposits were able to take advantage of it for household warmth.

During the Industrial Revolution, it was the invention of the first coal-powered, commercially practical locomotives that turned the tide. Although wood would still be used in the majority of locomotives until 1870, the transition to fossil fuels had begun.

Coke, a product of heating certain types of coal, replaced wood charcoal as the fuel for iron blast furnaces in 1875. Thomas Edison built the first practical coal-fired electric generating station in 1882, which supplied electricity to some residents in New York City. It was just after this time in the 1910s that the United States would be the largest coal producer in the world with 750,000 miners and blasting 550 million tons of coal a year.

The invention of the internal combustion engine and the development of new electrical technologies, including those developed by people like Thomas Edison and Nikola Tesla, were the first steps towards today’s modern power landscape. Fuels such as petroleum and natural gas became very useful, and the first mass-scale hydroelectric stations were built such as Hoover Dam, which opened in 1936.

The discovery and advancement of nuclear technology led to the first nuclear submarine in 1954, and the first commercial nuclear power plant in the United States in Pennsylvania in 1957. In a relatively short period of time, nuclear would have a profound effect on energy supply, and it today 99 nuclear reactors account for 20% of all electricity generated in the United States.

Related Topic: What it Takes to Power New York (Slideshow)

In more recent decades, scientists found that the current energy mix is not ideal from an environmental perspective. Advancements in renewable energy solutions such as solar, wind, and geothermal were made, helping set up a potential energy revolution. Battery technology, a key challenge for many years, has began to catch up to allow us to store larger amounts of energy when the sun isn’t shining or the wind isn’t blowing. Companies like Tesla are spending billions of dollars on battery megafactories that will have a great impact on our energy use.

Today, the United States gets the majority of its energy from fossil fuels, though that percentage is slowly decreasing. While oil is still the primary fuel of choice for transportation, it now only generates 1% of the country’s electricity through power plants. Natural gas has also taken on a bigger role over time, because it is perceived as being cleaner than oil and coal.

Today, in 2015, wind and solar power have generated 5% and 1% of total electricity respectively. Hydro generates 7%.

It’s Time to Pile Back Into Gold Stocks [Charts]

Mapping Every Power Plant in the United States

This visualization breaks down U.S. oil imports by country for 2021, showing the split by OPEC and non-OPEC nations. 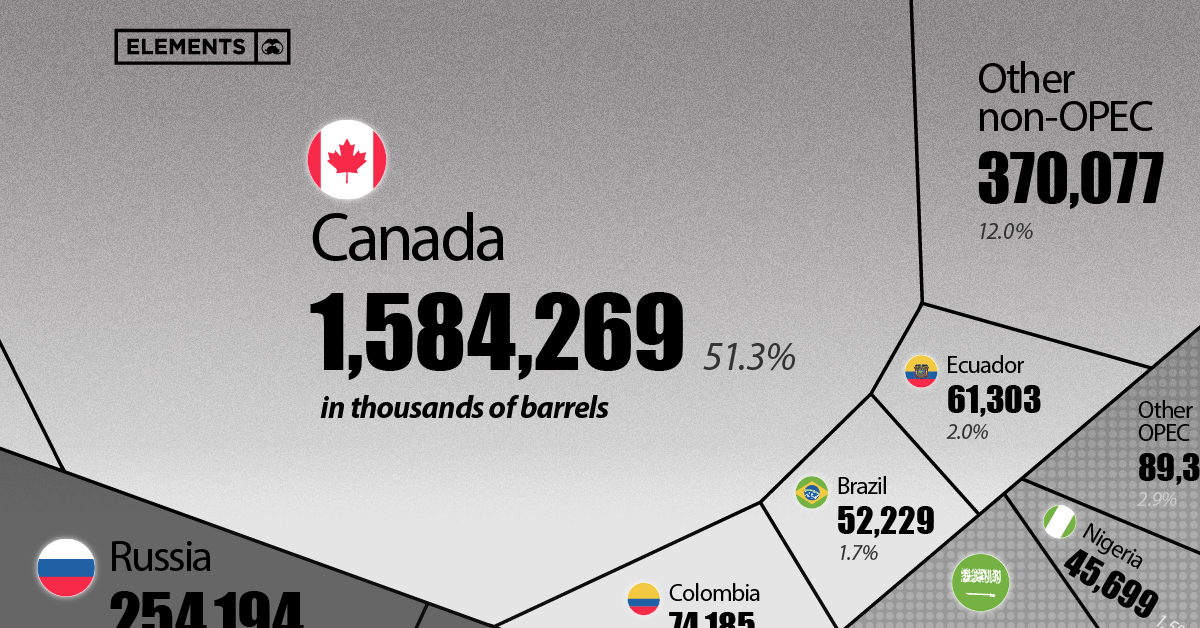 Energy independence is top of mind for many nations as Russia’s invasion of Ukraine has prompted sanctions and bans against Russian coal and crude oil imports.

Despite being the world’s largest oil producer, in 2021 the U.S. still imported more than 3 billion barrels of crude oil and petroleum products, equal to 43% of the country’s consumption.

This visualization uses data from the Energy Information Administration (EIA) to compare U.S. crude oil and refined product imports with domestic crude oil production, and breaks down which countries the U.S. imported its oil from in 2021.

The U.S. imports more than 8 million barrels of petroleum products a day from other nations, making it the world’s second-largest importer of crude oil behind China.

America’s northern neighbor, Canada, is the largest source of petroleum imports at 1.58 billion barrels in 2021. These made up more than 51% of U.S. petroleum imports, and when counting only crude oil imports, Canada’s share rises to 62%.

Russia was the third-largest exporter of crude oil and petroleum products to the U.S. in 2021, with their 254 million barrels accounting for almost 8% of total imports.

U.S. Crude Oil and Petroleum Imports from OPEC and OPEC+

Only about 11% of U.S. crude oil and petroleum product imports come from OPEC nations, with another 16.3% coming from OPEC+ members.

While imports from OPEC and OPEC+ members make up more than a quarter of America’s total petroleum imports, this share is fairly small when considering OPEC members currently control nearly 80% of the world’s oil reserves.

Which Countries are Part of OPEC and OPEC-Plus?

The Organization of Petroleum Exporting Countries (OPEC) is a group of 13 petroleum producing nations that formed in 1960 to provide steady prices and supply distribution of crude oil and petroleum products.

In 2016, OPEC-plus was formed with additional oil-exporting nations in order to better control global oil supply and markets in response to a deluge of U.S. shale supply hitting the markets at that time.

Although OPEC and OPEC+ members supply a significant part of U.S. crude oil and petroleum imports, America has avoided overdependence on the group by instead building strong ties with neighboring exporters Canada and Mexico.

While the U.S. has been a net exporter of crude oil and petroleum products the past two years, exporting 3.15 billion barrels while importing 3.09 billion barrels in 2021, crude oil-only trade tells a different story.

Maximizing imports from neighboring countries makes sense on multiple fronts for all parties due to lower transportation costs and risks, and it’s no surprise Canada and Mexico are providing large shares of just crude oil as well. With such a large collection of oil refineries across the border, it’s ultimately more cost-efficient for Canada and Mexico to tap into U.S. oil refining rather than refining domestically.

While Russia only makes up 8% of American petroleum product imports, their 254 million barrels will need to be replaced as both countries ceased trading soon after Russia’s invasion of Ukraine.

In an effort to curb rising oil and gasoline prices, in March President Joe Biden announced the release of up to 180 million barrels from the U.S. Strategic Petroleum Reserves. Other IEA nations are also releasing emergency oil reserves in an attempt to curb rising prices at the pump and volatility in the oil market.

While the U.S. and the rest of the world are still managing the short-term solutions to this oil supply gap, the long-term solution is complex and has various moving parts. From ramping up domestic oil production to replacing oil demand with other cleaner energy solutions, oil trade and imports will remain a vital part of America’s energy supply.