44 Closest Stars and How They Compare to our Sun

Humans have been fascinated by the stars in the night sky since the dawn of time.

We’ve been decoding the mysteries of celestial bodies for many centuries, but it is only in the last 200 years or so that we’ve been able to glean more detailed information on the lights that dot the night sky. Friedrich Bessel’s method of stellar parallax was a breakthrough in accurately measuring the positions of stars, and opened new doors in the effort to map our universe. Today, high-powered telescopes offer even more granular data on our cosmic neighborhood.

The infographic above, from Alan’s Factory Outlet, categorizes the 44 closest stars to Earth, examining the size, luminosity, constellations, systems, and potential planets of each star.

Our closest neighboring stars are all part of the same solar system: Alpha Centauri. This triple star system – consisting of Proxima Centauri, Alpha Centauri A, and Alpha Centauri B – attracts a lot of interest because it hosts planets, including one that may be similar to Earth.

The planet, Proxima Centauri b, is a lot closer to its star than Earth is to the Sun. However, because Proxima Centauri is a smaller and cooler red dwarf type star, the planet’s orbit is within the habitable zone. It’s thought that Proxima Centauri b receives approximately the same amount of solar energy as Earth does from our Sun.

Here’s a full list of the 44 of the closest stars to Earth:

Even though we see many of these stars in the night sky, humans aren’t likely to see them in person any time soon. To put these vast distances into perspective, if the Voyager spacecraft were to travel to Proxima Centauri, it would take over 73,000 years to finally arrive.

The Brightest Stars in the Sky

The closest stars aren’t necessarily the ones most visible to us here on Earth. Here are the top 10 stars in terms of visual brightness from Earth:

Excluding our Sun, the brightest star visible from Earth is Sirius, or the Dog Star. Sirius, which is about 25 times more luminous than the sun, visually punctuates the constellation Canis Major.

Filling in the Gaps

The next step in learning more about our surroundings in the cosmos will be seeing which of the stars listed above have planets orbiting them. So far, the 44 stars in the infographic have over 40 planets scattered among them, though new discoveries are made all the time.

With each new mission and discovery, we learn a little bit more about our pocket of the universe.

Mapped: Each Region’s Median Age Since 1950

Visualizing the True Size of Land Masses from Largest to Smallest 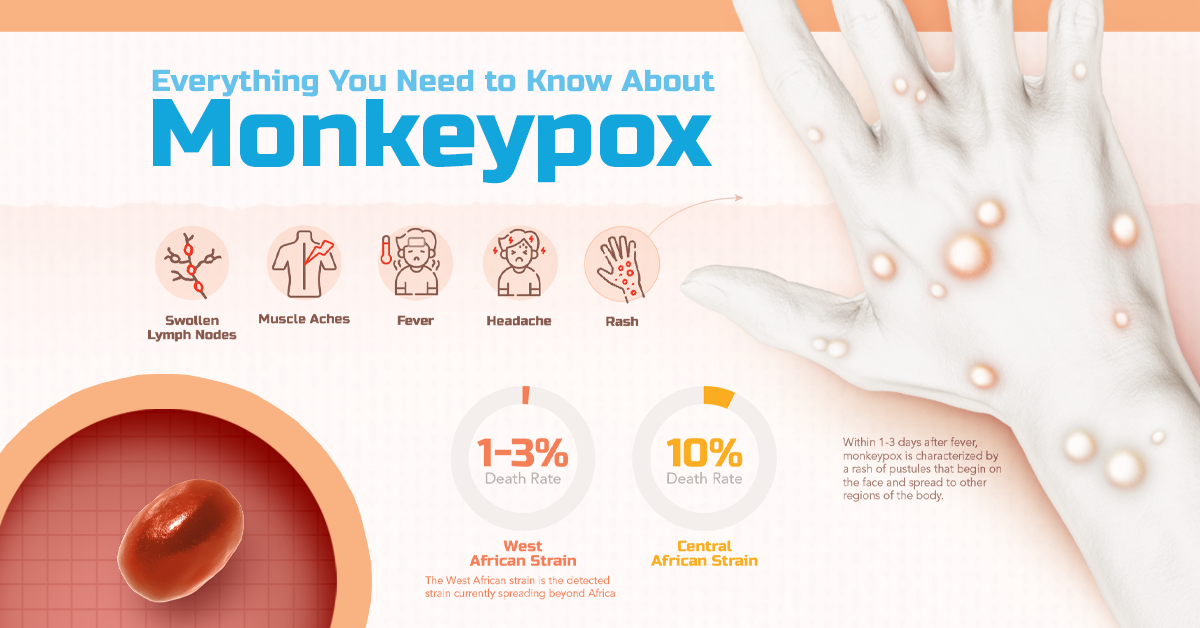 Just how powerful are nuclear bombs? Here’s a look at the top 10 largest nuclear explosions. 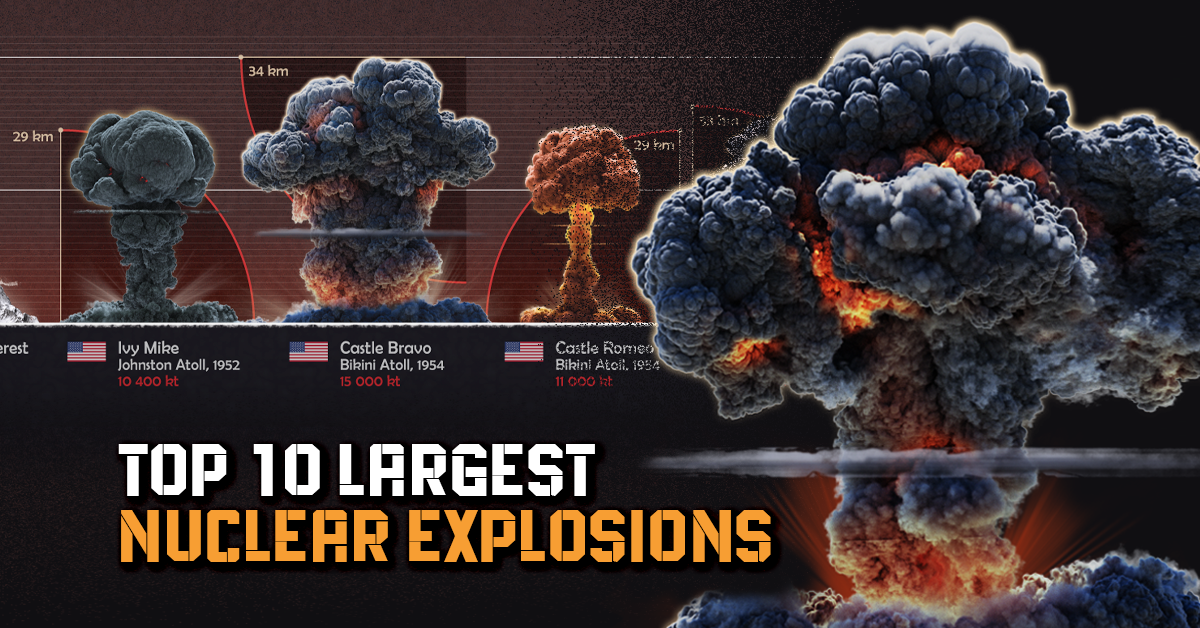 Just how powerful are nuclear explosions?

The U.S.’ Trinity test in 1945, the first-ever nuclear detonation, released around 19 kilotons of explosive energy. The explosion instantly vaporized the tower it stood on and turned the surrounding sand into green glass, before sending a powerful heatwave across the desert.

As the Cold War escalated in the years after WWII, the U.S. and the Soviet Union tested bombs that were at least 500 times greater in explosive power. This infographic visually compares the 10 largest nuclear explosions in history.

The Anatomy of a Nuclear Explosion

After exploding, nuclear bombs create giant fireballs that generate a blinding flash and a searing heatwave. The fireball engulfs the surrounding air, getting larger as it rises like a hot air balloon.

As the fireball and heated air rise, they are flattened by cooler, denser air high up in the atmosphere, creating the mushroom “cap” structure. At the base of the cloud, the fireball causes physical destruction by sending a shockwave moving outwards at thousands of miles an hour. 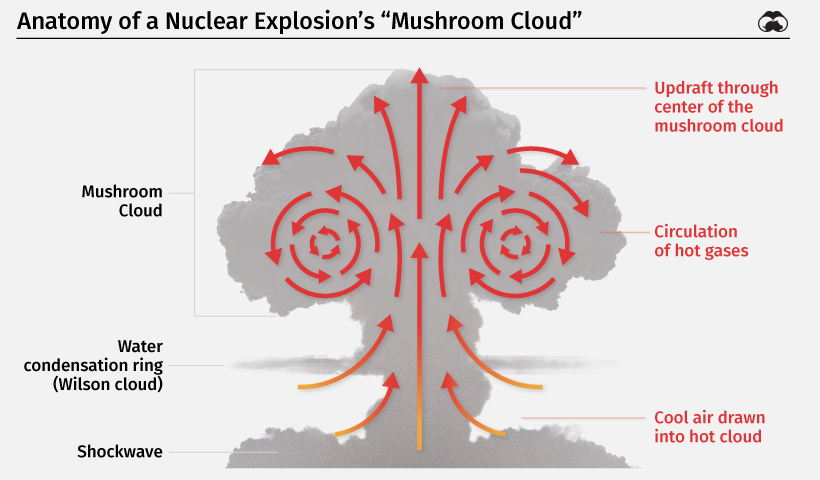 A strong updraft of air and dirt particles through the center of the cloud forms the “stem” of the mushroom cloud. In most atomic explosions, changing atmospheric pressure and water condensation create rings that surround the cloud, also known as Wilson clouds.

Over time, the mushroom cloud dissipates. However, it leaves behind radioactive fallout in the form of nuclear particles, debris, dust, and ash, causing lasting damage to the local environment. Because the particles are lightweight, global wind patterns often distribute them far beyond the place of detonation.

With this context in mind, here’s a look at the 10 largest nuclear explosions.

In 1952, the U.S. detonated the Mike device—the first-ever hydrogen bomb—as part of Operation Ivy. Hydrogen bombs rely on nuclear fusion to amplify their explosions, producing much more explosive energy than atomic bombs that use nuclear fission.

Castle Romeo was part of the Operation Castle series of U.S. nuclear tests taking place on the Marshall Islands. Shockingly, the U.S. was running out of islands to conduct tests, making Romeo the first-ever test conducted on a barge in the ocean.

At 11,000 kilotons, the test produced more than double its predicted explosive energy of 4,000 kilotons. Its fireball, as seen below, is one of the most iconic images ever captured of a nuclear explosion. Test #123 was one of the 57 tests conducted by the Soviet Union in 1961. Most of these tests were conducted on the Novaya Zemlya archipelago in Northwestern Russia. The bomb yielded 12,500 kilotons of explosive energy, enough to vaporize everything within a 2.1 mile (3.5km) radius.

Castle Yankee was the fifth test in Operation Castle. The explosion marked the second-most powerful nuclear test by the U.S.

Castle Bravo, the first of the Castle Operation series, accidentally became the most powerful nuclear bomb tested by the U.S.

Due to a design error, the explosive energy from the bomb reached 15,000 kilotons, two and a half times what was expected. The mushroom cloud climbed up to roughly 25 miles (40km).

As a result of the test, an area of 7,000 square miles was contaminated, and inhabitants of nearby atolls were exposed to high levels of radioactive fallout. Traces of the blast were found in Australia, India, Japan, and Europe.

In 1962, the Soviet Union conducted 78 nuclear tests, three of which produced the fifth, fourth, and third-most powerful explosions in history. Tests #173, #174, and #147 each yielded around 20,000 kilotons. Due to the absolute secrecy of these tests, no photos or videos have been released.

Test #219 was an atmospheric nuclear test carried out using an intercontinental ballistic missile (ICBM), with the bomb exploding at a height of 2.3 miles (3.8km) above sea level. It was the second-most powerful nuclear explosion, with a yield of 24,200 kilotons and a destructive radius of ~25 miles (41km).

Tsar Bomba, also called Big Ivan, needed a specially designed plane because it was too heavy to carry on conventional aircraft. The bomb was attached to a giant parachute to give the plane time to fly away.

The explosion, yielding 50,000 kilotons, obliterated an abandoned village 34 miles (55km) away and generated a 5.0-5.25 magnitude earthquake in the surrounding region. Initially, it was designed as a 100,000 kiloton bomb, but its yield was cut to half its potential by the Soviet Union. Tsar Bomba’s mushroom cloud breached through the stratosphere to reach a height of over 37 miles (60km), roughly six times the flying height of commercial aircraft.

The two bombs dropped on Hiroshima and Nagasaki had devastating consequences, and their explosive yields were only a fraction of the 10 largest explosions. The power of modern nuclear weapons makes their scale of destruction truly unfathomable, and as history suggests, the outcomes can be unpredictable.