Growing cannabis isn’t like growing any other plant in your backyard. It requires a relentless commitment to the best practices from seed to sale—just ask Grown Rogue, an award-winning producer from Oregon state.

As with most plants, the journey to premium cannabis starts with a seed. But as it continues up the chain, a meticulous growing process, the science underpinning its medical properties, genetics, and thorough testing all play a part in bringing about the ideal consumer experience.

With thousands of cannabis strains in the world, every seed is full of possibilities. Each contains a unique genetic profile that’s responsible for its properties and potency. Experienced growers use selective breeding to uncover new and innovative strains, with assistance from genomics.

They collect thousands of seeds, and sequence their DNA. Using analytics and prediction of those sequences, researchers are able to experiment with new strains— and send the resulting seeds back to the breeder. In this way, experienced growers can discover which cannabis strains are the most consistent and reliable.

To ensure a high quality cannabis plant, every aspect of how it’s grown needs careful monitoring and refining. After selecting the right seeds, they must be regularly examined for the right balance of humidity and light. Once it becomes a seedling, it needs maximum light and steady water levels.

When leaves start to grow and the plant is vegetative, nutrients must be carefully mixed for optimal conditions. Now comes the flowering stage when the essential trichomes are formed, and where the main cannabinoids CBD and THC come from.

Finally, growers have to harvest the cannabis plants at the right time for the best taste, smell, and potency. Curing, drying, and hand trimming all preserve the important qualities of the plant.

Scientific terminology can often be confusing, but in the case of cannabis, they result in important quality distinctions. Over 80+ cannabinoids, including THC and CBD, cause diverse effects on the body. Terpenes, which can also be found in essential oils, influence the flavor and scent of a cannabis strain.

These two compounds, terpenes and cannabinoids, combine in the “entourage effect” to enhance the medical value of the cannabis flower. Phenotypes help to elaborate on the genetic histories of cannabis strains beyond indica, sativa, or hybrid. Meanwhile, experience studies which leverage the consumer experience, can be the “x factor” in finding and developing new cannabis products.

Consumers today want more than just to “get high” — they demand cannabis products to suit their different needs. For example, here are Grown Rogue’s strain selections which offer something different depending on the purpose:

It’s clear that what consumers want from their cannabis products will drive innovation in the industry. Premium cannabis producers optimize this by combining scientific research with qualitative experience sampling, to create ideal experiences around activities like socializing, post-workout recovery, and yoga.

Grown Rogue is a cannabis brand passionate about the community, environment, and education. The company seeks to provide “the right experience, every time” to consumers looking for only the very best cannabis products.

Everything You Need to Know About In-Situ Mining

The Rise of Cannabis Treatments for Pets

The History of Cannabis Prohibition in the U.S.

Cannabis is federally illegal in the U.S., but it wasn’t always that way. Here’s a look at the timeline of cannabis prohibition in the U.S. The History of Cannabis Prohibition in the U.S.

The legal status of cannabis in the U.S. isn’t always clear. At the federal level, it is an illegal Schedule I drug. However, individual states have the ability to determine their own laws around cannabis sales and usage.

But cannabis was not always illegal at the top level. It was only in the last 100 years that cannabis faced a prohibition similar to the alcohol prohibition of the early 1920s.

In this infographic from Tenacious Labs, we explore the fascinating history of cannabis prohibition in the U.S. dating all the way back to the 1900s.

The Early History of Cannabis Legality

The earliest laws surrounding the cannabis plant in the U.S. were drafted before the country was even founded. In 1619, a law was passed in the colony of Virginia which required every single farm to grow cannabis and produce hemp, an important commodity at the time.

Over time, marijuana from the cannabis plant started to be used for medicinal purposes. Early recreational use was first introduced by Mexican immigrants in the early 1900s.

Flash forward to the 1930s, when the country was struggling financially during the Great Depression. To encourage economic growth, alcohol prohibition was lifted, and those who had supported teetotalling began to target marijuana instead. At the time, cannabis was consumed largely in black and Mexican communities, and racist attitudes began to shape an association between crime, lewd behavior, immorality, and marijuana.

The 1930s marked the beginning of America’s war against marijuana. Here’s a glance at some of the most famous laws around cannabis prohibition:

In 1937, the Marihuana Tax Act was enforced, prohibiting marijuana federally but still allowing medical use. Prior to that, 29 states had already outlawed marijuana on their own.

But by the 1950s, a counterculture movement had begun, with young people using marijuana recreationally much more than previous generations.

Eventually, the Boggs Act (1952) and Narcotics Control Act (1956) were put in place to combat the counterculture. These laws set mandatory sentences for drug-related offenses, including marijuana. A first-offense marijuana possession conviction could result in a minimum sentence of 2-10 years with a fine of up to $20,000.

In 1970, cannabis was classified as a Schedule I drug—the same category as heroin—under the Controlled Substances Act. However, the 70s also saw an opposing shift, with a number of states beginning to decriminalize marijuana.

ℹ️ Decriminalization means that although possessing marijuana remains illegal, one is not subject to prosecution or jail time for possessing certain amounts.

After decriminalization, commercial businesses began to capitalize and started to market marijuana-related products. Some products were marketed towards children, which, in tandem with the intensive hippie culture from the 70s, sparked a war against marijuana led by parents and supported by president Ronald Reagan.

In 2021, a total of 18 states have fully legalized cannabis, while another 26 have allowed marijuana usage for medicinal purposes in some capacity. Furthermore, the MORE Act—a bill to legalize marijuana federally—was reintroduced in the House of Representatives in May 2021.

If passed, the MORE Act (the Marijuana Opportunity Reinvestment and Expungement Act) would essentially remove cannabis from its classification as a Schedule I drug under the Controlled Substances Act. It would also work towards the expungement of criminals who were charged with crimes related to marijuana.

While the U.S. government has gone back and forth with cannabis legalization over the years, it appears that in the 21st century, the path only leads one way: towards federal legalization.

This graphic explores how the $1.5 trillion ocean economy can help fight against some of the toughest challenges facing the world today. 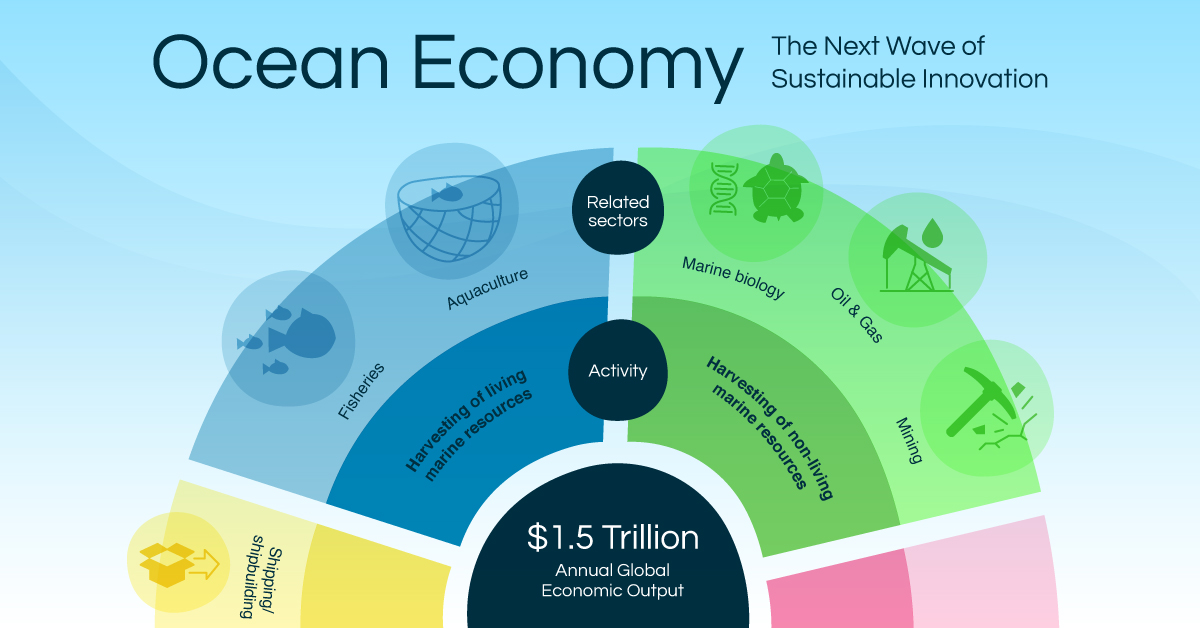 Roughly 21–37% of total greenhouse gas (GHG) emissions are attributable to our current food system, which includes conventional agriculture and land use according to the latest IPCC report.

With the global population rising and more mouths to feed, now is the time to reconsider how we can tap into our global resources to build a more sustainable food system.

This infographic from Billy Goat Brands (CSE: GOAT) (“GOAT”) explores how the ocean economy—also referred to as the blue economy—plays a vital role in our fight against climate change and other environmental challenges facing the world today.

What is the Ocean Economy?

The ocean economy is described as the sustainable use of the ocean and its resources for economic development and ocean ecosystem health.

Financing ocean-related economic activities will ensure the future sustainability of this vital resource, and help combat threats that pose a risk to humanity, such as overfishing, pollution, and habitat destruction.

However, some experts say that there is insufficient private and public investment in sustainable ocean economy activities.

Investors have a unique opportunity to drive change through companies innovating in the ocean economy and be part of the solution.

The potential for economic growth will only continue to grow, presenting investors and institutions with a chance to add value at this crucial stage of development while making a real and tangible impact.

In fact, investing $1 in key ocean activities can yield at least $5 in global benefits—a number that will continue to rise over the next 30 years according to a World Resources Institute report.

The report also states that investing between $2 trillion and $3.7 trillion globally across four crucial areas could generate between $8.2 trillion and $22.8 trillion in returns by 2050. These four areas are:

An Ocean of Possibilities on the Horizon

Plant-based alternatives will play an important role in alleviating the pressure on ocean resources, and technological innovation has been pivotal in creating imitation products for the consumer market.

“We believe that plant-based seafood alternatives should be available for everyone, everywhere. That’s why we spent years creating a seamless experience that’s nearly indistinguishable from their animal-based counterparts.”
—Mike Woodruff, CEO Sophie’s Kitchen

Sophie’s Kitchen is one of GOAT’s investee companies and a leading California-based manufacturer and distributor of disruptive plant-based seafood alternatives.

Go to billygoatbrands.com to learn more about investing in the ocean economy today.