Bitcoin is now part of a select very few assets that hold a market cap greater than $1 trillion. How long did it take to get there? Bitcoin is the Fastest Asset to Reach $1 Trillion

The world is moving forward at an accelerated pace. Historically, it’s taken multiple decades for companies to be worth $1 trillion. For bitcoin, it took just 12 short years to reach such a milestone.

To help put things into perspective, here’s a look at how long it took America’s biggest tech companies to reach the $1 trillion market cap.

Bitcoin has been subject to widespread commotion in markets.

At the start of 2021, the cryptocurrency had a more modest market cap of $500 billion, but has gained more than another $500 billion since. An onslaught of headlines has contributed to extremely bullish investor sentiment, including:

1. CEOs begin to show interest
Elon Musk and Jack Dorsey have made sizable investments in bitcoin through Tesla and Square, respectively. It’s estimated the gain from Tesla’s $1.5 billion bitcoin investment was greater than the profits from the entirety of their business in 2020.

2. New ETFs on the block
Multiple Bitcoin ETFs focused were recently approved by Canadian regulators and some have already launched on the Toronto Stock Exchange (TSX). For many years, the Grayscale Bitcoin Trust (GBTC) was the only readily accessible investment vehicle trading on equity markets that had exposure to BTC.

3. Financial institutions finally joining in?
Mastercard, Visa, and Bank of New York Mellon have made announcements to make it easier for customers to use cryptocurrencies.

On to the Next Trillion?

Future projections for the price of bitcoin are garnering more extreme and widening price targets.

The accelerated rate of change today has many of the Big Tech companies already inching closer to the next trillion in value. Will bitcoin follow suit?

Source: coinmarketcap.com
Notes: Financial data is as of April 12, 2021

What The Data Says About Wealth Inequality 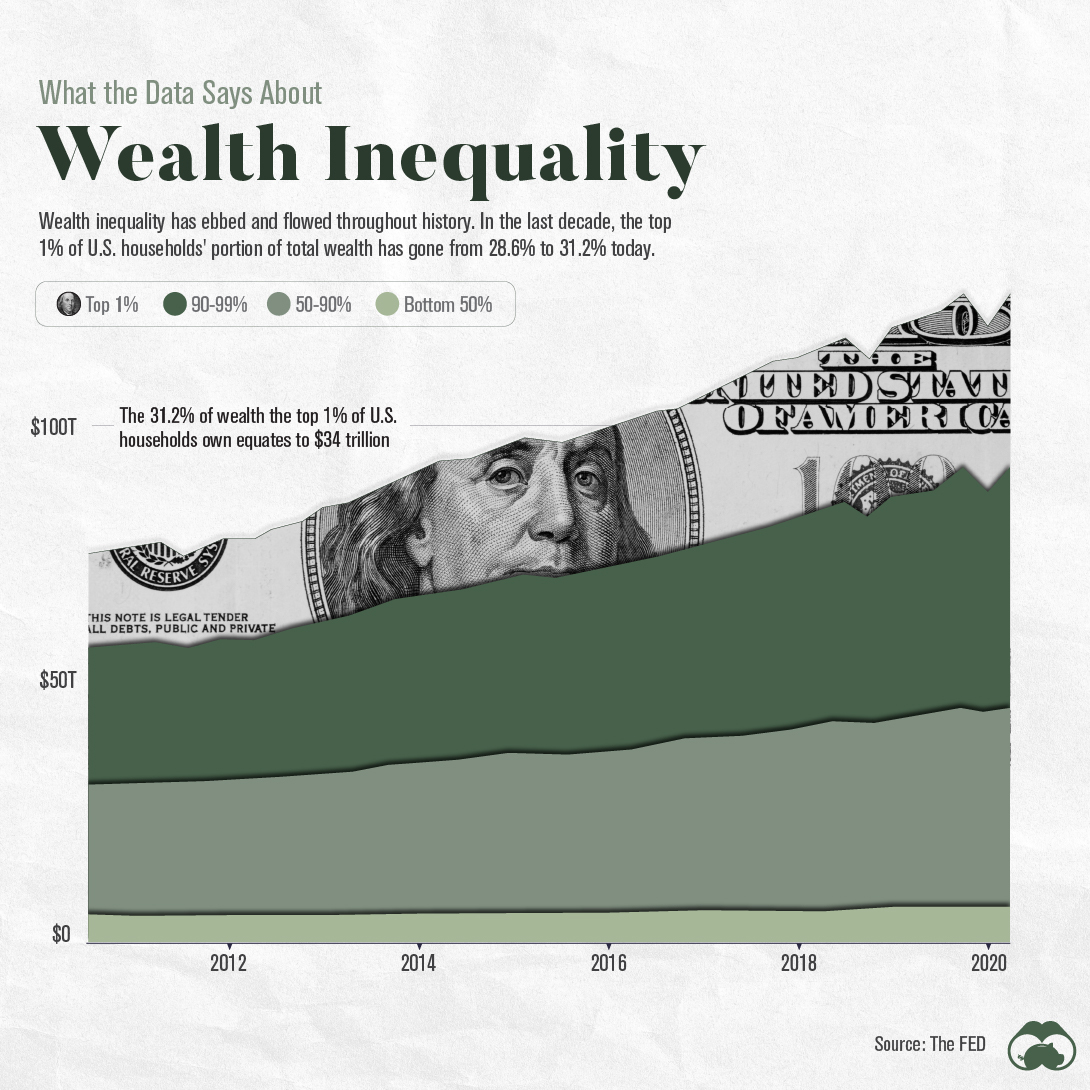 What The Data Says About Wealth Inequality

Wealth inequality has gone through peaks and troughs throughout history.

However, when expressed in raw dollars, things begin to look different. Wealth during the same period for the 1% went from approximately $17.5 trillion to $35 trillion. Meanwhile, the total wealth pool rose from $60 trillion to $112 trillion.

In other words, all households by category have amassed wealth during the same period, albeit at different rates.

The longest bull market in history, which went from March 2009 to February 2020, has been a big driver for the recent divergence. The U.S. composition of wealth for the top 1% of households skews towards corporate equities and mutual funds, of which they collectively own $14 trillion. By contrast, the bottom 50% of households own $0.16 trillion.

It’s often said a stock market correction is long overdue. Since the top 1% of households clearly have the most skin in the game, if one were to transpire, wealth inequality would likely retract.

Although the inequality of wealth is heavily discussed in today’s climate, the numbers have been higher before.

Wealth inequality, measured by the top 1% of U.S. households’ portion of wealth, was at its peak at the start of the 20th century. Back then, a harsh and more concrete class divide with lower rates of upward mobility were common themes.

At its peak in 1910, the top 1% of U.S. households owned well over 40% of all wealth. Major world wars and the Great Depression seemed to be catalysts against this, and the years after WWII brought about some of the lowest levels of inequality seen in the modern era.

Wealth inequality has ebbed and flowed throughout history, but it has steadily crept back up in the last few decades. Today, its adverse effects continue to garner the attention of more people—including policy makers who are facing immense pressure to find a solution.