Ranked: America's Best States To Do Business In

The United States often ranks as one of the best countries to start a business in, but the ease with which one can do business varies state by state. There are many considerations that factor into starting a business like the available workforce, the condition of local infrastructure, access to investors, a culture that’s open to business, and so on.

This map ranks America’s best states to do business in based on a study from CNBC which measured 88 factors across 10 broad categories.

Here is a further breakdown of the weight given to each of the 10 categories: The Most Business Friendly States

North Carolina—coming in first place in the ranking—attracts an extremely talented and innovative workforce, largely thanks to the state’s investment in its Research Triangle Regional Partnership (RTRP).

Notably, there are three ties in the ranking: New York and South Carolina had the same score, tying for 36th, Connecticut and Nevada tied for 39th, and Hawaii and New Mexico tied for 46th.

Other states ranking high on the list are Washington, Virginia, and Colorado. One of the newest individual metrics CNBC took into consideration was an openness to the cannabis industry, likely playing into Colorado’s move up from 8th to 4th compared to last year.

Some states that perhaps surprisingly don’t crack the top 10 include California and New York, both often considered centers of finance and entrepreneurship. But with the high costs of living and of starting a business in those states, their overall score is reduced.

A Look at the Scoring — North Carolina, California, and Nevada

To better understand how this ranking works we’ve broken down three different states and how they ranked in all 10 categories that gave them their overall spot. Here’s a brief look at their place in each category: While North Carolina is the number one state to do business in and has an extremely strong economy, they are 26th when it comes to the Cost of Doing Business. 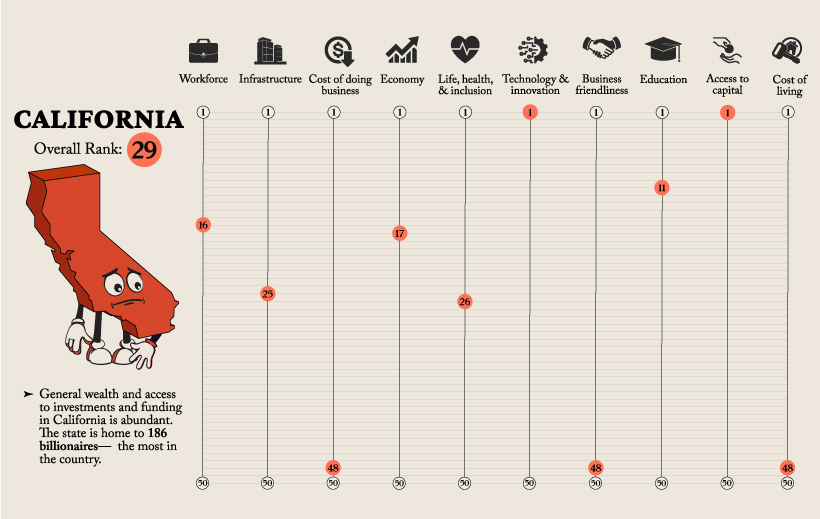 Whereas California ranks low overall, the state ranks first in terms of Technology and Innovation, as well as Access to Capital. Although Nevada scored highly in the Infrastructure and Business Friendliness categories, the state scored poorly in Technology and Innovation, and was dead last in the Education category.

New business applications have actually decreased 4% this year in comparison to the same timeframe in 2021.

Here’s a look at new business applications by region as of July 2022:

New business applications in July were the highest in the retail trade industry, numbering around 69,000 new applications, according to the U.S. Census Bureau. Applications for professional service businesses were the second highest at 53,000, followed closely by construction businesses at 43,000.

Here’s a closer look at the industry breakdown:

A potential looming recession, alongside rising interest rates and inflation, may be creating a sense of cautiousness among businesspeople, leading to the lower rate of business applications compared to last year. And, at existing companies, the economic situation has lead to cuts in growth forecasts and subsequently, major layoffs.

But overall, the U.S. is a country which values entrepreneurship—even during the pandemic, massive spikes in new business formations were recorded—and certain industries and states will continue to flourish in any business environment.