Infographic: The Present and Future of the Internet of Things

The Present and Future of the Internet of Things

The Internet of Things (IoT) is a technology macrotrend that we have covered previously both here and here. This particular infographic shows how we got to where we are today, and what it means for the future.

The most important factors that have made the IoT possible is the decreases in cost for the technology that makes it possible. The average cost of sensors, bandwidth, and processing have all dropped down substantially since the birth of the internet. Combined with smart phones and ubiquitous wifi, this creates an environment where everything can be linked and optimized through big data. Thousands or millions of seemingly insignificant data points can be very relevant to decision-making and optimization once they are processed and analyzed.

The future of the Internet of Things starts with a mega expansion of connectivity as every new electronic device, car, home appliance, and industrial item gets connected to the web. Personal lives, cities, workplace productivity, and consumption will all change. The growth and maturity of the wearable market is one such area that will change the workplace alone.

Growth of the Internet of Things is expected to peak in 2015: Is Big Tech In Another Bubble?

Central bank digital currencies are on the horizon. What do 65 central banks representing 91% of global GDP think about them? In the late 1600s, the introduction of bank notes changed the financial system forever. Fast forward to today, and another monumental change is expected to occur through central bank digital currencies (CBDC).

A CBDC adopts certain characteristics of everyday paper or coin currencies and cryptocurrency. It is expected to provide central banks and the monetary systems they govern a step towards modernizing.

But what exactly are CBDCs and how do they differ from money we use today?

The ABCs of CBDCs

To better understand a CBDC, it helps to first understand the taxonomy of money and its overlapping properties.

For example, the properties of cash are that it’s accessible, physical and digital, central bank issued, and token-based. Here’s how the taxonomy of money breaks down:

In essence, digital currency is the electronic form of banknotes that exists today. Therefore, it’s viewed by some as a modern and efficient version of the cash you hold in your wallet or purse.

Digital currencies are issued by a central bank, and therefore, are backed by the full power of a government. According to the Bank for International Settlements, over 20% of central banks surveyed say they have legal authority in issuing a CBDC. Almost 10% more said laws are currently being changed to allow for it.

As more central banks issue digital currencies, there’s likely to be favorability between them. This is similar to how a few currencies like the U.S. dollar and Euro dominate the currency landscape.

The Benefits of Issuing a CBDC

There are several positives regarding the issuance of a CBDC over other currencies.

First, the cost of retail payments in the U.S. is estimated to be between 0.5% and 0.9% of the country’s $20 trillion in GDP. Digital currencies can flow much more effectively between parties, helping reduce these transaction fees.

Second, large chunks of the global population are still considered unbanked. In this case, a CBDC opens avenues for people to access the global financial system without a bank. Even today, 6% of Americans do not have a single bank account.

Other motivations for a CBDC include:

An example of payments efficiency can be seen during the onset of the COVID-19 pandemic, when some Americans failed to receive their stimulus check. Altogether, some $2 billion in funds have gone unclaimed. A functioning rollout of a CBDC and a more direct relationship with citizens would minimize such a problem.

Although widespread adoption of CBDCs is still far away, research and experiments are making notable strides forward:

The U.K. central bank is less optimistic about a rolling out a CBDC in the near future. The proposed digital currency—dubbed “Britcoin”—is unlikely to arrive until at least 2025.

Disrupting The World of Money

Wherever you look, technology is disrupting finance and upending the status quo.

This can be seen through the rising market value of fintech firms, which in some cases are trumping traditional financial institutions in value. It is also evident in the rapid rise of Bitcoin to a $1 trillion market cap, making it the fastest asset to do so.

With the rollout of central bank digital currencies on the horizon, the next disruption of financial systems is already beginning.

From Amazon to Zoom: What Happens in an Internet Minute In 2021?

A lot can happen in an internet minute. This stat-heavy graphic looks at the epic numbers behind the online services billions use every day. 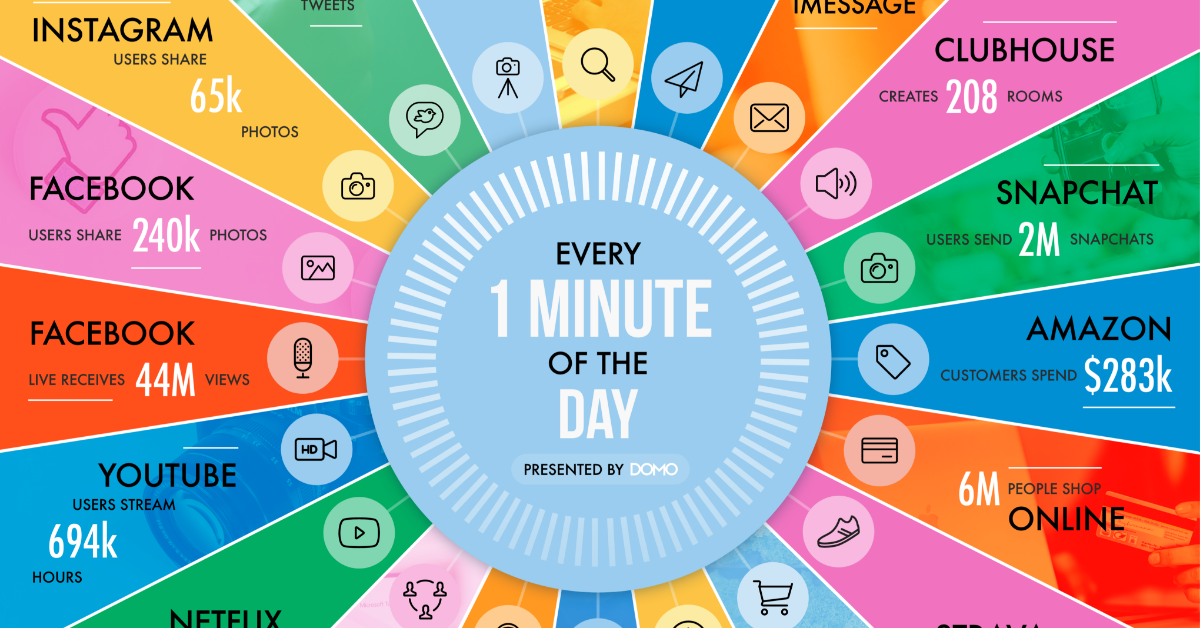 In our everyday lives, not much may happen in a minute. But when gauging the depth of internet activity occurring all at once, it can be extraordinary. Today, around five billion internet users exist across the globe.

This annual infographic from Domo captures just how much activity is going on in any given minute, and the amount of data being generated by users. To put it mildly, there’s a lot.

At the heart of the world’s digital activity are the everyday services and applications that have become staples in our lives. Collectively, these produce unimaginable quantities of user activity and associated data.

Here are just some of the key figures of what happens in a minute:

As these facts show, Big Tech companies have quite the influence over our lives. That influence is becoming difficult to ignore, and draws increasing media and political attention. And some see this attention as a plausible explanation for why Facebook changed their name—to dissociate from their old one in the process.

One tangible measure of this influence is the massive amount of revenue Big Tech companies bring in. To get a better sense of this, we can look at Big Tech’s revenue generating capabilities on a per-minute basis as well:

Much of the revenue that these elite trillion-dollar stocks generate can be traced back to all the activity on their various networks and platforms.

In other words, the 5.7 million Google searches that occur every minute is the key to their $433,014 in per minute sales.

The Internet Minute Over The Years

With the amount of data and information in the digital universe effectively doubling every two years, it’s fair to say the internet minute has gone through some changes over the years. Here are just some areas that have experienced impressive growth:

Here’s a look at the services that have been featured in the various iterations of this graphic over the years: 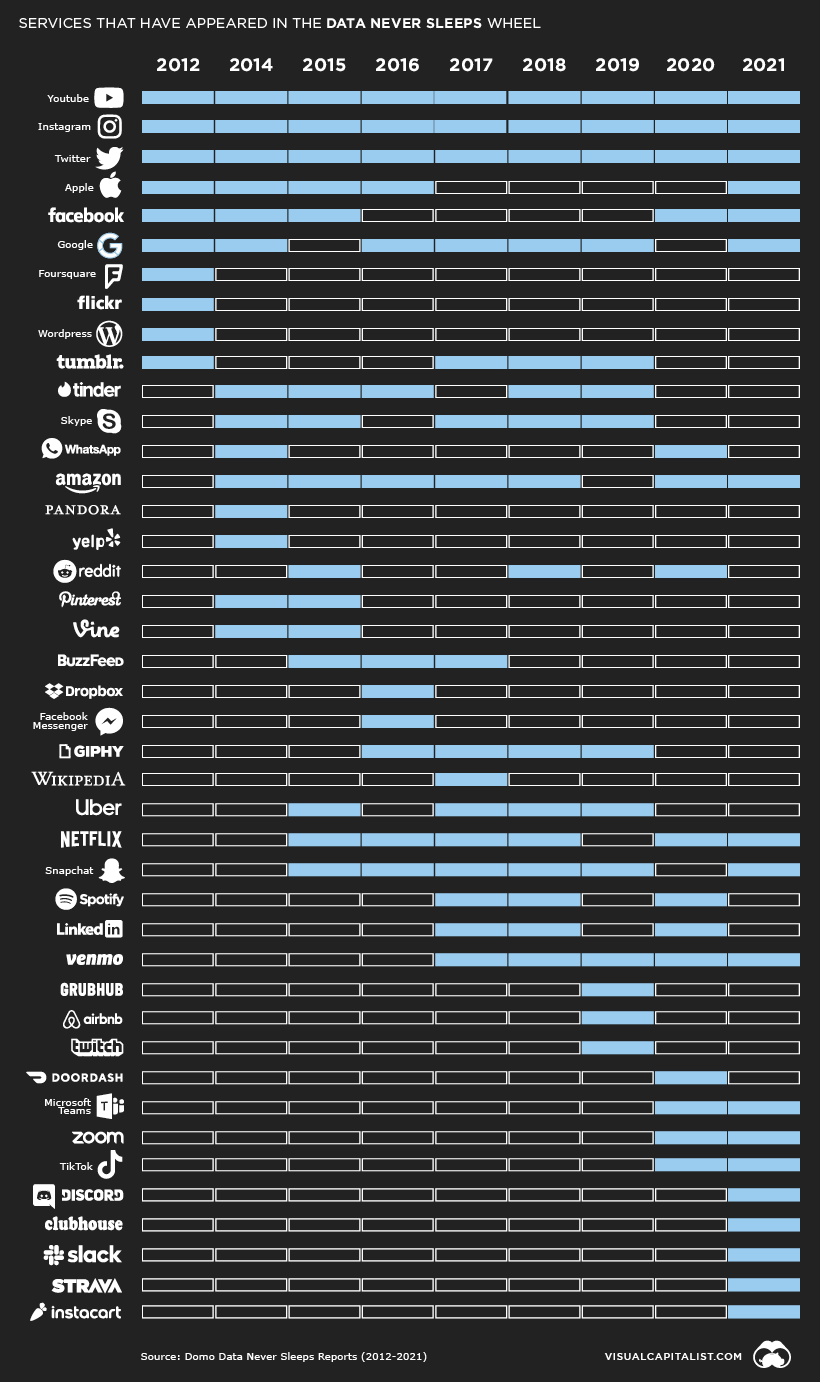 The Internet Minute wheel also helps to put the internet’s rapid rate of adoption into perspective. For instance, in 1993, there were only 14 million internet users across the globe. But today, there are over 14 million just in Chile.

That said, the total addressable market still has some room left. By some measures, the complete number of internet users grew by 500 million in 2021, a roughly 11% jump from 4.5 billion users in 2020. This comes out to an astonishing 950 new users on a per minute basis.

What’s more, in the long term, with the appropriate infrastructure in place, certain areas within emerging markets can experience buoyant growth in the number of connected citizens. Here’s where the next billion internet users may come from, based on the largest disconnected populations.

With this growth trajectory in mind, we can expect future figures to become even more astonishing. But the human mind is known to be bad at interpreting large numbers, so in future editions, the internet minute figures may need to be stripped down to the internet second.