Infographic: Olympic Gold Medals Have Almost Zero Gold in Them

The 2016 Rio Summer Olympic Games are already 51% over budget, with the total cost expected to be in the $4.6 billion range. With that in mind, the organizers have tried their best to cut costs.

One area of compromise?

Olympic Gold Medals Have Almost Zero Gold in Them

Today’s infographic comes from JM Bullion and it shows the real amount of metal in gold, silver, and bronze medals, along with the hypothetical cost of awarding solid gold to winning athletes.

That’s right, gold medals are actually 98.8% silver, with just a thin 1.2% coat of gold paint. The thin layer of gold meets the minimum requirement set by IOC says for the amount of gold actually in the gold medal – just six grams.

The material cost of a gold medal right now based on this composition is $548. Almost half of that comes from the six grams of gold, while the rest comes from the 494 grams of sterling silver.

The silver and bronze medals have material costs of $292 and $2.16 respectively.

Why Doesn’t the Olympics Use Solid Gold Medals?

Solid gold medals haven’t been awarded to Olympic athletes since the 1912 Stockholm Games. Back then, medals were a mere 33mm in diameter and made of silver gilded with gold. It’s easy to see why organizers have gone this route when you take into account the difference in material costs.

Each gold medal at the Rio Games currently costs $548 for materials – if they were solid gold that cost would balloon to $21,674 per medal. That means that if all 812 gold medals were solid gold, the tab would be a grand total of $17.6 million. That’s not including minting or additional security costs, either.

With the 2016 Rio Summer Olympic Games already 51% over budget, we can forgive the organizers for sticking to the minimum required amount of gold for each medal. 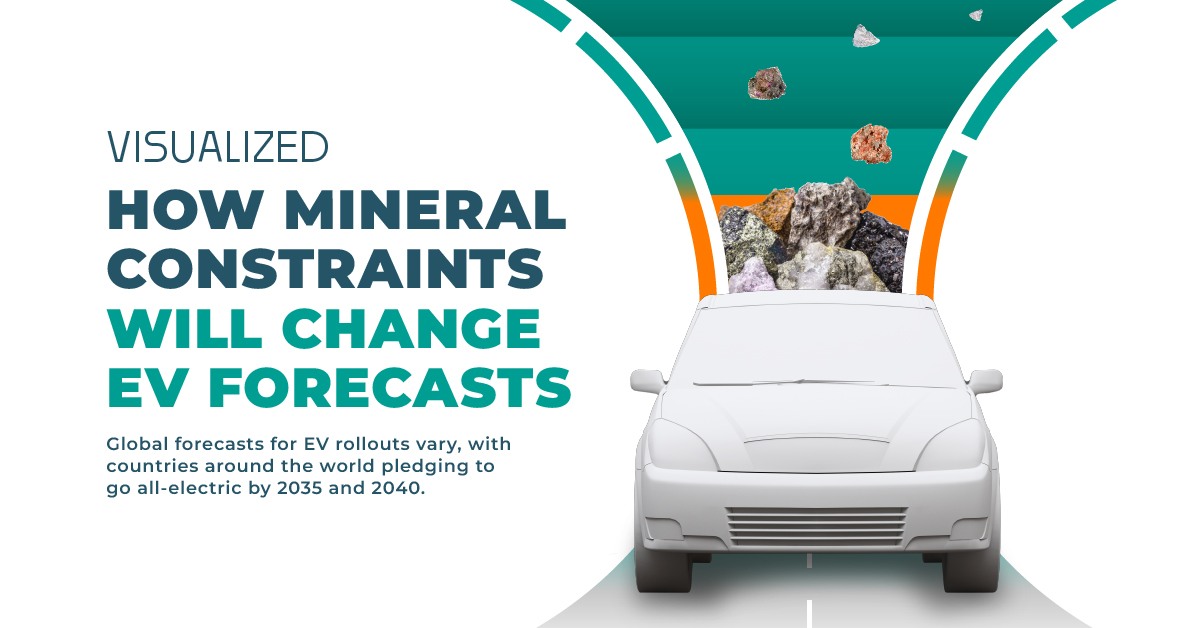 Did you know that EVs need up to six times more minerals than conventional cars?

EVs are mineral-intensive and are pushing up demand for critical battery metals. According to the International Energy Agency (IEA), lithium, nickel, and cobalt demand is expected to grow from 10%-20% to over 80% by 2030.

As countries around the world pledge to go all-electric by 2035 and 2040, do we have enough mineral supply for EV demand?

Factors such as geopolitical concentration of resources, quality of materials, mining industry lead times, and environmental factors will together determine whether we have the minerals we need.

Let’s take a look at how critical minerals are affected.

Recycling is a partial solution to alleviate critical mineral supply but will fall short of meeting the high levels of demand until around the 2030s.

Currently, the resources for EV batteries are concentrated in very few countries. This concentration is an increasing concern for supply chain distribution.

China is home to more than half of the world’s lithium, cobalt, and graphite processing and refining capacity, as well as three-quarters of all lithium-ion battery production capacity.

Europe accounts for more than one-quarter of worldwide EV assembly, but home to very little of the supply chain, with the region’s cobalt processing share accounting for 20% of the mix.

Meanwhile, both Korea and Japan control a sizable portion of the downstream supply chain after raw material processing. Korea accounts for 15% of worldwide cathode material production capacity. Japan produces 14% of cathode and 11% of anode material.

The United States accounts for just 10% of EV production and 7% of battery production capacity.

In this scenario, platinum group metals (PGMs) continue to play a leading role in the auto industry by assisting in building cleaner emission vehicles.

These vehicles support more sustainable fuels such as hydrogen, filling the gaps to net-zero targets by allowing EVs to catch up with material supply