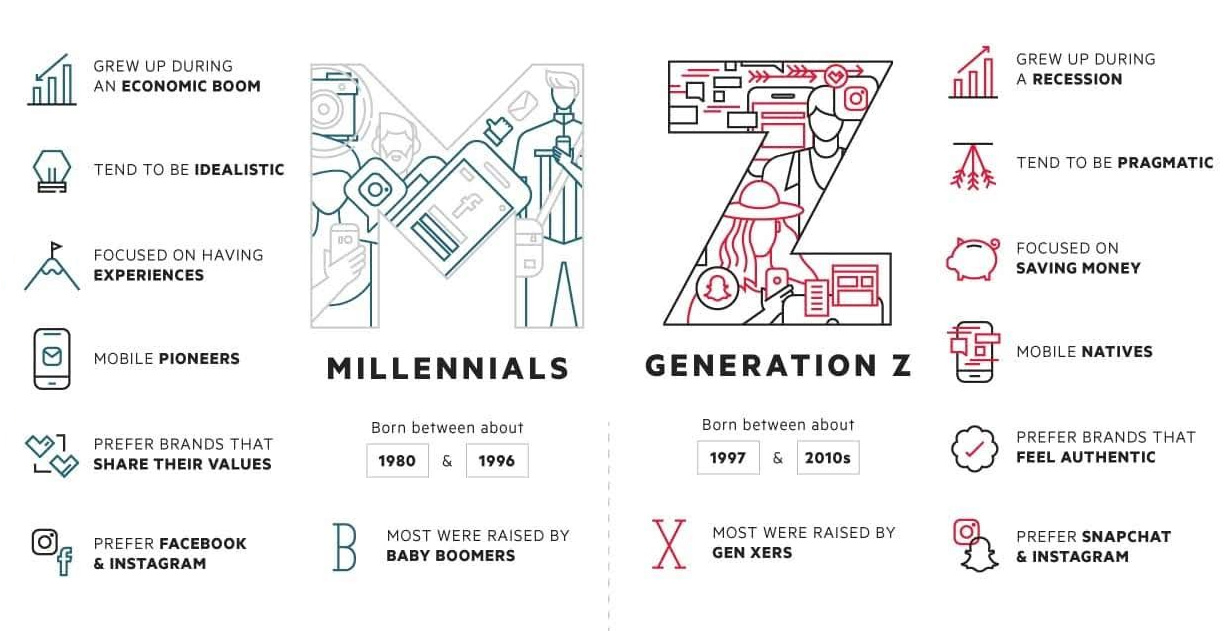 Every generation approaches the workplace differently.

While talk over the last decade has largely focused on understanding the work habits and attitudes of Millennials, it’s already time for a new generation to enter the fold.

Generation Z, the group born after the Millennials, is entering their early adult years and starting their young careers. What makes them different, and how will they approach things differently than past generations?

Today’s infographic comes to us from ZeroCater, and it will help introduce you to the newest entrant to the modern workforce: Generation Z.

There is no exact consensus on the definition of Generation Z, and demographers can differ on where it starts. Some have Gen Z beginning as early as the mid-1990s, while others see it starting in the mid-2000s.

Regardless, Generation Z is the group that follows the Millennials – and many Gen Zers are wrapping up high school, finishing up their university degrees, or looking to get their first real jobs.

While generational differences cast a wide net and don’t necessarily apply to every individual, here is what demographers say are some key similarities and differences between Gen Z and Millennials.

Generation Z tends to be more pragmatic, approaching both their education and career differently than Millennials. It appears that Gen Z is also approaching money in a unique way compared to past groups.

Generation Z does not remember a time when the internet did not exist – and as such, it’s not surprising to learn that 50% of Gen Z spends 10 hours a day connected online, and 70% watches YouTube for two hours a day or more.

But put aside this ultra-connectivity, and Gen Zers have some unique and possibly unexpected traits. Gen Z prefers face-to-face interactions in the workplace, and also expects to work harder than past groups. Gen Z is also the most diverse generation (49% non-white) and values racial equality as a top issue. Finally, Gen Z is possibly one of the most practical generations, valuing things like saving money and getting stable jobs.

You may already have Gen Zers in your workplace – but if you don’t, you will soon.

Mapped: The Median Age of the Population on Every Continent

The World’s Most Valuable Bank Brands

This timeline, from our Generational Power Index report, explores defining events in U.S. history that impacted each generation. Looking back at history is a necessity when trying to understand what the future may hold.

Using insights from our Generational Power Index 2021 report, along with survey data from Pew Research in 2016, we identified some key milestones for each cohort, to understand how these events helped shape each generation’s unique perspectives.

Before diving in, it’s important to clarify which generations we’ve included in our research, along with their age and birth year ranges.

These generational categories aren’t universal, but we went with the most widely cited definitions from reputable U.S. sources including the Pew Research and the U.S. Federal Reserve. It’s also worth noting that these generational definitions are somewhat specific to North America. For this reason, the focus is on U.S. historic events.

The oldest members of the Silent Generation were 11 years old at the start of World War II, and were teenagers by the time it ended. In other words, their formative years fell smack dab in the middle of one of the biggest international conflicts in modern history.

Because of this, it makes sense that World War II ranks as the second most impactful event in their lifetimes, trailing only the far more recent Sept. 11 terrorist attacks (2001).

In fact, the Silent Generation cited four different wars on their list, more than any other cohort. For context, Boomers identified three conflicts (including the Cold War), while Millennials only referenced one (Iraq/Afghanistan).

Of course, other not-so-violent events made the list as well. And interestingly, some of these impressionable moments occurred later on in life.

For example, the youngest members of The Silent Generation were already in their mid-t0-late forties when cellphones became common in the ‘90s—yet, 27% identified the tech revolution as one of the top 10 most impactful events that happened in their lifetime.

Clearly, life never stops throwing you curve balls—no matter how far along you might be.

Many of the historical experiences cited by Baby Boomers were related to war and violent acts. For instance, Boomers identified two assassinations on their list—John F. Kennedy’s in 1963, and Martin Luther King’s in 1968.

For this generation, the moon landing in 1969 made the cut, as did Barack Obama’s election win in 2008.

Baby Boomers only identified one event that was unique to their cohort (Martin Luther King’s death). It’s worth noting that responses varied between Americans of different racial backgrounds. Not surprisingly, Black Americans were far more likely to name MLK’s death as a top defining moment.

For Gen Xers, two unique events made their list: the Challenger disaster (1986) and the Gulf War (1991). Interestingly, neither of of these events stood out for other generations.

The Challenger disaster impact was widely felt because it involved civilians alongside astronauts, making the space shuttle’s explosion all the more notorious.

Hurricane Katrina (which occurred in 2005) is the only natural disaster to make it on any of these lists. The hurricane—which caused a significant share of New Orleans’ population to resettle—left a lasting impression on the nation.

Millennials remember the September 11 attacks the most of all generations, with 86% citing it as their most influential event. They also paid close attention to the aftermath of this occurrence, as marked by the inclusion of both the Iraq/Afghanistan wars and the death of Osama Bin Laden among their most notable events.

Sadly, a lot of Millennials recollect instances of gun violence more than any other generation, from Orlando and Columbine to Sandy Hook.

Last but not least, Millennials are the only generation to note the Global Financial Crisis of 2008, and the subsequent Great Recession, as a momentous event. This makes sense considering many of them began their careers in its aftermath.

The Pew Research survey data was collected in 2016, so opinions on more recent events have not been collected.

That said, it could be premature to say in the short term which events will leave a lasting impression on generations, young and old.

According to the above data, the election of Barack Obama was a lasting milestone in recent history. Will the election of Donald Trump leave a similar impact? How will COVID-19 be regarded in the future? Time will tell which events will define future generations.

Moments, Movements, and Everything in Between

One key takeaway worth emphasizing is just how varied these formative events can be. Some were experienced as a single moment, while others were a culmination of shifts over several years.

It’s also clear that timing and duration are not the only determining factors behind an event’s influence on American society. For example, the moon landing was a tangible moment with a date stamp, whereas the tech revolution has a much fuzzier start (before exploding in significance alongside the Dotcom boom and bust).

Also interesting is what is absent from the top results. For example, the Global Financial Crisis of 2008 is barely referenced.

In short, a variety of impactful events and more gradual revolutions have made their mark on American society. Some have influenced specific generations, while others have transcended generational boundaries and unified the American public.