How COVID-19 Has Impacted Media Consumption, by Generation

Media Consumption in the Age of COVID-19

As the coronavirus outbreak continues to wreak havoc across the globe, people’s time that would have otherwise been spent perusing malls or going to live events, is now being spent on the sofa.

During this period of pandemic-induced social isolation, it’s no surprise that people are consuming vast amounts of media. Today’s graphics use data from a Global Web Index report to explore how people have increased their media consumption as a result of the outbreak, and how it differs across each generation.

Global Web Index found that over 80% of consumers in the U.S. and UK say they consume more content since the outbreak, with broadcast TV and online videos (YouTube, TikTok) being the primary mediums across all generations and genders.

Unsurprisingly, 68% of consumers are seeking out pandemic updates online over any other activity. Gen Zers however, have other plans, as they are the only generation more likely to be listening to music than searching for news. 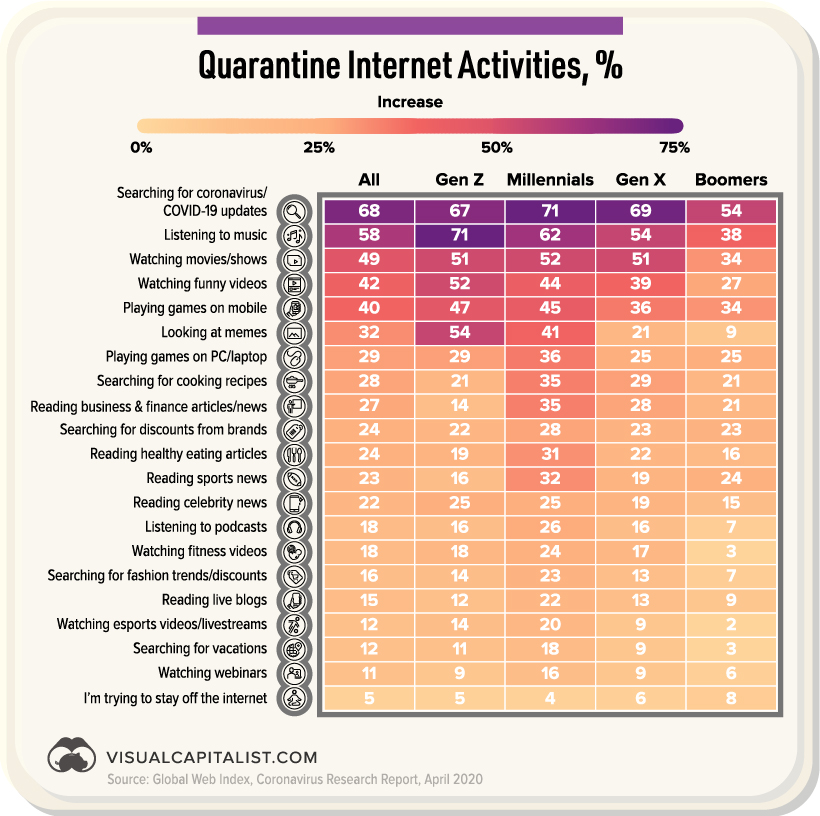 Overall, younger generations are more likely to entertain themselves by playing games on their mobile or computer. Millennials also stand out as the foodie generation, as they are the most likely to be searching for cooking recipes or reading up on healthy eating.

Leaning on a Pillar of Trust

Across the board, consumers view the World Health Organization (WHO) as the most trusted source of information for any COVID-19 related updates.

This isn’t true everywhere on a regional basis, however. For example, while U.S. consumers trust WHO the most, UK consumers view their government as their most trusted news source overall. 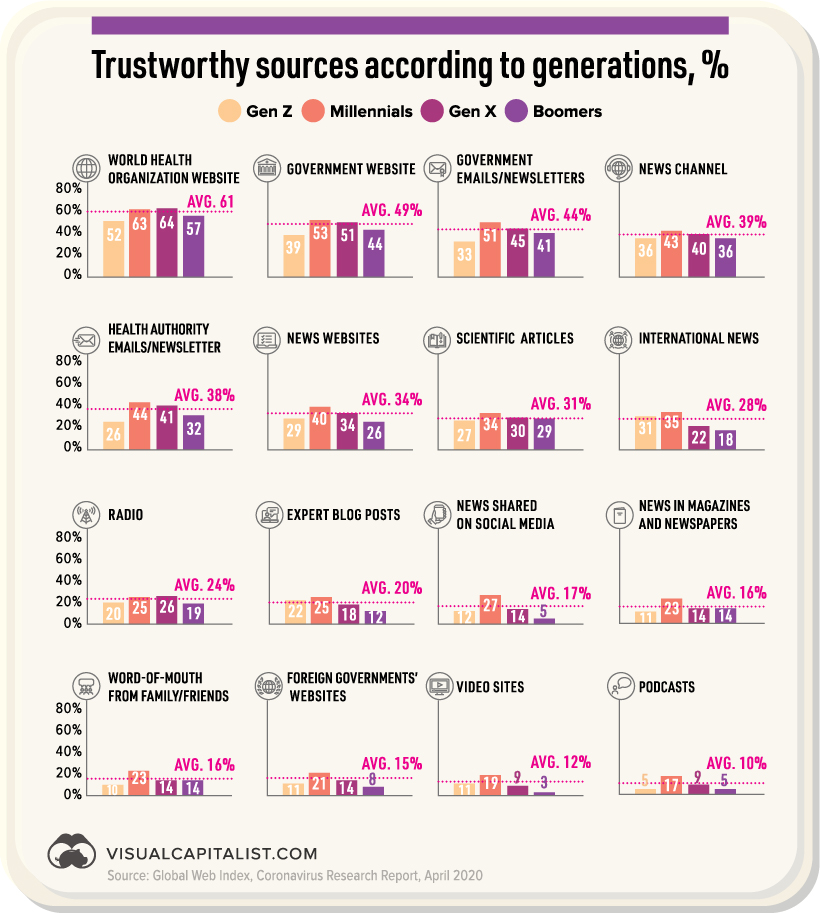 The Need for Pandemic Positivity

While staying abreast of pandemic updates is important, ultimately, a positive mindset and the ability to switch off will help people cope better day-to-day.

Therefore, it seems reasonable that people are more inclined to invest in new subscription services since they have been in isolation, with almost one-third of Gen Zers considering purchasing Netflix, followed by Disney+. 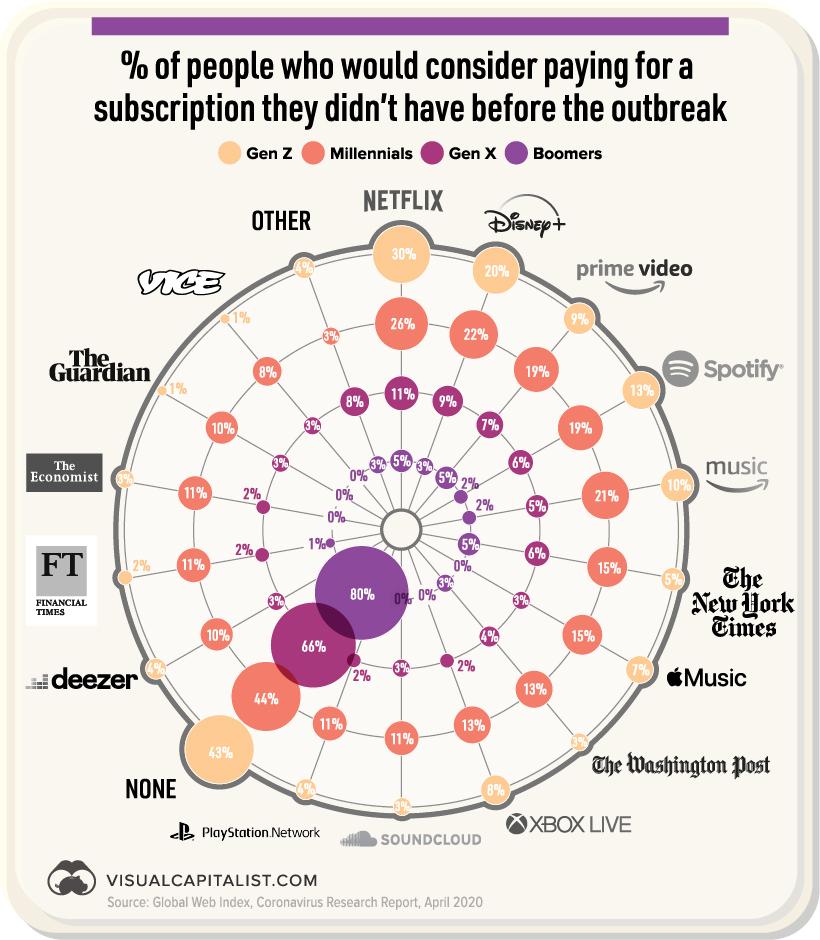 Understandably, people are becoming increasingly worried about how much time they are dedicating to their screens. However, research suggests that screen time itself is no cause for concern. Rather, it’s the content we choose to consume that could have a significant impact our psychological well-being.

Perhaps most intriguingly, the TV shows and movies that are increasing in popularity on Netflix are about pandemics—which could signify the need for people to fictionalize the chaos we find ourselves in.

Regardless of what type of content we are consuming, the fact is that every generation is relying on their devices during this pandemic to inform and distract more than ever before, creating a huge opportunity for media companies to engage a captive audience.

The Most Loved Brands, by Generation

Ranked: The Reputation of 100 Major Brands in the U.S.

What comes to mind when you think of a good or bad brand? This poll ranks the brand reputation of 100 major companies in America. Ranked: The Reputation of 100 Major Brands in the U.S.

Whether you’re a country or a company, brand reputation is crucial. For corporations trying to stand out amongst an array of competitors, name recognition can be make or break.

The Axios Harris Poll polled a nationally representative sample of nearly 43,000 Americans to find out which 100 companies emerge as top of mind—for better or for worse.

How is Brand Reputation Measured?

The polling process started by asking respondents which two companies they felt excelled or faltered in the U.S.—in other words, which companies were the most “visible” in their eyes.

The top 100 brands that emerged from this framework were then judged by poll respondents across seven dimensions, over three key pillars:

Once these dimensions are taken into account, the final scores portray how these “visible brands” rank in terms of their reputation among a representative sample of Americans:

Companies with a Very Poor reputation (a score below 50) didn’t make it into the list. Here’s how the 100 most visible companies stack up in terms of brand reputation:

While the ranking itself highlights well-respected and poorly-viewed brands overall, another perspective is to look at which brands shot up in the list, and which ones plummeted.

Unwavering and bold commitments to the environment has helped Patagonia to top the charts as the #1 brand, rising 31 ranks since 2020. From funneling 1% of sales into environmental donations to ensuring ethical supply chains, Patagonia’s culture, ethics, and citizenship all align with its business model in consumers’ eyes.

With over 33 million COVID-19 vaccine doses administered daily around the world, Pfizer’s contribution to the ongoing immunization progress is undeniable. As a result, its overall ranking has swelled by 54 places since 2020.

Dollar General might seem like a surprising addition to this table, but in terms of sheer growth, discount stores are thriving. Across America, dollar stores are opening at a rate of three per day, faster than any Starbucks or McDonalds.

There’s a crucial reason for this: in many rural areas, millions rely on dollar stores for food and other essentials, as the nearest grocery store can be nearly an hour’s drive away.

Despite steady revenue growth, Google is among a handful of Big Tech companies whose reputations are backsliding, dropping 36 places in the past year. The outsize power and influence these companies hold is increasingly coming under regulatory scrutiny.

Near the bottom of the 100 companies leaderboard, the struggles of mainstream media and modern information dissemination are strongly reflected. Despite their diverse audiences and established histories, brand reputations of both Facebook and Fox News have eroded in recent years.

This example highlights how the nature of a brand’s reputation can evolve over time. Building a strong and reputable brand may be subjective, but its effects on consumer loyalty are powerful.

This infographic examines trends in each generation’s media consumption to see how Americans adapted during the pandemic. View the full size version of this infographic by clicking here

Media consumption spiked in the early days of the COVID-19 outbreak as Americans actively sought information and entertainment while at home. Whether this changed over the course of 2020 remains unclear, however.

To dive deeper into the issue, this infographic explores each generation’s shifts in media consumption habits as the pandemic wore on.

Further below, we’ll also examine which media sources Americans deemed to be the most trustworthy, and why consumption habits may have changed for good.

The data in this infographic comes from two surveys conducted by Global Web Index (GWI). The first was completed in April 2020 (N=2,337) and asked participants a series of questions regarding media consumption during COVID-19.

To see how consumption had changed by the end of the year, the John S. and James L. Knight Foundation commissioned GWI to complete a follow-up survey in December 2020 (N=2,014). The following tables provide a summary of the results.

Unsurprisingly, a significant percentage of Gen Z reported an increase in digital media consumption in April 2020 in comparison to pre-pandemic habits. This bump was driven by higher use of online videos, video games, and online TV/streaming films.

By December 2020, these media categories became even more popular with this cohort. Most notably, podcasts saw the highest increase, jumping almost 15% by the end of the year.

The popularity of traditional outlets like broadcast TV and radio declined from their April 2020 highs, though they are still up relative to pre-pandemic levels for Gen Z survey respondents.

Results from the December 2020 survey show that Millennials trimmed their media consumption from earlier in the year. This was most apparent in news outlets (online and physical press), which saw double digit declines in popularity relative to April.

Books and podcasts were the only two categories to capture more interest from Millennials over the time period. It’s also worth noting that the percentage of respondents who said “none” for media consumption rose to 20.3%, up significantly from 9.1% in April.

Possible factors for the increase in “none” responses include easing government restrictions and a return to more normal work schedules.

The media consumption habits of Gen X developed similarly to Millennials over the year.

Broadcast TV and online press saw the largest declines over the time period, while once again, podcasts and books were the only two categories to capture more interest relative to April. The percentage of respondents reporting “none” rose to 28.9%—a slightly higher share than that of Millennials.

Media consumption trends among Baby Boomers were mixed, with some categories increasing and others decreasing since April. Broadcast TV saw the biggest decline in usage of all media types, but remained the most popular category for this cohort.

Boomers also had the largest share of “none” respondents in both studies (23.0% in April and 31.0% in December).

Where do Americans Go For Trustworthy News?

To learn more about American media consumption—particularly when it came to staying updated on the pandemic—survey respondents were asked to confirm which of the following sources they found trustworthy. The deviations between each generation don’t appear to be too drastic, but there are some key takeaways from this data.

For starters, Gen Z appears to be more skeptical of mainstream news channels like CNN, with only 28.9% believing them to be trustworthy. This contrasts the most with Gen X, which saw 40.1% of its respondents give news channels the thumbs up.

This story is flipped when we turn to the World Health Organization (WHO). Gen Z demonstrated the highest levels of trust in information published by WHO, at 50.3% of respondents. Only 39.0% of Gen X could say the same.

By far the least trustworthy source was foreign governments’ websites. This category had the lowest average approval rating across the four generations, and scored especially poor with Boomers.

The Lasting Effects of the Pandemic

Habits that were picked up during 2020 are likely to linger, even as life finally returns to normal. To find out what’s changed, respondents were asked which categories of media they expected to continue consuming in elevated amounts.

The chart below shows each generation’s top three responses. Note that the top three for both Gen Z and Millennials are all digital and online categories (video games can be played offline, but the majority of popular titles are online). This contrasts with the preferences of Gen X and Boomers, who appear to be sticking with more traditional outlets in broadcast TV and books.

With consumption habits of younger and older Americans moving in opposite directions, advertisers and media companies will likely need a clear understanding of their target audiences in order to be successful.