Mapping the Flow of the World’s Plastic Waste

The first plastic material, Bakelite, was invented in 1907. It made its way into everything you can imagine: telephones, chess pieces, Chanel jewelry, and electric guitars.

But it was in 1950 that our thirst for plastic truly began. In just 65 years, plastic production soared almost 200 times, resulting in about 6,300 million metric tons of waste today.

How does the world deal with this much debris? The truth is, a lot of plastic waste—both trash and recycled materials—is often shipped overseas to become someone else’s problem.

The Top Exporters and Importers of Plastic Waste

In honor of International Plastic Bag-Free day, today’s graphic uses data from The Guardian to uncover where the world’s plastic waste comes from, and who receives the bulk of these flows.

The U.S. could fill up 68,000 shipping containers with its annual plastic waste exports. Put another way, 6,000 blue whales would weigh less than this nearly one million tons of waste exports.

Given the amount of plastic which ends up in our oceans, this comparison is just cause for alarm. But one interesting thing to note is that overall totals have halved since 2016:

Over recent years, the trajectory of plastic exports has mimicked the movement of plastic waste into China, including the steep plummet that starts in 2018. After being the world’s dumping ground for decades, China enacted a new policy, dubbed “National Sword”, to ban foreign recyclables. The ban, which includes plastics, has left the world scrambling to find other outlets for its waste.

In response, top exporters quickly turned to other countries in Southeast Asia, such as Malaysia, Vietnam, and Thailand.

That didn’t completely stop plastic waste from seeping through, though. China previously imported 600,000 tons of plastic monthly, but since the policy only restricted 24 types of solid waste, 30,000 tons per month still entered the country post-ban, primarily from these countries:

Many countries bearing the load of the world’s garbage are planning to follow in China’s footsteps and issue embargoes of their own. What does that mean for the future?

Recycle and Reuse; But Above All, Reduce

The immense amounts of plastic waste sent overseas include recycled and recyclable materials. That’s because most countries don’t have the means to manage their recycling properly, contrary to public belief. What is being done to mitigate waste in the future?

Visualizing the Depth of the Great Lakes

The five Great Lakes account for 21% of the world’s total freshwater. This bathymetric visualization dives into just how deep they are. 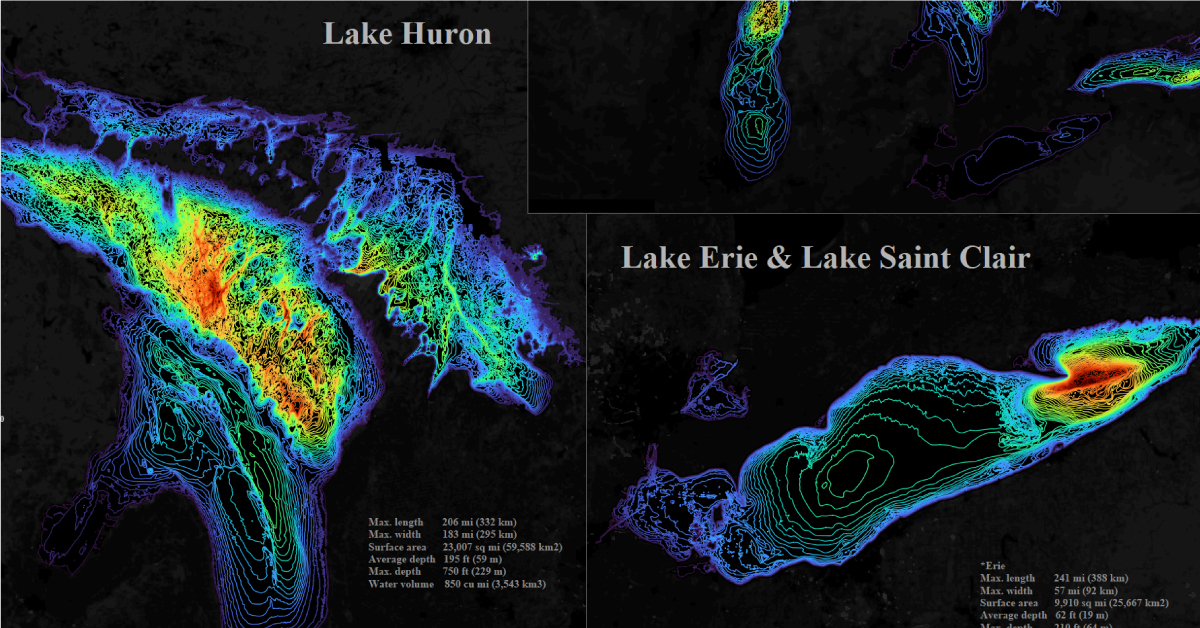 Visualized: The Depth of The Great Lakes

Click here to view the interactive version of the visualization on Tableau.

As the seasons change, it’s natural to want to enjoy the outdoors to the fullest. The Great Lakes, a distinct geographical region sandwiched between the U.S. and Canada, provides immense opportunity for millions of tourists to do just that every year.

This bathymetric visualization, created by Alex Varlamov, helps put the sheer size and depth of all five of the Great Lakes into perspective.

Bathymetry is the study of the underwater depth of ocean or lake floors, a geographical science that falls under the wider umbrella of hydrography.

In essence, it is the underwater equivalent of topography. Contour lines help to represent and study the physical features of bodies of water, from oceans to lakes.

Most bathymetric studies are conducted via sonar systems, transmitting pulses that ‘ping’ off the ocean and lake floor, uncovering what lies below.

The Depth of the Great Lakes, Compared

High on the list of the world’s largest lakes, the five Great Lakes altogether account for over 244,700 km² (94,250 mi²) in total surface area. That’s bigger than the entire United Kingdom.

Lake Erie is by far the shallowest of the lakes, with an average depth of just 19 meters (62 ft). That means on average, Lake Superior is about eight times deeper.

With that in mind, one drawback of the visualization is that it doesn’t provide an accurate view of how deep these lakes are in relation to one another.

For that, check out this additional visualization also created by Alex Varlamov, which is scaled to the same 20 meter step—in this view, Lake Erie practically disappears.

More than Meets the Eye

The Great Lakes are not only notable for their form, but also their function—they’re a crucial waterway contributing to the economy of the area, supporting over 50 million jobs and contributing $6 trillion to gross domestic product (GDP).

Together, the five Great Lakes feed into the Atlantic Ocean—and when we expand the scope to compare these lakes to vast oceans, trenches, and drill holes, the depth of the Great Lakes barely scratches the surface.

Bitcoin mining requires significant amounts of energy, but what does this consumption look like when compared to countries and companies? Cryptocurrencies have been some of the most talked-about assets in recent months, with bitcoin and ether prices reaching record highs. These gains were driven by a flurry of announcements, including increased adoption by businesses and institutions.

Lesser known, however, is just how much electricity is required to power the Bitcoin network. To put this into perspective, we’ve used data from the University of Cambridge’s Bitcoin Electricity Consumption Index (CBECI) to compare Bitcoin’s power consumption with a variety of countries and companies.

Why Does Bitcoin Mining Require So Much Power?

When people mine bitcoins, what they’re really doing is updating the ledger of Bitcoin transactions, also known as the blockchain. This requires them to solve numerical puzzles which have a 64-digit hexadecimal solution known as a hash.

Miners may be rewarded with bitcoins, but only if they arrive at the solution before others. It is for this reason that Bitcoin mining facilities—warehouses filled with computers—have been popping up around the world.

These facilities enable miners to scale up their hashrate, also known as the number of hashes produced each second. A higher hashrate requires greater amounts of electricity, and in some cases can even overload local infrastructure.

On March 18, 2021, the annual power consumption of the Bitcoin network was estimated to be 129 terawatt-hours (TWh). Here’s how this number compares to a selection of countries, companies, and more.

If Bitcoin were a country, it would rank 29th out of a theoretical 196, narrowly exceeding Norway’s consumption of 124 TWh. When compared to larger countries like the U.S. (3,989 TWh) and China (6,543 TWh), the cryptocurrency’s energy consumption is relatively light.

For further comparison, the Bitcoin network consumes 1,708% more electricity than Google, but 39% less than all of the world’s data centers—together, these represent over 2 trillion gigabytes of storage.

Where Does This Energy Come From?

In a 2020 report by the University of Cambridge, researchers found that 76% of cryptominers rely on some degree of renewable energy to power their operations. There’s still room for improvement, though, as renewables account for just 39% of cryptomining’s total energy consumption.

Here’s how the share of cryptominers that use each energy type vary across four global regions.

Source: University of Cambridge
Editor’s note: Numbers in each column are not meant to add to 100%

Hydroelectric energy is the most common source globally, and it gets used by at least 60% of cryptominers across all four regions. Other types of clean energy such as wind and solar appear to be less popular.

Coal energy plays a significant role in the Asia-Pacific region, and was the only source to match hydroelectricity in terms of usage. This can be largely attributed to China, which is currently the world’s largest consumer of coal.

Researchers from the University of Cambridge noted that they weren’t surprised by these findings, as the Chinese government’s strategy to ensure energy self-sufficiency has led to an oversupply of both hydroelectric and coal power plants.

Towards a Greener Crypto Future

As cryptocurrencies move further into the mainstream, it’s likely that governments and other regulators will turn their attention to the industry’s carbon footprint. This isn’t necessarily a bad thing, however.

“It allows for a faster payback on solar projects or wind projects… because they would [otherwise] produce too much energy for the grid in that area”
– Mike Colyer, CEO, Foundry

This type of thinking appears to be taking hold in China as well. In April 2020, Ya’an, a city located in China’s Sichuan province, issued a public guidance encouraging blockchain firms to take advantage of its excess hydroelectricity.