Interactive: How Do Americans Differ by Age?

The human experience changes dramatically over the course of a lifetime.

While we each intrinsically know that our days as teenagers will be vastly different from those as senior citizens, it is interesting to see how this looks from a 10,000-foot perspective.

Using demographic data on the American populace, we can spot key differences between age groups, including some aspects that make each generation of Americans unique.

The U.S. Population, by Age

Today’s interactive data visualization comes to us from Overflow Data, and it charts out the entire U.S. population by age group.

The graphic allows you to sort demographics based on data pertaining to specific topics—such as whether people own or rent their house—to see how age affects answers to these different questions. The interactive visualization also allows you to filter results by geographic region, sex, marital status, or employment status.

Data here comes from the 2017 Public Use Microdata Sample (PUMS) via the American Community Survey, which is published by the U.S. Census Bureau.

Let’s dive into how American differ by age, by looking at some specific charts:

This is a simple one to start with, but it makes it easy to see how the data works. In the below chart, it’s evident that most younger and older Americans are not in the labor force, while the majority of working age Americans are employed or seeking work (unemployed). Own or Rent, by Age

How about looking at whether Americans own or rent, or even if they live in a group quarters? The below chart is sorted by percentile, and it shows the percentage of individuals by race according to their age group. As the population skews younger, so does its racial diversity. The below chart is sorted by percentile, and it shows the marital status (married, divorced, etc.) of different age groups. For more on how Americans differ by age, learn about how different generations approach the workplace, as well as how they think about investing.

Ranking the World’s Most Populous Cities, Over 500 Years of History

We’ve come a long way since Pangea. This short video examines the area, population, and GDP of our continents as a share of the world’s total. We’ve come quite a long way since the time of Pangea. Today, the world’s continents are home to over 7.8 billion people, and each one is unique in its own way.

This video from the data visualization tool Vizzu compares the surface area, population, and GDP of the continents—all in terms of their contribution to the world’s total. Let’s dive further into the results of each category.

Click through to source to see the country breakdowns. Antarctica has been excluded from these calculations.

When it comes to sheer land mass, Asia emerges on top with over one-third of the global surface area. On that front, it certainly has a little help from the combined forces of Russia and China, even as the former overlaps Eastern Europe as well.

Africa comes in second, but doesn’t lag behind by much. A stone’s throw from Europe, Algeria is the largest country on the continent—and the 10th largest in the world.

Failing to grasp the true size of Africa is a common mental mistake, as many maps systematically underestimate its scale. The continent could easily fit the entirety of China, India, the U.S., and multiple European countries within its borders.

Another way to look at things is in terms of the number of inhabitants in each region. Asia is once again on top, with almost two-thirds of the world squeezed onto the continent.

Asia’s lead in population is impressive, but it’s a margin that is unlikely to last forever.

By the year 2100—new estimates show the populations India and China could start to dip. Meanwhile Nigeria, which is already Africa’s most populous country with near 196 million people, could potentially quadruple in numbers in the same time frame.

In this metric, Europe also rises to third place. This is thanks again to the approximately 146 million people within Russia. However, if only the countries located completely within the continent are considered, Germany’s population of nearly 84 million would win out.

Finally, economic output—measured in terms of Gross Domestic Product (GDP)—is the most common way to assess the relative prosperity of countries and continents.

At this, the U.S. dominates with $21.4T according to the World Bank, though it swaps places with China which boasts $23.5T when adjusted for purchasing power parity (PPP).

Source: World Bank for both GDP Nominal and PPP, 2019.

Global wealth share drops sharply between Europe and South America, though it’s worth noting that rising inequality is also hidden under the surface within many high-income regions.

In terms of overall GDP, the Asian continent makes up the lion’s share. Asia is also home to many of the world’s emerging markets—which means there may be an even more pronounced shift of wealth towards the East in coming decades.

New estimates show that world population may begin shrinking in coming years. We visualize this and how country populations will change by 2100. 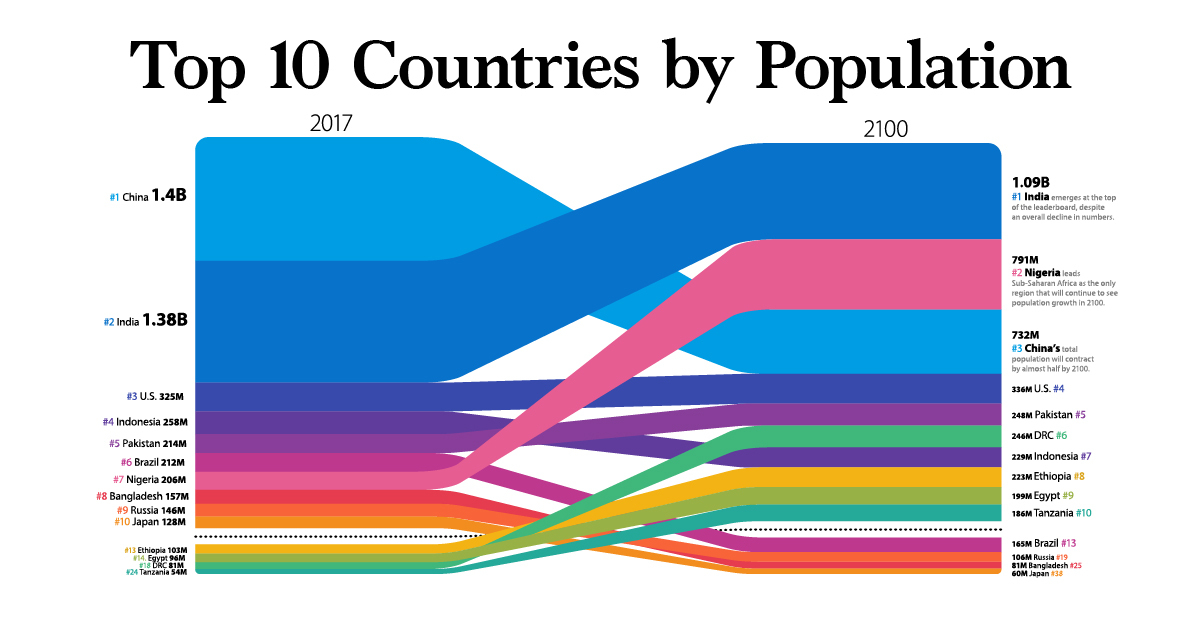 In 2015, the United Nations predicted that the global population could surpass 11 billion by the end of the century.

Last year, the UN revised these estimates, but the numbers it came up with were still well above 10 billion. These regular projections from the UN have been the status quo—until now.

Plenty of signs have pointed to there being a population plateau, but recent research from the Institute for Health Metrics and Evaluation (IHME), published in The Lancet, suggests that the number of people on this planet may actually start to shrink well before the year 2100.

Here’s a closer look at these complex projections.

According to the UN, the world population is set to steadily rise over the years:

In contrast, IHME paints a different picture. It projects the population to actually peak at 9.7 billion in 2064. Following this trajectory, there could be 8.8 billion people in 2100, approximately 2 billion fewer than previously thought.

A shifting age structure is also a key aspect of this transition. By 2100, over a quarter of the world or nearly 2.37 billion will be aged 65 years and above.

The Most Populous Countries in 2100

Amid all these demographic sea changes, which countries will come out on top?

Despite an overall decline in numbers to 1.09 billion people in 2100, India moves up from second to first place on the population leaderboard.

The populations of both India and China will begin to contract after the mid-century—and it’s predicted that China’s total population will drop by almost half to 732 million by 2100.

Led by Nigeria, Sub-Saharan Africa is the only region that will continue to see growth by century’s end. In fact, four of the top 10 countries in the world in terms of population count will be located in Sub-Saharan Africa.

One final thing to consider is how population density may look in 2100, with many more people clustered in the same areas. For example, Nigeria is dealing with a land area nearly 11 times smaller than the U.S.—but it will have more than double the population.

Regardless of how the future population count shakes out, it’s clear that these heavyweight countries will undergo significant transformation in the coming decades.