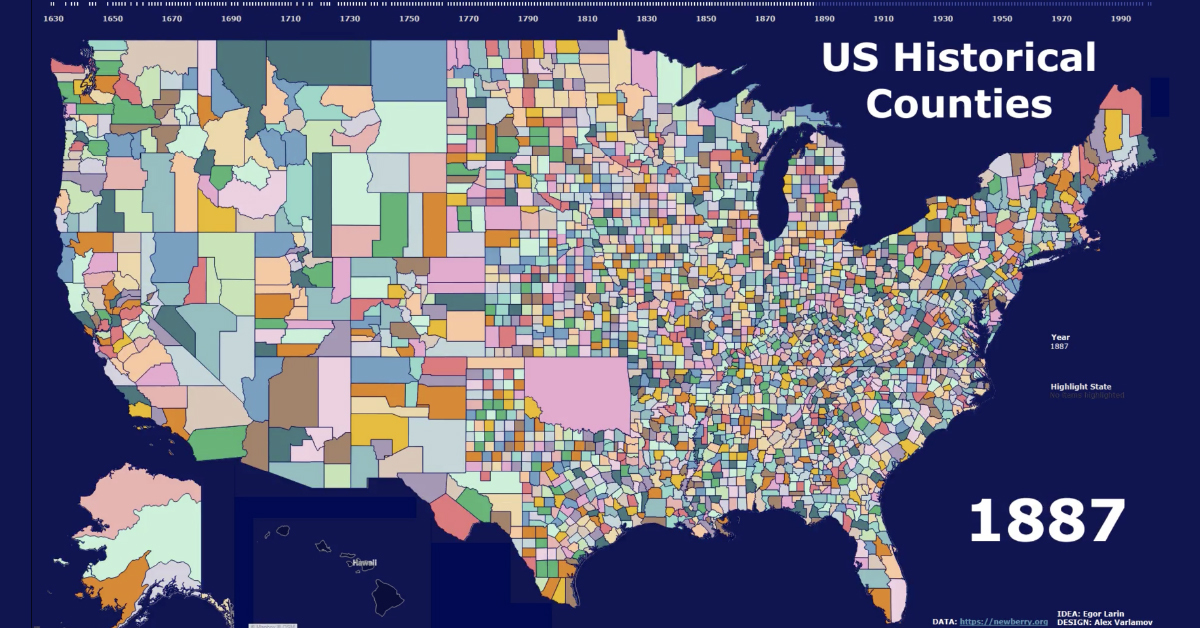 Did you know that there are 3,142 different counties in the U.S. today?

Going as far back as the 1600s, English settlers arriving in the New World envisioned counties as a means of accessible government—a county seat was meant to be within a day’s buggy ride for every citizen.

While the role of counties in local government has remained significant in modern times, their boundaries have changed drastically over the years.

This animated map by Alexander Varlamov visualizes the history of U.S. county borders, and how these jurisdictions have evolved over time.

Before diving in, it’s important to note a few county-equivalents that function similarly but go by different names:

Over 300 Years of Growth

The number of counties in the U.S. has increased dramatically since the early days of American history. Here’s a look at their growth since 1790:

The first county was established in 1634, over 100 years before the first Census was taken (and long before America gained independence). It was created in James City, Virginia—an interesting location, considering Virginia now has the highest concentration of independent cities.

Why does Virginia have so many independent cities? The state’s separation of counties and cities dates back to the early 1700s. With a rural population and low productivity, it was difficult to establish town centers. After several attempts, the General Assembly gave up. Independent cities were established instead.

Counties as a political organization have been around for hundreds of years, but some individual counties haven’t lasted long.

For instance, Bullfrog County in Nevada was established in 1987 and dissolved just two years later. During its brief existence, it had no population and no infrastructure—and its primary purpose was simply to prevent Yucca Mountain from becoming a nuclear waste dump.

While Bullfrog County has since been dissolved, the controversy around the nuclear waste site is ongoing as of 2020.

The latest official county, Broomfield Country, was established in Colorado in 2001.

Although it’s been decades since the last county was created, there have been continual boundary changes and status updates—sometimes for political reasons. For instance, the Supreme Court recently ruled that half of Oklahoma is within a Native American reservation. While this doesn’t necessarily change ownership, it does affect jurisdiction and county authority.

Though the lines on the map are more or less static now, the invisible lines of county jurisdiction will continue to change and evolve over time.

From Vatican City to Fiji, take a closer look at the world’s 100 smallest countries and their spheres of influence. National borders may be mere human constructs, but they are powerful ones.

Russia, Canada, the U.S., and so on—it’s easy to focus on the countries with the largest landmasses and seemingly endless borders. Their sheer size makes them hard to ignore, and their natural resources are often vast.

But with the above graphic from TitleMax, we can focus on the power of small.

Although several of the national borders shown above may be contested, the graphic gives us a clear overview of the globe’s smallest nations.

The Power of Small

The Vatican—the smallest country on Earth at 0.19 square miles—is renowned for its leader and main inhabitant, the Pope. As leader of the Catholic Church, the pontiff and his papal staff make up a sizable part of the country’s tiny population of 825. Most of the Church’s 219 Cardinals, its leading dignitaries, live in their respective dioceses.

With more than 1.2 billion Roman Catholics in the world, the Vatican’s sphere of influence is of course far larger than its small physical size. Although the walls of the Vatican are situated inside the city of Rome, Italy, its centuries-old influence spans continents.

Nearly 40% of Roman Catholics live in the Americas, while the fastest-growing Catholic population can be found in Africa—home to more than 17% of the world’s Catholics.

Where the Vatican’s power lies in religion, plenty of spending power is held by the tiny country of Monaco, the second smallest country on Earth.

Situated along the French Riviera, Monaco is surrounded entirely by France—but it also sits fewer than 10 miles from the Italian border.

At 0.78 square miles, Monaco could be compared to the size of a large farm in the U.S. Midwest. Despite its small size, Monaco has a GDP of nearly US$7.2 billion, and boasts over 12,000 millionaires living within one square mile.

Along with Luxembourg and Liechtenstein—both of which are included in the smallest countries list—Monaco is one of the only countries globally with a GDP per capita higher than $100,000.

Switzerland and the Netherlands, both found in this graphic at ranks 63 and 64, also hold large shares of the global economy given their size. These two nations rank 20th and 17th in the world in economic output, respectively.

Similarly, Singapore is the 20th smallest country on the planet, but it ranks in the top 10 in terms of GDP per capita ($65,233) and sits in 34th place globally in terms of nominal GDP.

To give us a better idea of just how small the tiniest countries are, let’s take a look at some simple size comparisons:

“Small,” of course, is a qualitative factor. It depends on your vantage point.

As of September 2020, there are 195 countries on Earth. Although this graphic shows the smallest countries in the world, it is worth noting that a list of the world’s 100 largest countries would also include some of the same countries on this list, including North Korea, Nicaragua, and Greece.

Is It A Small World Afterall?

Viewed from space, there are no borders on our tiny blue dot. But from ground level, we know how much power national borders hold.

Although globalization may make our world feel smaller, our nations significantly impact our lives, societally and economically.

And, as this chart shows, power comes in all sizes.

We visualize how far popular EV models will take you on real-world routes between major cities, and which are the most cost effective. 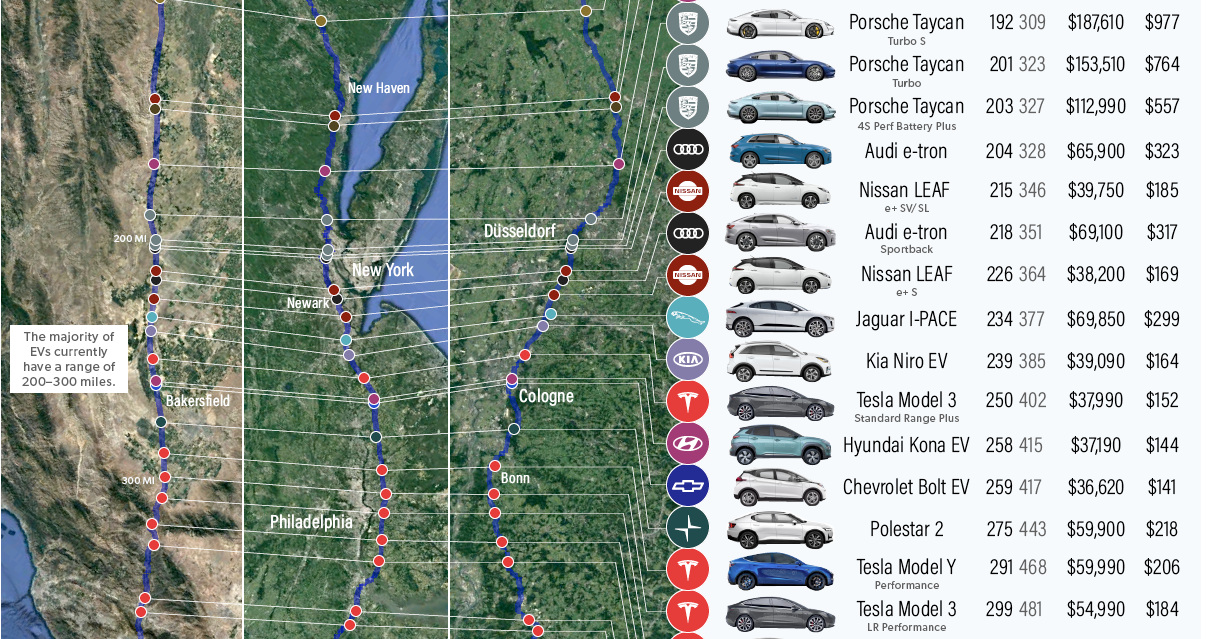 The Range of EVs on Major Highway Routes

Between growing concerns around climate change, new commuting behaviors due to COVID-19, and imminent policy changes, the global transition to electric vehicles (EVs) is well under way.

By the year 2040, sales of electric vehicles are projected to account for 58% of new car sales, up from just 2.7% currently.

But switching from a gasoline car to an electric one is not seamless. With charging and range capacities to consider, and the supporting infrastructure still being slowly rolled out in many parts of the world, understanding the realities of EV transportation is vital.

Above, we highlight 2020 all-electric vehicle range on well-recognized routes, from California’s I-5 in the U.S. to the A2 autobahn in Germany. The data on estimated ranges and costs are drawn from the U.S. EPA as well as directly from manufacturer websites.

The EV Breakdown: Tesla is King of Range

For many consumers, the most important aspect of an electric vehicle is how far they can travel on a single charge.

Whether it’s for long commutes or out-of-city trips, vehicles must meet a minimum threshold to be considered practical for many households. As the table below shows, Tesla’s well-known EVs are far-and-away the best option for long range drivers.

In an industry where innovation and efficiency are vital, Tesla’s first-mover advantage is evident. From the more affordable Model 3 to the more luxurious Model S, the top eight EVs with the longest ranges are all Tesla vehicles.

At 402 miles (647 km), the range of the number one vehicle (the Tesla Model S Long Range Plus) got 127 miles more per charge than the top non-Tesla vehicle, the Polestar 2—an EV made by Volvo’s standalone performance brand.

Though Tesla leads on overall range and battery capacity, accounting for the price of each vehicle shows that cost-efficiency is far more competitive among brands.

By dividing the retail price by the maximum range of each vehicle, we can paint a clearer picture of efficiency. Leading the pack is the Chevrolet Bolt, which had a cost of $141.39/mile of range in 2020 while still placing in the top 10 for range with 259 miles (417 km).

Just behind in second place was the Hyundai Kona electric at $144.15/mile of range, followed by the Tesla Model 3—the most efficient of the automaker’s current lineup. Rounding out the top 10 are the Nissan LEAF and Tesla Model S, but the difference from number one to number ten was minimal, at just over $45/mile.

Higher Ranges and Lower Costs on the Horizon

The most important thing to consider, however, is that the EV industry is entering a critical stage.

On one hand, the push for electrification and innovation in EVs has driven battery capacity higher and costs significantly lower. As batteries account for the bulk of weight, cost, and performance in EVs, those dividends will pay out in longer ranges and greater efficiencies with newer models.

Equally important is the strengthening global push for electric vehicle adoption. In countries like Norway, EVs are already among the best selling cars on the market, while adoption rates in China and the U.S. are steadily climbing. This is also being impacted by policy decisions, such as California’s recent announcement that it would be banning the sale of gasoline cars by 2035.

Meanwhile, the only thing outpacing the growing network of Tesla superchargers is the company’s rising stock price. Not content to sit on the sidelines, competing automakers are rapidly trying to catch up. Nissan’s LEAF is just behind the Tesla Model 3 as the world’s second-best-selling EV, and Audi recently rolled out a supercharger network that can charge its cars from 0% to 80% at a faster rate than Tesla.

As the tidal wave of electric vehicle demand and adoption continues to pick up steam, consumers can expect increasing innovation to drive up ranges, decrease costs, and open up options.

Correction: A previous version of this graphic showed a European route that was the incorrect distance.