The 6,000-Year History of Medical Cannabis

Since the early 20th century, the use of cannabis for any purpose fell out of favor by both regulators and Western culture at large.

In the United States, a wave of regulations made access to cannabis more difficult starting from the late 1900s, ultimately culminating in the Marihuana Tax Act of 1937, which effectively made cannabis use a federal offense. Meanwhile, prohibition in Canada lasted for 85 years until being lifted by recent developments.

Interestingly, however, this recent period of 20th century opposition is actually just a small speck in the wider 6,000-year timeline of cannabis. After all, the plant has been widely regarded for its therapeutic potential for many millennia by different cultures around the world.

Today’s infographic comes to us from MedReleaf, and it focuses on the medical uses of cannabis discovered by many cultures over time. With uses dating back to Ancient empires such as Rome, Egypt, and China, it helps to put into perspective recent legal and cultural developments regarding cannabis on a broader historical scale.

4000 BC: Pan-p’o village
Cannabis was regarded among “five grains” in China, and was farmed as a major food crop.

2737 BC: Pen Ts’ao Ching
Earliest record of cannabis as a medicinal drug. At this time, Emperor Shen-Nung recognized its treatment properties for over 100 ailments such as gout, rheumatism, and malaria.

2000-1000 BC: Atharva Vedas
Cannabis was described as a “source of happiness”, “joy-giver”, and “bringer of freedom” in these Hindu religious texts. At this time, cannabis was smoked at daily devotional services and religious rituals.

2000-1000 BC: Ayurvedic Medicine
Open religious use of cannabis allowed for exploration of medical benefits. During this period, it was used to treat a variety of ailments such as epilepsy, rabies, anxiety, and bronchitis.

1213 BC: Ramesses II
Cannabis pollen has been recovered from the mummy of Ramesses II, the Egyptian pharaoh who was mummified after his death in 1213 BC.

900 BC: Assyrians
Employed the psychotropic effects of cannabis for recreational and medical purposes.

450-200 BC: Greco-Roman use
Physician Dioscorides prescribed cannabis for toothaches and earaches. Greek doctor Claudius Galen noted it was widely consumed throughout the empire. Women of the Roman elite also used cannabis to alleviate labor pains.

207 AD: Hua T’o
First recorded physician to describe cannabis as an analgesic. He used a mixture of cannabis and wine to anesthetize patients before surgery.

1000 AD: Treats Epilepsy
Arabic scholars al-Mayusi and al-Badri regard cannabis as an effective treatment for epilepsy.

1025 AD: Avicenna
The medieval Persian medical writer publishes “Avicenna’s Canon of Medicine”, stating that cannabis is an effective treatment for gout, edema, infectious wounds, and severe headaches. His work was widely studied from the 13th to 19th centuries, having a lasting impact on Western medicine.

1300 AD: Arab traders
Arab traders bring cannabis from India to Eastern Africa, where it spreads inland. It is used to treat malaria, asthma, fever, and dysentery.

1500 AD: Spanish Conquest
The Spanish brought cannabis to the Americas, where it was used for more practical purposes like rope or clothes. However, years later, it would be used as a psychoactive and medicinal drug.

1798: Napoleon
Napoleon brought cannabis back to France from Egypt, and it was investigated for its pain relieving and sedative qualities. At this time, cannabis would be used to treat tumors, cough, and jaundice.

1900: Medical Cannabis
Medical cannabis was used to treat nausea, rheumatism, and labor pain. At this point in time, it is available over-the-counter in medications such as “Piso’s cure” and “One day cough cure”.

1914: Harrison Act
Drug use was declared a crime in the U.S., under the Harrison Narcotics Tax Act in 1914.

1964: Discovery of THC
The molecular structure of THC, an active component of cannabis, was discovered and synthesized by Israeli chemist Dr. Raphael Mechoulam.

1970: Classified as Schedule 1 Drug
Cannabis became categorized as a Schedule 1 Drug in the U.S., which limited further research into the plant. It was listed as having “no accepted medical use”.

1988: CBD Receptors Discovered
The CBD1 and CBD2 cannabinoid receptors were discovered. Today, we know they are some of the most abundant neuroreceptors in the brain.

2000-2018: Medical cannabis legalization
Governments, such as those of Canada and various states, begin to legalize cannabis for medical purposes from licensed producers. Recreational legalization quickly starts to follow.

The Story of Cannabis: What Investors Need to Know This graphic provides an overview of 9 key developments in the cannabis industry that investors should be aware of going into 2021. 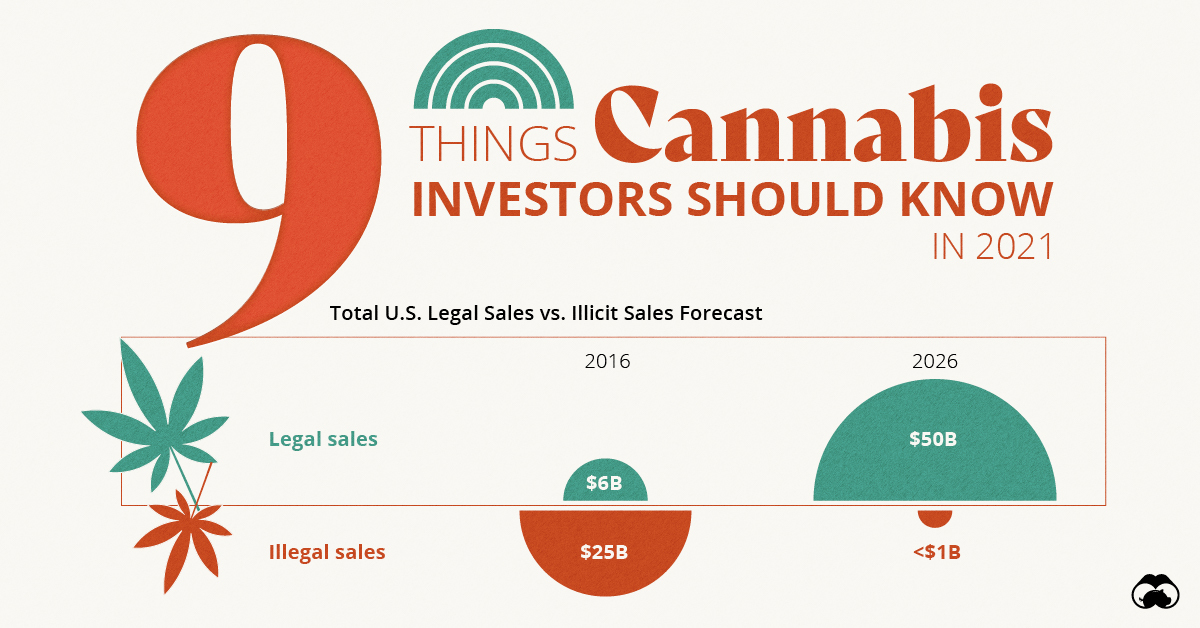 9 Things Cannabis Investors Should Know in 2021

Unlike dozens of other industries across the globe, cannabis experienced significant growth as a result of the COVID-19 pandemic.

In fact, with consumption for both medical and recreational products on the rise, 2020 was a record-breaking year for the industry. After years of investor uncertainty, analysts are predicting a continued bull market in 2021, with several new and exciting developments on the horizon.

1. Cannabis Stocks on the Rise

While asset prices took a dip during the initial stage of the COVID-19 outbreak in March, the cannabis sector recovered swiftly after reporting impressive numbers.

Even though cannabis investors have experienced some ups and downs in the last several years, 2021 looks more hopeful.

Cannabis has become an attractive option for people spending more time at home, both as a means of entertainment, and to reduce stress and anxiety associated with the pandemic.

As a result, cannabis sales are soaring. In Canada, monthly sales reached an all-time high of $270 million (CAD) in October 2020, a dramatic increase from $180 million just six months earlier.

For millions of U.S. citizens who live in states where the sale of cannabis is still restricted, the illicit market continues to be their only option.

But with loosening restrictions and legal cannabis becoming more widely available, legal sales are predicted to reach $50 billion by 2026 while illegal sales will plummet to less than $1 billion by the same year.

States where cannabis is legal are now paving the way for cannabis sales, with California expected to pull in over $6 billion by 2021 alone. If federal legalization comes to fruition over the next several years, the already booming U.S. market could see further growth.

5. All Eyes on the European Cannabis Market

The European cannabis market has been on investors’ radar for several years, and with good reason—it is one of the largest cannabis markets in the world.

Driven primarily by medicinal products, the market will be valued at over $39 billion by 2024, with countries like Germany—Europe’s largest economy—leading the way.

In late 2020, the market experienced its biggest breakthrough yet, with the European Union ruling that products containing CBD (one of the most active ingredients in cannabis) are no longer listed as narcotics.

Mexico is another market that is piquing the interest of investors and cannabis companies the world over. That’s because it could soon be the third country in the world to legalize recreational cannabis by court order.

With a total addressable market of $2 billion and the potential to support up to 75,000 jobs, these new regulations could change the dynamic of the global market for the better.

Given the flurry of product innovation in the market, consumption of cannabis is quickly changing.

Relatively new products such as edibles and oils are gaining traction, while consumption of flower appears to be declining. This could be due in part to oral products being perceived as a healthier alternative to smoking.

8. CBD Products are Moving into the Mainstream

Although CBD was once considered a niche product that could only be found in dispensaries, growing awareness of the benefits and safety of these products are causing companies operating in the consumer packaged goods industry to take notice.

The cannabis compound is a new addition to a wide range of products such as skincare, makeup, and supplements that can now be purchased almost anywhere—from ecommerce sites to local grocery stores.

9. The New Cannabinoids on the Block

Beyond CBD, scientists have discovered over 100 rare, or minor cannabinoids such as CBG and CBN, that could have even more significant benefits than their major cannabinoid counterparts.

These discoveries are not only attracting huge attention from the cannabis industry, but from the pharmaceutical industry as well.

Milestones in the Making

With all of these exciting developments coming to the fore, it’s safe to say 2021 could be one of the cannabis industry’s most transformative years to date.