Each year, thousands of ships travel across the globe, transporting everything from passengers to consumer goods like wheat and oil.

But just how busy are global maritime routes, and where are the world’s major shipping lanes? This map by Adam Symington paints a macro picture of the world’s maritime traffic by highlighting marine traffic density around the world.

It uses data from the International Monetary Fund (IMF) in partnership with The World Bank, as part of IMF’s World Seaborne Trade Monitoring System.

If you take a look at the map, you’ll spot some distinct areas where traffic is heavily concentrated.

These high-density areas are the world’s main shipping lanes. Syminton provided some zoomed-in visuals of these waterways in detail, so let’s dive in: 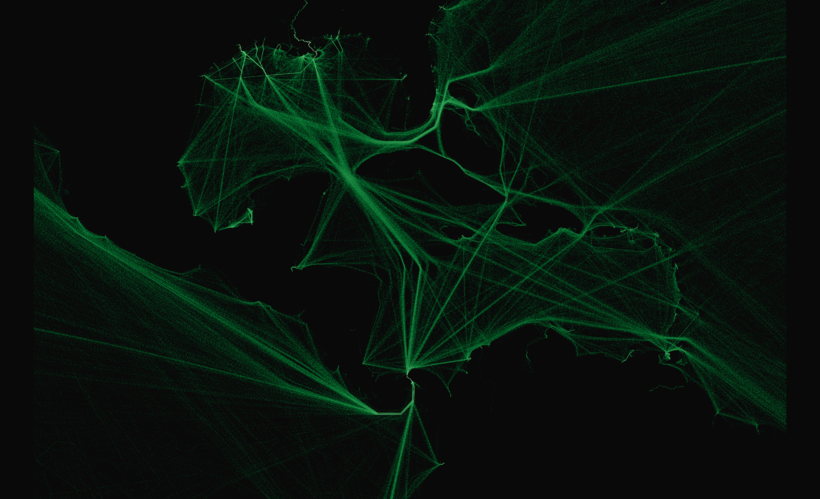 The Panama Canal is a man-made waterway that connects the Pacific and Atlantic Oceans. For ships traveling from the east to west coast of the U.S., this route avoids the far more treacherous Cape Horn at the tip of South America or the Bering Strait in the Arctic, and shaves off roughly 8,000 nautical miles—or 21 days off their journey.

In 2021, approximately 516.7 million tons of goods passed through the major waterway, according to Ricaurte Vasquez, the Panama Canal Authority’s administrator. This marine passage is the fastest connector between the Pacific and Indian oceans, winding through the Malay Peninsula and Sumatra. It’s a slender waterway—at its narrowest point, the canal is less than 1.9 miles wide. Approximately 70,000 ships pass through this strait each year. Connecting the North Sea with the Baltic Sea, the Danish Straits include three channels: the Oresund, the Great Belt and the Little Belt.

The Danish Straits are known to be a major passageway for Russian oil exports—which, despite sanctions and boycotts against Russian oil, have remained strong throughout 2022 so far. This 120-mile-long artificial waterway runs through Egypt and connects the Mediterranean Sea to the Red Sea, saving ships traveling between Asia and Europe a long passage around Africa. Over 20,600 vessels traveled through the canal in 2021.

Last year, the canal made headlines after a 1,312-foot-long container ship called the Ever Given got stuck in the canal for six days, causing a massive traffic jam and halting billions of dollars worth of traded goods. This 615-mile waterway connects the Persian Gulf and the Gulf of Oman and ultimately drains into the Arabian Sea. In 2020, the canal transported approximately 18 million barrels of oil every day. Located between England and France, the 350-mile-long English Channel links the North Sea to the Atlantic Ocean. Approximately 500 vessels travel through the channel each day, making it one of the world’s busiest shipping lanes.

Some of the major European rivers are also clearly visible in these visualizations, including the Thames in the UK, the Seine in France, and the Meuse (or Mass) that flows through Belgium and the Netherlands.

Though these maps show six years worth of marine traffic, it’s important to remember that many sectors were negatively impacted by the global pandemic, and maritime trade was no exception. In 2020, global maritime shipments dropped by 3.8% to 10.65 billion tons.

While the drop wasn’t as severe as expected, and output is projected to keep growing throughout 2022, certain areas are still feeling the effects of COVID-19-induced restrictions.

For instance, in March 2022, shipping volume at the port of Shanghai screeched to a halt due to strict lockdowns in Shanghai, triggered by a COVID-19 outbreak. Traffic was impacted for months, and while operations have rebounded, marine traffic in the area is still congested.