Measures like GDP are commonly used to understand the overall wealth and size of the economy. While looking at economic output on an annual basis is useful, there are other metrics to consider when evaluating the wealth of a nation.

This visual utilizes data from Credit Suisse’s annual Global Wealth Report to break down the latest estimates for household wealth by country.

Here’s how the world’s $463 trillion in household wealth is distributed:

As the table above demonstrates, global household wealth is far from being distributed equally.

Much of global wealth is concentrated in the biggest economies, with households in China and the U.S. combining to make up half of all personal wealth in the world. This differs slightly from using GDP as a measure, where the U.S. and China make up 24% and 19% of the world economy in nominal terms, respectively.

One of the biggest changes in recent years is the rise of wealth in China. A decade ago, China’s citizens were estimated to hold just 9% of the world’s wealth. That figure has now more than doubled, while median wealth in the country has skyrocketed from $3,111 to $26,752 between 2000 and 2021.

A Regional Look at Household Wealth

From a regional standpoint, wealth is equally split three ways, between North America, Asia, and everywhere else. In just one decade, Europe’s share of household wealth dropped by eight percentage points, which is due, in part, to the economic momentum of China.

Surprisingly, the regions of Africa, South America, Oceania, and the Middle East combine only for about 11% of the world’s total household wealth.

Data note: There is no straightforward way of estimating household wealth in various countries, so the report utilizes three main measures including: a country’s average level of wealth, the patterns of a country’s wealth holdings, and Forbes list of billionaires.

Ranked: The World’s Most Surveilled Cities

The world’s most surveilled cities contain hundreds of thousands of cameras. View this infographic to see the data in perspective. 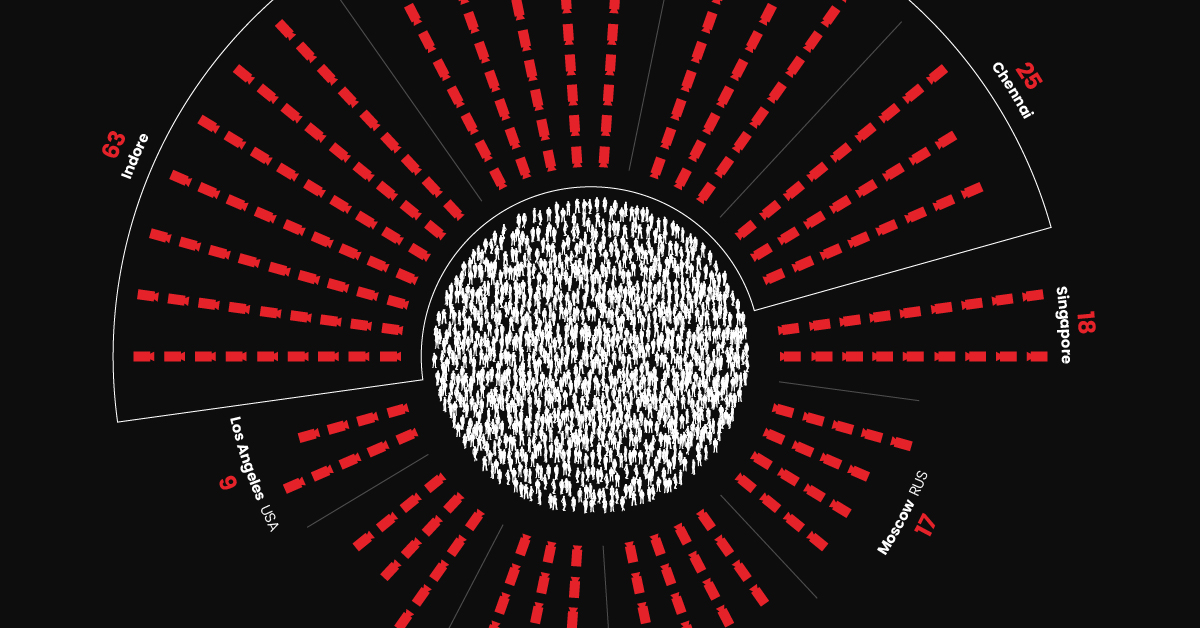 Ranked: The World’s Most Surveilled Cities

This may come as a surprise, but it wasn’t until 2007 that the global urban population overtook the rural population. At that time, the two groups were split nearly 50/50, with around 3.3 billion people apiece.

Today, the percentage of people living in urban areas has grown to over 55%, and is expected to reach 68% by 2050. Due to this trend, many of the world’s largest cities have become home to tens of millions of people.

In response to such incredible density, governments, businesses, and households have installed countless security cameras for various purposes including crime protection. To grasp the scale of this surveillance, we’ve taken data from a recent report by Comparitech to visualize the most surveilled cities in the world.

Excluding China for the time being, these are the world’s 10 most surveilled cities.

The top four cities all belong to India, which is the world’s second largest country by population. Surveillance cameras are playing a major role in the country’s efforts to reduce crimes against women.

Further down the list are cities from a variety of countries. One of these is Russia, which has expanded its use of surveillance cameras in recent years. Given the country’s track record of human rights violations, activists are worried that facial recognition technology could become a tool of oppression.

The only U.S. city on the list is Los Angeles, which contains some of the country’s wealthiest neighborhoods and municipalities. That includes Beverly Hills, which according to the Los Angeles Times, has over 2,000 cameras for its population of 32,500. That translates to about 62 cameras per 1,000 people, meaning that Beverly Hills would finish at #2 in the global ranking if it were listed as a separate entity.

IHS Markit estimates that as of 2021, there are over 1 billion surveillance cameras installed worldwide. The firm also believes that 54% of these cameras are located in China.

Because of limited transparency, it’s impossible to pinpoint how many cameras are actually in each Chinese city. However, if we assume that China has 540 million cameras and divide that amongst its population of 1.46 billion, we can reasonably say that there are 373 cameras per 1,000 people (figures rounded).

A limitation of this approach is that it assumes everyone in China lives in a city, which is far from reality. The most recent World Bank figures suggest that 37% of China’s population is rural, which equates to over 500 million people.

China’s expansive use of cameras and facial recognition technology has been widely documented in the media. These networks enable the country’s social credit program, which gives local governments an unprecedented amount of oversight over its citizens.

For example, China’s camera networks can be used to verify ATM withdrawals, permit access into homes, and even publicly shame people for minor offences like jaywalking.

This might sound like a dystopian nightmare to Western audiences, but according to Chinese citizens, it’s mostly a good thing. In a 2018 survey of 2,209 citizens, 80% of respondents approved of social credit systems.

If you’re interested in learning more about surveillance in Chinese cities, consider this video from The Economist, which explores the opportunities and dangers of comprehensive state control.