Over the last 50 years, fertility rates have dropped drastically around the world. In 1952, the average global family had five children—now, they have less than three.

This graphic by Pablo Alvarez uses tracked fertility rates from Our World in Data to show how rates have evolved (and largely fallen) over the past decades.

What’s The Difference Between Fertility Rates and Birth Rates?

Though both measures relate to population growth, a country’s birth rate and fertility rate are noticeably different:

As such, the fertility rate is a more specific measure, which as Britannica highlights, “allows for more efficient and beneficial planning and resource allocation.” Not including immigration, a given area needs an overall total fertility rate of 2.1 to keep a stable population.

For the last half-century, fertility rates have steadily decreased worldwide. Here’s a look at the average number of children per woman since 1952:

Why are women having fewer children? There are a number of theories and empirical research studies to help explain this decrease, but according to Dr. Max Roser, the founder of Our World in Data, most of the literature boils down to three main factors:

Research has found that higher education in women is correlated with lower fertility. For instance, in Iran in the 1950s, women had an average of three years of schooling and raised seven children on average.

But by 2010, when Iranian women had nine years of schooling on average, the average fertility rate in the country had dropped to 1.8.

This theory is further supported when you look at countries where women’s education is still relatively lagging. For instance, in 2010, women in Niger had 1.3 years of education on average, and an average of more than seven children—more than double the global average at that time.

Lower fertility rates, coupled with increased life expectancies around the world, are creating an aging population. Since 1950, the global median age has grown from 25 years to 33 years.

An older population comes with a number of economic risks, including rising healthcare costs and a smaller global workforce.

According to a report by the World Bank, the world’s working-age population peaked back in 2012. Since then, it’s been on the decline.

A smaller working population puts more pressure on those who are working to support those who are collecting pensions. This could ultimately lead to an economic slowdown if countries don’t prepare and alter their pension systems accordingly, to account for our aging population. 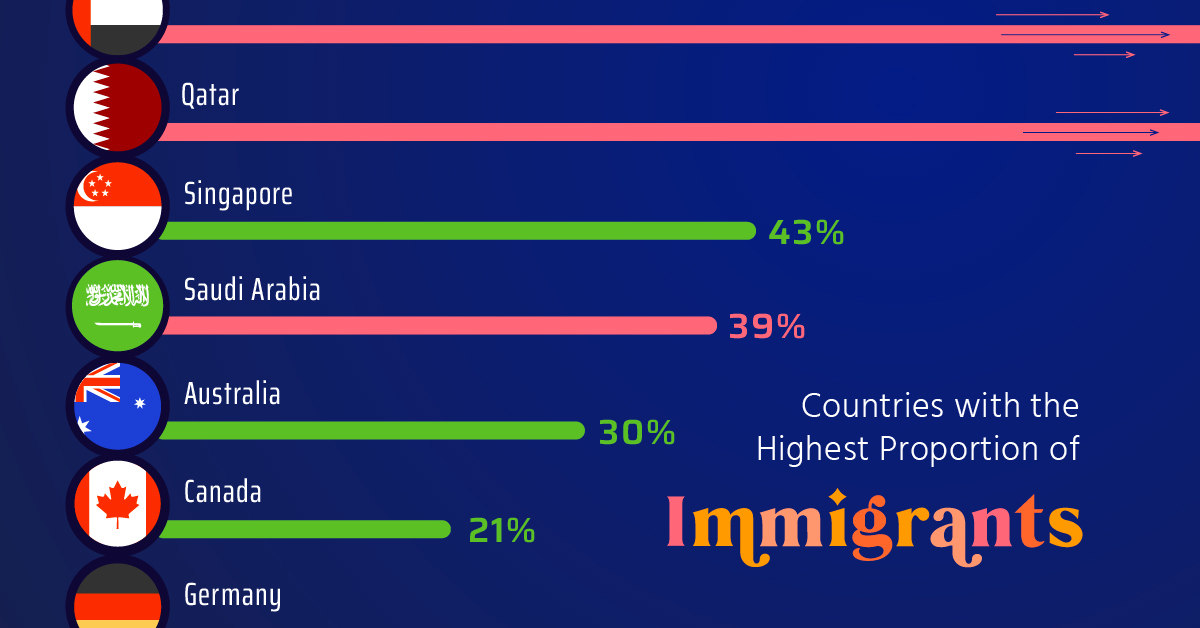 Which brands win the most with Gen Z compared to older generations? From TikTok to Capri Sun, this ranking looks at Gen Z’s favorite brands. 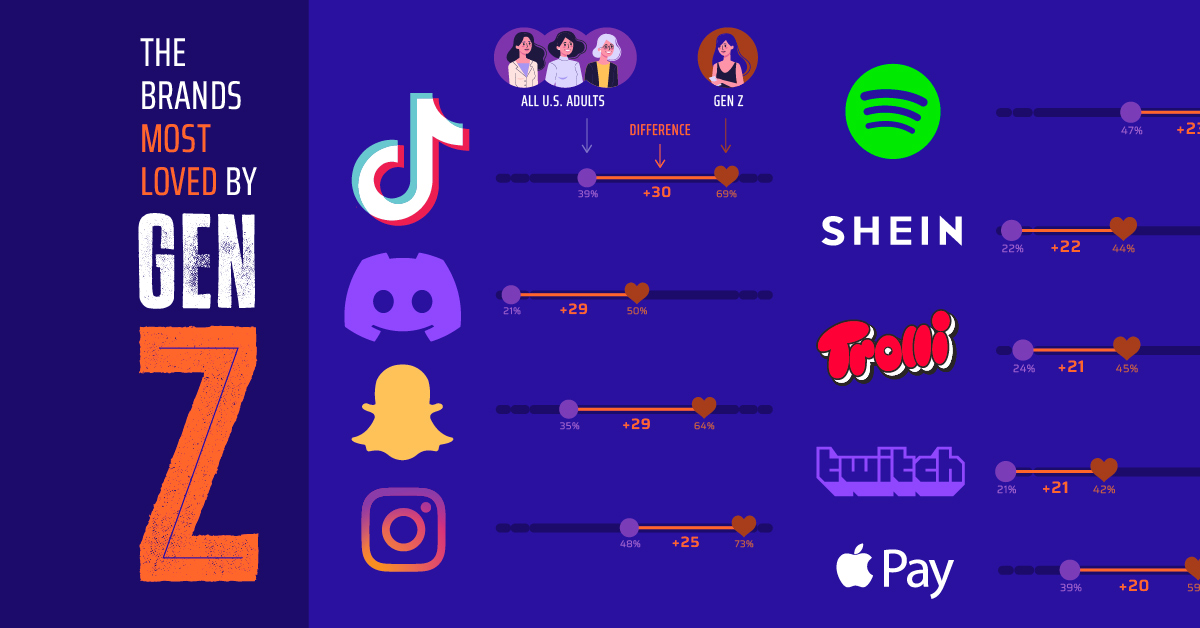 Generation Z’s favorite brands, in absolute terms, aren’t wildly different from preferences of other generations, with Walmart, Google, and Netflix ranking high. But when it comes to the brands that do the best with Gen Z compared to their elders, the list shakes up dramatically.

This ranking uses consumer preference data from Morning Consult to show which brands are favored considerably more by Gen Z when compared to the general public. A brand’s rank is determined by the difference in favorability between Gen Z’s survey responses and the average of all U.S. adult respondents.

Note: Gen Z is the generation born between 1997-2012. Favorability in this ranking is measured using the share of a generation who said they have a “very” or “somewhat” favorable opinion of said brand.

Compared to Millennials, Gen X, and Boomers, who may not care as much for these 20 brands, Gen Z—currently between 9-25 years old—loves them. Let’s dive in:

Note: Differences may not add up exactly due to rounding.

Unsurprisingly, TikTok takes the top spot. The app that is frequently used to poke fun at older generations and that in many ways is a reflection of Gen Z culture, is 30 points more favorable with the young generation than others.

Members of Gen Z are the first true “digital natives”—meaning they were raised in the age of digital technology. As a result, many of their favorite brands are either some kind of social media platform and/or digital service, like Apple Pay, Snapchat, or Spotify. In fact, eight of Gen Z’s top 10 favorites on the above list are digital brands.

Another distinguishing feature of consumers in this generation is that they’re more likely to care about brand ethics and sustainable consumption than other generations.

However, one brand among their top 20 that defies that sentiment is the Chinese clothing company, Shein. This fast fashion company’s model promotes a culture of mass clothing hauls and thus, clothing waste—making it far from environmentally conscious. Shein has also come under fire recently for violating labor laws in its Chinese production facilities. And yet 44% of Gen Zs have a good impression of the brand, and it particularly does well with Gen Z women.

Interestingly, members of Gen Z in the U.S. are also the first cohort to have strong awareness of Chinese brands more generally.

Two generations that are often lumped together, Gen Z and Millennials have some considerable differences when it comes to their favorite brands. Here’s a brief look at some of the brands that do better with Gen Z compared to Millennials specifically, using favorability difference:

Compared to their generational neighbors, one interesting standout is Crocs—the utilitarian, but highly-customizable foam clogs—which almost 60% of Gen Zs see as favorable compared to only 46% of Millennials.

While Gen Z differentiates itself from the older generations in many ways, a lot of the overall favorites still align with everyone else’s.

Removing the favorability difference score reveals that many of the most popular brands overall still win out, such as Netflix, Google, and Amazon.

Overall, the report found that it’s hard for brands to win with Gen Z. Across all brands that were scored, 33% of the general American public rated them as favorable, but for Gen Z respondents the number dropped to 27%.

In general, Gen Z tends to value conscious consumption and subsequently, brands that can meet those expectations. Digital services and products also do well with this generation that has never known a world without internet.

As more and more Gen Zers enter the labor market and grow their consumer power, they will be an important generation to watch.