All the Contents of the Universe, in One Graphic

Where does each river start, converge, and end? This series of maps traces river basins in each continent around the world. 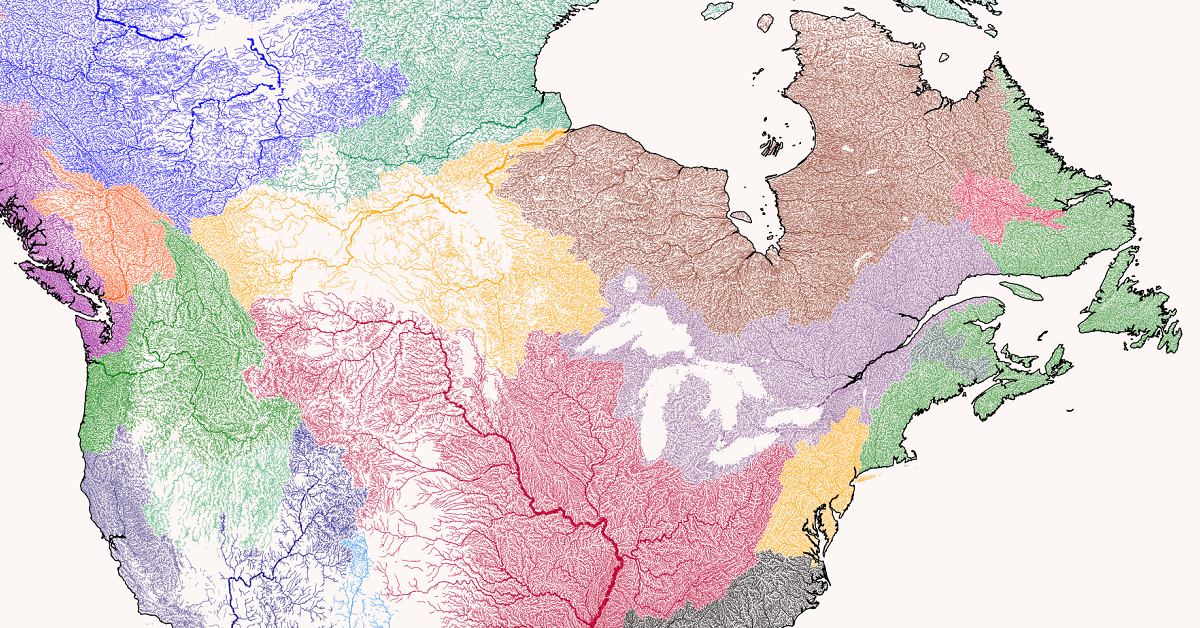 There are hundreds of rivers on Earth’s surface, moving freshwater from hills and mountains down to larger rivers, lakes, and oceans.

Thanks to the planet’s natural slopes and ridges, falling rain that isn’t absorbed by soil or evaporated also ends up in nearby rivers. This area—where all flowing surface water converges—is called a river basin, drainage basin, or watershed.

These maps by Adam Symington show the world’s many rivers and major river basins, using the HydroSHEDS database and broken down by continent. North and Central America have many different river basins, but a few major rivers stand out.

To the North, Canada’s Mackenzie River runs from British Columbia through the Northwest Territories and ending up at the Arctic Ocean.

Of course, the Mississippi River and the Missouri River which flows into it both stand out as well, draining water from much of the U.S. to the Gulf of Mexico.

A few rivers and basins also start in the U.S. and end up in Mexico, including the Rio Grande from Colorado to Tamaulipas. Further south in Central America and the Caribbean, most of the basins don’t have major rivers and empty into the nearby oceans. It’s well-known that the Amazon River is the largest river in the world by volume and the second largest by length.

Likewise, its reach and impact can be seen in these maps. The Amazon basin is the largest river basin in the world with an area of 6,300,000 km², covering just over one-third of the entire South American continent.

That is almost double the sizable Río de la Plata basin, the 5th largest river basin in the world, which includes the Uruguay River and the Paraná River and meets at the border between Uruguay and Argentina. Despite being the second smallest continent, Europe’s proximity to many different bodies of water and great variation of terrain in small areas gives it many different drainage basins.

But a few notable rivers stand out in Central and Eastern Europe. The Danube, a historically important trade route and once a frontier of the Roman Empire, originates in Germany and flows eastwards to the Black Sea, passing through 10 total countries.

The longest river in Europe, the Volga in Russia, is also the cornerstone of the continent’s largest river basin, draining into the Caspian Sea. Its tributaries include the Moskva which runs through Moscow in Western Russia before flowing eastwards. 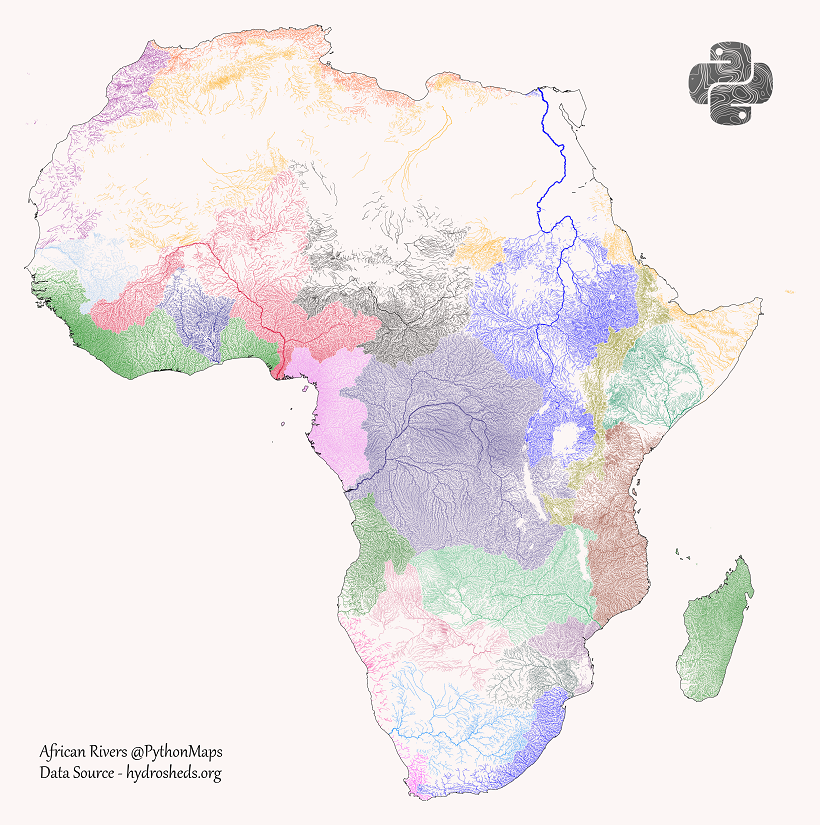 One of Africa’s most notable features is the lack of drainage in the Sahara Desert. But the continent also has a few clear major river systems, including two of the world’s largest rivers.

In the northeast, the Nile River is the world’s longest river, flowing from Lake Victoria and Lake Tana in the south to Egypt and the Mediterranean Sea. In total, its basin covers 11 countries.

And in West Africa, the Niger River creates a crescent shaped basin from the Guinea Highlands, northeast to Mali, then southwest through Niger and Nigeria. It ends in the massive (and massively important and populated) Niger Delta. 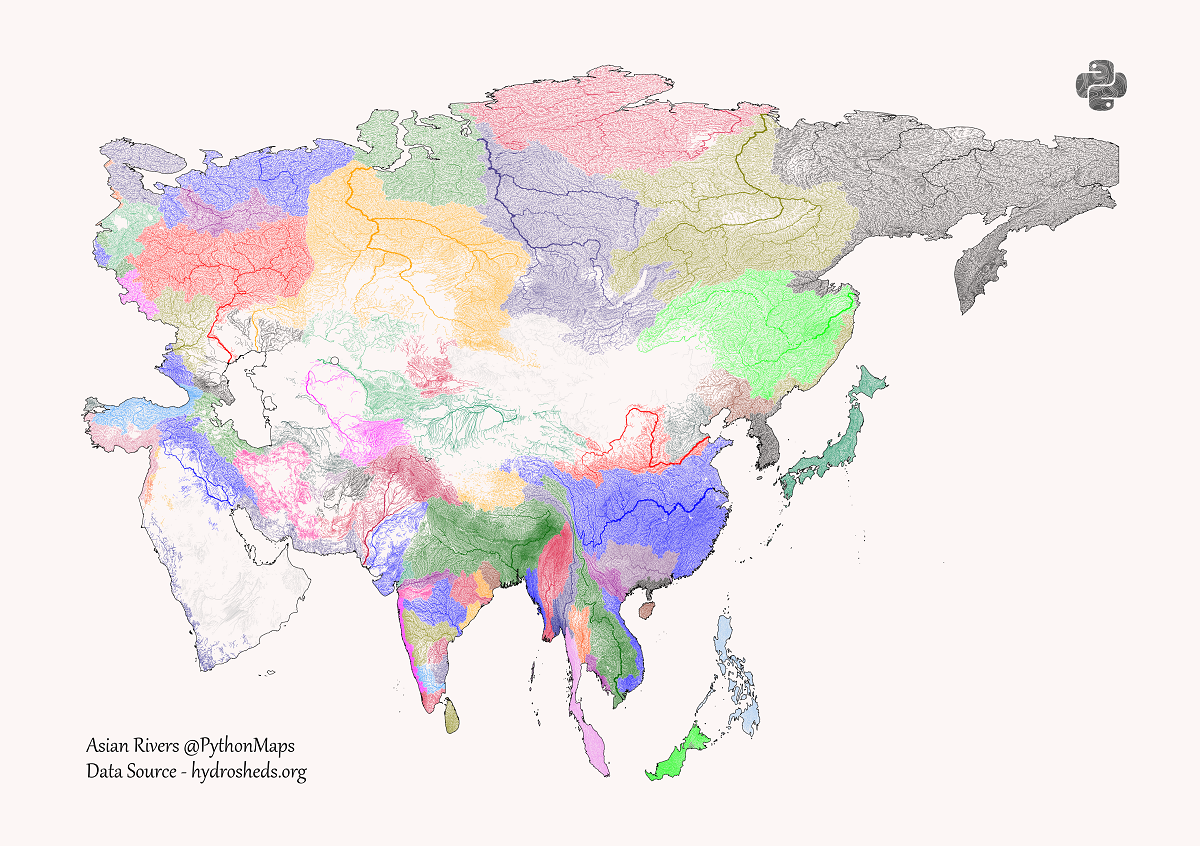 The world’s largest continent also has one of the largest varieties of river basins. From large sweeping basins in North Asia, to deserts in mountainous Central Asia and the Arabian Peninsula, to the multitude of basins draining into the Indian Ocean.

One of the major standouts is the Yangtze in China, the world’s third-longest river and largest plastic emitting river. Flowing from the Tibetan Plateau to the East China Sea, its wide basin covers one-fifth of China’s land area and one-third of its population.

The largest by volume is the Ganges–Brahmaputra–Meghna system, three major rivers running through India, China, Nepal, and Bangladesh. Their combined basin is home to around 400 million people, making it the most populous river basin in the world, ultimately draining into the Ganges Delta and ending up at the Bay of Bengal.

But the largest river basins in Asia are those of the “great Siberian rivers,” the Ob, the Yenisei, and the Lena, which all flow north to the Arctic Ocean. Comprised of many archipelagos and islands with a high ratio of coast along the Pacific Ocean, Oceania understandably has fewer long rivers and major river basins.

But there are still a few standouts, especially in the deserts of Australia. The Murray–Darling basin in the country’s southeast includes six of Australia’s seven longest rivers (including the namesake Murray), draining west to the Southern Ocean near Adelaide.

Towards the center of the country is the Lake Eyre basin, which covers 1,210,000 km² or just under one-sixth of the country’s landmass. This mostly flat and often dry basin drains into Lake Eyre, Australia’s largest lake, which only fills up with water about four times a century.

If you want to see higher resolution versions of these maps and do more river exploration for yourself, head to the PythonMaps Twitter. For full-size prints, check out the PythonMaps Etsy.