Infographic: Which Countries Have the Most Economic Complexity?

Every country has an economy that is unique.

In some places, such as the United States or Germany, economies are able to produce many different goods and services that get exported around the world. These countries tend to house world-class businesses in sectors like financials, technology, consumer goods, and healthcare, with companies that produce highly specialized goods like automobiles, software, or pharmaceutical products. Ultimately, these are innovative economies that can roll with the punches, creating growth even when prospects are dim.

In other places, this level of sophistication is just not there. Innovation and knowledge are stunted or non-existent for most industries, and these countries may focus exclusively on one or two goods to pay the bills. Venezuela’s reliance on oil is an obvious example of this, but there are even many Western countries that miss the mark here as well.

In 2009, a team at Harvard formalized a measure of economic complexity that compared nations based on the sophistication of their economies. Now known as the Economic Complexity Index (ECI), the exact measurement is complicated, but it essentially uses data on two main things to uncover the underlying level of economic complexity:

1. Economic Diversity
Measures how many different products a country can produce.

2. Economic Ubiquity
Measures how many countries are able to make those products.

Ranking the Most Complex Economies

Here are the most complex economies in order, along with the changing rankings over time:

Topping the list are the economies of Japan (1st), Switzerland (2nd), Germany (3rd), and South Korea (4th). The United States sits in 9th place, and Canada is further down at 33rd.

Australia, which relies heavily on commodities, ranks notably low for Western countries in 73rd place, where it is sandwiched between Kazakhstan and the Dominican Republic.

The most recent iteration of the index also highlighted some movers and shakers over the last 10 year period: In particular, the crisis in Venezuela has had an effect on economic complexity, eroding any sophistication that existed. 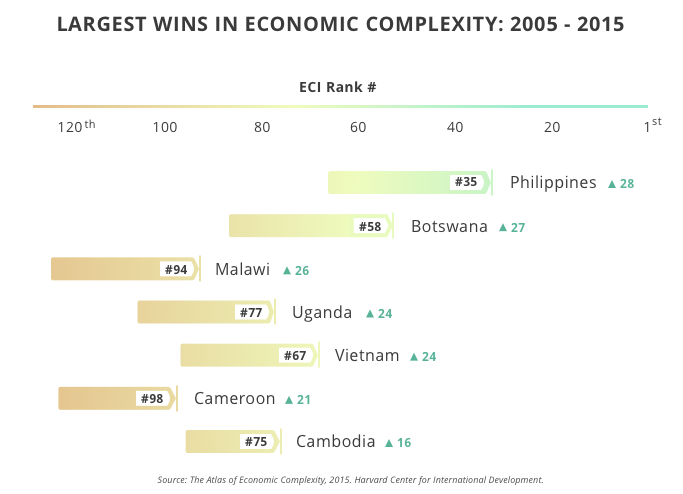 On the opposite side of the spectrum, the Philippines is the biggest mover upwards, ascending 28 spots.

Some African countries are also moving fast up the rankings: Botswana, Malawi, Uganda, and Cameroon each jumped over 20 spots.