Using the tax-to-GDP ratio, we compare the tax systems of 35 OECD countries. See which nations have the highest and lowest rates. 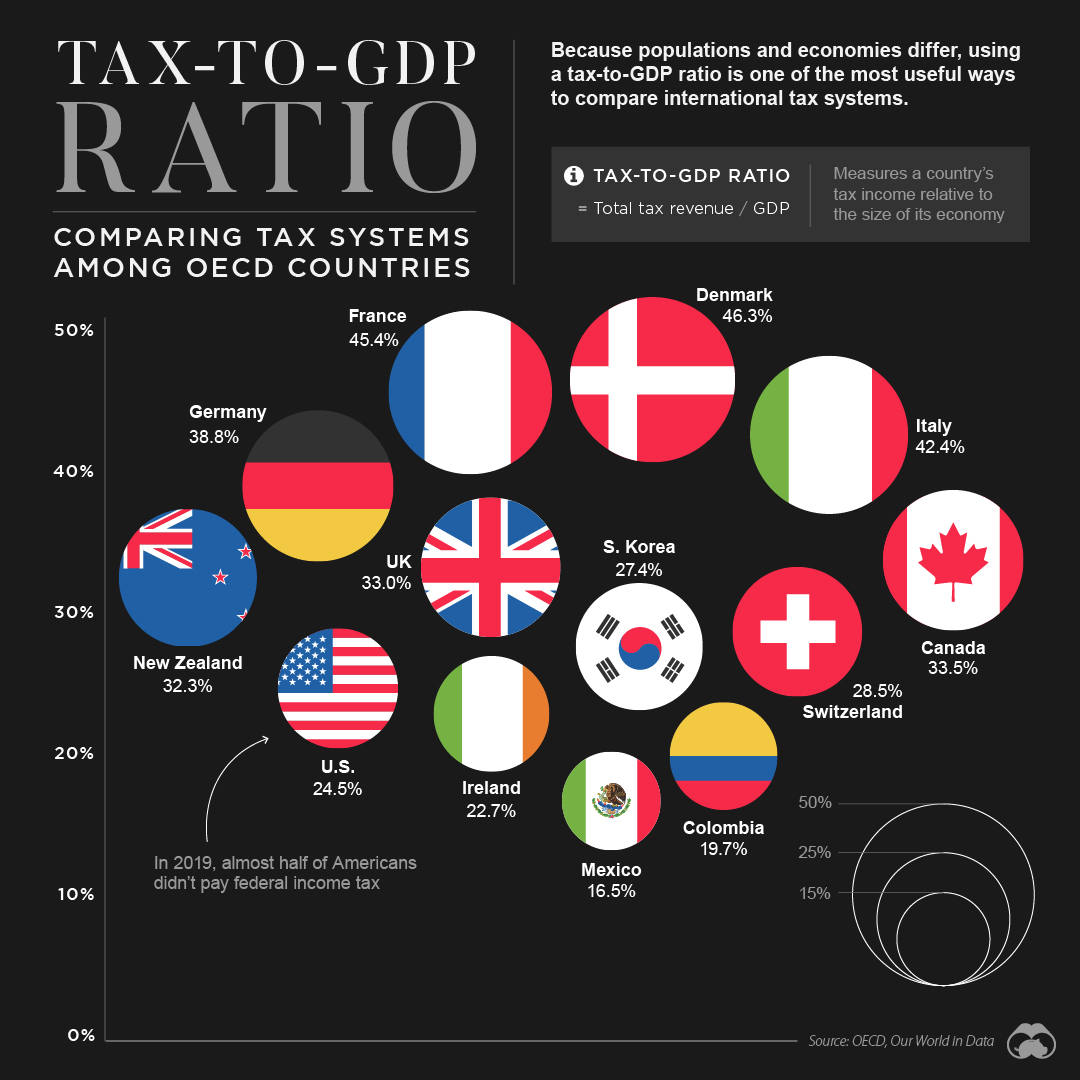 Taxes are an important source of revenue for most countries. In fact, taxes provide around 50% or more of government funds in almost every country in the world.

How does each country’s tax system compare to one another? This question is tricky to answer. Since countries’ populations and economies differ greatly, measuring total tax revenue is not the best way to compare international tax systems.

Instead, using a tax-to-GDP ratio is one of the more useful ways to compare tax systems around the world.

What is the Tax-to-GDP Ratio?

The tax-to-GDP ratio compares a country’s tax revenue to the size of its economy, which in this case is measured by its GDP.

The higher the ratio, the higher the proportion of money that goes to government coffers. If managed effectively, this can support the long-term health and prosperity of an economy. According to research conducted by the International Monetary Fund, countries should have a tax-to-GDP ratio of at least 12% in order to experience accelerated economic growth.

The countries that are part of the Organisation for Economic Co-operation and Development (OECD) all meet that threshold, with an average tax-to-GDP ratio of 33.8%.

The dataset used for this graphic looks at 35 of the 37 OECD countries, since recent data for Australia and Japan was not available.

At 46.3%, Denmark has the highest ratio on the list. The country puts its relatively high tax revenue to use, particularly when it comes to subsidizing post-secondary education—in Denmark, university is free for all EU citizens.

On the less-taxed end of the spectrum, the U.S. ranks 30 out of 35, with a ratio of 24.5%—that’s notably lower than the OECD average of 33.8%. It’s also worth mentioning that the U.S. has one of the highest GDP per capita measures out of all OECD countries.

With President Biden’s recent announcement to increase corporate taxes and personal investment gains, America’s ratio could look a lot different in the near future. Demand for Disposable Masks Skyrockets in 2020

Following the World Health Organization’s formal declaration of the COVID-19 pandemic, governments around the world quickly mandated the use of face masks in public spaces.

This led to a massive demand shock, prompting factories to begin producing disposable masks at full capacity. The majority of these masks were produced in China, and in April 2020, the country reported a staggering daily production figure of 450 million masks.

In Ocean Asia’s 2020 report, Masks on the Beach, researchers developed a formula to provide reasonable estimates for the number of disposable masks entering the environment.

Given an annual production figure of 52 billion disposable masks and a loss rate of 3% (the percentage of masks that escape water management systems), the team concluded that nearly 1.6 billion face masks wound up in our oceans in 2020. This amounts to approximately 5,500 tons of plastic pollution.

These masks are commonly made of polypropylene, which easily breaks up into microplastics. While the effects of microplastics on human health are not yet determined, these fragments are incredibly common in our water supply—for example, 94% of U.S. tap water is deemed to be contaminated.

Despite their single-use nature, disposable masks are expected to take more than four centuries to decompose while in the ocean. Here’s how this compares to other items we use on a day-to-day basis.

The pandemic has extended well into 2021, and the number of disposable masks polluting our oceans is likely to continue growing.

With this in mind, various companies and organizations are beginning to search for a solution. One noteworthy example is Plaxtil, which is developing a method for recycling surgical masks so that the raw materials can be used for other products.