Chinese consumers conduct 11 times more mobile payments than their counterparts in the United States, so as we look to the future of digital wallets, China is a natural place to start.

Forecasts for mobile payment adoption in the United States remain flat for now; however, two major brands – WeChat and AliPay – offer a glimpse of what the future may eventually hold for mobile payments in North America.

WeChat, a platform owned by Tencent, is a force to be reckoned with. It’s fast closing in on one billion monthly active users (MAUs), and the average user spends over an hour on the app each day.

WeChat users aren’t just unusually chatty – there’s actually a high level of utility to the platform that North American apps have yet to match. WeChat’s wallet alone is packed with features ranging from mobile payments to ride hailing. Below is a look at just some of the features. WeChat’s wallet is packed with features that are constantly evolving, but here are some current features worth noting:

Payments in the real world
“Scan-and-pay” is widely popular in China, particularly in big cities where it’s hard to find a product or a service that cannot be purchased with a mobile device. According to China Channel, over 90% of Chinese consumers have adopted WeChat as a method of payment in offline purchases. That compares with a 32% adoption rate for debit and credit cards.

Red Packets
WeChat has seen tremendous growth of its wallet by capitalizing on China’s tradition of gifting cash-filled red envelopes (known as hongbao). In fact, the volume of digital red packets sent has skyrocketed from 16 million to 14.2 billion in only three years.

Go Dutch
Splitting the bill in a busy restaurant or pub setting can be major hassle. “Go Dutch” is a feature that allows WeChat users to divvy up a bill and pay using the app. Features like Go Dutch make digital payments an appealing option because they solve a real world problem.

Third-Party Apps
WeChat has robust third-party integration within its wallet. Functionality is so deep that users can order anything from transportation to home cleaning services with the push of a button. China’s largest e-commerce, group buy, and ride hailing companies are already on these platforms, but Western brands like Starbucks are getting in on the action too.

The mobile payments sector is becoming increasingly binary as WeChat and AliPay dogfight for market share. AliPay – Ant Financial’s payment brand – was once the undisputed leader in mobile payments, but the company has recently seen its market share eroded by an increasingly scrappy WeChat. WeChat has smartly leveraged its popularity and massive user base to get people using it as a payment tool as well.

ApplePay, which had high hopes for the Chinese market, continues to lag far behind domestic brands.

China’s central bank recently imposed tougher rules regarding scan-and-go payments, a move that Ant Financial and Tencent are publicly praising, but that may dampen the meteoric growth trajectory of mobile payments. The new regulations take aim at aggressive tactics used to capture market share from competitors, and set limits on how much consumers can spend daily using barcode-based payments.

Despite growing pains, mobile payments and digital wallets will continue to be a dominant part of the Chinese economy. The only question is, when will the rest of the world follow suit?

Why Hackers Hack: Motives Behind Cyberattacks

Video game consoles have changed drastically over the last 50 years. Here are some of the best-selling ones across the globe. In 1972, the first-ever commercially available home video game console hit the market—the Magnavox Odyssey. Players of the Odyssey had a choice between two built-in games that were stored directly in the device, and would use a joystick and dials as a controller.

Video game consoles have come a long way since then, and the console market has grown into a multi-billion dollar industry that’s expected to reach $72.67 billion in value by the end of 2022.

This graphic by Enrique Mendoza uses data from VGChartz to show the market leaders in the industry, by highlighting the top-selling video consoles of all time, as of May 8, 2022.

Before diving into the top-selling consoles, it’s worth taking a step back to touch on the evolution of home consoles to show how they’ve changed over the years.

We dug into the literature on the history of video game consoles, and found that most articles and blog posts on the topic cite nine different generations of devices.

Here’s a breakdown of each generation, and some of their most noteworthy systems:

Consoles in the first generation had pre-built games that were stored directly on the device. They include the Magnavox Odyssey and Atari’s Pong.

In this generation, games were sold separately, rather than programmed into the device. Consoles of this gen include the Fairchild Channel F and the Atari 2600.

This era’s consoles typically had 8-bit processes which allowed for more advanced graphics for the time. A few notable consoles during this gen were ​​the Sega SG-1000 and the Nintendo Famicom, released outside Japan as the Nintendo Entertainment System (NES).

Home consoles were released with 16-bit systems, meaning that audio and graphics improved even more in this era. But an arguably bigger moment for this gen was the emergence of the Nintendo Game Boy.

This generation saw the move away from pixels and towards 3D polygons. Some consoles like the Sony PlayStation started using CD-ROMs instead of cartridges, which stored more data at a cheaper cost and changed the industry.

At the start of this generation, the three major players in the console space were Sony, Sega, and Nintendo. By the end, Sega would be replaced with Microsoft as it launched the Xbox and helped popularize online console gaming.

On one side of the market, Microsoft and Sony were competing with high-definition graphics, faster processers, and different forms (Blu-rays or DVDs). But Nintendo’s motion-sensing Nintendo Wii arguably defined this generation, and the handheld Nintendo DS swept the market as well.

Consoles of this era started having increased connectivity and processing power, with full HD an expectation. It was also an extremely long generation, starting with Nintendo’s unsuccessful Wii U and ending with the ultra-successful Nintendo Switch, widely considered the first hybrid console with three different ways to play: TV mode, handheld mode, or tabletop mode.

So far, this generation has brought upgraded graphics (up to 8K resolution), larger games, and game-streaming capabilities. Devices in this gen include the Xbox Series X/S and PlayStation 5, which both use solid state drives to increase speed and performance, while Nintendo has yet to introduce a 9th generation device.

The best-selling video game console of all time is Sony’s PlayStation 2 (PS2). More than 157 million systems have been sold around the world since its launch in March 2000.

Despite the fact the PS2’s been discontinued since 2013, no other gaming console has managed to top it—in fact, the next closest actively-sold consoles, the PS4 and Nintendo Switch, are each more than 40 million units behind.

One major factor for the PS2’s success was its built-in DVD player. At the time, DVD players were very expensive, and in many places a PS2 was a cheaper and effective alternative. It was also one of the first devices to be “backward compatible,” meaning users could play most of their PS1 games on the PS2. This meant players didn’t have to buy a whole new library of games when they made the switch to a PS2, and Sony could tap into its existing customer base.

What Will it Take to Out-Sell the PS2?

As the PS4 has started taking a backseat to the PS5 in sales and promotion, the current most-likely contender for the best-selling console crown is the Nintendo Switch. Early in 2022, it was the fastest console to sell 100 million units.

With lots of hype around the possibilities of AR and VR, it’ll be interesting to see what new features come with the next generation of gaming consoles.

Will future devices ever beat the PS2’s record-breaking sales? Time will tell. But for now, the 22-year-old console continues to hold its well-earned spot at the top.

In 2021, more than 5.9 billion user records were stolen. This graphic visualizes the 50 largest data breaches, by entity and sector, since 2004. 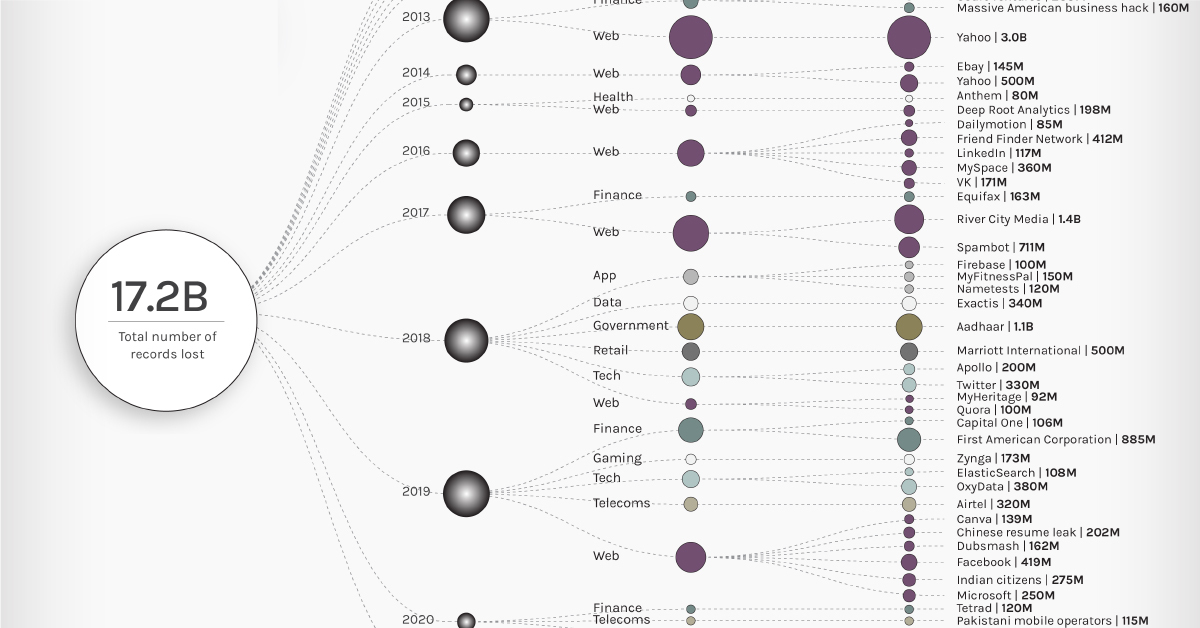