Infographic: The Official and Ceremonial Vehicles of World Leaders

The Official and Ceremonial Vehicles of World Leaders

Transporting world leaders from A-to-B is a complex endeavor, usually accomplished using motorcades, escorts, roadblocks, and all sorts of bullet and bombproof vehicles. Incorporating that level of technological sophistication into a stylish vehicle worthy of transporting and head of state is no easy task.

According to data from TitleMax, the overwhelming favorite car brand for world leaders is Mercedes–Benz, particularly the S-Class.

Many countries use luxury brands such as Mercedes–Benz and BMW to transport their heads of state, though it’s also a popular move select domestic brands for such an important and highly symbolic task. The United States, Japan, China, Germany, United Kingdom, France, and Sweden are all examples of countries that chose vehicles made by domestic brands.

The United States spares little expense in keeping the president safe, and President Trump’s Cadillac One, nicknamed “The Beast“, is no exception.

As one would expect, the vehicle is heavily armored, with doors that weigh as much as the ones on a Boeing 757. There are also some unique features packed into the vehicle, such as tear gas launchers, and pints of blood that match the president’s blood type.

While many nations fleets consist of modern luxury vehicles, some heads of state opt for vintage rides.

The former King of Tonga, George Tupou V, preferred traveling in vintage cars, such as a 1949 Humber Pullman and his customized London taxi.

An English taxi is extremely easy to get in and out of wearing a sword, a spiked helmet or spurs.

The Rolls-Royce Phantom IV is, in some ways, the quintessential vehicle for pomp and circumstance. Only 18 of the vehicles were made between 1950 and 1956, and all were purchased by royal families and heads of state. Three of these historical vehicles are still in use by the Spanish head of state for ceremonial occasions.

During special events, Chilean leaders cruise in a 1966 Ford Galaxie. The car, which has been in use for decades, was a gift from the Queen Elizabeth II.

Prime Minister of the Netherlands, Mark Rutte, occasionally ditches his Mercedes–Benz S-Class to ride his bike to meetings. That may seem unusual in some parts of the world, but not in the Netherlands where nearly a quarter of the country’s population rides a bicycle on any given day.

Related Topics:Carsvehiclesworld leaders
Up Next

Mapped: The Median Age in Every U.S. County

Mapped: Which Countries Still Have a Monarchy?

Beyond the 15 nations under the British monarchy, 28 other countries still have a ruling monarch. Here’s a look at the world’s monarchies. 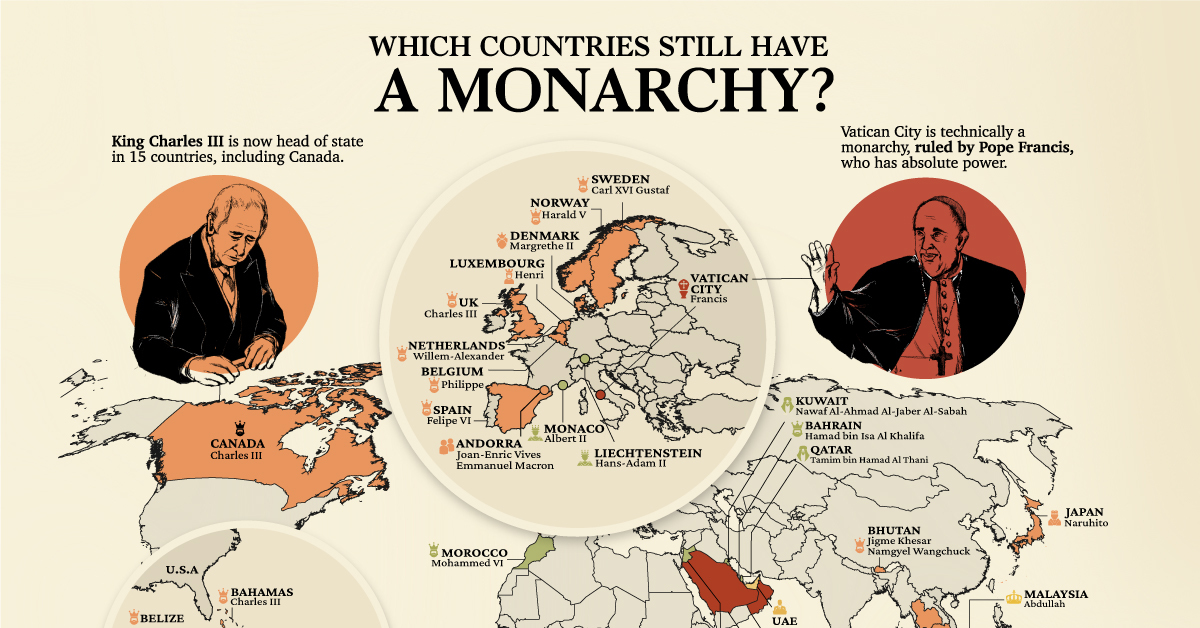 Mapped: Which Countries Still Have a Monarchy?

In the wake of Queen Elizabeth II’s death, the question of monarchy is brought sharply into focus.

However, a surprising number of countries have ruling monarchs, and in this visual we break down the kinds of royal leadership across the 43 countries that still have them.

A monarch in the simplest sense is a country’s king, queen, emir, or sultan, and so on. But before diving in, it’s important to break down the distinctions between the types of monarchies that exist today. Generally, there are four kinds:

The monarch divides power with a constitutionally founded government. In this situation, the monarch, while having ceremonial duties and certain responsibilities, does not have any political power. For example, the UK’s monarch must sign all laws to make them official, but has no power to change or reject new laws.

Here are some examples of countries with constitutional monarchies:

The monarch has full and absolute political power. They can amend, reject, or create laws, represent the country’s interests abroad, appoint political leaders, and so on.

Here are some examples of countries with absolute monarchies:

The monarch serves an overall figurehead of the federation of states which have their own governments, or even monarchies, ruling them.

Here are some examples of countries with federal monarchies:

Malaysia is a unique form of federal monarchy. Every five years, each state’s royal leaders choose amongst themselves who will be the monarch, or the Yang di-Pertuan Agong, of Malaysia and the respective states. Furthermore, the monarchy is also constitutional, allowing a democratically elected body to govern.

This is a situation wherein an absolute monarch may divide powers in distinct ways specific to the country.

Here are some examples of countries with mixed monarchies:

Kings, Queens, Emperors, and Sultans Around the Globe

Now let’s break down the different monarchies country by country:

Constitutional monarchies are undoubtedly the most popular form of royal leadership in the modern era⁠, making up close to 70% of all monarchies. This situation allows for democratically elected governments to rule the country, while the monarch performs ceremonial duties.

Most monarchs are hereditary, inheriting their position by luck of their birth, but interestingly, French president, Emmanuel Macron, technically serves as a Co-Prince of Andorra.

Another unique case is the Vatican’s Pope Francis, who has absolute power in the small independent city⁠—he gained his role thanks to an election process known as a papal conclave.

The Role of Monarchies

One of the most notable and famous ruling monarchies is the United Kingdom’s House of Windsor⁠—also known as Queen Elizabeth II’s family. King Charles III has now ascended to the country’s throne, making him head of state in 15 nations total, including Canada, Australia, and New Zealand.

Many see the benefit in having a stable and consistent form of tradition and decorum at the country’s head of state.

“The Crown is an integral part of the institution of Parliament. The Queen [now King] plays a constitutional role in opening and dissolving Parliament and approving Bills before they become law.” – British Parliament

Japan’s royal family has been a prime example of stability, having reigned in the country for more than 2,600 years under the same hereditary line.

Critiques and the Future of Monarchy

Some claim, however, that there is no function of monarchy in the modern day, and complaints of monarchies’ immense wealth and power are rampant.

For example, according to the Dutch government, King Willem-Alexander’s budget for 2022, funded by the state and thus, taxpayers, comes out to more than €48 million.

Beyond tax dollars, with absolute monarchies there is typically a lack of political freedoms and certain rights. Saudi Arabia, for example, has no national elections. Rather its king, Salman bin Abdulaziz Al Saud, stays in power for life, appoints the cabinet himself, and passes laws by royal decree.

The death of Queen Elizabeth, though, may bring about change though for many of the world’s royally-governed. Since Barbados’ removal of her as head of state in 2021, six other Caribbean nations have expressed the desire to do the same, namely:

The future of monarchy in the 21st century is certainly not a guarantee.