Charting the $1.7B Transfer of Military Equipment to Police Departments - Visual Capitalist

Charting the $1.7B Transfer of Military Equipment to Police Departments

View the full-size version of this infographic.

In the wake of countrywide protests surrounding the killing of George Floyd, questions around the militarization of police forces have taken center stage once again.

How did so many police departments across the United States end up with bomb-proof trucks and night vision goggles? Where are departments acquiring this equipment, and at what cost?

These questions and more are answered by data from the Defense Logistics Agency, which oversees the 1033 Program. The visualization above tracks the flow of military equipment to law enforcement over the past decade.

A note on the data: Much of the equipment acquired through the program is already used – and often obsolete by military standards. As well, the 1033 dataset captures shipments of equipment. Over time, items can be transferred between departments, meaning these official records may be less reflective of specific police department inventories as time goes on. For these reasons, we decided to cap our analysis to looking at the last decade (2010-2020) of transfers.

The 1033 Program was conceived in the years following Operation Desert Storm, just as America’s violent crime rate was hitting an all-time high. During this era, America’s “war on drugs” and tough-on-crime political platforms provided the impetus for the militarization of police forces around the country.

The 1033 program has been likened to Craigslist’s “Free Stuff” section, and the comparison is apt. The mechanics of the program are relatively straightforward. Outdated military gear is transferred (at no cost) to state and local law enforcement agencies who go through the application process. The equipment is loaned to agencies, who are only responsible only for shipping and subsequent operating costs (e.g. fuel, spare parts).

Law enforcement agencies gain access to a vast array of military surplus, from office supplies and thermal underwear up to armored vehicles and multi-million dollar communications systems. Also included in the mix are medical supplies and gear to aid in search and rescue operations. Since the program’s inception, over $7.4 billion worth of property has been transferred. One of the most popular items acquired by police departments is the Mine-Resistant Ambush Protected vehicle, or MRAP. Over the past decade, over 1,000 of these vehicles were transferred from the military to law enforcement agencies. This includes places like Monett, Missouri (population 9,000), which is on record as receiving two MRAP vehicles.

Night vision equipment is extremely popular as well. Items like goggles, scopes, and surveillance equipment – which can run thousands of dollars per unit – have been shipped to police departments around the country.

Of course, military surplus isn’t just about fancy vehicles and weaponry. The Meade County Sheriff’s Office in Kentucky is on record for ordering a single box of toilet paper just as COVID-19 was on the rise in that state.

Shipments at the State Level

Since the army is willing to part with excess equipment, cash-strapped police departments are happy to oblige. More than $1.7 billion of surplus has been transferred over to police around the country over the past decade.

The two biggest spenders, California and Texas, combined to acquire a total of $271 million in equipment, but looking at things on a per capita basis helps to show the states that were most enthusiastic about the 1033 Program in more relative terms.

Tennessee had by far the highest spending considering its population, with police departments in the state acquiring $20 worth of equipment per person. With the exception of Arizona, all the states that rank highly in that metric have per capita police spending that sits well below the U.S. average.

On the flip side, New York came in at a fraction of that amount, acquiring only $1.74 worth of equipment for every person in the state. Of course, it’s worth noting that New York had the highest police expenditure in the country (after Washington DC).

Who got the Goods?

Not surprisingly, state-level law enforcement agencies topped the list. For example, the Arizona Department of Public Safety received multiple airplanes valued at $17 million per unit. California’s highway patrol received the most expensive single item on the list – a $22 million aircraft.

For a more local perspective, here’s a look at the top 20 police departments by value of military equipment acquired:

Lot sizes in the U.S. are shrinking compared to a few decades ago. Here’s a look at the average lot size in every U.S. state. But in reality, modern American life has become much more compact. Over the last few decades, the average lot size in the U.S. has decreased significantly—from 18,760 square feet in 1978 to 13,896 in 2020.

While average lot sizes are getting smaller overall, there are still large discrepancies in lot sizes from state to state. This graphic by Angi uses data from the 2022 U.S. Lot Size Index to show the average lot size in every U.S. State, using data from 312,456 Zillow listings as of May 2022.

On the opposite end of the spectrum, Nevada ranks as the state with the smallest average lot size:

Generally speaking, the states with the biggest lots also tend to have the cheapest land when broken down per square foot. For instance, in Vermont, properties sold for an average of about $5.95 per square foot. On the flip side, in Nevada, land sold for an average of $82.80 per square foot—that’s the third most expensive of any state.

For example, housing supply is scarce in Hawaii, where only 4.9% of the land is zoned for residential development, and the average home size is much smaller than in other parts of the country. Not surprisingly, the average plot of land in Hawaii costs $110.86 per square foot, the most expensive on the list.

Average lot sizes remain relatively large in some states for now, but as the U.S. population continues to become more urbanized, living conditions in America could get even tighter.

Over the last century, the average home size in the U.S. has skyrocketed. Here’s a look at which states have the biggest and smallest homes. 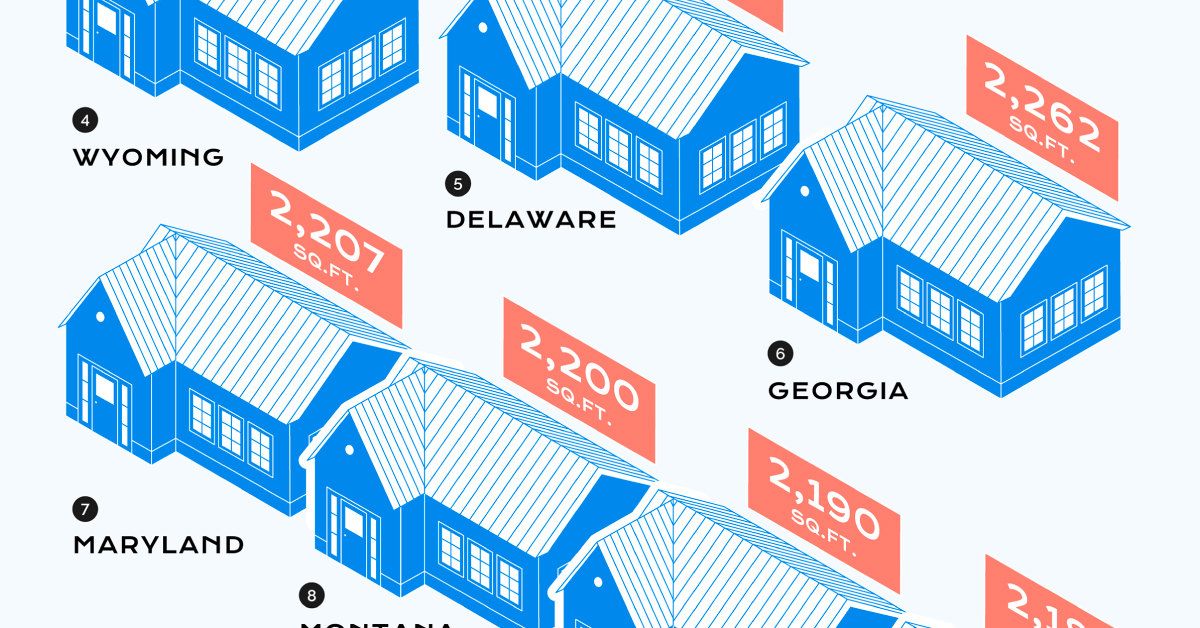 According to the findings, there was a strong correlation with the average size of a home and the age of the area’s housing stock. For instance, Utah is the U.S. state with the largest average home size, with an average of 2,800 square feet. And since the state’s average home was built in 1989, it has the third-youngest home stock of any state across the country.

This trend is apparent on a city-level as well. Here’s a look at average home size across America’s top 50 most populated cities (with available data):

The Price of Real Estate Compared to Average Home Size

The data also showed a relationship between an area’s average price of real estate and the average home size. For instance, Hawaii has the smallest average home size of any state, as well as the most expensive at $743.86 per square foot. This trend is apparent in the state of New York as well, which had the second smallest average home size. New York’s average home costs were $421.49 per square foot, the third-most expensive of any state.

Interestingly, while average home sizes in the U.S. have gotten larger over time, the average lot size has shrunk over the years.